Who would shoot a corgi with a pellet or bb gun??

We had a little emergency trip to the vet last night after a wild frap session resulted in a hurt leg ;-<   Chewey was frapping through the house and out the backdoor just as someone was coming in and he bounced off the door and into some patio furniture.  I guess he must have caught his back leg along the way because he let out some blood-curdling cries for several minutes and then wouldn't put any weight on his leg...;-/p>

So, rather than second guess myself all night about whether or not he had broken something or he should be taken to the vet I took him to the emergency vet...   So about $500 later (for exam, xrays, meds)  the good news was there were no broken bones!     But one of the things that the vet pointed out was that it looked like he had been shot with a bb or pellet gun at some point, given that the pellet/bb was still there.      The vet said bb but my other half thought it looked more like a pellet from a pellet gun.  I don't know enough about either to have an opinion.   Unbelievable... who would do that???

He's a rescue and we've had him for about a year and a half so it's been there longer than that, since I'm sure it didn't happen since we've had him (no opportunity).    Anyways, done venting....it just made me so angry.   You can see it in this image up near his spine...  What do you all think - bb or pellet? Or something else? 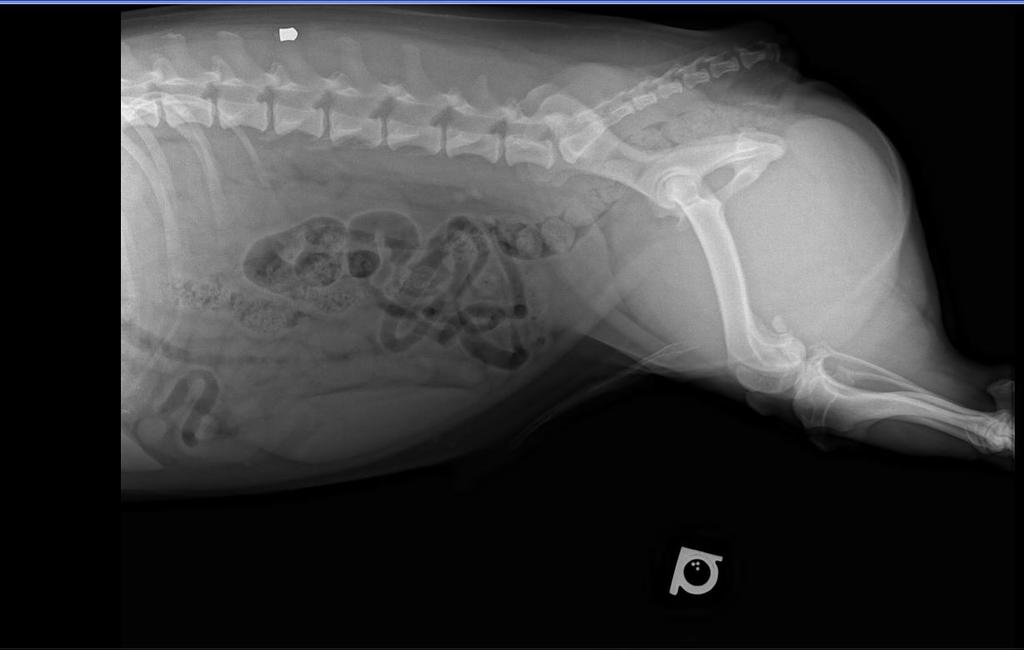 There is a kid somewhere around my grandparent's neighborhood that shoots the cats with a BB gun :/ Got my childhood kitty in the leg one time. He's lucky I didn't know who or where he was. I would have gotten him back.

Did your regular vet agree with the emergency vet?

He was originally picked up by animal control in a fairly rural area up in Northern Calif, so I guess that would explain it...   I don't know how long he had been running loose but he was definitely underweight and had worms.   The rescue's conjecture was that maybe a backyard breeder had him (he wasn't tagged, chipped or fixed) and didn't want to call attention to it so didn't claim him.  Plausible - given that he was clearly crate trained but not entirely potty trained...  So who knows.  Either way it was definitely to our gain, he's turned into a great dog and we love him to death.   He's also tagged, chipped, and fixed ;->

It doesn't seem to be causing him any pain, or certainly we've never noticed any sign of it. The emergency vet didn't seem to think it would be necessary to remove, but we have a follow up with his regular vet today to check the leg out so I'll ask him as well.

I can't believe someone would use shooting their dog as a training technique (!)

Definitely a pellet. I've actually seen a lot of xrays with both pellets and BBs in them, but usually they are in the rump from where the dog was running away and got shot. One of our beagles that came up as a stray (when I was growing up) had a lot of BB in her hindquarters, but it never caused her trouble. Then later, the dog that my folks inherited when Grandpa died was full of BB shot too. He ran in the country previously without restraint. It's pretty common, unfortunately. What is even sadder to see are the bird dogs that come in full of bird shot FROM THEIR OWNERS who use it as a form of training! This is why when Brodie showed up at our place I was so quick to confine him and keep him here--I knew if he kept wandering he would be shot.

I try not to focus on how cruel some can be. Poor Chewey, but look how happy he is now!

I'm sorry to say we do see this occasionally in our shelter dogs and cats. Probably not as often as a more rural area would. I became very fond of a shy and unhappy cat who had a pellet in her side, as well as bad mats, gunky eyes, and dirty ears. After we fixed her up she was like a different cat. Clearly these things were making her miserable. So I wonder if that pellet is causing your baby any pain? Did the vet have an opinion on that? Did he discuss removing it? I also wonder if there is ever a danger of lead poisoning in these cases.

Don't mean to scare you, but these are the things that have always concerned me when one of our animals has been shot. I don't actually know if these are really issues that you need to worry about.

And, no, I really can't understand the appeal of shooting a cat or a dog. An ex-husband, maybe. ;)

It's a pellet. My cat, ages and ages ago when I was a kid, got shot with a BB gun and almost died. Some neighbor kid shot him as he sat in the window. It took all my self control not to go after that little snot head, as I would have done some damage to him myself. I didn't understand it then and still don't.

That's a pellet, not a BB.  Doesn't look like it's doing any damage.

My guess is:  juvenile male kid with pellet gun, or possibly a neighbor crazed by incessant barking.  Either condition can result in lack of empathy.

The scary thing is the realization of how many people, old enough to be adults, have no more maturity or empathy than a 13 year-old.

I won't even guess but what a horrible thing someone did to him:( Glad he's got a good home now!