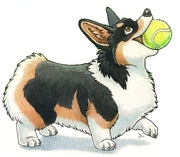 Export to Outlook or iCal (.ics)

The Illinois Corgi Picnic is canceled due to the weather.

The shelter manager wrote me yesterday and again today and stated that it is supposed to rain all weekend and that she just assumed that we would not be having the picnic this weekend.  So I wrote and told her that we will cancel.

The weather now says.... Occasional showers and possibly a thunderstorm before 1pm, then a chance of showers.  Temperature rising to near 64 by 10am, then falling to around 56 during the remainder of the day. South wind 10 to 15 mph becoming west in the afternoon. Winds could gust as high as 20 mph.  Chance of precipitation is 80%. New rainfall amounts between a quarter and half of an inch possible.

So it will be windy as well as wet.

I like Stephanie's idea of sending a donation to Friend's Forever Shelter.  I was thinking of doing that myself last night.  Then the dog food, treats, and the paper towels I have purchased will go to my local shelter next week.

Sorry, guys.  Mother nature did not cooperate this year.

Good luck on the picnic.  Hopefully the weather will cooperate.

I am going to make a small donation to the shelter on behalf of your efforts and MyCorgi.com .

Showers likely and possibly a thunderstorm before 1pm, then a slight chance of showers between 1pm and 4pm.  Mostly cloudy, with a high near 62. Chance of precipitation is 70%. New rainfall amounts between a quarter and half of an inch possible.

I am torn...  Perhaps the rain will end early.

cancel. as much as I hate to miss it. don't want to drive 4 hours to sit in the rain and cold...

They are calling for 100% chance of rain in Freeport Sunday.

I hate having car problems!  It feels like throwing money away.  Hope it gets settled soon. Maybe we will see you next year or at CORGI-CON in May 2013.

Sadly, we can no longer attend this Sunday.  Wife's car crapped out on us completely, and my car isn't exactly highway-safe.  We're glad we got to attend the WI event but are sorry to be missing out on this one.  Have fun!

I just added a discussion forum to the Illinois page titled "2012 Illinois Corgi Picnic Memories."  That would be a great place to post pictures and comments  after the picnic on Sunday.  Here is a link...

So, take lots of pictures on Sunday.  (or video)

I hope your boy's feet get better soon.  It is hard to force any dog to rest.

We will definitely post some pictures.  There will be a place on the Illinois Corgi Page in the discussion groups.  That way people can post pictures, trade recipes, and comment about the day after the event is gone from the Main Page.  That is how we did it last year.