Do you guys allow your pups on the couch?

It has been the third day since Kenny made residence on the couch. We are still trying to decide if we want him up there or not because on Sunday he just randomly started sleeping up there whenever we left to go upstairs. Our Golden is way too old to get on the couch and doesn't even bother to.

Do you guys allow your pups on the couch? Should I allow him on the couch since he is still a puppy? I'm still have to correct him on his behavior whenever he is on a blanket and he will sometimes growl at me or lunge for my hand whenever I try and take him off of it. So would putting him on the couch be a bad thing?

Also, sorry, I know I am asking a lot of questions, but what do you guys do in that situation if he growled at you? I pick him up and hold him by the scruff. That is what the lady I got him from did...

Permalink Reply by Holly on February 16, 2014 at 11:52pm
I never let Sully on the furniture including the bed because this is the first time in my life I have had new furniture and I can't afford to replace it. I sit on the floor with her most of the time, but she does sleep a lot,even when she is on my lap… I have a very high sleigh bed that I would never want her to jump down from, but she cañ't get up there. When I go out she jumps on the leather couch or recliner, but we have an unspoken agreement that she only does it then which limits the chance of her scratching or ripping it with her nails which she often does before she lays down. I am trying to find a soft elevated bed so she can relax at a higher level, but I am not even sure she cares. If I lay beside her on the floor she gets excited for awhile, then she turns her back to me and crashes on her bed. Almost like she is saying "I'm just not feeling it. Give me some space." 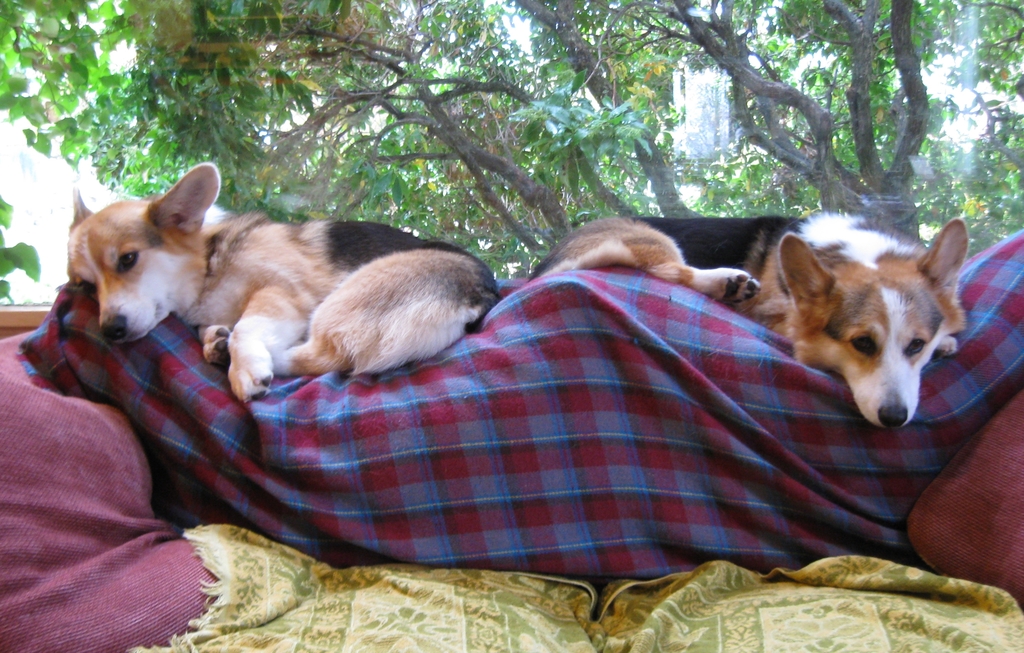 On laundry day, the dog blankets get 15 min. in the hot drier with 1/2 a fabric softener sheet (the only time I use them) to remove fur and kill parasites.

The great thing:  most of the outdoor dirt falls off their coats here, on the sofa, where they dry off, and it collects under the cushions, where it's easily vacuumed up -- once a month, whether it needs it or not.

You need to provide nonskid throw rugs on the takeoff/landing zone if you have smooth flooring.

We always keep a step-stool and nonskid rugs by the bed.

We always wipe their feet when they come in on wet days.  That reduces the dirt.

Our dawgs are not allowed on furniture, or beds.  Once upon a time, 'bout 30-40 years ago, a Sheltie, Borzoi, and Aussie were allowed to snooze on the couch...but, even then,...only with their people. 'Course, this is just giving permission for a dog to be on the furniture.  Which often became a problem.   I became tired of the extra cleaning, and all dawgs since have had their own individual nice/cushy beds ever since.

That said, young puppies often get VSP (Very Special Privileges), in that they are allowed to be Lappers (not directly on the furniture) during morning Coffee Mate Time. Our new little Corgi Izzy enjoys this "personal time" with me, making goofy sounds for more attention (which he gets...Who's trained Who?!).

You didn't give the age of your dog, but it sounds like he has already knows how to be Alpha Everything? Changing behaviour in an older dog may take some time.     I would never lift a dog by the scruff of its neck, but I'm only on the first Corgi pup. That's kinda like relocating a rattlesnake, and not making any attempts at TRAINING dawg? Does the dog ever learn zip? NO.   Can you go back to basics, being on a lead, and the rest of "free time", to convince your pup that YOU are the Alpha Dog?.  In the meantime, couch privileges are taboo.

The sofa here is just a little too high for Cassie to get up on by herself. I've not encouraged her to go up there because of concern about her jumping or falling off. However, when I'm going to be on the sofa for a fairly long period -- to work on the laptop, for example, or to take a nap, I'll spread a throw for her, pick her up, and set her on it.

She doesn't seem to be possessive about the throw or cranky about being told it's time to get off.

Yep, we let Eevee on our old couch downstairs. We plan on replacing this couch eventually (got it from husband's grandmother), and we know it isn't a good habit for her to get into. She will whine and jump until we let her up, but once she is on the couch she is sleeping. If she did anything other than sleep on our couch, I would probably deter the behavior but so far it seems to work out fine.

We allow them on the sofa, but even so, SId prefers the cool tile by the front door, Copper likes one of the many dogs beds we have scattered around and Connie just wants to be at my husband's feet. Bruce, at 19, is too old to be able to get up onto the sofa.