Maddie's wheels arrived about 10 days ago.   We ordered her cart from Doggon' Wheels and have been very impressed with the quality and ease of use.  It has a removable neoprene "saddle" that can double as a rear-end harness (though she doesn't seem very impressed with the harness idea).  It is custom built, so while some assembly is required, it fits when you put it together.  The wheels themselves are air-filled and fairly fat, so they can handle all kinds of terrain.  More importantly, they turn very easily for maneuverability.   And they are angled out slightly, which makes the cart more stable and also makes it less likely she will run over her own back feet.  It comes with rear stirrups, but we are not at the stage of needing those yet.  Of course, without stirrups, foot protection is a must and Maddie swears by Pawz dog booties.  Size medium (blue) even though the packages says she should be small (red).

Day 1, we put the cart together and put her in it.  She looked horrified.  She went backwards (this is apparently a common reaction).  She didn't want to move, even for treats.  We sort of helped her along with the harness, but then decided a tug toy was a better way to get her moving.  She went a few steps forward a couple times and tugged on her toy, and we were happy with that.  Yay! 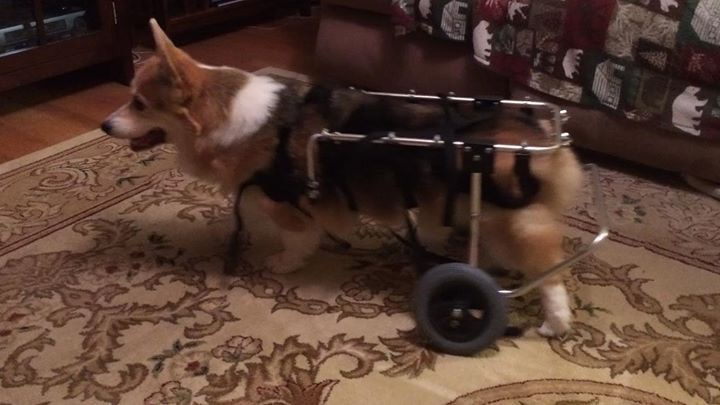 That was a Friday evening.  Saturday morning, we carried her across the street to the park, with Jack and some frisbees.  There was lots of hesitation and more going backwards, but she was so excited about the frisbee that she forgot about the cart and ran and played.  She can't see very well anymore (poor girl is a bit of a wreck!) so she doesn't fly after thrown toys, but we toss it in front of her and she trundles after it.  Progress!  I was so happy to see her play that I must admit I cried a little. 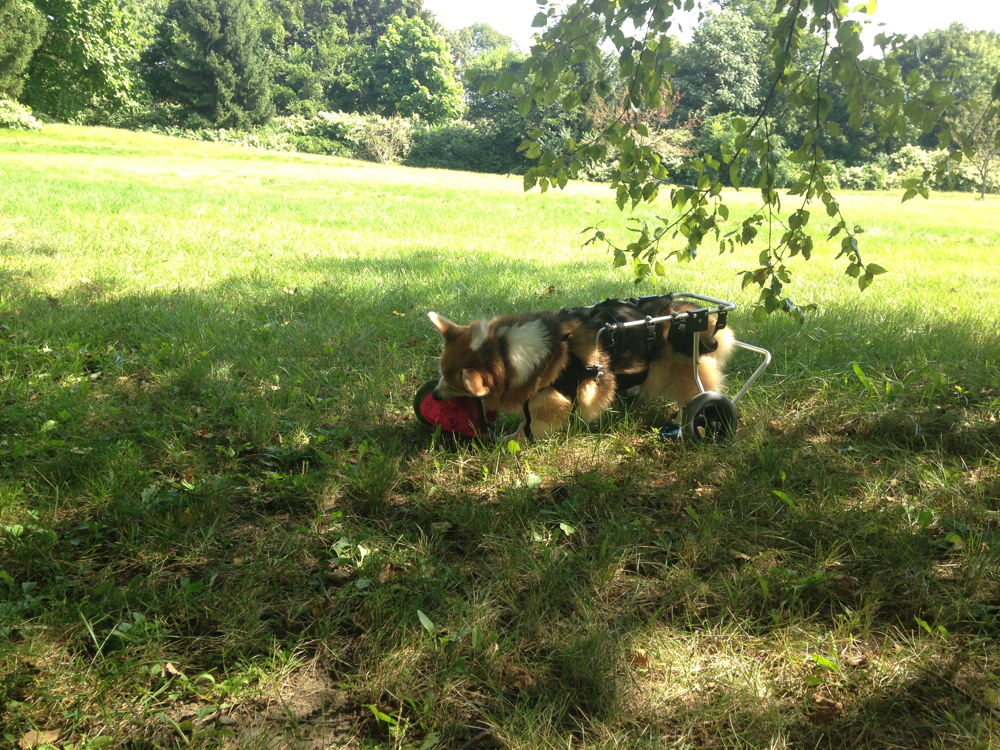 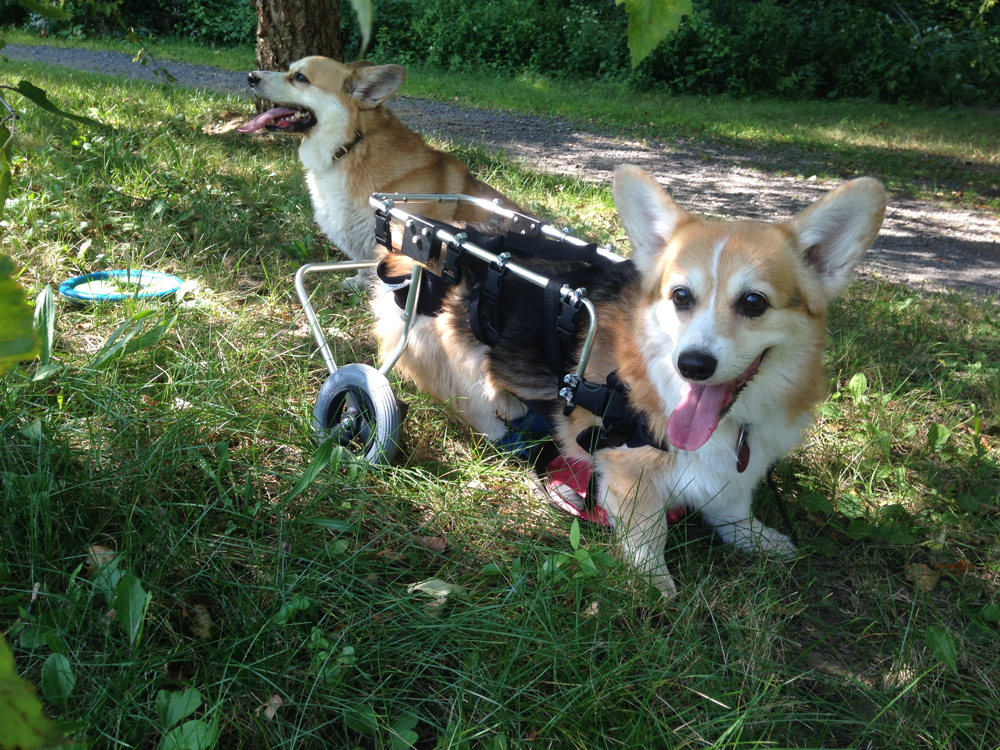 We spent the rest of the week working on getting her used to it.  Every time we put her in, it's like she's never seen it before and we have to start over with coaxing her along.  Once she gets moving, she does great.  By Friday night we were ready for a longer walk.  I drove her over to the main paved path in the park, my husband walked over to meet us with Jack, and we went all the way around the big loop.  She looked so happy! 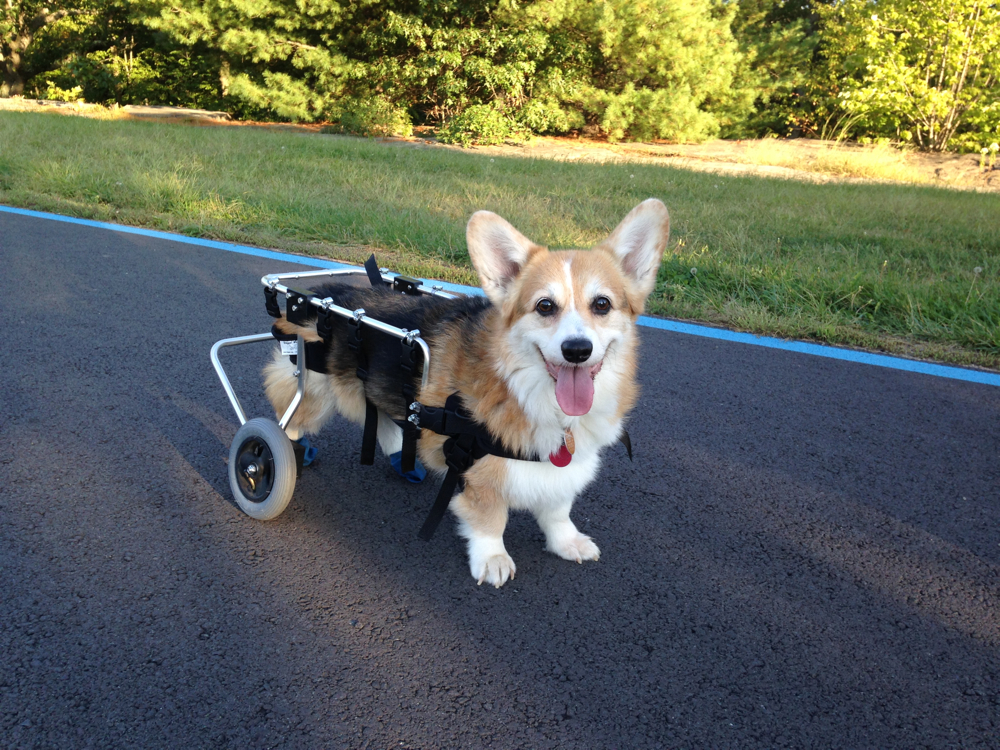 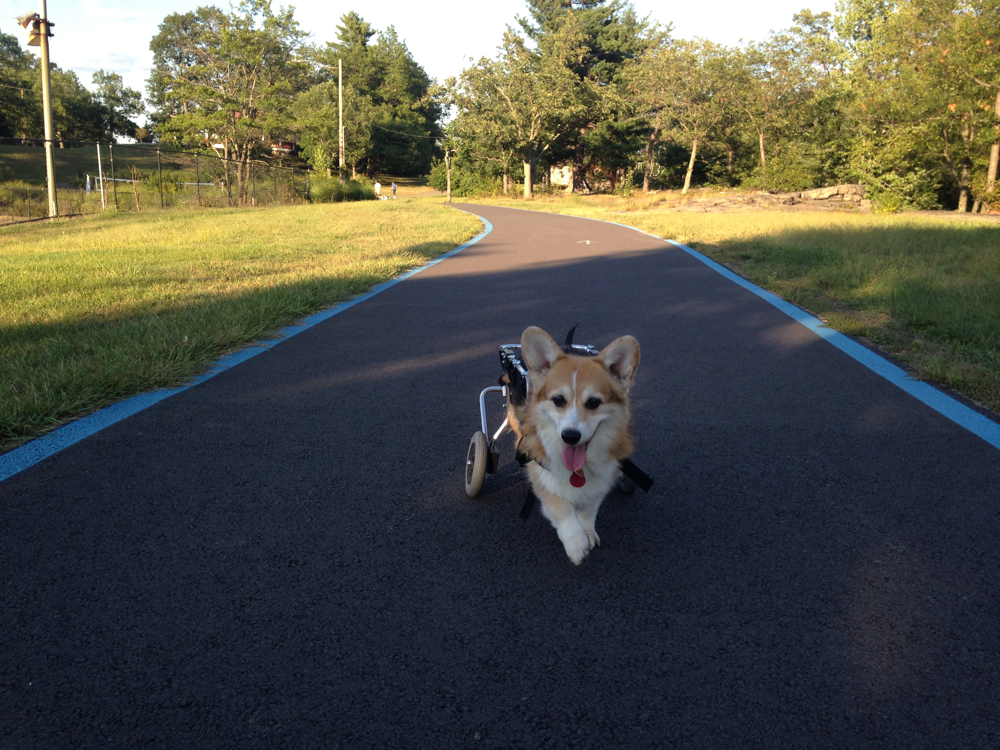 Yesterday was rainy all day so she rested up, but today we took her to a different park about 20 minutes away.  She remembered that she still IS a Corgi, cart and all, when she ran off across the grass to eat some apples someone had dropped near a picnic table.  She still looks at us like we are a little nuts every time we put her in, but she warms up to it a little faster each time.  Good girl Maddie! 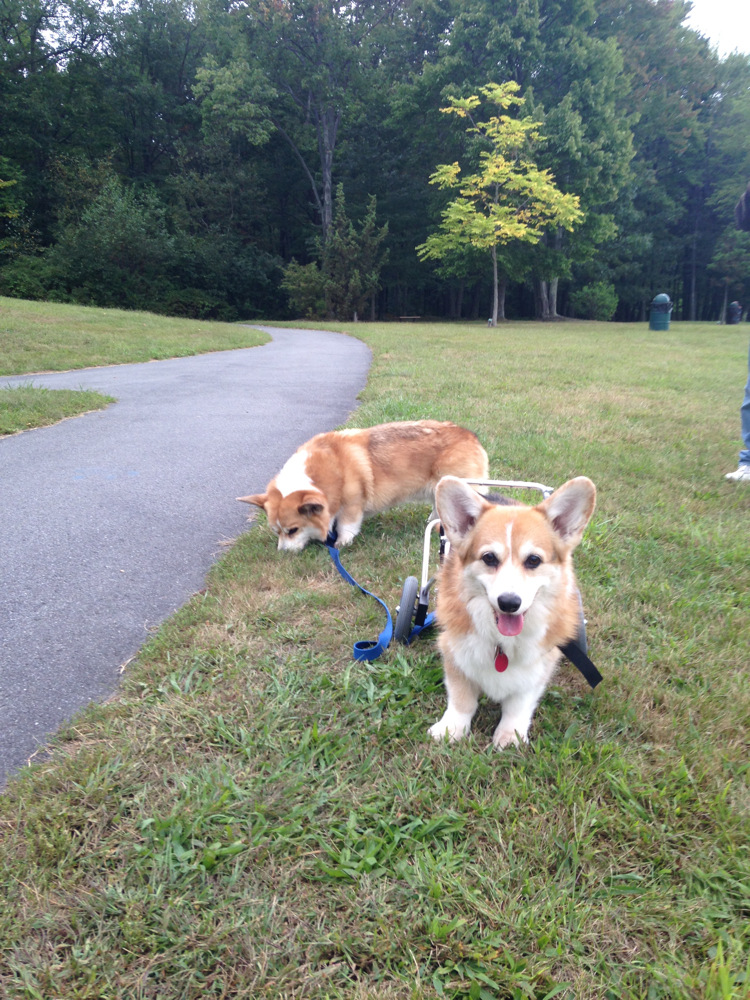 Jack has been a trooper and the wheels don't bother him a bit, though he has learned to get out of the way when she comes running, because she has no clue where they are.

After so many months of watching her slowly lose the ability to do things, one by one, it's wonderful to see her get out and have fun again.

She looks so happy!  She doesn't care that she is using a cart, she just knows she can now go easily where she wants.  That is funny about "forgetting" their training.  When I had to switch Max from collar to harness because of the IVDD in his neck he realized that not listening to me didn't get a quick correction like it use to so know he just tries to go where he wants and will sit down if I try to correct him.  Stubborn old corgi!

It really makes me happy to see her so happy!

Yay for Maddie! Her smile in the fourth pic is so sweet! All of them are, actually, but that one is especially sweet.

so happy to hear Maddie is getting around with her wheels and adjusting!!! Love the pics <3 :) :)

Beth, she looks so great.  I am so glad that she is adjusting and can enjoy running around like a CORGI!!!  She looks like a trooper!  Good luck helping her be as mobile as she can for as long as she can.

Maddie looks great with her new wheels!! Thanks for sharing these beautiful pictures! :)