After losing our girl Dee Dee on November 3, 2012, my husband and I were devastated.  But we knew we needed to get another dog since both are so totally dog people, and I (espcially) missed the companionship.  We have decided that the second dog will definitely be a rescue, and so we visited Sacramento SPCA when we felt we might be ready.

Sacramento SPCA has a program called "Pet Request" where you pay $50 for 90-days, and they will look for a dog of your preference.  You just need to fill out a form on what kind of breed (mix) and temperment you are looking for.  You can specify the age and size you prefer as well.  Although we included Corgi as one of about 8 breeds we were interested in, we didn't expct any Corgis to come in to the shelter.

We wanted to get something a bit smaller than Dee Dee so it would be easiter to travel.   When we first visited there, we were shown a Terrier mix who was very cute and cuddely.  So we put her on hold, but she got kennel cough, and was not allowed to be released for at least a week.  My husband asked the staff if they had a Corgi, and to our surprise, the answer was yes.  But she said that there are 3 holds already, and the dog was also sick with kennel cough, so she didn't bring her out.

We went to visit the Terrier mix again in a week.  She was still sick.  We asked about the Corgi, and she said now there are only 2 holds, and she asked if we wanted to be placed on the 3rd hold.  We wanted to see the Corgi first, but we said yes anyway.  A few minutes later, she brought in the Corgi.  When I saw this Corgi walk up to the interaction area, my heart tingled.  Part of us didn't want to get a Corgi because it would remind us so much of Dee Dee, and we thought it would hurt too much.  But it was the opposite.  I just couldn't help smiling at this shorty dog.  She was a bit shy, but her ears were pulled back, and her stubby tail (and her butt) were shaking like crazy!  She is 6 years old, and a bit older than we originally planned (1-3 yrs old), but heck, she was so cute, and a Corgi!!

We were sold.  We became the 3rd hold for this Corgi, and we left the shelter.  A few days later, SPCA called, and said that first two holds dropped, so now, we are the first hold on this Corgi!  We said we will be there to take her home!!

Her pervious owner did not walk her.  She is not leash trained, and her paws were still pink and soft!  6 years old, and do not know how to walk on leash?!  I understand if she was a stray, but she was owned by someone for 6 years!!  That's changing now.  We walk her a lot, and her paws are now getting a bit hard and darker.  The owner surrender paper said she was left alone up to 10 hours a day, but had an access to a doggy door.  She may have had an access, but I don't think she'd ever used a doggy door.  The paper also said if you left her alone for long, she would have an accident.  Maybe she didn't use the doggy door, so she had an accident inside the house?  We tried to teach her how to use our doggy door (between hallway and bathroom), but she was too scared of the flaps.  Previous owner supposedly was getting old and couldn't care for her any more.  Well, good!  Now, we get to have her!  She's a bit chunky but she is not as food crazy as Dee Dee, so she must be chunky just because of lack of exercise!  We hope to get her trimmed down soon.  :)  I don't think she was left alone for 10 hours... she seems to have some sort of anxiety (separation anxiety) when we leave.  She's now in crate when we leave her at home, but she seems to dig when we leave.  She sleeps at night in crate now, but she doesn't dig when we are home.  Hmmmm.  Another lie by previous owner??

Her tail.  It waggs so much.  We sometimes call her motor butt becuase her stub seems to swing around along with her butt when she shakes.

We were so lucky that a Corgi was at Sacramento SPCA at the perfect timing.  Maybe Dee Dee helped out and showed us (and Brandy) a way.  Maybe, maybe not, but we are happy to have this new addition to our family. 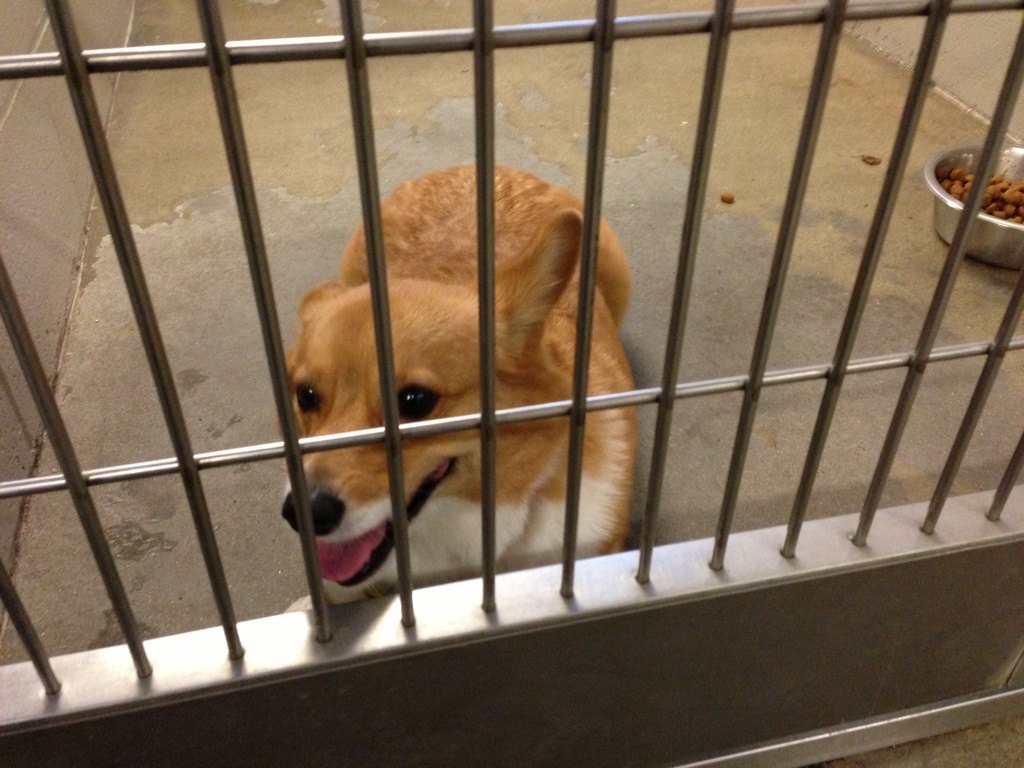 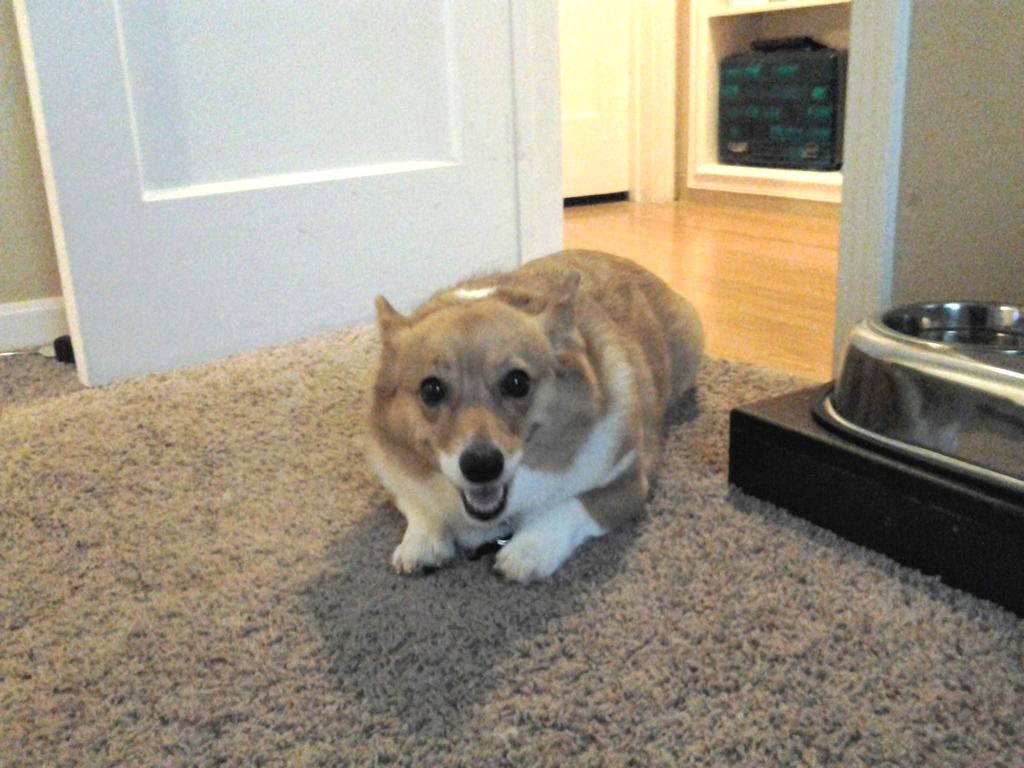 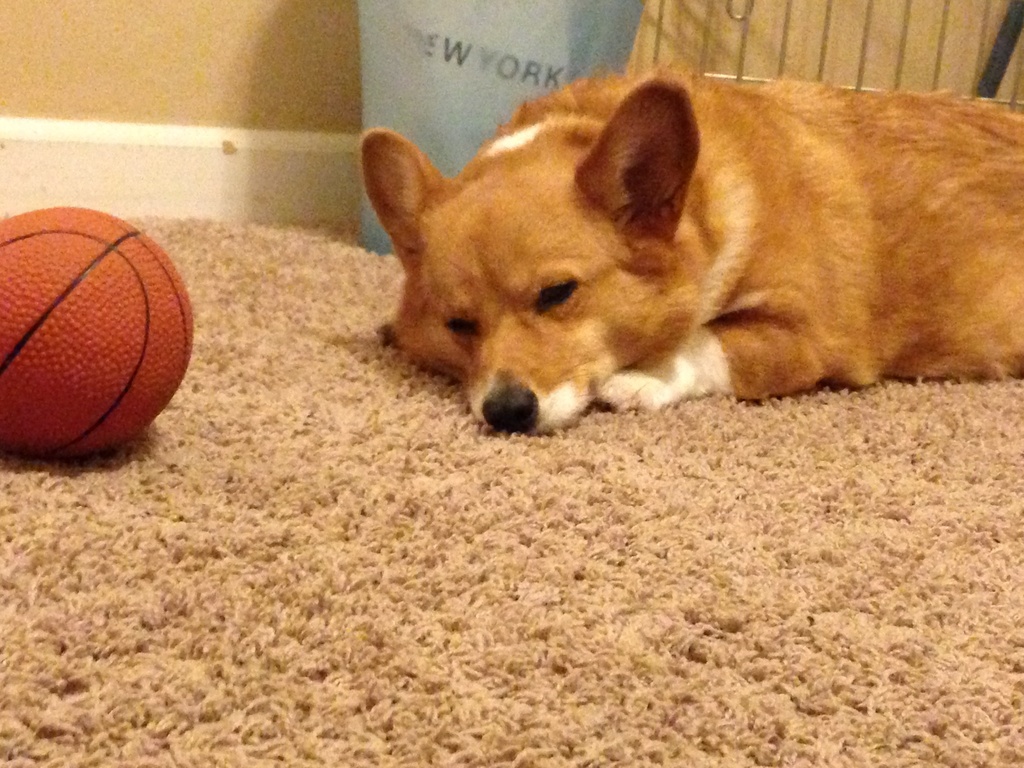 What a great Christmas story! Congratulations!  And what a lucky break for Brandy! ♥

She's beautiful.  Congratulations.  She probably will be less anxious when she's more settled in.

She is slowly adjusting to our life.  She finally started eating both breakfast and dinner, but she still wants me to sit nearby.  I'm not used to that since Dee Dee was more protective of food, and wanted me far far away from her food once I gave it to her.  Brandy eats slow, and picks up a few pieces of kibbles, then move them over to the carpet, and finally eats them.  I hope I can get her out of that habit just in case I have to give her can food...

She is walking a bit better now.  Using harness seems to work better, but she still doesn't like it when we put it on and take it off.  She rolls over to her back and show us her tummy... which makes harder to unclasp the harness.  She is very very sweet and I'm glad we have her now.

We got Dee Dee when she was 8 weeks old, so we are also learning things or two about adopting adult dog.  Patience seems to be the key for all of us!  :)

She is beautiful!  Thank you for for taking her in as a rescue and giving her a loving home.

That motor butt is because she knows she finally found her people! Dogs come into your life because you need them to at that right time. Congrats!

I am so happy she found you!  I saw her on SPCA website and prayed for good people to get her.  After seeing the lovely photos of Dee Dee and your family Brandy is in great hands.

Congratulations to all!  Merry Christmas!

In the last picture she looks so comfy and happy in her forever home. She is so beautiful!

We are learning so much about Brandy... including her separation anxiety.  We've been crating her while we are out and when we go to bed.  She's totally fine in the crate until the morning.  But when we leave, she starts digging.  Inside the crate, we have her bed in the back part, and in the front part, a cushion.  Everytime we come home, the cushion is turned upside down, twisted, and looks like she's been digging.  Not to the point where the cushion is torn.

We recorded her yesterday while we left for about an hour... and of course, she was digging.  It started right after we left, and kept on going.  Dig dig, stop and pant.  Dig dig, stop and pant.  We leave radio on, so it's not that quiet in the house, but she's too smart to know that we are not there.  We are planning on contacting trainer from our vet or SPCA soon, probably after the holidays.  Hope she understands soon that we won't leave her forever like her previous owner did...  :(

Permalink Reply by Wilson Waddlepants and Joyce on January 1, 2013 at 2:02pm

I am SO happy to hear you opened your heart to a new Corgi and Brandy has joined your family.  That is just so WONDERFUL.  What a perfect match of companionship.  You needed her and she needed you.  We hoped to rescue a Corgi after our Winston died on August 12, 2012, but every place where we inquired required a home without cats or other dogs.  We have two cats and two other dogs.  So, on November 23rd we brought our new little puppy home.  We named him Wilson and having him has brought us so much joy.  I thought I was going to feel guilty like I was trying to replace Winston but I found that when I look at Wilson it actually doesn't make me think of Winston, and as sad as it makes me feel there are actually days that go by now without me thinking of Winston.  I miss him so much, and now while I'm typing this I'm crying.   The point is, having a new dog really, really helps a LOT.   We'll always love and miss our beloved Winston, and because we lost him so suddenly and unexpectedly, when I think of him, at least for now, I still feel a deep sense of sadness.  I often wonder how I can replace that sadness and loss with happiness and good memories.  I really need to work on that.  When I look at Wilson . . . happy happy happy . . . I think of Winston, sad, sad sad.   I guess I just need an attitude adjustment.

Brandy is a beautiful red headed Pembroke.  Winston was a red head too. 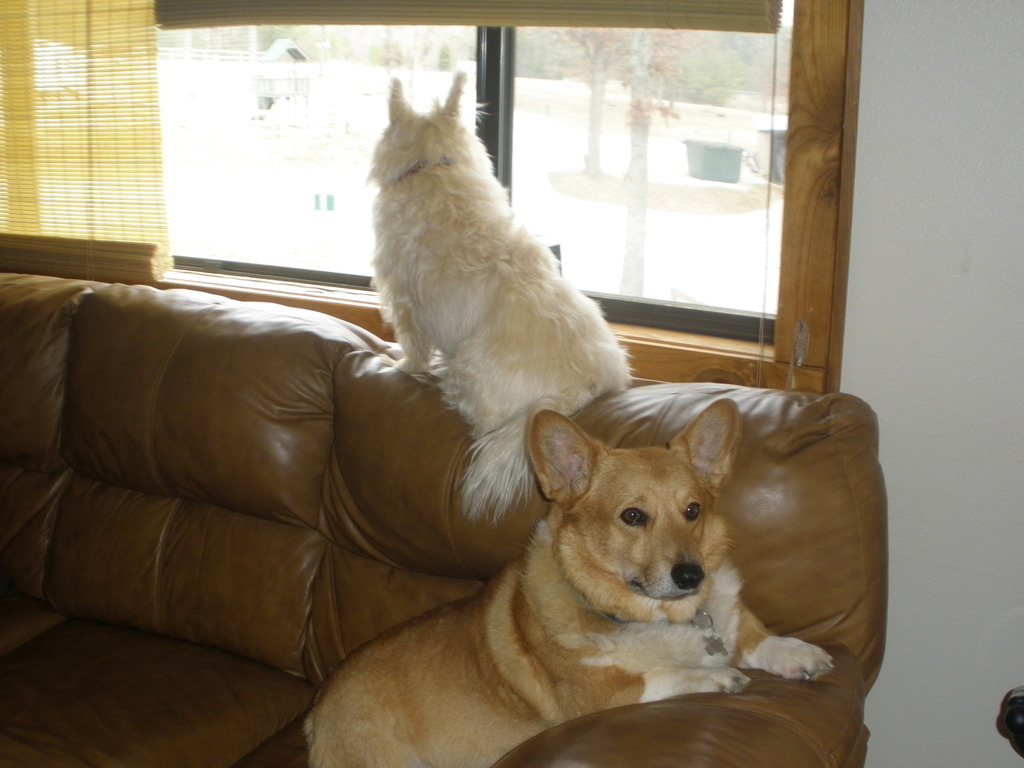 She looks like such a sweet girl.  I am so glad you happened there at the right time to give her a good life.

Permalink Reply by Emily & Scout on January 2, 2013 at 10:23am
She is adorable! Congratulations! Hope she is a great addition!