It looks like my husband and I, along with our two corgis will be moving in the next month to Louisville KY. We're both excited, but anxious about moving into an apartment with our corgis (Louisville is an expensive place compared to where we are now)! We're not worried about our Lola moving there and being OK with an apartment, but we're concerned about Hank. He's just a puppy, and likes to talk, but I'm worried about how that talking will affect our neighbors. We take him for lots of walks…

A few months ago, my hubby and I decided to add to our Corgi family. Hank was born on 12/29/13 in Fredericktown, MO. We were anxious to see how Lola (our six year old female) would react to a new puppy. She's made amazing process over the last 15 months that she's been with us, even to the point of vocalizing a little bit (never thought I would meet a quiet Corgi!).  I can't wait for his ears to come up! Should be any day now!…

I really intended to keep up with our Lola Bear's progress from the start, but I am admittedly really bad at finding time to sit and type. Bear in mind, that most of this is just a yearly update, but I do have a legitimate question for those who have a multi-corgi home.

In April, Lola had a Grand Mal seizure. That, I believe, was the scariest part of our year thankfully. It seems to have been an isolated event that didn't seem to have any stimuli (no toxins were around and there were…

I need some advice... My husband and I brought Lola to my parents house for the weekend to visit. They have a Tibetan Terrier (about the same size as a Corgi, just a bit taller) female that is 12 years old and very friendly named Madison. We were trying to figure out how to introduce the two without any issues. Lola's been so calm with other dogs at the park and with humans I didn't think there would be an issue... I was really wrong.

Any time Madison gets within 5 feet of…

I know I'm a worry wort, so I should have known it would all be OK. Lola came back Heartworm Negative! I almost cried harder in joy about that than I did when they were trying to take her blood. Took 3 syringes and both front legs to get it done.

We found out she DOES have Hook Worms, but that seems to be easy to treat. Three packets of medication over 3 days and then her heartworm/intestinal worm/flea preventative. All in all, a VERY healthy girl!

Lola seems to have adjusted fairly well to the family! I'm a little anxious for tomorrow. I emailed back and forth with Lola's foster mommy and found out a little bit more about her background. Apparently she was more of a stray than a "puppy mill" dog like we were told. It doesn't lessen our love for her, but it does concern me a little bit. We have a vet appointment tomorrow morning for a basic checkup and for her heartworm test. I wasn't worried about this before now, but I'm getting…

I must say, I thought I would have made this sooner, but new dogs really do make you wonder "where did all my time go?" 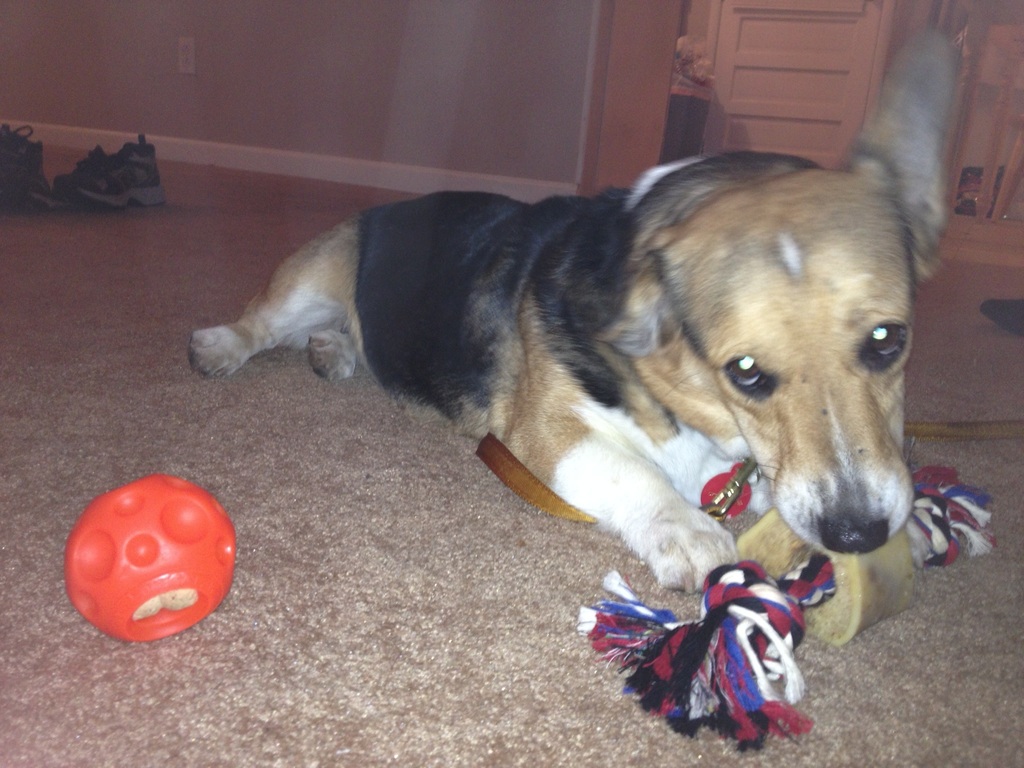 Brian and I brought Lola (formerly known as Sweet Pea to the lovely ladies at the Blue Moon Sanctuary in Camdenton, MO) home from her foster family on Friday last week. It was wonderful to get to spend the weekend with her and get to know her.…