K9 Advantix or Frontline Plus

I just bought 12pk of K9 advantix from pet-med because i heard they repel and kill ticks, lices, fleas, bitting flies, and mosqitoes. I applied it on Romeo yesturday afternoon and so far so good. But the areas where I applied his hair is wet and greasy looking. Now its making me wonder if i put it correctly. Also I just found out that many dogs got side effects from it K9Advantix. T__T

I was wondering if anybody who uses K9 can explain what…

My baby Romeo is turning 1 next month =). Anyway Romeo fell down the stairs a while ago. He didn't get hurt and it wasn't his first time. But this time I think he really got scared. Because now he is scared to go down the stairs. I always have to pick him up and carry him down. How do I make him not scared anymore? I tried putting him on the middle of the stairs and calling him down, but he starts whinning and panicking and make me eventually pick him up again.…

I don't know why but Romeo has been farting alot lately near me. He doesn't make any sounds but HE def FARTED. IT SMELLS AWFUL!! He doesn't even look at me when he did it. He acts like nothing happened, but once in a while he farts and leaves the room. Is Romeo the only dog who acts like this?

very unique but weird. how about your corgis?

Romeo has one blue and one brown eye.
Romeo ear is slightly bigger than another corgi we meant.
Romeo has only 9 nails. His right paw thumb nail doesn't grow. It is it just me or is romeo handicap. LOL

I was wonder if your corgis are hmm special and unique like Romeo ;D

Im having a really hard time brushing Romeo's teeth. Im scared he might get a plaque build up because i can never brush his teeth well. I like to know how often does everyone do it and how?~ Romeo always run away as soon as i grab his tooth brush or the finger brush. He also will move his head around like crazy

i was petting romeo and found a bump with lots of dry skin on it. So i decided to brush him. After i brush him and checked the brush i saw lots of dead skin on the hair. What should i do? should i go to the vet? Or should i change his shampoo. Any reccommendation.? Did anybody went though this?

my corgi Romeo got attacked by a cat! 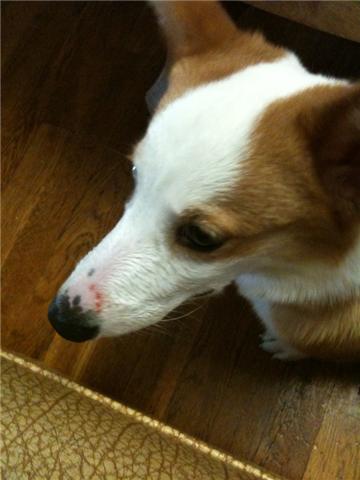 Okay Romeo and i were walking at cunningham park and decided to head home. On our way home a white cat that was hidding under the bushes attacked ROMEO! That stupid white cat scratch Romeo's nose. He has a big red scar near his nose. I am VERY PISS. I rang the bell where the white cat was. The lady said it was their neihbors cat. I rang thir bell. They did not open the door. I left a message telling them what happen and to call me asap.… Continue

PUPPY FOOD TO SMALL & In charge

So, im getting Romeo's paw print tattoo today. The problem is that I just can't get romeo paw print on a paper. Anybody have a good idea? i tried dipping his paw in water than color paper, but it looks like a small puddle. The only perfect paw print he makes is when he steps on his urine on the wee wee pad and walk across the pad. *sigh* Im also unsure to get his paw on the back of my neck or the ankle?

Romeo is only 4 months old. He isn't neutered, and i don't want to neuter him yet T___T. Is it okay to neuter him after he has babies? Like when he's 3 or 4?

Romeo likes my hands more than his toys?!?!

Romeo is only 4 month old. He's keep bitting me on my feet, hands, and ESP HAIR. what should i do?!?!

when should i start training Romeo?
Should i get a trainer?
Should i get a private trainer? petco training?
Romeo doesn't pee or poop outside but inside. what should i do?
How many times should i feed ROmeo? he is 3 month old.
is dry beneful pup food okay? because when i went to google and search about beneful some people said that beneful uses artifical meat and veg.

i got romeo last week. I am potty trainning him, but what is the best method to train him fast. I live with my parents, and i got romeo as a birthday present from my boyfriend. My parent loves ROMEO but not when he pees or poop everywhere BUT the wee wee pad. He pees at the wee wee pad hardly ever. No matter how much i say no, 5 min later he pees there again.. Today my mom said to spray clorox becuz one of her friend has a dog. And she told her that they hate the smell of clorox so they won't… Continue