So little Dax went in for his allergy testing today at the Veterinary Referral Center of Colorado, a specialty vet hospital in Englewood, CO. Strait off the bat we were both excited to be there. He greeted everyone behind the desk and acted as though he owned the place, even though he had never been there before. They were all very friendly and welcoming. We ended up getting there a bit earlier than I expected so we ended up waiting to see the Doc for about 45 mins. (maybe only 30 mins. I was a bit nervous/excited). We socialized a bit with the other patients in the waiting room, which helped kill some time.

Finally, it was our turn. The vet tech brought me into a room and asked me all the usual stuff about his history, what i'd done in the past to help his itching, what meds. he's been on, ect. Finally we meet the Doc. She seemed a bit surprised/impressed about how I knew all the answers to her questions, and how I had even typed up a sheet which said all the foods/meds. he's been on in the last few months. After all her Q's were A'd she decided that because of his history, age and health he was the perfect candidate for allergy testing!!!! YAY!!! I've been waiting to do this for so long!

So, they took him back to wherever they performed the testing and I waited for them in the lobby. After only 30 mins. the Doc. came out and gave me a sheet that said everything he reacted to! I was expecting to wait for at least and hour or two! I was so happy he didn't have to stay sedated for long! She explained the results and answered all my questions. She said it would be another few minutes before Dax would be awake enough to walk out the door, so she asked if I wanted to take a tour of the facility. YES!!! I said! What a generous thing to do! The place was huge! And all the staff greeted me as I walked by. I got to see the surgical suites, where they keep the animals who are recovering for their treatments, the whole place!! It made me feel so much better about where I took him for his testing! Finally, the tech that gave me the tour took me to where Dax was waking up. His side was shaved and covered in little blue dots, but he was done with the testing!! HURRAY!!!! 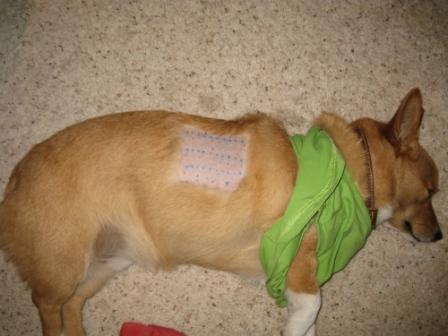 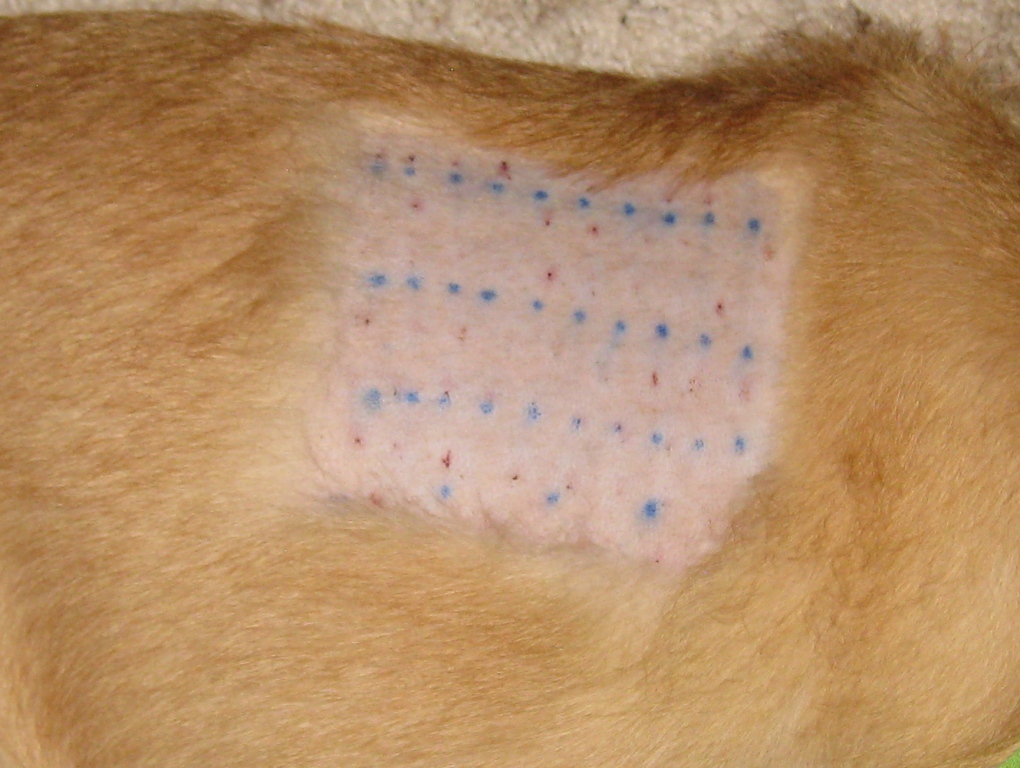 We made our way back to the lobby, slowly. The poor little man was still a bit drunk from the sedation, but he was awake enough to say bye to the front desk staff, even when his back end became a bit too wobbly to stay standing. Haha!

So the testing revealed that Daxter is allergic to :

Cattle/Beef (we have a herd of Longhorns)

and a few other things! I am so relieved that we were able to do this, and in such a nice facility too! The next step is to begin Dax on his Immunotherapy (allergy shots). I can't wait! Hopefully it will help him, especially this fall, when his allergies are usually at their worst!

Thanks to everyone for your help and concern! The little man and I are very grateful for all the advise people on this site have given us within the last year or so. I only hope that this and my fututre posts will help others who may be having the same allergy-related frustrations as I had. And thanks to VRCC for being one of the best vet hospitals I've ever been to! 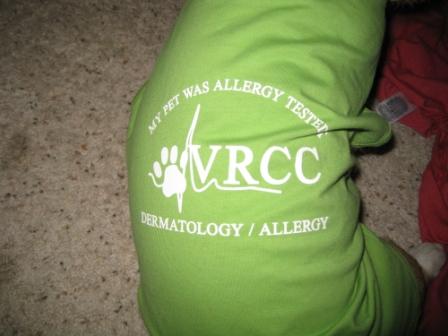 Comment by Samantha, Daxter and Seeka! on March 1, 2011 at 10:18am
yea, they tested everything. they even tested with human epithelials! glad my dog isn't allergic to me! lol

Interesting, I have one that has a reaction when we go camping, to the point that she has stayed home on a few trips. We kinda told ourselves it was weeds, but now I'm surprised how many your dog did react to

I bet you breathed a Huge Sigh of relief to finally know what bothers Dax!

At least we don't have as many fleas here in Colo :) (that is the 1st time I've heard of dogs being allergic to fleas. And beef. and cats).

How reassuring to know of the high success rate of the treatment!! Thank you for sharing your experience...

Comment by Sam Tsang on March 1, 2011 at 9:38am
Thanks Samantha for the update! It really helps others to see how to get to the root of the problem instead of switching food blindly.

Comment by Jennifer Markley on February 28, 2011 at 8:16pm
That's a great success rate.  Keeping fingers crossed that they work that well, and that he can start to live comfortably!

Comment by Bev Levy on February 28, 2011 at 8:11pm
I never took pictures of Sparty's testing but that what it looked like. It has been many successful years for us and I wish the best for you and Dax!

Comment by Samantha, Daxter and Seeka! on February 28, 2011 at 7:41pm
The vet told me that the injections may take anywhere from 3-12 months to really take effect, but once they do, there is a 70% success rate! I'm very hopeful that he'll show improvements and gain relief!

Comment by Jennifer Markley on February 28, 2011 at 7:31pm
Very interesting!  I used to work for an allergist.  It looks like the testing is the same we used on humans.  What's the percentage of success?

Comment by Samantha, Daxter and Seeka! on February 28, 2011 at 6:46pm
the blue dots indicate where they injected a potential allergen. he was tested for many things....61 to be exact. they tested everything: dusts, mites, animals, grasses, trees, weeds, molds and insects.

Comment by Rebecca Marie O'Bryan on February 28, 2011 at 6:20pm
im so happy for u two! thats awesome u finally found out exactly what he is allergic to. i have been wondering how he was doing =P lol but i do have one question, why so many blue dots??