Waffle was a NIGHTMARE yesterday. I just... I don't even know where it came from! I know the honeymoon period with him acting like an angel had to end sometime, but DAMN. He was so irritating allll daaay. It would have been better if my sinuses weren't trying to smother me. I basically slept until 3 PM because my head was fuzzy and full of snot. So, Waffle slept with me... mostly. I woke up to a weird gnawing sound and find out he's chewing on my dresser--with two perfectly good chew toys right next to him. I shove one in his mouth and go back to sleep. I took him outside around 9, then again when I woke up at 3ish. I let him out and he found a dead baby bird and started rolling in it. Then he tried to eat it. I figured he didn't have to pee because we were out for a while and so I take him inside. I'm getting ready for class and I go upstairs and he pooped on the carpet. T_T" I put him in his crate, go to class, and come back where he's sitting happily on my bed (THANK GOD.) So I take him out and he doesn't pee. We're outside for a LONG time and he's trying to swallow everything in sight. I'm so glad I taught him "Leave it" because I must have used it 100 times yesterday. We come in to fix his food, and he pees in the foyer. Sigh. I take him out again and he doesn't pee. He eats. He starts harassing the cats-- Torry smacks him and Tober doesn't, so he thinks Tober likes him and starts chasing her. This goes on for a while with me trying in vain to stop it. I let him out again to pee, and he runs straight to the dead bird and starts rolling again. I go to pick it up when Dad comes home and asks me what I'm doing. He opens the gate to get a flashlight to help me out, when Waffle trots through the gate and I'm following him slowly. He poops in the neighbors yard, I pick it up, and then he continues on his leashless stroll with me calling to him and trying to get him to come by promising him cookies and love. We did a circle around our block and he ended up back in our yard-- I closed the fence. I played with him some more and he poops again... but no pee? I wait around where I usually do and tell him to go potty and hurry but he doesn't do anything. We go inside, get ready for bed, and then he pees in my Mom's room! AGH. I smack him lightly and say NO, BAD DOG very sternly and escort him outside to finish his business. Which he doesn't. We go back in, and he goes back into Mom's room to finish peeing. WHAT THE F@#$. >:| I took him out AGAIN, no pee. He could tell I was mad at him, I'm sure of it. I had to close my room door to keep him from running. I put him in his crate for bed for the first time since I've had him. He whined a bit but I was resilient and didn't let him out. This morning, things were back to normal. He peed outside with no problem, ate his food, didn't find weird stuff to eat in the yard... I don't know what got into him but I hope it stays away! Because he was good, when I went back to sleep from 8-10, I let him on the bed with me. We're going to the beach later to get some of that pent-up energy out of him. I know the chewing and eating is probably because he slept all day with me and was wired. The peeing was inexcusable though. He knows better. 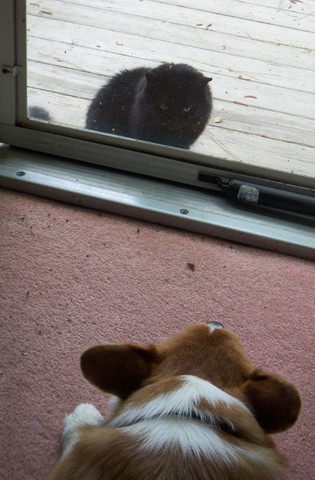 >.... chewing on my dresser--with two perfectly good chew toys right next to him.
Bitter apple spray can help. We have a couple of furniture damages to remind us, but it's been a long long time and I always marvel at how well they know what's theirs and what isn't.

>I let him out and he found a dead baby bird and started rolling in it. Then he tried to eat it.
Welcome to Pembrokeshire. He's a corgi. He'll find worse. You can try to minimize opportunities for this, but get used to it. Don't worry; it's not abnormal.

>...he's trying to swallow everything in sight. I'm so glad I taught him "Leave it" because I must have used it 100 times yesterday.
Hey, that's good! Tough thing to teach. Gwynn does know "Drop It!", demonstrated yesterday with a rib bone in the gutter; can't remember teaching this, but she obeys. She'll always try to pick stuff up on the sly; she obviously knows it's verboten, 'cause she tries to hide it. If you can teach "Drop It!", that's helpful.

>...Waffle trots through the gate and I'm following him slowly. He poops in the neighbors yard, I pick it up, and then he continues on his leashless stroll with me calling to him and trying to get him to come by promising him cookies and love.
I've posted here about "Really Reliable Recall" or "Emergency Recall". This was one of my big successes. Lori's done most of our training, but this was my brainchild at it worked very well without great effort. Search on those terms and you'll find my posts. Remember: Magic Word (never heard ordinarily), LAVISH rewards and praise, cordon-bleu treats, introduce 1st time when you know he'll come... see my posts. It is important and it does work and it can be a really fun game -- making it a fun game with lots of hammy acting probably helps the training.
Before this, when Gwynn was young, she got out and left the then-unfenced yard after dark; amid growing panic aftrer 10-15 min, an inspiration! I opened the basement door and turned on the shop-vac, and she had her teeth sunk into the vacuum nozzle in 4.37 sec. Emergency Recall is almost as good as the vacuum cleaner. Use it only in training and for real; never casually or routinely, don't overuse it.

> I played with him some more and he poops again... but no pee?.... he pees in my Mom's room! ... I smack him lightly and say NO, BAD DOG ...
I don't know what the peeing stuff is all about. I'd advise against ever smacking a dog, unnecessary, he knows he's in deep doodoo from your voice. I want my touch to be a positive thing. He can't necessarily pee on command, but if you establish regular routines, they're creatures of habit. Al & Gwynn poop early in the walk cycle, and if a walk is precluded be something and I have time only to let them out in the yard, they may not poop, and save it for the next morning. We always let them outside briefly "One Last Time!" before bed (I skipped this Wed. and got a pee mistake in the basement). Interesting: they know it's forbidden, and they apparently try to minimize the damage -- mistakes are in the basement, on concrete.
He's young, and your schedule is too complicated for him to figure out, but if you can go for routines and predictability, he'll fall into the routine.

Have lots and lots of fun with him now, games, that will bond you two. Make training a fun game.
Make a plan, list all the commands you want to teach, keep a book or log to keep you on-track.

And all the exercise you have time for, +20%. Does he play tennis ball fetch yet? Long vigorous walks. Once you have him trained to the leash, give him chances to set the pace, encourage him to run (see if you can keep up!). Tired dog = good dog.

Comment by Arrow and Pengu on May 28, 2010 at 1:34pm
sounds like teen age puppy syndrome... they start being little buttheads!
The vet said that sometimes they forget their training during this period even, but they grow out of it
hang in there... You too Waffle!

Comment by Michelle on May 28, 2010 at 1:30pm
My husband did not put my male on the bed with me this morning. My furbaby normally get on the bed rolls around on me and then insist that I get up and put him down (our bed is kinda high for jumping). He jumped on the edge of the bed attempting to make me get up and put him on the bed. Did not do it.....so he just peed all over the bedpost. FULL MOON!!!!

Comment by Sky and Lyla on May 28, 2010 at 1:22pm
I can relate. I'm going through this naughty phase with my latest puppy right now. He's about 8 months old and driving me absolutely bananas! This week he chewed up a $60+ show lead! I had a fit (and it wasn't left somewhere negligent either, he totally ferreted it out!)!! I have gone through this with each of my puppies. At some point or another I say to myself "Why in the world did I want this dog?!" But they get better and you get over it and just love them! =) Good luck, hang in there!

Comment by Rebecca Marie O'Bryan on May 28, 2010 at 12:54pm
teddy goes through these weird episodes too but its with him not wanting to poop...he has done this in cycles and i have no idea why and i will stand outside for almost an hr, he dosnt go inside but u can see how much he is in pain but will not go poop and he does...its gross. but there are days he cant wait to go potty. but then one day he did pee on are blanket -_- hmmmm, he maybe just was in a certain mood. hopefully he dosnt do it all the time. he could have been frustrated and had a bunch of energy