I have definitely been remiss in writing about the new babies. They are hardly babies any more! It is true that two furbabies are more work, but it's a good kind of work. The past two weeks, however, have been something of a record in my personal roller-coaster rides!

June 18th, my wife left for England, Ireland, Scotland, and Wales--leading a group from her church. She took our granddaughter with her. They got back yesterday (June 29th). While they were gone, the roller-coaster made some tight turns and sweeping drops. A week ago tonight, I ended up in the emergency room! I was having chest pains and, with a history of heart surgery, I didn't want to take any chances. My major concern was actually the boys. I thought that if I got really incapacitated--or died--during the night, they would be in their crate, and it might be days before anyone thought to check on us. I called the neighbor, who loves looking after them, and she came over while I was gone. They wanted to keep me overnight, but the EKG, x-rays, and blood tests were okay, so I said no. They weren't impressed that I had two puppies at home that needed my care. So, three-and-a-half hours later I was back home.

The next day I talked to my mom for almost twenty minutes, which was a real record. She had gotten much better with the cell phone since Dad died last month. Sunday night I got a call from my sister in California, who is Mom's medical power of attorney. She said she had just had a call from the nursing home, telling her that Mom had been taken to the ER. By the end of the evening, she was in ICU, a victim of sepsis. As of this writing, she still has not regained consciousness, and the doctor is amazed that she is still here. I drove the 120 mile trip on Wednesday, and Sharon got to look after Huey and Taffy again. Sadly, she will probably get to watch them again soon. The doctor has said that Mom will not recover.

I cannot believe how quickly they are growing. We have been learning lots of new things, like "Out!" when they get in the flowers. They have learned "Down," which they tend to forget when they get excited, so we sort of work around it sometimes. They learned "Fetch" very quickly, and they "fetch" everything together--in tandem! 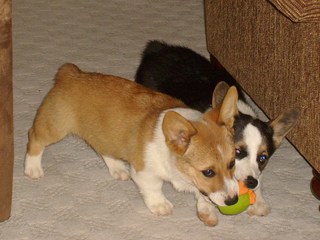 Whichever one gets there first, he waits for the other to grab hold before they head back to us with the "fetch item."

They are quickly developing their individual personalities. Huey is the guard-dog, jump-in-with-all-four-feet guy. Taffy is the lover. He likes to cuddle and lie on the couch when we watch tv. Huey will allow you to hold and hug him for a little bit, but then he has "stuff" to do. He wants down and off he goes. But he usually ends up lying close, with his head on one of our feet. Taffy likes to lie and meditate. 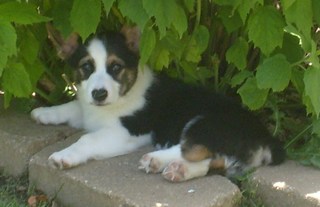 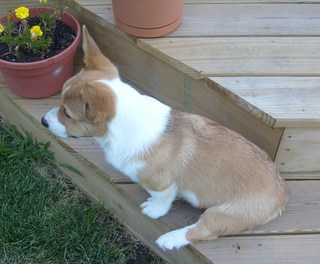 It's amazing how quickly they take hold of our hearts. Every day is a new experience (or several). I wouldn't change the extra work for anything! When my wife got home yesterday, she couldn't believe how much they had grown. Next week they will be four months old. Seems impossible!

Hang in there Randy. I am so glad you were able to go home to your pups. So sorry about your Mom!

I'm so sorry to hear about the problems you've encountered along the way recently. You and your family are in my thoughts. But I sure am glad that you have your two pups to keep you company and to bring a smile to your face in these trying times. Please keep us updated. :)

So sorry to hear about all your trials. Having those two adorable boys will get you through the tough times, though. God knows life is hard sometimes, that's why He made corgis to be our guardian angels! Hugs to you!

Comment by Sandy Stickney on July 1, 2012 at 6:56am
Hi Randy, I am so sorry to hear what you are going through with your mother.

Yes, please take care of yourself!  Glad you got things checked out at the hospital and that your wife is back home. So sorry to hear about your mom.  :-(

The puppies are as adorable as ever.  And the way they fetch things in tandem is just too sweet for words!  I'm so glad you got a picture of that to show us.

Comment by Miranda~ Moses | Maya | Maverick on June 30, 2012 at 10:22pm
Your babies have grown so much so fast!! They are adorable and their personalities sound like they each have the best different qualities and quirks.

I am very sorry to hear about the turn of events with your mom, and your health scare. It's been a rough few months for you. Keep your chin up through everything, and as they are best at it, your furbabies will help you to get through whatever comes your way.

Take care of yourself, Randy.. and remember that we are all here for you.