I feel guilty at times at how normal life seems now, even though it's only been about two months since Murphy passed away. He was my best friend and my heart dog, and although he's gone, I truly feel that because I loved him so FULLY when he was here, and because he knew how strong my love was for him, that he will always be with me, watching over me, and snuggling up to my heart when times get tough.

Maya has been growing up a lot in the last couple months. We've left her out of her pen more in short spurts [after scouring the entire open area for dangerous things -- a smart habit quickly learned through a horrible situation] and she's been doing great! She still tries to play with Moses like she did with Murphy, and he's older and independent, so it's not the close bond she's looking for [which is why we are continuing in the new-puppy-process]. But she snuggles more and listens more, and it seems like she actually WANTS to spend time next to us humans, which she didn't do much of before. Seems like she definitely stepped into Murphy's caring role a bit, but without losing her diva-ness. ;-)

We have made some good progress on our memorial for Murphy. We got a pergola off of Craigslist [gotta love Craigslist deals!] and it turned out really amazing. It is aluminum, 10'x10', and so much more of a "memorial" feel than a basic gazebo would have. Our concrete statue came a while ago, the picture and tiki torches are there, as is an "M" garden flag [all temporary locations until we have everything finished]. We found concrete paver stones [kind of mosaic-like] in the woods on our property, and are going to make a winding path leading in between two Yoshino Cherry trees [still potted but on site] and ending with a rectangular pad in front of the pergola, the tiki torches on either side. Not sure if we want grass or rock over where he is buried yet [a couple of decorative ideas in mind] but a small concrete bench will be the place for his statue, a vase for flowers, and any tokens that we want to bring out there. We moved the big rock into the back area [after the picture was taken] and will be attaching his name when we get to that stage. Working on taking out the stinging neddles / weeds in the back area, in preparation for wild flowers. It's a work in progress, but the biggest piece is complete and it feels good knowing something beautiful is there, where he is. 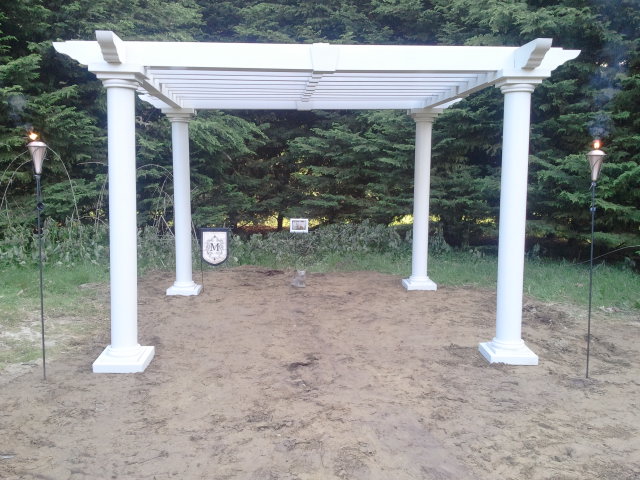 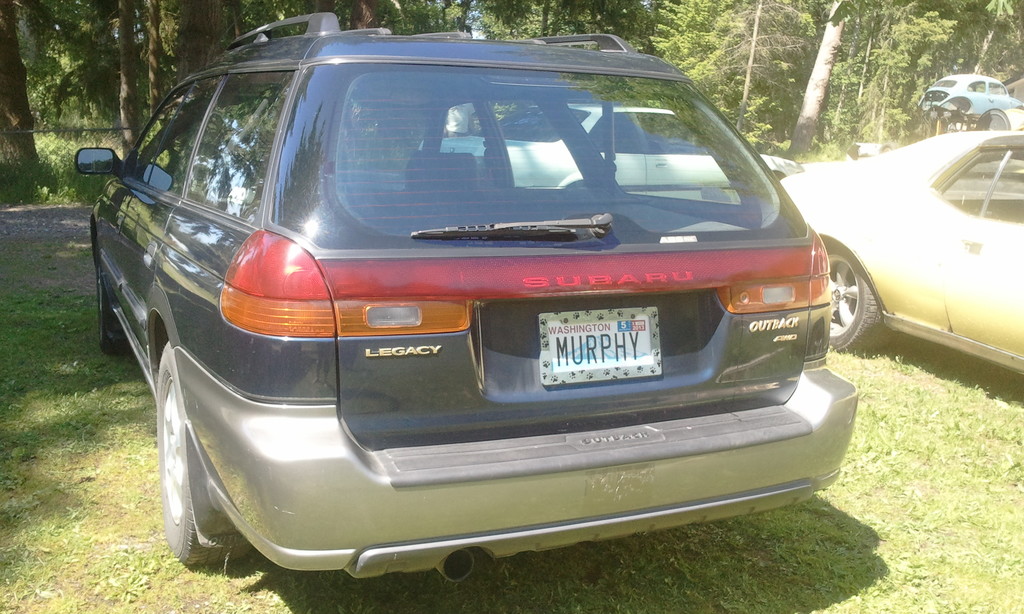 I call it the MurphMobile! His collar and nametag are on the rear-view mirror as well.

I already had his and Maya's names tattooed before he passed, and that's always with me too.

Even though he is gone, his memory lives on and the new normal isn't so bad. He would have made it a bit brighter, but his time has come and passed, and I've learned to say that it's okay. Makes me appreciate the ones I do still have, makes me more attentive to possible dangers, makes me ready for anything, because he'll be at my heels, grunting at me to keep on keeping on.

He was a wonderful little Piggo and if all goes well, the newest addition to our little fur family might actually be his Great-Nephew. Estimated birthday of June 17th. :-) Fingers crossed!!! If the new one has any ounce of Murphy's spirit, I will be the luckiest girl in the world.

That is a beautiful memorial, and I love the license plate.  Murphy's memory really does live on, and I would imagine that all of this would bring a big corgi smile to his face.  It's very nice to hear how Maya has stepped into his caring role, too.  Let us know how it goes with the puppy!

Best wishes!! I am glad that this tragedy has helped you realize even more to enjoy the good things..it is a gift from Murphy for sure.

oh miranda, its absolutely beautiful! im tearing up! :') i LOVE the pergola and and tiki torches, it really makes the memorial look stunning.

im sure murphy is indeed looking down from doggy heaven, and making sure you are safe and letting you know that he will always be watching over you ! it is so inspiring to see your strength through a devastating situation!

good luck with the new puppy! i think its great that the new puppy is murphy's great-nephew, and im sure he will have some of that murphy spirit in him!