I like the title "Dynamic Duo" for my little guys. They are just that!! Good Lord, the energy those boys have! The fetch continues with the tandem return, and they would do that for hours. Tuesdays are my "genealogy days," so I spend most of the day (off and on) in the basement family room, going upstairs often to see what they're up to and to take them outside. We also play in the inbetween times. This past Tuesday we played more than usual. My wife was out of the house all day until early evening. After dinner I went back to work, leaving her to take over. After about two hours she came to the head of the stairs and said, "You've got to come and relieve me; they're wearing me out!" She had been playing fetch with them all that time. I finished what I was doing and went upstairs and played fetch for another hour and they were just as lively as they were at the beginning. What a pair!

There is no doubt that two are more work, but good heavens the fun! It well outweighs the work. There is not a day that goes by that I don't laugh at least a dozen times...and I mean hard, belly-laughs. Sometimes they are like a couple of little comedians--and they know it. And they do such a wonderful job of entertaining each other. Not that there aren't tense moment...there are. They're still trying to work out who is alpha. So far they kind of share the title, both realizing that I am the real alpha male and my wife is the alpha female. Still, they spat occasionally like our two sons did when they were growing up.

Recently we found a rabbit nest in one of the iris beds close to Wink's grave. I saw Taffy standing there, dead still, looking into the irises. Huey came and went--another difference in their personalities. Huey has so much to do that he doesn't handle "long term" situations like Taffy does. I decided to see what was afoot, so I went over to where Taffy was. I looked down and could see the dead grass mulch moving ever so slightly. I have never seen a snake in our yard, even though we have a woods and creek close to us, but that was my first thought. I wasn't crazy about the idea of reaching down there, so I went to the fence and got the "poop tongs" that I use to clean up after the guys. I pulled back the grass ever so slightly and there were three baby rabbits--pretty close to being able to leave the nest. So...off I went to the shed to get some short white wire fencing to put around it. Of course, every time the boys went out, that was there first stop. A couple of days later I was watching them out the kitchen window and noticed that they were jumping around a great deal. We went outside and found that they had one of the little rabbits, playing with it like a toy. They weren't biting down on it, just covering it with Corgi slobber and scaring it half to death. I managed to get it away from Taffy and tried to reassure it (yeah, right!) before putting it back in the nest. As soon as I did, it took off like a flash. It was long gone before I could catch up with it. A couple of days later the other two were gone. That has been almost a week, and the boys still go and sniff at least twice a day.

I am so glad we decided to get two. We still miss Wink a lot, and always will. But these little guys are quickly making their own places in our hearts and lives. There has been a lot of loss in my life this year, but they have done so much to make it easier. 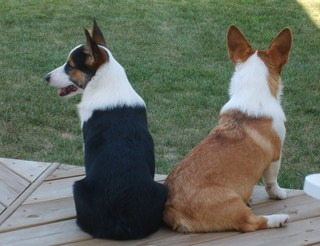 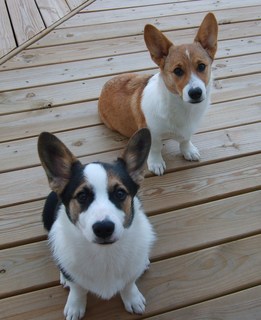 I've missed hearing from you. I'm so glad the boys are entertaining you all and making sure you go over your laugh quote for the day. Thanks for the pictures as well and keep them coming. Corgi kisses to the boys!

Thanks so much for the update! I just love hearing about these two and I'm so glad they came into your life when you needed them so very much!

Comment by Miranda~ Moses | Maya | Maverick on August 16, 2012 at 10:10pm
I am so glad they are doing so well! They are getting so big! What a great pair. I'm glad they are helping with the losses you've experienced lately. Little corgi angels, they are.

I can't believe how grown up they look already!  It seems like just yesterday they were little roly-poly puppies.  What a handsome pair they make, and I'm so glad that they have brought such joy to your lives.  It sounds as if they've been the best medicine possible to heal your pain ("take two corgis and call me in the morning").  :-)  Please keep the pictures and stories coming!

They sound wild and wooly and lots of fun.  I am so glad you got 2 as they are good company for each other but I don't envy you all the energy it must take.  Dynamic Duo sound like a wonderful name. I only got 1 puppy and he was so lonely.  I kept searching for a corgi rescue and ended up with a mix.  Unfortunately, even thought it was not obvious, she was ill so it has taken a long time to have a play buddy.  He did love her from the beginning and tried to help take care of her.  Good luck with the Dynamic Duo.

Love the Dynamic Duo name! They sure are cute.