About a year ago my little buddy Ivan broke his larger premolar on his left side. I was shocked and very upset when I discovered it simply because of how much it must have been hurting him since it went right to the pulp chamber. I brought him to his Vet and within a week got him into surgery and had the remaining part of the tooth removed. My next thought though was how did this happen? Ivan is a very well behaved and laid back corgi who DOESN'T go around chewing on random objects in or out of the house. The only thing that he knows to chew on is his Nylabone (the hard ones, not the soft rubbery ones), but when I asked my Vet if this could have caused the fractured tooth she said "no".
For awhile I listened to my own gut and stopped giving him the bones, but Ivan seemed to miss chewing on them.
For a second time at a regular checkup I asked a different Vet if there was any link between the bone and his broken tooth and once again I got "no". Well yesterday when checking Ivan's teeth and about to give them some brushing I found that he broke the same premolar on the other side. Frankly, now I'm really pissed off at myself and my Vet. I can't help but feel like it was the Nylabone because I've never ever seen him chew on random objects like a chain-link fence, rocks, etc.

My question is has anyone else had a similar problem? is it common for the larger premolar to break? and could the Nylabone been hard enough for him to break a tooth on it?
Before anyone asks, Ivan's teeth were kept very clean for dog standards and had no buildup on either tooth before it broke. He was about 6 years old when he lost his first one and is now 7 years.

Permalink Reply by Judi, Dawn, Soffie & Griffyn on February 14, 2010 at 10:58am
My sister's mini dachshund broke her back molar chewing a nylabone. And it required surgery for the vet to extract the tooth. And it was a very precarious surgery. The vet told my sister that yes, chewing the nylabone was most likely the cause. Needless to say, she removed all the ones she had and threw them immediately in the trash.

Now.... that being said, we have purchased nylabones for Soffie and Griffyn but they don't seem to care for them and only chew on them occasionally. We also have 2 of the antlers and they seem to chew those more than the nylabone. Their favorite is rawhide (we only buy USA made) but we only let them have it as a special treat once in awhile because it can really add the weight onto them quickly!!

Their favorite treat right now, is a kong stuffed with canned pumpkin (no sugar, no spices!!) and frozen. They love it!! and it keeps them busy for quite some time!

Permalink Reply by Sam Tsang on February 14, 2010 at 11:03am
yes it can happen, even ice chips can chip a tooth. Regardless of what the chew toy is, always supervise and take away after a short time.

Permalink Reply by Bev Levy on February 14, 2010 at 12:24pm
Yes Nylabones are banned from our house since Sparty cracked two teeth an wore most of the enamel off his back teeth with them. I still have some of the rings because he doesn't crank as hard on them as he did the bone shaped ones. My vet said this is a pretty common problem. Some dogs are just big chewers!

Permalink Reply by Alice on February 15, 2010 at 12:35pm
Finn is a big chewer and he chews the hard Nylabones and has not damages his teeth. I do worry about it though because I can tell he's chewing really hard. The problem is if I take away the Nylabone, what can he chew? He needs to chew so not offering an alternative is not an option. We give rawhides occasionally under supervision but he eats them too fast so it's not the best option. He's had real bones but they are even harder than Nylabones and I worry about them breaking his teeth or wearing down the enamel or his swallowing sharp bone chips. The Kong doesn't keep him busy for long and he doesn't actually chew it as much as lick and pizzle sticks smell to high Heaven. The antlers are the only thing I haven't tried but are they not hard like bone and do you not need to worry about them swallowing sharp pieces of that?

Permalink Reply by Bev Levy on February 15, 2010 at 3:50pm
Alice, Like I mentioned I found some Nylabone rings which Sparty does not seem to crank on so hard. They all like them but they can be hard to find. I also have cow bones that also can not be cranked on quite as hard. The bone shaped nylabones can be held with the paws and really shoved into those back teeth which is how Sparty broke his. Also on rare occasions I bring out the compressed rawhide bones. I do not leave them out all the time because they would fight over them and the dogs also would do nothing else but chew I think. Here is a photo: 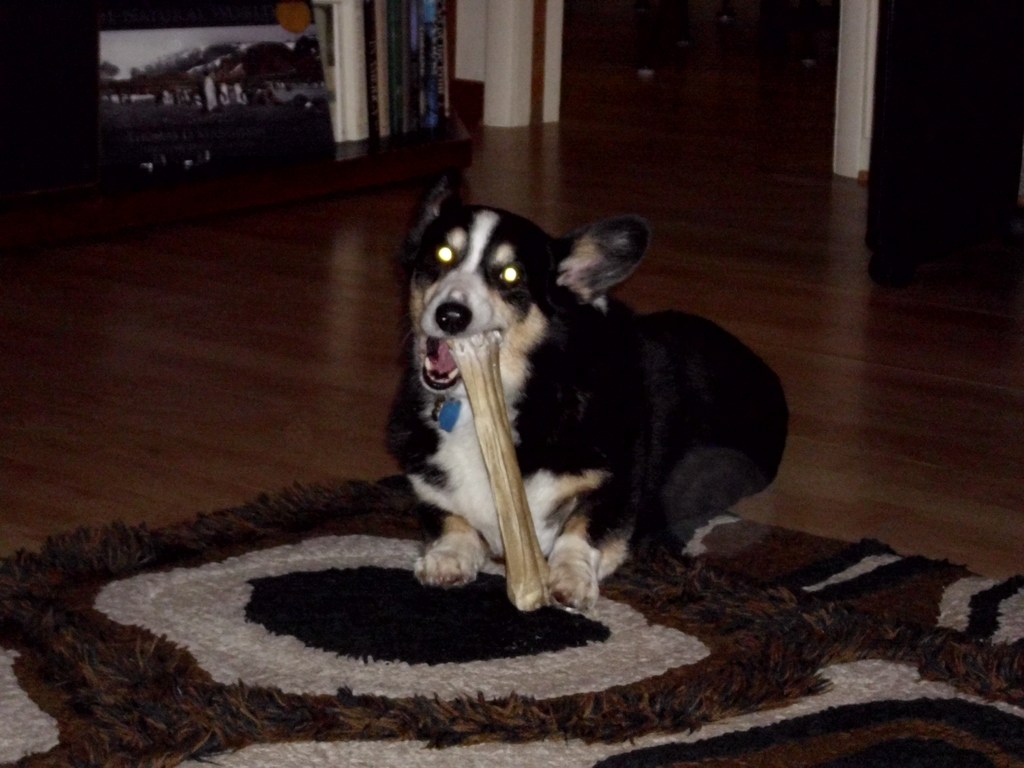 Permalink Reply by Alice on February 15, 2010 at 4:07pm
I found them online:
http://www.nylabone.com/products/non-edible/durable-chews/ring.htm

I'll have to see if I can find them in a store and give them a try. Thanks for the tip. :)

Permalink Reply by Beth on February 15, 2010 at 8:23pm
Alice, we use the sterilized non-stuffed beef marrow bones from the petstore. I don't think they can fit them all the way bank in their mouths to crank down on them, and since they leave little teeth-dents in the bone, I think the bone might be marginally softer than their teeth.

I've still heard of dogs breaking teeth on them. I don't think there is a perfect solution, unfortunately, and everything has some risk. Someone we know just had a dog chip a tooth in the park; he picked up a stick and was running with it, and the end of the stick banged into a solid object because the big galoot misjudged the distance.

Permalink Reply by Alice on February 16, 2010 at 5:38pm
We have some of those too. Finn chews on them pretty hard but I don't think it's getting to his back teeth. With those bones I'm concerned about his front teeth. The only other thing that really bothers me about those is that I have seen him break off nickle-size pieces that have sharp corners and that could be dangerous. You're right though, there is no perfect solution. The one thing I try to do is buy things that are too big because it seems to slow him down a bit and prevent them from chomping with his molars. Even with the Nylabones I buy the giant size though I've tried many different ones in the past.

Permalink Reply by Alex on February 16, 2010 at 11:27am
Yes, our Dee Dee chipped a few with hard Nylabone, and it is now banned from our house as well. She is a very good dog, and only chewed on things she was supposed to, but when we asked the regular vet, they said no, it might be just cavity... When we eventually took her to the Animal Dental Specialist, he said, yes, definitely could've been Nylabone. As Sam said, he also told us it can happen with just ice cubes as well. It all depends on dog's teeth. Ours seem to be weaker than others. Just like humans, some have better teeth than others. Now, we only give her rawhide or rope supervised. We take them away when we can't watch her closely. I'm sure she misses the Nylabone, but we rather not go through that root canal ever again!

Permalink Reply by Theresa + Caitlyn on February 16, 2010 at 4:01pm
Caitlyn and her littermates do not like the regular Kong shape because they can't hold it in their paws and chew. They prefer the "Planet Kong Goodie Bone" in extreme black. I rarely find it in stores; usually order it online.

Permalink Reply by Lucy &amp; Ricky (Wendy/Jack ) on February 16, 2010 at 9:12pm
My corgi broke a tooth but we believe that it was the result of chewing on a stone in the backyard. She has never had a nylabone. I have never heard of problems with nylabones, but I have heard of problems with the greenies (dental) chew toys.

Permalink Reply by Lucy &amp; Ricky (Wendy/Jack ) on February 16, 2010 at 9:32pm
OOPS. We never had problems with Nylabones (maybe bec. none of our corgis liked them!) but I see that many people have. Lucy had problems with every chew toy, except cow hooves (yes cow hooves). Just be sure to discard them before they get small. We all know how much puppies need to chew on safe toys. Fingers and furniture are not toys. However, as Sam Tsang noted, all chewables can be dangerous & need supervision. Perhaps other corgi owners can comment on any problems associated with cow hooves, other than their smell!