Hey, all!  Margo the 6 month-old Cardi is adjusting well!  She is attached at the hip to my Pem, who loves the company.  When I picked her up from the breeder, she explained that she was standing both ears up for awhile but one drooped again.  I haven't seen it stand once in the last four days.  It's very obvious she's still teething, especially her back molars because that's mainly where she does the chewing; does that have anything to do with her ear droop?  I've heard that constant chewing can weaken the ear muscles and that erupting teeth need a lot of calcium.  Is that true?  My Pem's ears were both up without any drooping at all by 4 months.  I've also heard that Cardi's ears just take longer because the ear leather is thicker/larger?  Would giving her calcium supplements help?  Any suggestions on that? I used to feed my Pem plain greek yogurt and I think that may have helped his one ear to pop up.  I can feel that her "up" ear has firm cartilage, the other is still pretty felt-y.  I'd rather not result to taping...

The first photo is Margo around 4/5 months taken by the breeder shortly before I picked her up.  The second photo was just snapped now and she is exactly 6 months now to the day. 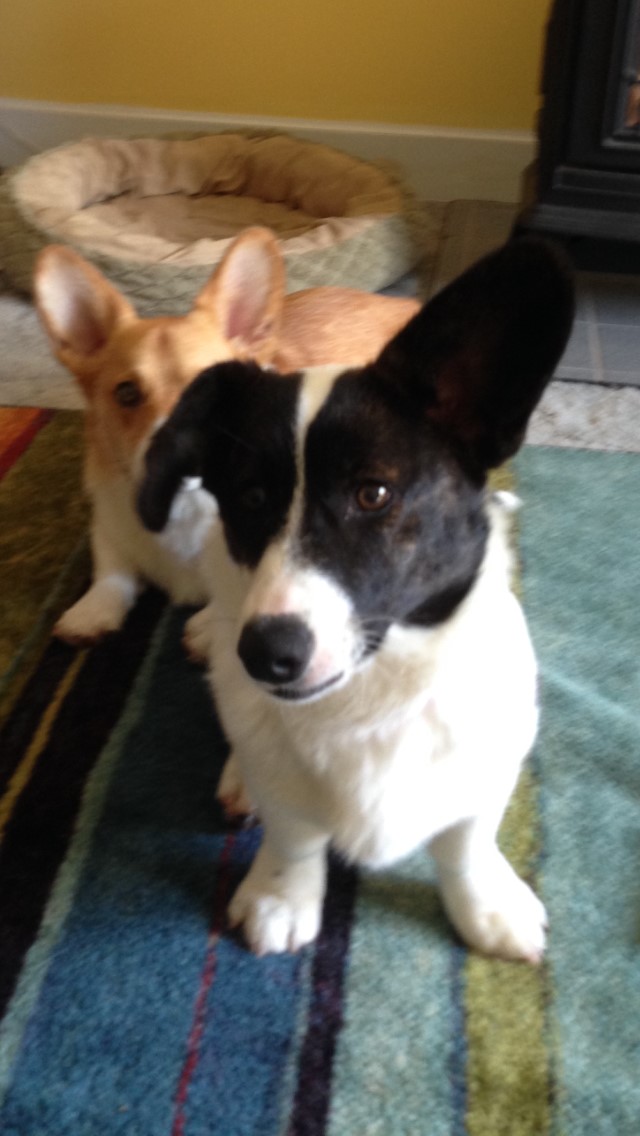 Permalink Reply by Beth on June 17, 2016 at 12:41pm
Aw. So cute!! My understanding is that lots of Cardigans do need taping. And sometimes some sort of support tube taped to the ear as well. They have slightly bigger and heavier ears than Pems.

The breeder should be the best to advise you, as she knows both the pup and her own line, how her pups generally develop, etc.  As for chewing, that will not damage the ears at all.  I would avoid petting the dog on the head, most people go straight to the head and ears when greeting a pup, stick to chest and body until ears are up solid and tell others to do the same. 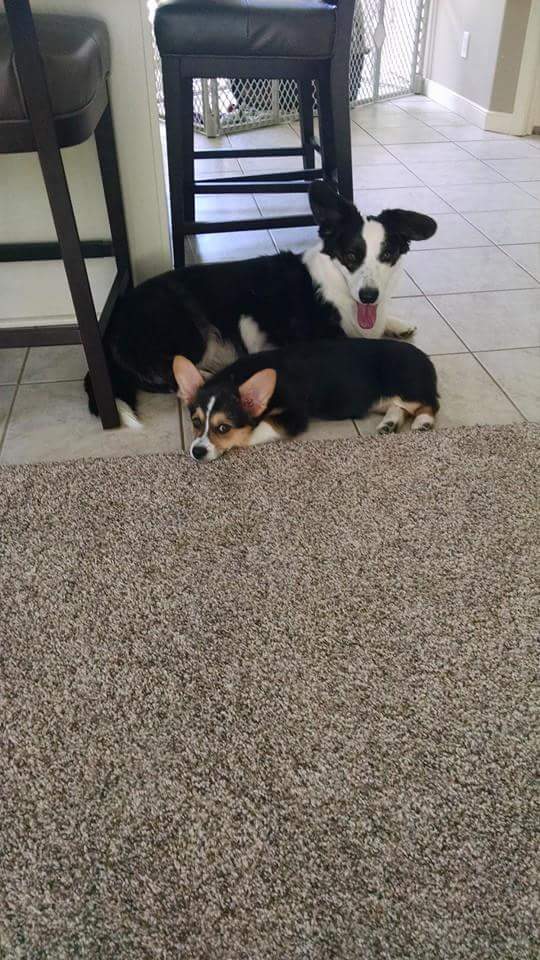 I taped my Watson's ears but he was so good at getting the tape off...

There was a discussion about this here at MyCorgi.com with some interesting comments: http://mycorgi.com/forum/topics/let-s-talk-about-taping Scroll down to Anna Morelli's contribution to that discussion, which led to a fair amount of back-and-forth.

I personally incline to think ears up or down is probably a genetic thing, especially at 6 months plus (http://www.ncbi.nlm.nih.gov/pmc/articles/PMC2919785/ and https://cshmonographs.org/index.php/monographs/article/viewFile/456...). There's nothing wrong with a cute floppy ear, IMHO, if you're not planning to breed her. That dog of yours IS ridiculously adorable! Could be the ear adds to the adorability...

Back in the day, before I became a shepherd-dog aficionado, I had a Doberman pinscher. The breeder, one of the great morons of Western history, had put up a "friend" (her term: we are not talkin' vet here...) to docking the pup's ears. He made a grand mess of it. As it developed, he had broken the cartilage in the dog's ears. I taped and taped and taped and taped, all to no avail.

It is not fun for the dog to have its ears taped. When you pull the tape off, it yanks out the hair on and around the dog's ears. Imagine how it would feel to have your own hair yanked out with sticky surgical tape! Personally, I think docking ears should be illegal in this country, as it is in England. That's the conclusion I came to after the dobe experience. It is cruel and unnecessary and should not be allowed. Nor, I think, would I tape any other dog's ears, cropped or not.

Breeders "fib" all the time to get people to take puppies that they know are less than "perfect." The woman who bred my son's cryptorchid golden retriever, for example, told him that the dog's testes would descend at about the time he was six months old. Of course, one hesitates to call this a lie, but neither can one regard such "ignorance" as exactly truthful in a person who's in the business of breeding expensive dogs.

Of course, you're not talking about having to arrange surgery for a cosmetic issue: it's just a minor annoyance. But if it were my dog, I'd question whether a funny little floppy ear (too cute!) matters enough to put the dog through unnecessary discomfort and even pain.

Yep Vicky, it's genetic (unless there has been trauma to the ear cartliiage). That's why I suggested asking the breeder, who best SHOULD know the pup's lines. When I was breeding Alaskan Malamutes, in my first litter 5 out of 6 had down ears. I did not tape, because I wanted to know.  Ever since then, I only bred dogs who's ears came up naturally and inquired about potential outside sires.  Never again did I get pups whose ears did not come up naturally.  Ears can droop briefly when a pup is teething.  I would tape a pet, it's breeders that need to make it a priority, if it's something they care about.

Life is annoying when you're a puppy! :-) It's amazing that they're so cheerful.

Chelsea remarks that the pup's molars still seem to be coming in. If ear drop is related to teething, maybe that's the issue. I wonder, though...given that it's not a muscular thing.

With German shepherds, it can take as long as 7 months for some dogs' ears to stand consistently. Some of them will have their ears stand fairly early and then lop over in various  hilarious ways for awhile and then come back up. Usually, as I recall, if a Gershep's ears are standing before the pup starts teething and then drop, they will come back up after teething ends.

What d'you bet the breeder doesn't know whether pups in her sire's and dam's lines have consistently had their ears come up, and when? Okay, that's cranky...but over the years I've run into a surprising number of dog breeders who seem to have no clue. Or they have and believe wrong information, which you discover after you look it up yourself in some registry.

Permalink Reply by Beth on June 18, 2016 at 3:25pm
Masking tape doesn't stick real well to hair and if memory serves it falls off on its own after about two days. Do pups find it annoying? Yep. Other things pups find annoying are collars. Leashes. Harnesses. Not being allowed to bite you. And so on

I too have an issue with cropping ears. But a bit of tape I'm ok with as long as pup is healthy. However after the stress of coming into a new home I'd wait a week or two to see if they come back up.

UPDATE:  I talked to the breeder.  Both of Margo's parents have upright ears.  Margo was held for show, so the breeder expressed that she is definitely show quality and both ears should stand soon (her sister ended up being just a little bit better show quality).  The breeder suggested taping and I started today and she's doing really well with it!  I'm hoping this only lasts a few weeks.

PS:  I've been using duct tape.  I pat the sticky side on something fuzzy first (a blanket) before adhering it around her ear, so the tape still sticks but when I peel it off it doesn't take any of her fur with it.

Hope this works...it probably will.

I had the same concerns about Jaxx.  At 6 months he still had one floppy ear.  It seemed to flop more when he was tired, but pretty much it just wasn't up the same as his other ear.  He has rather big, leathery ears for a pem.   I did talk to the breeder and she said he is still teething, that it would be up in a month or so.  So, I fed cottage cheese for extra calcium, lightly massaged his ear and continued to worry about it.  Lo and behold in the last few weeks it is up and staying up!  LOL.  The breeder was right.

See in the picture, Jeli's ears are upright and perky.  Jaxx' left ear is a bit droopy.  I thought this was going to be permanent, but its not.  Both his ears are up all the time now - just within the last two weeks.  He will be 8 months next week. 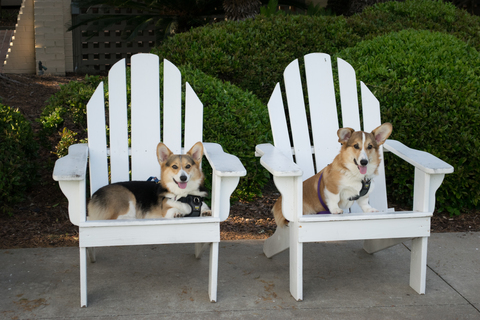 Permalink Reply by Chelsea Meredith on June 23, 2016 at 9:32am
What a cute picture! Thanks for the advice, I've been taping her droopy ear but she always gets it off at night. I wake up in the morning and she's in her kennel with a floppy ear! I'm giving her some plain Greek yogurt to help give her extra calcium and protein. I'm hoping in the next few weeks it will just stand on its own!