a sad story with sort of a happy ending

as most of you know, i got ravioli about 2 weeks ago. at first i had some of the usual puppy-in-a-new-environment problems, but after a few days he was doing really well. i taught him how to walk on a leash and he learned his name and everything. the first 2 days i had him at my boyfriend's apartment, then i moved him to mine where i live with my roommate. this is where it gets sad.. =( not long after i brought him to my apartment, my roommate started complaining about her throat itching and her nose being stuffy. to make a long story short, it turns out she is allergic to dogs =( the whole reason i got a dog is because i knew she was allergic to cats. when i asked her if she was allergic to dogs, she said "no i grew up with a dog!" she told me this week that her childhood dog was a poodle.... those are hypoallergenic if you guys didn't know... i was torn up. i asked her if she could try to stick it out for me and for ravioli, and she did for a while, but she eventually got fed up. she started to resent ravioli and wouldn't treat him as kindly as he deserved (not physical abuse, but she would say mean things to him). she didn't want me to keep him anymore.. =( i had to give ravioli up.. i cried and cried and cried. ravioli is the sweetest dog i've ever met. he wasn't like average corgi puppies, he was really chill and was literally like a stuffed animal. he would let me pick him up and manhandle him and cuddle with him and he wouldn't squirm or bark or growl or try to get away. he was a big cuddly sweetheart and i didn't want to give him up after having him for such a short time, i had already fallen in love with him! but i had to because ravioli didn't deserve the verbal abuse he was getting from my roommate and she couldn't live with a dog that made her sick. it was a really tough decision but i had to do what was best for ravi. i tried contacting my breeder multiple times but she never got back to me. many many people offered to take him for me, but i didn't just want to give him to anyone, i wanted to give him to someone that would love him forever and be able to provide for him and give him the training and life he needed and deserved. i ultimately decided to give him to my friend's grandma. her dog just recently died and had been feeling a little blue since her dog's passing. she has a house and a big yard for him to play in, and she's 65 so she's still very active and would be able to provide him with the exercise he needed. i gave him to my friend yesterday and she brought him to her grandma's. last night she sent me pictures of him and his new home and i cried =( but he looked really happy running around in the grass. my friend thanked me last night because she said she knows it's exactly what her grandma needed. she said that ravioli instantly took to her grandma and had already started following her around. it was a terribly sad and difficult thing for me to do, to give him up, but i do feel some consolation knowing that he is bringing smiles to someone else's face. my friend said she hadn't seen her grandma this happy since her last dog died. the good thing is that she lives close so i can still see ravioli if i want to. i can't describe the sadness i feel for having to give up my little fluff ball not long after getting him, but i'm sure some of you have experienced this sort of sadness of having to give a furry friend up. i guess i will just have to wait a few more years until i can get my perfect little corgi and give him a forever home =( here are the last few pictures i took of him before my friend came to pick him up 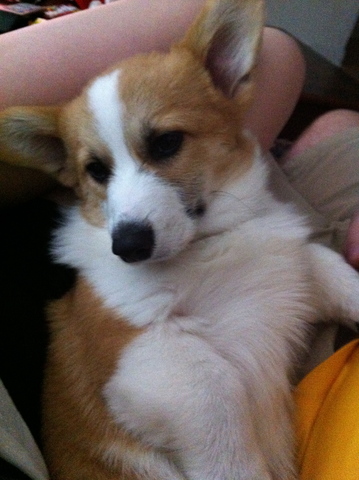 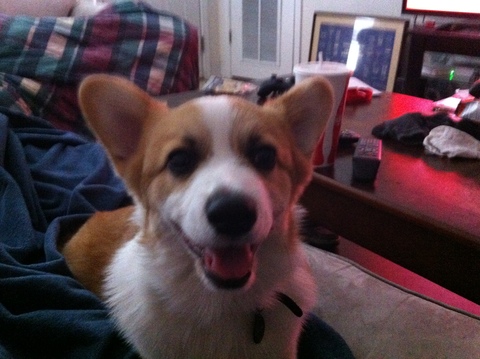 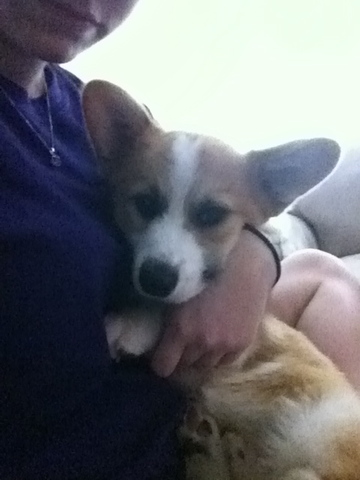 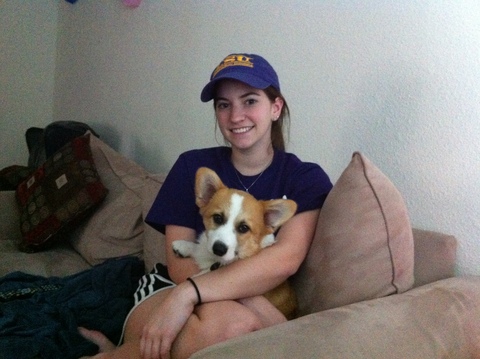 That is really sad, if it's a new roommate, I'm sorry that no agreement could be made. Because the bond between owner/pet should be stronger and more lasting than random agreement between roommates.  Especially since there is no "official", actual thing as hypoallergenic dogs.  All animals have dander.  There are a few hairless breeds (cats and dogs) that people won't suffer from, and others that are less likely to cause allergic reactions, but there are a lot of things people can do to manage it, on both ends.

Also if she was being cruel to your puppy because of her allergy issues, I would've gotten rid of the roommate, not the dog.  People who are cruel to animals are barely human, and not worth associating with.

Comment by Brittany,Chancey,&Copper on May 3, 2012 at 10:35am
Wow I couldn't imagine giving my corgis up :( that must have been really hard for you..I would have made my bf take allergy pills, I have to because I'm allergic too! It's hard sometimes but I got used to it and thankfully my allergies have subsided. Maybe all your roommate needed to do was get used to it. When I brought my first corgi home I got so sick I had to miss a lot of work and the vet actually suggested it might be the pollen off her fur not her! After a week or two I was much better and now one zyrtec a day keeps the sneezes away :) my heart goes out to you and Ravi. Please take it as a learning lesson before you get another corgi, they are such awesome dogs!

I am sorry that things did not work out for you and Ravioli. Sometimes life throws you a curve ball and it's hard to work things out. I am currently in a difficult situation myself. I bought Chase back in January and everything has been fine until recently our landlord decided that he did not want us to have 3 dogs. He told us we had a month to get rid of two of our animals. Instead we decided to move. It is too hard for me to give up any of my furbabies. It is difficult to find a place to live in PA that allows you to have any pets, much less 3 dogs. Because of this we are moving to Florida where pets are much more accepted.
However, not everyone is in a situation where they can just pick up and move.
I know that you are going through a painful situation and you did what you thought was best for Ravioli. It sounds like he is in a loving home where you can visit him often. It is good that you didn't just ditch him in a shelter, you could have done much worse. If you were a bad or irresponsible person you could have resold the cute little puppy and gotten money from the highest "bidder." Instead you did the best thing possible and found him a loving home with someone that needed him as much as he needed her. I think you made the right decision. Not all breeders would have wanted to even take him back. Most breeders try to sell the litter while they're still in their "cute puppy" stage.
My heart goes out to you a Ravioli. I know this is a difficult time for you and likely him. Keep your head up, and visit him!

Kalley, I applaud you for finding Ravioli a good home and know that you will miss him but had his best interests at heart. Sorry it ended this way but it just couldn't be helped. I have two wonderful cats that were rehomed at 4 years old because the new baby was allergic and their previous owner at least knows they have a great home where they are much loved.

If you really truly wanted to make things work, you would have. I'm sorry but buying a puppy is a lifetime commitment, and when things don't go as planned a responsible adult does not bail on the dog in a week. You could have offered to buy your roommate a year's worth of allergy medication, had the carpets professionally cleaned, bought a dyson animal with an awesome allergy filter, kept him mainly in your room and took him to daycare for extra exercise, or if all else failed you could have tried to sublease your apartment or work something out with your landlord. You said in previous threads you were 100% ready to take on the responsibility of owning a dog, even when multiple people questioned your living situation, but clearly you were not.

It really seems like you wanted that cute puppy from the internet pictures, and then when the real deal arrived it wasn't what you were expecting at all, and so you bailed on him. It really makes me sad to be honest, because he seems like he was a very sensitive little guy and I'm sure all this moving around will be hard on him. If that sounds harsh well, yeah it is. Welcome to what responsible pet ownership should be.

Comment by Kaley and Ravioli on May 2, 2012 at 8:37pm
Right well I wasn't like the average "young person" and I didn't impulsively buy a dog. I spent over a year researching the breed and I had been looking into breeders for the last 7 months. I switched roommates this past month and moved into a new apartment with a one year lease. She was fine with getting a dog and told me she wasn't allergic but it turned out she was. I'm not some idiot who would buy a dog for the hell of it without thinking. I put a lot of time into all of this and was hit by a stroke of bad luck. But you know, thanks for assuming positive intent on my part.
Not.

Sad to hear this story, and like Jane, I don't want to sound too harsh, but this is really why it's not good to get a dog on impulse rather than spending some serious time doing research and making sure it will work with the situation. So many young people think puppies are cute and cuddly and they don't understand they are a lifetime commitment. I saw this way too much working for a vet office. It is part of why shelters are so crowded.

Alright, well, I hope next time you really take other people's advice to heart, so you don't have to rehome the dog at the first sign of a bump in the road.

Comment by Kaley and Ravioli on May 2, 2012 at 1:22pm
I didn't sign a contract with the breeder, and I called and emailed multiple times. I called her house and cell phone and left multiple messages. I wouldn't have given him to someone else if I had signed a contract. I'm not dense.