I love this puppy!! // Naming decisions are hard...

Well, Jack has been here for just about 24 hours now. And I can honestly say, I love this puppy!

Jack was a show prospect before he came to live with me, so he's never learned any of those "silly" things like "sit" or "stay". But he's one of the most polite puppies I've ever met! He doesn't try to eat everything, and if he does, a stern "no" will usually deter him. He does lick... kinda a lot though. Not sure if this will be a problem or not, since I'm not a huge fan of dog slobber all over me. Haha. He also takes a while to go potty after we go outside. But other than that, he's been great. Most of the time if I'm not paying attention to him, he'll just go lay down somewhere.

He also seems to be in love with my bathroom. He likes to sit on the towel that I have on the floor, and he brings his toys and rawhide in there to chew. Haha. He doesn't seem to love toys very much though. We'll have to work on that. But he does love the mirror. He'll whine, and paw, and stand up in front of it. Poor boy can't figure out why the corgi in the mirror just keeps copying what he does!

As soon as I can find some bells (I looked when I was at walmart but couldn't find any...) I wanna teach him to ring a bell to go outside. He barely ever makes any noise! I haven't even heard him bark yet. We're taking care of some dogs for the guy that used to rent my room, and his dogs have been barking up a storm. But not even a peep fro this guy. I thought he would wake me up in the morning when he needed to go out, but nope. He didn't. All I heard was him crunching on his bottle toy. And when I got up finally, he had peed already. Good thing I listened to the breeder and got him belly bands!

He seems to be adjusting really well. He's met one of my housemates as well as 2 of my friends, and he's great with everyone. I thought he would need more time to adjust to moving to his new home, but he seems just fine. He loves to cuddle. I'm kinda tempted to let him sleep on my bed tonight. Or at least, not close the crate door. He's doing so well that it almost scares me. Haha.

He does move around a lot when he's not sleeping, making it hard to take pictures. So my friends have gotten better pictures of him than I have. I'm waiting for them to send me the pictures they took. But for now, here's one of him sleeping. He likes to sleep next to my hand. It's pretty cute. Haha. 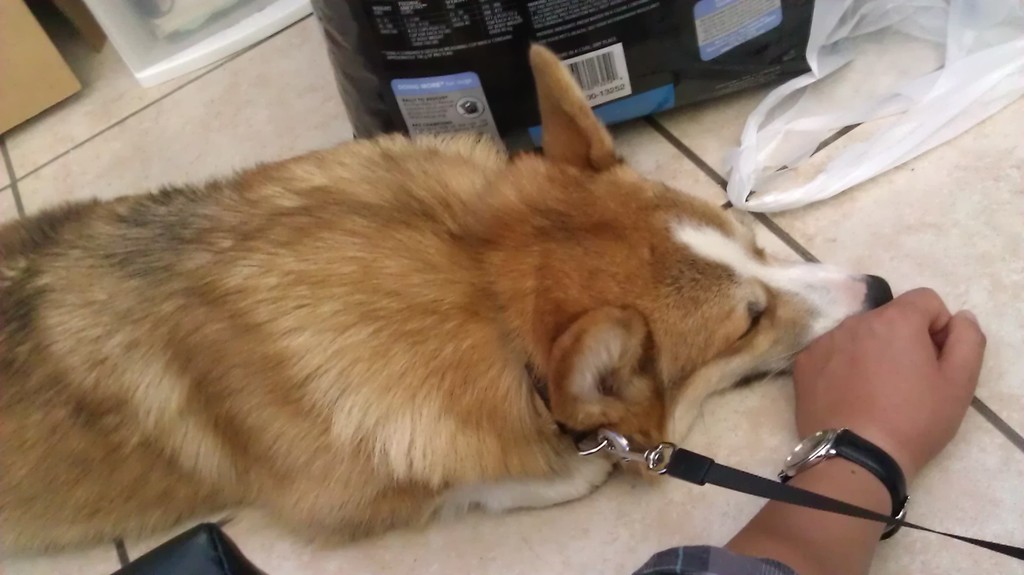 I'm really undecided about his name... I do like the name Jack, and it seems that a lot of people I know do too. But there're so many corgis named Jack! I'm kinda tempted to change his name to Mickey, and make him a sorcerer's hat. Since I love sorcerer Mickey, and I think sorcerer corgi would be pretty adorable. Buuut I don't know. Feel free to give me suggestions. I'm so bad with names!! (I hope I never have kids. Haha.)

Thanks for your comments, everyone. I've decided to name him Mickey. The breeder was telling me that he wasn't responding to Jack very well anymore anyway, and it seems to be true, so I will start teaching him the name Mickey.

And you guys were right. He is getting a little less well behaved as he settles in... Haha. We'll work things out though. Guess I'll just have to keep a closer eye on him.

But like Chris, Kadi & Brodie said, he'll develop his own nicknames with time, regardless of a name change. I hardly EVER call either of my dogs by their real names, or Murphy when he was here. Maya either is "Bean-o" as of late [going from Princess to Princess Bincess to Princess Pean-a-Binsa Bean, to Bean, to Bean-o], or I do her cat call "Kitty Kitty Kitty!" and she comes running in. Moses is "Louie" recently [Moses to Moe to Moo, to Lou, to Louie]. Their real names are usually when something serious is happening, or they are in biiig trouble.

Jack seems to be a popular name for Corgis, but so is Ein [which I didn't know until I joined this site]... and as in humans, I know about 10 "Ashley" and "Katie"s... it might be popular, but it also might be juuuust the right fit. Good luck in the decision!

Your lucky! Hehe, he seems like such a sweet boy ^ ^ It depends. If he already responds to Jack you should keep it and if not you are free to name him whatever you want :) You don't want to confuse him so if you decide to change his name, do it quickly and tell everyone so they don't end up calling him jack ;)

I also want to ditto what Chris said. Don't let him lull you into a false sense of security! Lol. But do fall deeply in love very quickly so when he becomes the little demon every corgi puppy has hidden inside you will be so totally in love with him it won't matter too much! Even though Franklin is the absolute love of my life there were definitely times I contimplated leaving him in a box outside the grocery store! Lol. Kirby didn't figure out he needed to be good before being a terror, so we are still working on the whole "love" thing with him. At this point I just tolerate him lol.

He sounds a lot like Franklin when he came home. It was like he'd known me for years and his adjustment period lasted about, oh 2 seconds lol. I did however keep Franklin crated for the first 6 months because even though he came to me potty trained (to use a yard) he had no idea what the rules of potty in an apartment were. He too was really quite but that changed within the first year I had him. He now jabbers about everything and lets me know ever feeling and emotion he has lol. I love it though.

As for a name, It took me a week to name Kirby and in the end my mom named him lol. Naming can be hard to you'll figure something out. You may even just end up keeping his name. Jack is a common  name but its also a very cute name.  Can't wait to see picutres!

I was really indecisive when it came to naming Chase. I called him "Happy face" for 3 days before it just hit me. I named him Chase because he chases me EVERYWHERE! Now he's chasing birds, the cat and sometimes his nub.

If you decide to keep the name Jack maybe you could just put your own spin on it, like Jackson. I would give it just a little more time to see his personality come out and name him accordingly. I also considered the name Mickey, I'm a huge Disney fan and my little guy is black and white like Mickey mouse.

If he responds to Jack, I'd keep it. He'll develop his own nickname with time, I'm sure. They almost all do. And not to scare you, but don't let him lull you into a false sense of security. They seem to know when the come into a new home that they need to be good little angels for the first few days, then once they have us wrapped around their fingers, they PLOT TO TAKE OVER THE WORLD! (Insert evil laugh here!) ;)  He looks like a sweetie and I'm so glad you finally have your corgi and he has you. I'm sure this is the beginning of a wonderful adventure for you both! Congratulations!

Awwww, so cute. I would just try other names occasionally and see if he responds to them. We have a cat named Baby just because that's the only name he would come to. OR....maybe start with Mickey Jack and slowely phase out of the Jack...if you think you want that. He will take awhile for the "real" jack to show himself...he's been through much change in the past week and soon you will see the real Jack!

He looks so cute. He will adjust after awhile and you will see his true personality emerge. Mine sleep with us but not until they are very reliable in the house (one year minimum).