In Memory of Stinky Wink

I knew this day was coming. It was a year ago today, Feb. 9, 2012, that our beloved Morgan “Stinky Wink” went to the Rainbow Bridge. I could never, in a million years, have imagined the pain I would feel as I held him in my arms while he took that last deep breath. My only comfort from that moment is in knowing that HE knew that I was holding him, and that he heard me whisper “I love you, Stinky Wink” in his ear, that one last time. That was the culmination of almost twelve years of companionship, devotion, and love between me and a friend that could never be replaced. Combined to that intense grief was the fact that I had to make the decision to let him go. He had developed a severe case of diabetes—something I knew about myself. His case caused intense, rapid deterioration. He had spent two nights at the vet. When I picked him up on the 8th, he didn’t look any better. I brought him home and I could tell he was relieved to be home, but he was just in so much pain. I slept in a recliner by his bed that night and, next morning, his breathing was so labored and I could see in his eyes that he needed for me to help him the only way I could…to let him go. I carried him to the truck and went back to the vet, Stinky Wink lying beside me. I petted his head and ears all the way there, promising him that one way or another, things would be better before the day was over. The vet examined him and said that we could keep him alive, but his quality of life would be very poor and he would be in pain much of the time. I could not do that to him; he had been—and was—too precious to me. I could not count the number of times he had come to sit beside me when I was working in the garden. Or the times I would sit on the steps, taking a break from work, and he would come and sit beside me, nudging me to put my arm around him. I could never count the number of times that I had felt sad, that he would come and sit by me, often putting his head on my knee, never making demands…just “being” there. I could not fight against that sweet being’s desire and need to leave the pain and be free. And so, after an injection, a few fleeting moments of life, my promise to him that I would be okay and that I loved him, his body stopped and his spirit romped through the grass to the Rainbow Bridge! I brought him home, wrapped him in his favorite afghan, while Adam dug his grave in the midst of the iris beds, where he loved to lie and keep an eye on things. And so, on this day of the anniversary of your new life, I salute you, my forever friend and will be ever grateful that you were a part of my life, even though it was too short! 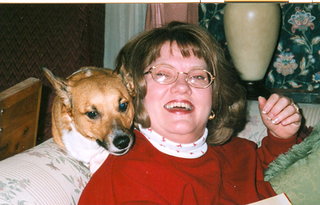 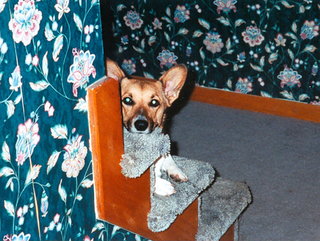 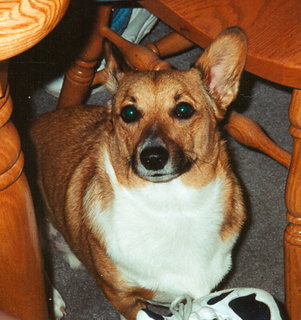 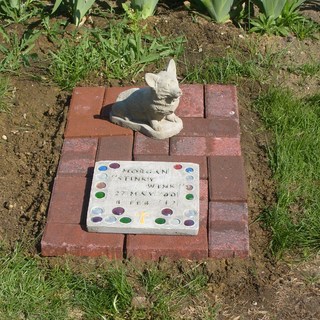 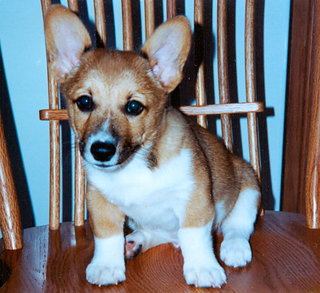 I am SO VERY SORRY for your loss. Having been in your position I can say I know how you feel. It is never good. Your writing was eloquent and brought tears to my eyes and memories back. I know we out live our canines but I would not live a single moment without them in it. Take comfort in the memories.

You did a beautiful job expressing your love for Stinky Wink. I cried.

Then I thought of the loss of the dogs in my life and cried again.

Their lives are so short.  Their love and loyalty last forever.

I am so sorry for your loss.  I lost two of my dogs within 3 months and it is so terribly painful to go through.  Prayers to you.

I really identified with your journey of Stinky Winks passing as last year was my final year with my beloved Sparty also.  Thanks for sharing with us and for being so articulate. I like to think Stinky and Sparty are having fun being "busybodies" over the Rainbow Bridge.

Tears, my heart goes out to you I'm so sorry for your loss

Comment by Natalie, Fiona, & Django on February 9, 2013 at 10:20pm
Made me cry as I remembered having to make that decision - the most loving and selfless one we have to make for our furry babies sometimes - for my beloved lil guy, Max, 6 years ago. I still miss him.

What a beautiful tribute to Skinky Wink.

I don't normally tear up for things, but the posts you all make about your dogs love and loss always strikes my heart. I know someday that will be me too with my pups. :( Certainly the worst part about having a dog is knowing it doesn't last forever.

How can it be that a whole year has gone by?  I think of you often...hoping your pain has eased some with the return of dogs' love to your household.  I know that Stinky Wink is looking down on you with love and gratitude, waiting until the day you two can be reunited.  They say there is no time in Heaven, which is good because time here seems to go forever when we lose a cherished loved one.

My tears are with you! When I think of mine that I have lost over the years there is something to be said about being by their side as they leave this world. They were by our sides in this world. It;s the last thing we can do for them is to help them be free from pain and suffering.