... is the hardest part. Not hearing this little paws on the hardwood floors or scolding the cats when they are doing something they shouldn't be, reminds me of him.

It's now been two months since we lost Ein, and while the hurt has dissipated a great deal (or maybe it's I've just gotten used to it), the hole in Meg and I's lives has not. Even Olivia, my 14 year old kitten, has been impacted. While they were not close close, she tolerated his antics and such. Since his departure, she has taken to sleeping in his crate, on his bedding, and wanting more attention. The other two cats could care less.

Even until last week I would have these moments of "I need to let him out," or expecting to see his face poking out of the fence as I pulled into the drive way.

I like to imagine he's chasing them laser pointers or just staring out into the endless views, pondering what ever it was he pondered. 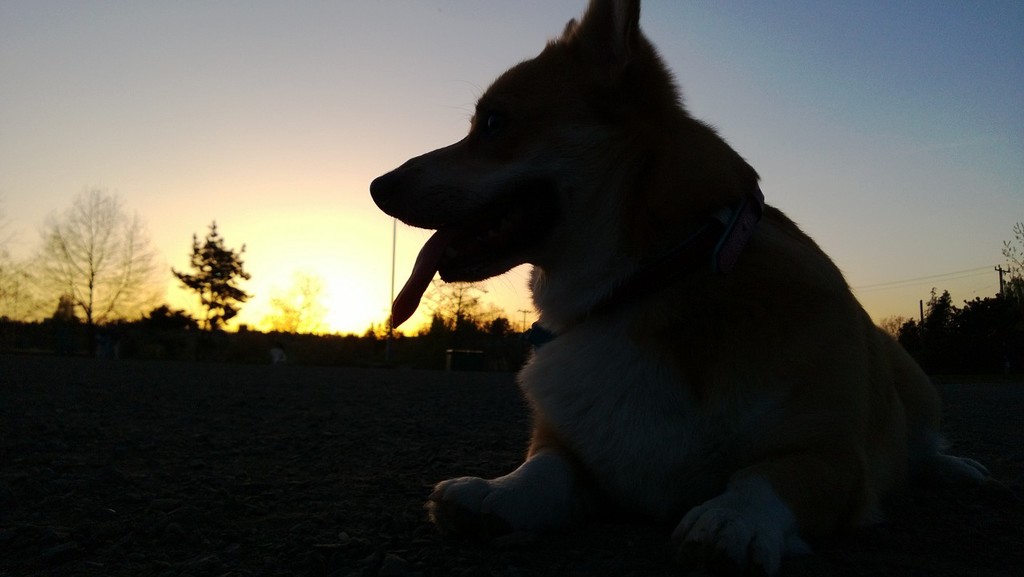 Comment by Bogart the Cardigan on September 14, 2014 at 7:53pm
Reading your post brought back memories from when we had to put our first Corgi, Niblick, to sleep after his Lymphoma came back. We went to the movies a lot in the beginning as we didn't want to be at home without him. When the door bell rang we expected barking, for a long time. Nine years later we got our new boy, Bogart, who has been terrific in every way. Please accept our heartfelt condolences on your loss.

I hope you are feeling better each week, but the pain has to be so hard. The only thing harder for pet owners than loosing a pet is seeing how hard it is when a pet looses an owner. I have no doubt your little dog enjoyed every minute he had with his family and had the best life possible. Sorry for your loss.

My last Corgi Zac couldn't catch a break with numerous surgeries and then DM, but he got all excited going to the vet and always gave him a quick kiss on the cheek at the end of each visit.  It was only if we tried to take him in the back where they did surgery that he balked.  They're amazing little dogs and I'm so sorry you had to lose Ein at such an early age.  It's heartbreaking.

Comment by Alison Prasavath on September 5, 2014 at 7:44pm
I can't imagine how you both are feeling right now. Ian was such a special guy. Like Bev said, a new family member will help you remember the good times. No one will ever replace Ian. I'll continue to keep you both in my prayers.

Bev....that's how we are.  They can never be replaced but there is always enough room to love another.  Even with 3 cats when we lose one there is a hole and things seem out of balance.

Talking with another member has made me realize some more just how special he was. Through all the testing, the surgery, procedures, sedations, etc, he NEVER once was hesitant on going back in to the vet. He would lead us in, bark his one bark to let them know he was there, and greet everyone there. Even other visitors.

Other dogs I've had, even cats, you had to drag in.

This has to be the worst part! I have found that a new family member helps me focus on the pitter paper of little feet helps me focus on the good times more than the sense of loss. Everyone deals with these losses differently so just find what is best for you. The new one can't ever replace but it helps. Best wishes to you!

Sorry for your loss.   Ein was a beautiful boy and the picture you've posted is probably a good representation where he is at the moment, overlooking beautiful sunsets everyday, at the park or yard with other of his own.

I'm not religious by any means but I consider myself to be spiritual... If that makes any sense.    I beleive in the spark, that energy that makes any living things, for me it's the soul.   They stay with us, they linger, until they're comfortable they can move on.

After we've lost our 2 cats from illnesses at 2 and 7 years of age, we still felt they've been with us for a while.   I would sometimes get a feeling they're by my feet when I'm cooking or would see something on the corner of my eye, as a shadow of their shapes going towards the living room or basement.     For me that didn't freak me out, just realized they're still with us for a little while longer and to expect they would try to play with me or do a few tricks for fun.

When my wife arrive with two new kittens one day that's when I didn't notice them anymore.    It was a sense of comfort in a way as a new generation has taken their place in their honor.   They're as lazy as their former brothers...    :)

2 months is not a long time to adjust.  You will always miss him but the day will come when thoughts of Ein will bring smiles remembering the tilt of his head, the silly grin...and wistfulness but the deep pain will be gone.

I've been thru it too many times over the last 34 years.

Dogs and cats know. Anna the GerShep refused to eat for three days after Walt the Greyhound died. She knew, apparently, that he wouldn't be back when I came back from the vet, sat on the floor, and wept for fifteen or twenty minutes.

I hope you start to feel better soon.