Today is five months since we brought Tucker into our family.  Amazing how fast time flies, when you are having fun.  After going back and forth for over a year about adding a pup, and then deciding not to, we found ourselves much later discovering Tucker, at a shelter so close to our home.

Lance and Tucker hit it off right from the very beginning, what a relief.  I feel we really got lucky finding Tucker, what a shame someone just dumped him at the shelter, can't even imagine why.  Tuckers personality is awesome, laid back and doesn't seem to have any training issues at all.  Tucker adapted very well and so quickly.  He wants to be by your side at all times, to the point of tripping each and every family member, we have to be very careful about not hurting ourselves around here now.  He is very entertaining as you all know corgis are.  Seems to be a bit adventerous too, found him on top of his crate, which happens to be right next to the couch, and he just leaped off of it.  The top of the crate had a poster board on top of it, otherwise  I don't think he would have tried that!! Well, just today he proved that theory wrong, with nothing on top of the wire crate he was going to stand on top of it...hmmm, ouch!  I stopped him before he could hurt himself, silly boy.   Today he was climbing from one arm of the couch to the other arm, which is fairly close to one another but not quite close enough to be able to make it himself, with those short legs of his.  We go for walks and Tucker takes everything in, without making a sound, what a difference from his brother who is pretty vocal on walks, whether it is a biker, jogger or another dog across the street. Tucker likes to say hello to people to, but is just quiet about it.  I guess I have the best of both worlds, lol.  Actually, before Lance got sick about 2 months ago, we were working on having more calming walks again, and it started working and then we weren't able to go for walks with him per vet instructions.  We have been working on it on and off and will be right back working at it again, when we can.

Tucker and Lance really seemed to enjoy playing, and now with Lances ears having issues, there is no playing, except for a short video I got of them on vacation playing very briefly. I think Lance would be more up to playing if corgis had a different style of play and didn't go after each others ears so much.  Tucker has adapted well to this as well, although there are times he will try his hardest to get Lance to play with him.  He barks and barks and barks at Lance as if to say, come on buddy, lets play!!!  Lance just looks at him, like if I could, I would. It's cute and sad all at the same time. From time to time, we have to stop Tucker from running at Lance, when hes trying to initiate play.  We tell him, no, and then he goes and lays down and rests, what a good boy.

We had another recheck at the vet today to check on his ears.  Two weeks ago we were at the vet with Lance after a nodule exploded on his ear and found out that Lance has vasculitis of the ear along with his immune issues.  He is now on a med for this as well.  His medicine schedule is quite complex, I have it all written out for even / odd days.  He is on 4 different meds and one he gets three times a day on even days and on odd days twice a day.  Now we are cutting back his steroids by a 1/4 once a day and the other day he is getting 1/2, so hopefully he responds ok to this change.  Fingers, toes and paws are crossed that we will not need to see the vet until his next check up, which is in three weeks.

Lances new nick name, since his ears do not stand up like a corgis ears, is Snoopy, and the song that comes in mind for him, is Hang on Snoopy, Snoopy Hang on!!!  An oldie but a goodie. :)

Here is a picture I took of Lance and Tucker last night: 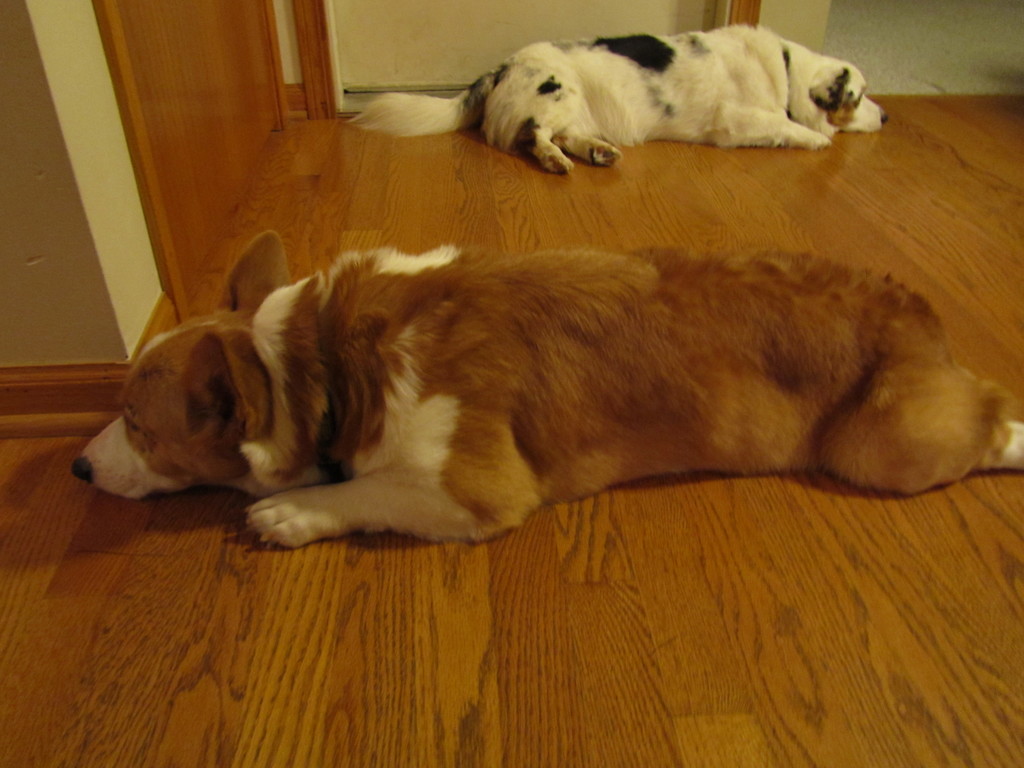 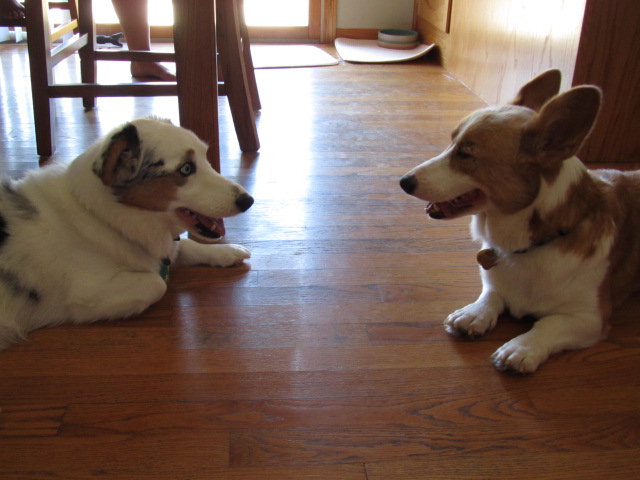 Is the medicine schedule something you have to do every day forever, or will he eventually be weaned off all medicine?

Also, happy 5 month anniversary to your family and Tucker!  He seems like a really cool guy. :]

Eventually hoping to get him weaned off of them.  It just all depends on how he responds.  We have tried dropping his steroid dose once already, but then had to go back to the original dose as his reaction was coming back.  We so hope he can be medicine free one day and this doesn't progress any worse.

Thank You Rachael!!!  I think Tucker would agree with you that he is a cool guy.  :)

We hope Lance is feeling better. We went through so many immune issues with Algy, so we understand what you're going through. It takes time but he'll get there. As long as he's with you he'll be happy! We're happy you found Tucker for your family! Their pictures really show that they're the best of buds, and that's good for both of them to have a buddy!

Hugs to both your guys!

Permalink Reply by Jane Christensen on August 6, 2011 at 8:05pm
WOW..."time flies when your having fun"...feel better soon Lance and I'm so glad Lance has you Tucker to lean on!

Permalink Reply by Geri & Sidney on August 7, 2011 at 12:36am
aw, in that second photo it looks like Lance just told Tucker a really funny joke :)

now that I look at the picture a little closer, it does!!

It really does!  LOL...I was thinking that, too.

Permalink Reply by Bev Levy on August 7, 2011 at 8:24am
That is wonderful that Tucker has been such a great addition but we sure hope Lance is recovered soon.