Here's a sample of the pics we took at our May meetup on Saturday. There were approximately 20 corgis! It was a… Continue

Just a quick post while puppy & hubby are napping. We brought Stewie home yesterday! He was the smallest boy of the litter and the sweetest little guy! Before we made our final decision we played with three Red & White boys and a tri female. One of the boys was nipping non-stop, the other boy was barking ALOT and the girl was just going going going going, total wild child. So that left the baby. He was very aware of everything going on, he played with his littermates and frapped around… Continue

Are there any Kansas Corgis Out There?

I know of one other Corgi from Kansas using this website. Just wanted to know if there were any others out there. Maybe we could organize a Corgi gathering?

My sassy girl Dixie just loves to sing! Here's a video of her singing to the theme song of her favorite show!

Ginny had a seizure (I think) today

This morning as I was getting ready for church, I came into the family room and saw Ginny laying on the floor and twitching. I walked over to her and saw that she was just trembling all over. Still holding her head up and looking at me, but she was just sort of trembling all over. I picked her up and moved her over to her doggy bed to try to make her more comfortable and sat next to her just petting her and reassuring her. She just kept twitching for a while and then it got a little worse, and… Continue

I got sick, so have been out of commission for a couple of weeks. So, here's the update - he has a name - Sir Farley - we call him Farley. He is doing very well with toilet training and everything in general - hasn't destroyed anything yet. The cats don't particularly care for him and he wishes they would play, but they are standoffish. He's kind of vocal/yippee, very social, and very cute!! Oh yeah, what's up with the coarse fur he has along his spine? I am guessing that's a corgi trait...

Squirrels are the bane of Winnie's existence. If she ever caught one, she would die happy. What would make your Corgi die happy? (metaphorically, of course!)

Bear on top of Lookout Mountain. 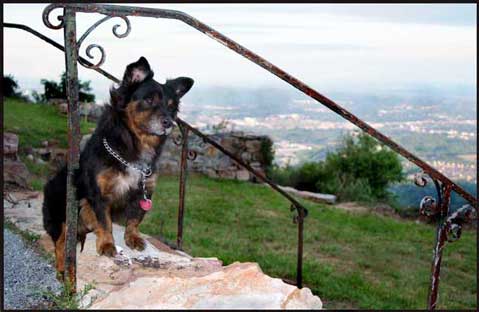 Tammey, Bear, and I, just finished helping a really sweet couple move from Dallas TX to Lookout Mountain TN. Although, we were sad to take such good people away from Texas; we were thrilled to visit thier new home on top of Lookout Mountain. I never would have dreamed that there was a town up there! I thought it was just a park with a great view of seven states, a lot of hiking trails and Historical markers, a water fall or two, and maybe a gift shop.… Continue 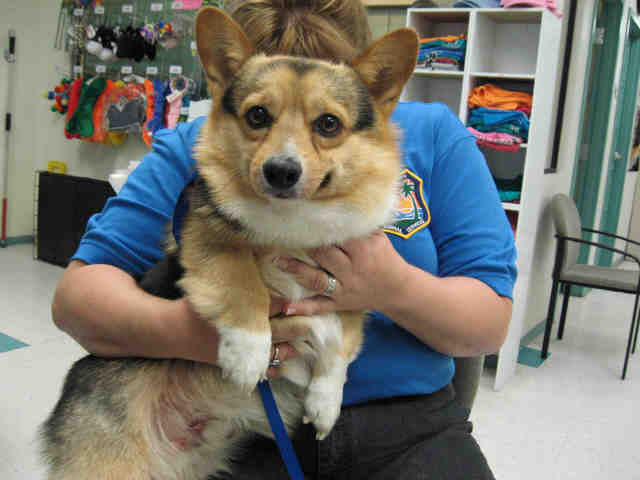 We have a new friend!!

I posted a blog entry last night about possibly adopting a 1yr old female Pembroke at my county's high-kill shelter. Faye and I went to go see her this morning and I fell in-love with her immediately. When they were in the social area they sniffed each other and didn't seem too interested in each other. I thought that was a good thing because usually Faye growls at other dogs (just the males, i think). When we went inside the office the new corgi, hyper and still a puppy, really, wanted to play… Continue

I am trying to get perfectional pictures of Fester and Winsday, where should i go??

We took Toki to Cleveland, TX last weekend to visit her family and for me and my boyfriend, Cody, to meet her parents for the first time. It was a great trip, I know Toki had a blast and my breeder shared so many wonderful tips on corgi raising with me. We also found out her dad has minor allergies and she recommended a few things for me to try.

I've never been to Cleveland before and I am one who prides herself on visiting almost every place in Texas. It was a very nice drive into… Continue

Rescuing a corgi from a high-kill shelter

She's listed as a "Welsh Corgi - Cardigan Mix," but if you look at her picture you can clearly see that she's a Pembroke. She's a year old and smaller than my 4yr old female. I have concerns because I've heard that two females usually don't get along, but I've found that Faye doesn't like males that much either. I'm going to the shelter tomorrow morning with Faye so we can meet her and possibly adopt her. Some of the dogs have kennel cough and the conditions are horrible. There have been… Continue

Jasper got his last set of puppy shots today! I feel like he's growing up so fast! He's 18 weeks old today and weighed in at a healthy 18.5 lbs. He was such a good boy and didn't even flinch when he got his shots. The only problem is that he is still a cryptorchid. I think that's just the way he's going to be, since the vet says his other testicle is all the way up in his abdomen still, but I think I'm going to wait until he's 6 months old to get him neutered just in case it drops. Has anyone… Continue

I've been looking at pictures of fluffy corgis, I just love them. I wouldn't trade Dax for anything, but I love the fluffy look! I just realized a while ago, though, that the only fluffies I've ever seen are pembrokes. And this might be a stupid question (and/or the result of me just being oblivious), but are there any fluffy cardigans? Do they exist? I want to see some pictures! :) I can't decide if the next corgi I would get would be a fluffy pem or a cardigan. I just love the cardigans… Continue

Winnie has decided that persimmons are quite delicious. Then again, she'll eat anything and everything. A true Corgi to the bone. 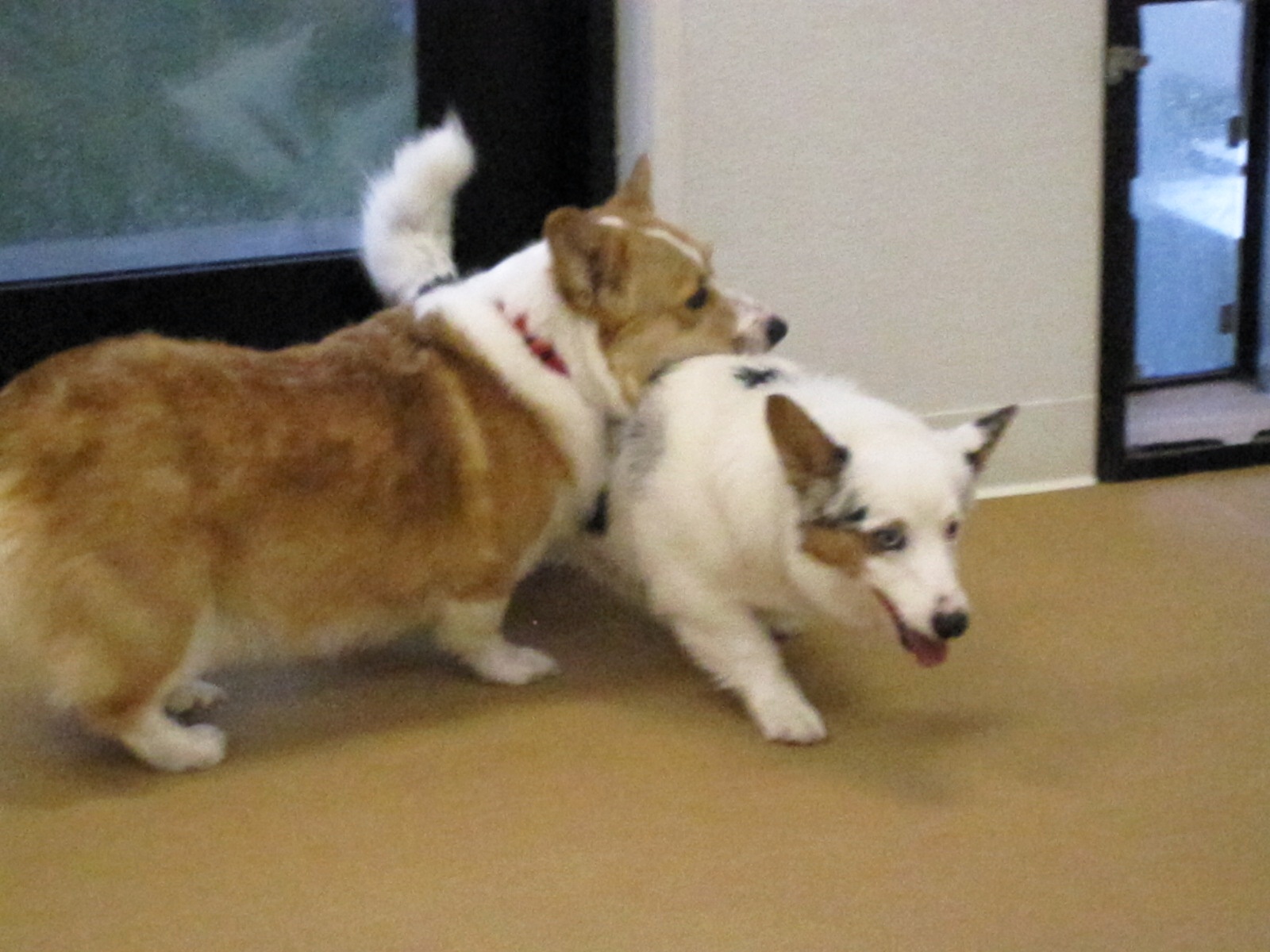 </ Ziggy in front and Reese in back 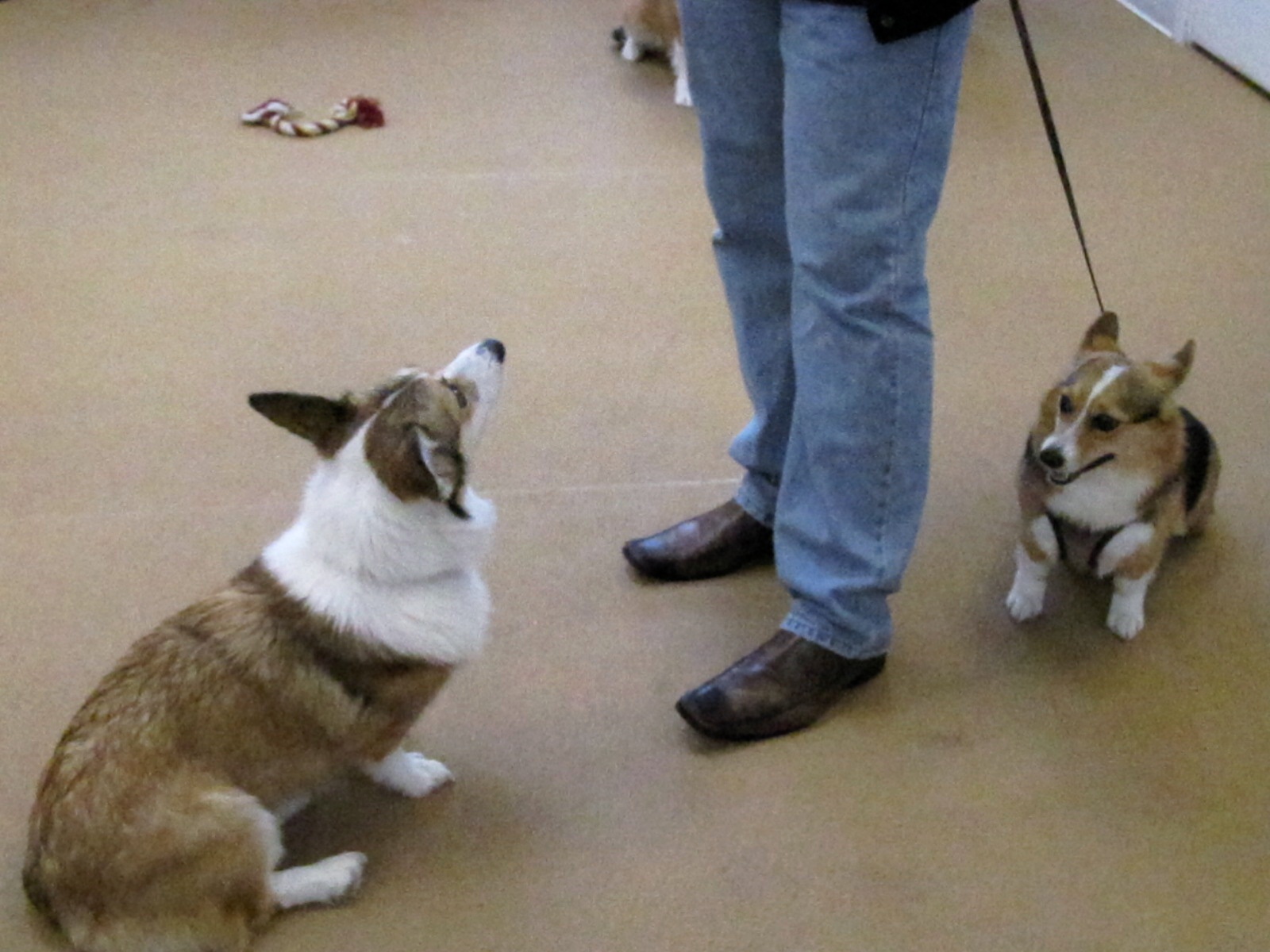 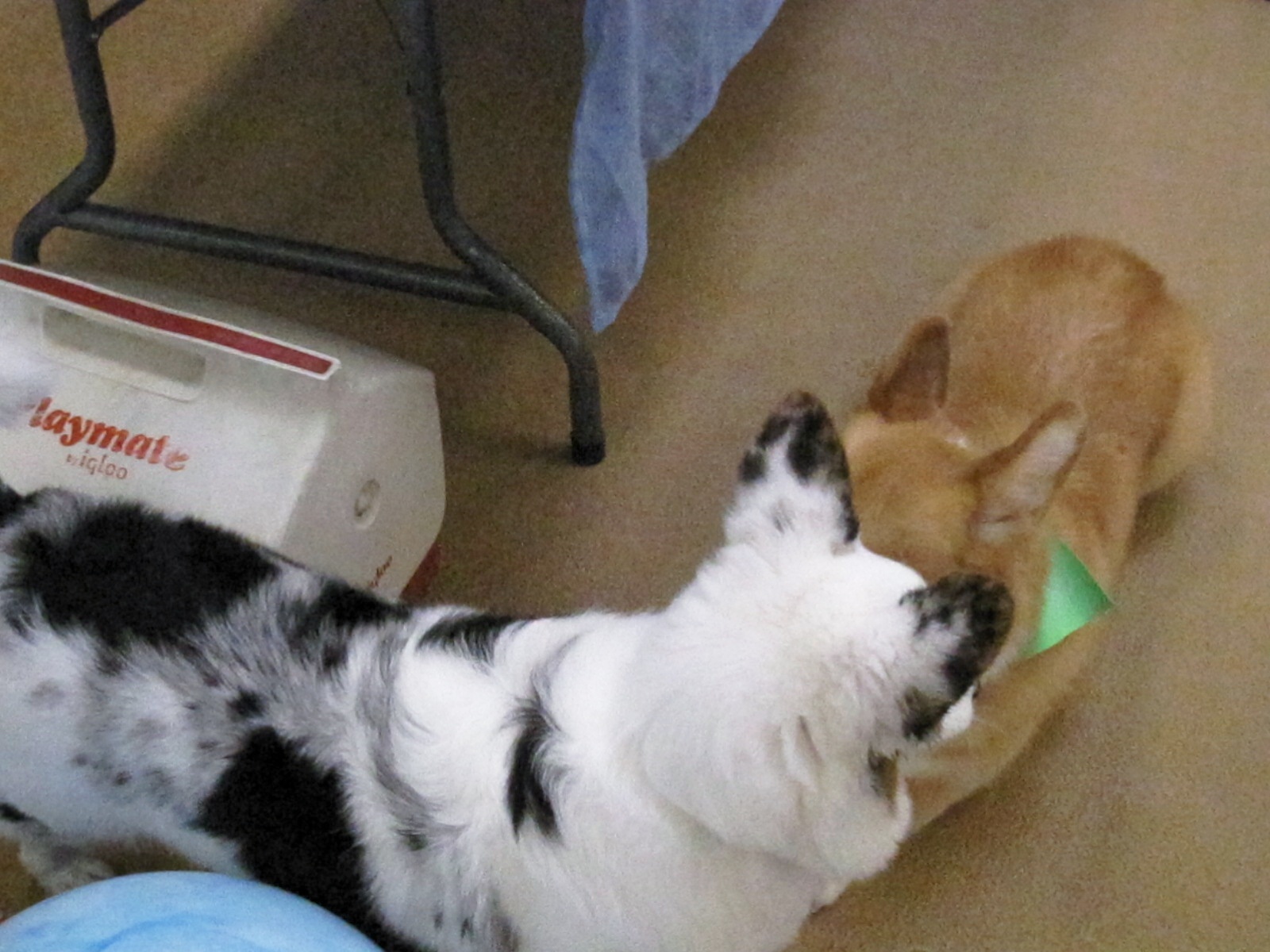 Gibson coming in from the outside area 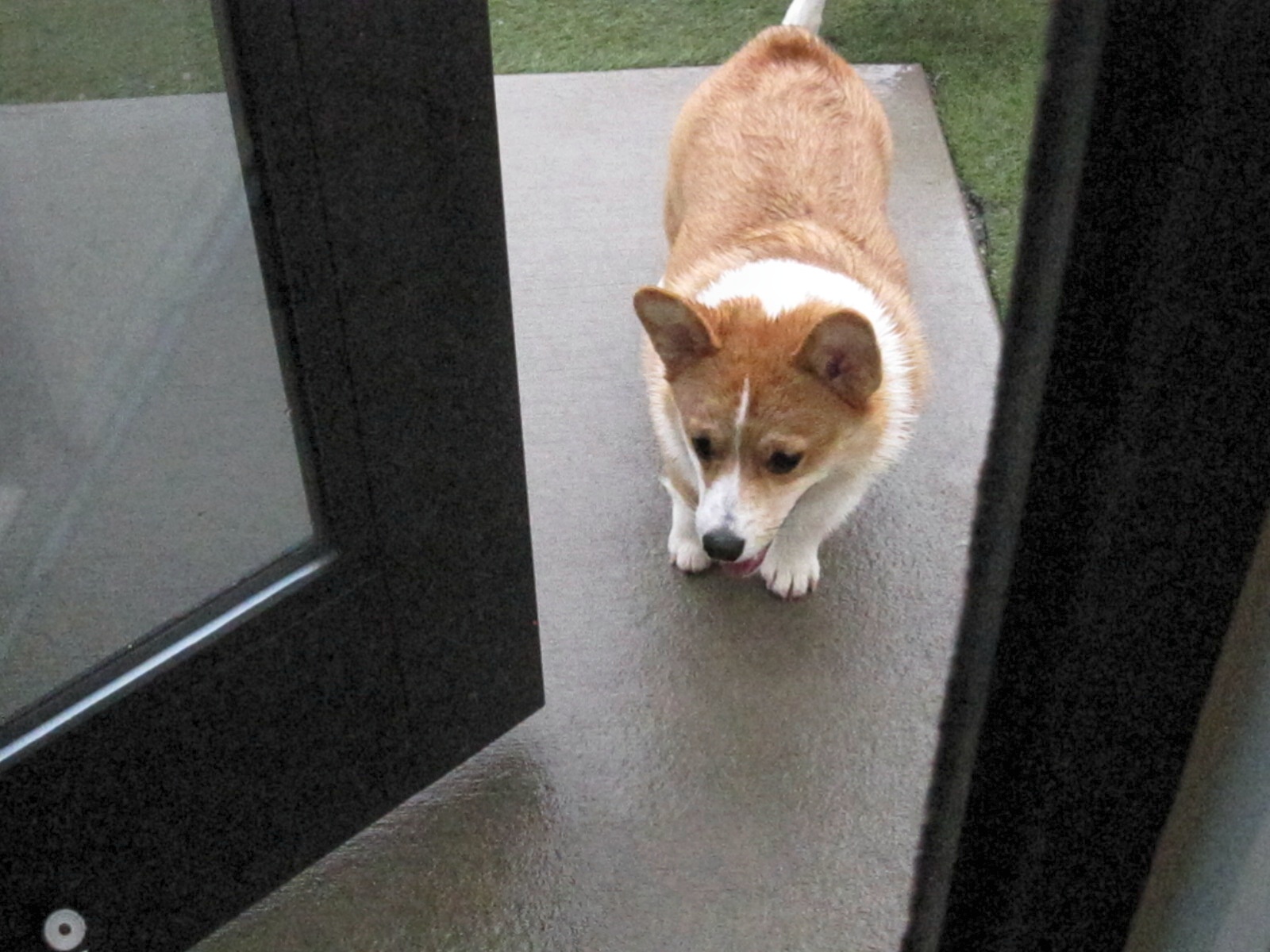 Having Fun on the ramp 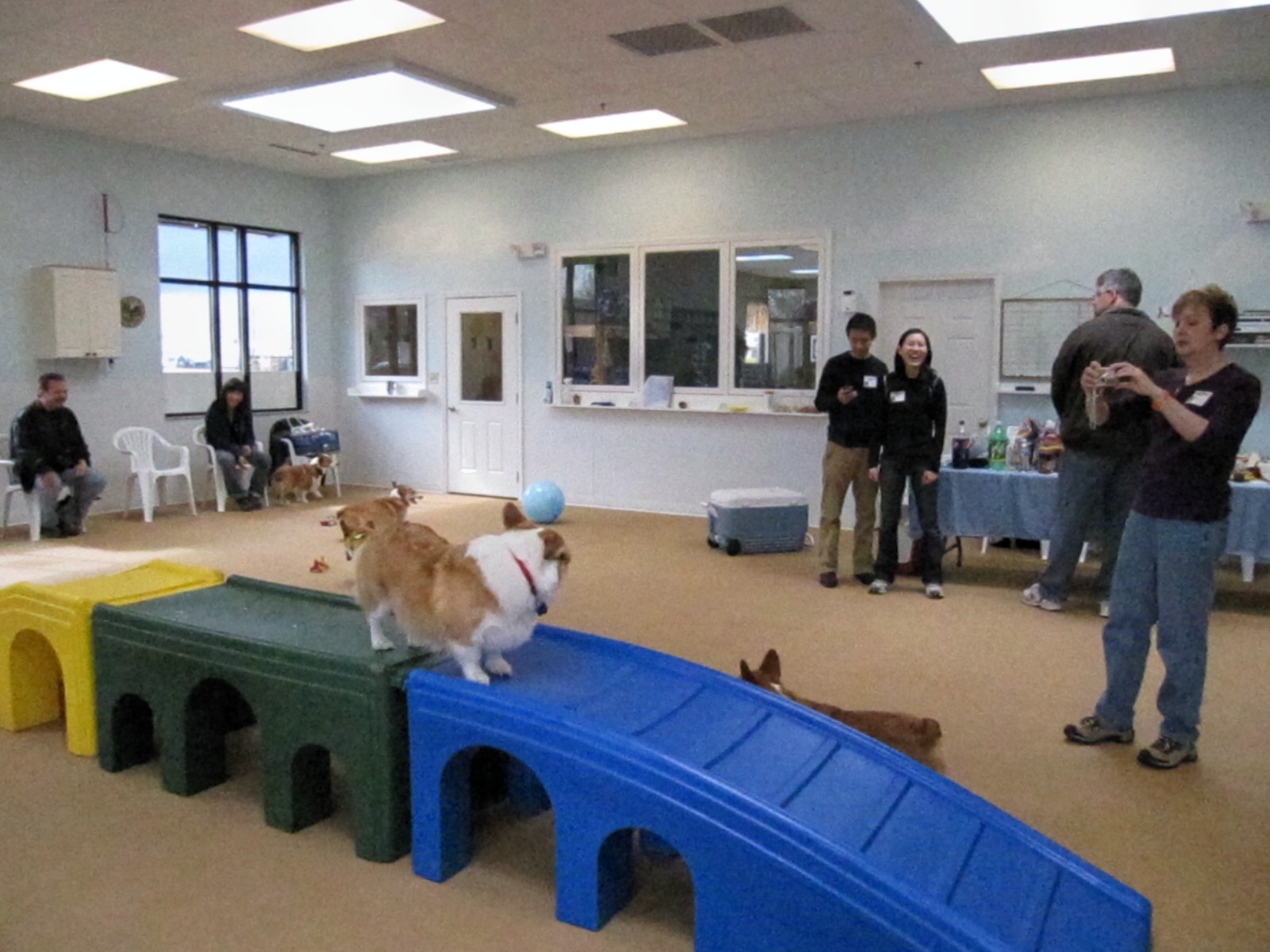 Name those corgis! Spencer is thinking: I will just sneak on out of here with Olivers toy… Continue

Charlie is shedding lots at present! He is ten months and he is losing so much fur. He is Pembroke tricolour. Is this normal? I got ten brushes full of fur off him two days in a row this week.... Any advice would be appreciated.

Eye Irritation- Do I need to take him to the vet?

Henry has some sort of eye irritation. I noticed last night that he was squinting a little with that I eye and when I checked it, it was bloodshot but I didn't see any foreign objects in it. So this morning I checked again and it's still the same. It doesn't seem to be bothering him though, cause he hasn't scratched at it or rubbed his face on the ground. I've been trying to do some research about it online. Conjunctivitis?

Also, does anyone have any advice on whether or not I should… Continue

Today the veterinarian wasn't our regular one. So the experience kind of sucked. She squirted his corona booster all over the place.. She took forever with doing his rabies vac, so Eddy got all yippy and squirmy and wiggly, and she had to get a helper. Then she lectured me, "Corgis are very protective of their bodies. Be sure to handle him a lot, like, touch his feet, his belly, his hindquarters.. that way he'll be better with the vet or when you'd like to clip his… Continue