Another Corgi won a Fido award for comedy

The movie is "Year of the Dog" it featured a tri color corgi name "Travis", anyone watched it yet?

domandtrey.blogspot.com is where I do my blogging.
Feel free to check it out. How (much) to feed a Corgi

My Corgi is always Hungry

Do I Feed Him as Much as He Wants?


Yes, Corgis are always hungry. You could never feed them…

Sunday morning, my puppy ran away. He is only 9 months old and very friendly. Hes a purebred Pembroke welsh corgi. Unfortunately he does not have his collar on. He chewed it up and I didnt get a new one for him. This has been one of the hardest things I have ever gone through. Please, if anyone has him and thinks hes a stray hes not. Dont try to keep him as your own or give him away to someone. He has a family that is extremely… Continue

the Japanese sure do loves them some corgis! :D


I've got to figure out how to decipher that site...lol.

Dudley had his busiest weekend ever since his surgery. This past weekend he attended the Kansas City Marathon and helped me with course control, went shopping at the Three Dog Bakery and made friends with two Great Danes, played with Taffy, went on a walk with one of our neighbors, made his first trip to the Bark Park (where he made many more new friends), and did more romping and playing. He did all of this and ended the weekend with only a slight limp. Hurrah! That was an action packed… Continue

She walks beside me on silent paws...

I wrote this poem for Courtney the day she died.

My only true friend...
Why do you have to leave me?
You're loyalty is true,
I can't see why this has to be...
I will miss your loving glance,
the touch of you when I'm sad..

You comforted me when I was ill,
sat by me when I slept.
Why does that disease have to kill?
I would have always kept
diligent watch over you.
My life, my truth...

No Comics this week...

I got bombarded with so much work this week! I'll put up halloween special 3 next week! Sorry about the wait!! If I don't work, Wasabi won't be able to get lots of treats or toys~~ X.X

Let me introduce Ruby to all of you out there..... 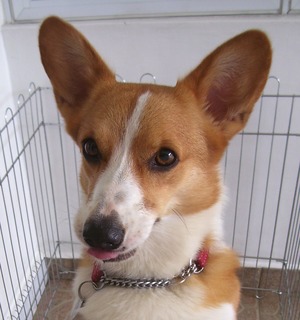 This close-up was printed in a local photography magazine. Hope you like it too.

Ruby taking a break on one of the hot afternoons.…