This acutally happend a couple of weeks ago but I have been busy and haven't gotten around to sharing.   I was sitting here one morning trying to get myself motivated to get off the computer and the couch where I was hiding out with my cold and I recieve a phone call from the school.  "one of your dogs is here at the school, can you come get it?" I look around and I have three corgis and an aussie all spread out on various pieces of furniture and the floor.  "Nope not mine must be my…

Merry Christmas and Happy New Year to all of our corgi friends and their families!  Hope you all have a happy and safe holiday.

We have snow again! My husband got up at 3 this morning to get ready to go to work just to make it there and find out they are debating about working this week since the weather is going to be bad and it is hard to pour concrete in negative degree weather. Stinks that he wasted the fuel to drive over there and that we won't get a paycheck next week, but at least we don't have to pay a hotel bill.
I couldn't go back to sleep after he left so KC and I played on the computer. I let Molly out…
Continue

First Snow of the Season

We woke up to about 2 1/2" of snow this morning. The kids were so excited and went out to build a snowman before the bus came. The dogs are having mixed reactions lol. Molly and Taz are not so impressed with the cold wet stuff on the ground. KC was running around like a crazy dog this morning playing in it. And is now laying on the back of the couch staring out the big window at it. Hope everyone is staying safe as winter approaches. 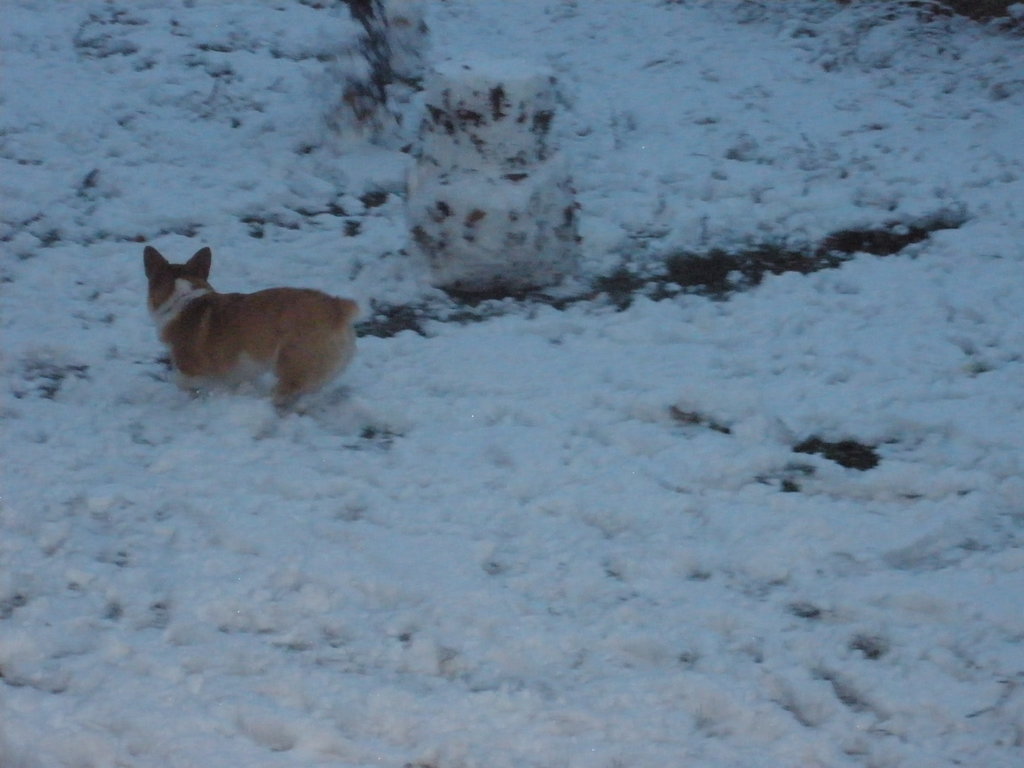 Earlier tonight my husband dug out the dog treats to see if he could make friends with Molly. We only buy the Canine Carry Out brand because Her Royal Highness KC will only eat those kind. And I swear she knows the difference between those bags and any other bag of treats.
Anyhoo, KC of course knew that dad had treats and was going crazy and wouldn't let Molly get close enough to get a treat, not growling or being mean just was all over the place and Molly isn't as out going. So finally I…
Continue

Not sure who is going to have a harder time.....

So as many of you have read Molly is in heat which means that she is spending a lot of time alone out in the sun room. I am not sure if this is harder on me or her. We have only had her for a month but during that time she has always been with me unless I had to go to town or something like that otherwise when I am home she is in the house with me and she sleeps with me at night. Every time I walk out into the other room she starts wriggling all over and is so happy to see me and then gives me… Continue

Haven't been on here in awhile. Things are finally slowing down a bit. As I stated in my last blog (I think) we moved to Endicott Washington and found a great farm house on six acres to rent. That was back the first of September. October was a busy and trying time for us. On the 27th of September (Sunday night about 11 pm) my dad, who is only 57, had a massive heart attack. Thank God my mom stopped at the fire station at the bottom of the hill (they live out of city limits in a somewhat wooded… Continue

These are some fun little "status" things I found a Facebook App I use called Status Shuffle. I thought these ones were corgi appropriate lol. a home is not a home without dog hair Be the kind of p…

These are some fun little "status" things I found a Facebook App I use called Status Shuffle.
I thought these ones were corgi appropriate lol.
a home is not a home without dog hair
Be the kind of person your dog thinks you are
Who needs NASCAR when you have dogs to watch race around the house?
You love your pets too much when you talk to them and call them your…
Continue

HOLY COW IT HAS BEEN AWHILE!

I didn't realize how long it had been since I had been on here. Life just gets so busy sometimes. Thought I would just jot down a quick note about how much fun my dogs had at my brothers yesterday. My brother and his wife moved to St. John Washington last month, and we decided to drive up for the day and see the place. So of course all three fur kids had to go too, which meant we had to take the truck so there was room lol. Levi loves our new truck, when my husband lets us have it, I put a… Continue

It has been a long time since I have had a computer working properly enough to really do much on here except check in and see what everyone is doing. Sorry for those of you I used to chat with more, wasn't trying to be rude but haven't had internet service since this summer so have been either bouncing off other peoples wireless (bad I know) or only been able to use my phone which is very limited on what I can do.
Let's see quick update on everyone......
KC is still Queen of the… Continue

Today is Taz's first birthday. Can't believe how fast this year went by. He got some toys that my son took half an hour picking out at Walmart last night, when he gave them to Taz this morning big sister KC promptly came over and took the one she wanted.

Thought you might enjoy a good laugh about KC's possible acting career. First of all, no matter what he tells everyone else, KC is my husbands dog. She tolerates me while he is at work. A couple of weekends ago Larry and the boys went to The Dalles for the weekend, I was packing their bags etc during the day and KC didn't seem to concerned, normally she assumes she gets to go anywhere we go and tries to help pack, I should have realized then she was up to something.Larry got home from work… Continue

Getting ready to move.

We are getting closer to moving into our new house in the next couple of weeks. This is going to be very nice since the kids (both two and four legged) are going to have almost four acres to play on. I personally can't wait since we got a ticket a few weeks ago for our dogs barking even though the cop couldn't be for sure it was our dogs that were barking. We live in town and the house on one side of us has a dog, the house behind us has three (a great dane and two collies) and the two houses… Continue

My internet has been down so I don't get online very often. So I thought I would just post a little update of my "kids". Levi turned one in May, and is driving me crazy because he likes to race around the yard and bark at all the neighbors and their dogs. I can't wait until our house sells and we can hopefully move out of town.
Taz is going to be 8 months old on July 3rd. He is as big if not bigger than KC, He has a few nicknames, Taz the Tank, Moose, Fatso, Chubby. Although I don't think… Continue

I just had to talk about how funny it was to watch the dogs yesterday while we were doing yard work. We rototilled up about half of our yard to plant some grass seed and KC and Levi thought it was so nice to have some nice cool dirt to stretch out on and cool off. Taz surprisingly was not involved at first; he was hiding in the house. Then he came out and you could just see him looking at all that dirt going "oh boy", he is the digger in the family. We haven't figured out where he puts all the… Continue

Well it is hard to believe since we have had him since Christmas but this weekend was the first time Taz has went on an overnighter anywhere and the first time he has been to my parents. Anyway, we went to Washougal for the weekend and took all three dogs with us (when we went out of town for Easter weekend we left the boy dogs home and they dug out of the yard and luckily my neighbor lady got them back into the yard) so this time everybody got to go. They all actually did really well, KC… Continue

OMG I just realized that Taz is half a year old today. Time flies when you have corgis. He is such a moose, and he continusly (sp) cracks us up every single day with his big old satelite ears and digger paws. He has so much loose skin on him that I am too afraid to even imagine how big he is going to be. Definately not going to be as petitie as his sister since he is already almost twice as wide and maybe half inch shorter than her. I haven't weighed him recently, but I probably should so I can… Continue

Corgi in need of help

I saw this today on my local craigs list and unfortunately I can't take on another dog right now but I am hoping maybe one of you corgi lovers maybe able to help.

Update on Levi and Taz

I just found out that the college in the next town over is going to be having a class in May on schooling your herding dogs, starts off with basics then moves on to them herding sheep then cows. I think that I am going to do this class with Levi. I told my husband he should go with KC but so far he isn't intersted. But Levi needs a job and I think this will be great for him. He is finally getting so much better about other people being around too. I know he isn't a corgi but I haven't found a… Continue

Monday KC turned 1! We got her a little doggy cake for her little family party! I can't believe how fast she grew up!

KC and her birthday Lai, she wouldn't wear a hat lol. 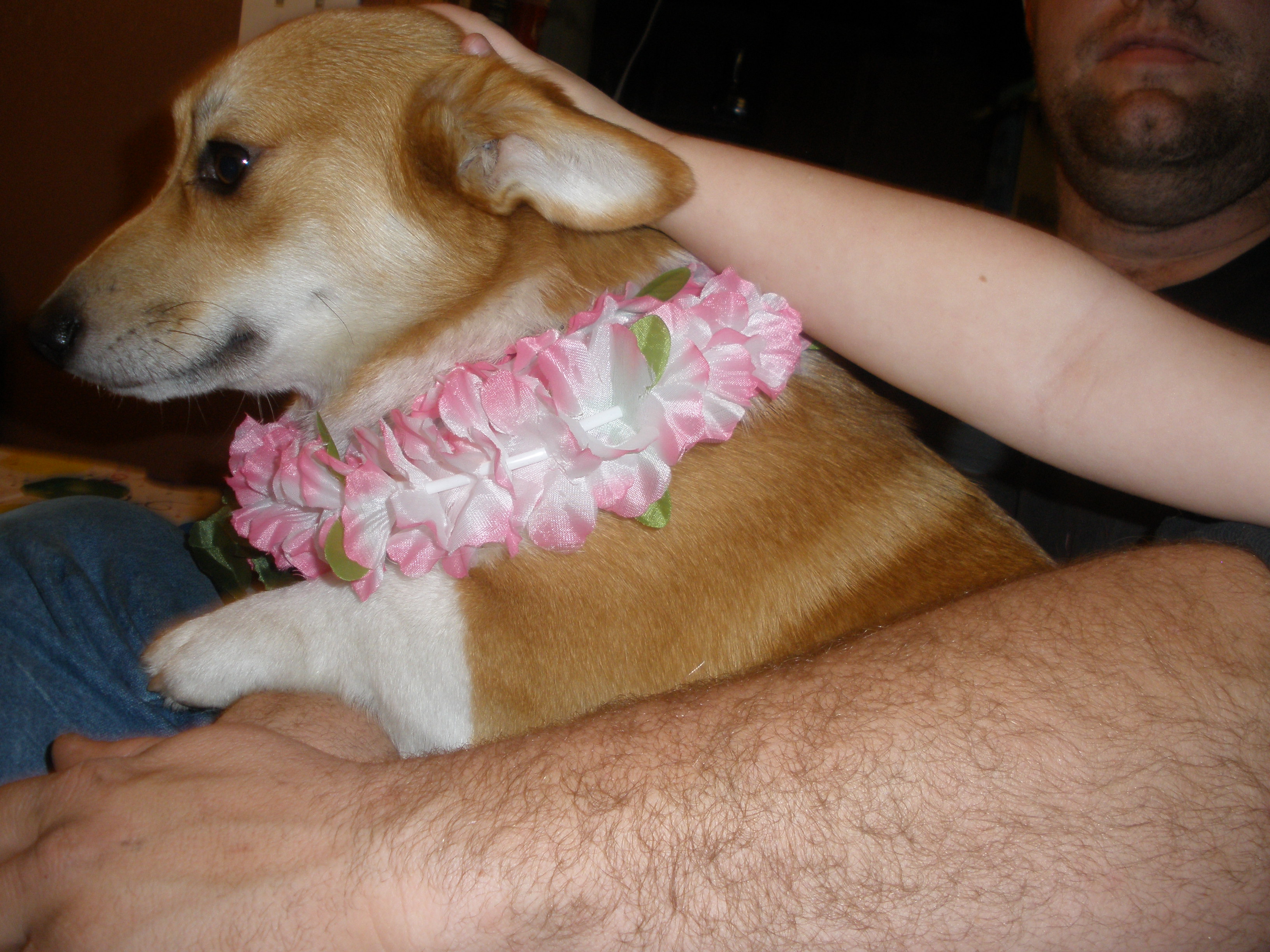 KC and her cake - she was not really impressed, Levi ended up eating it.… 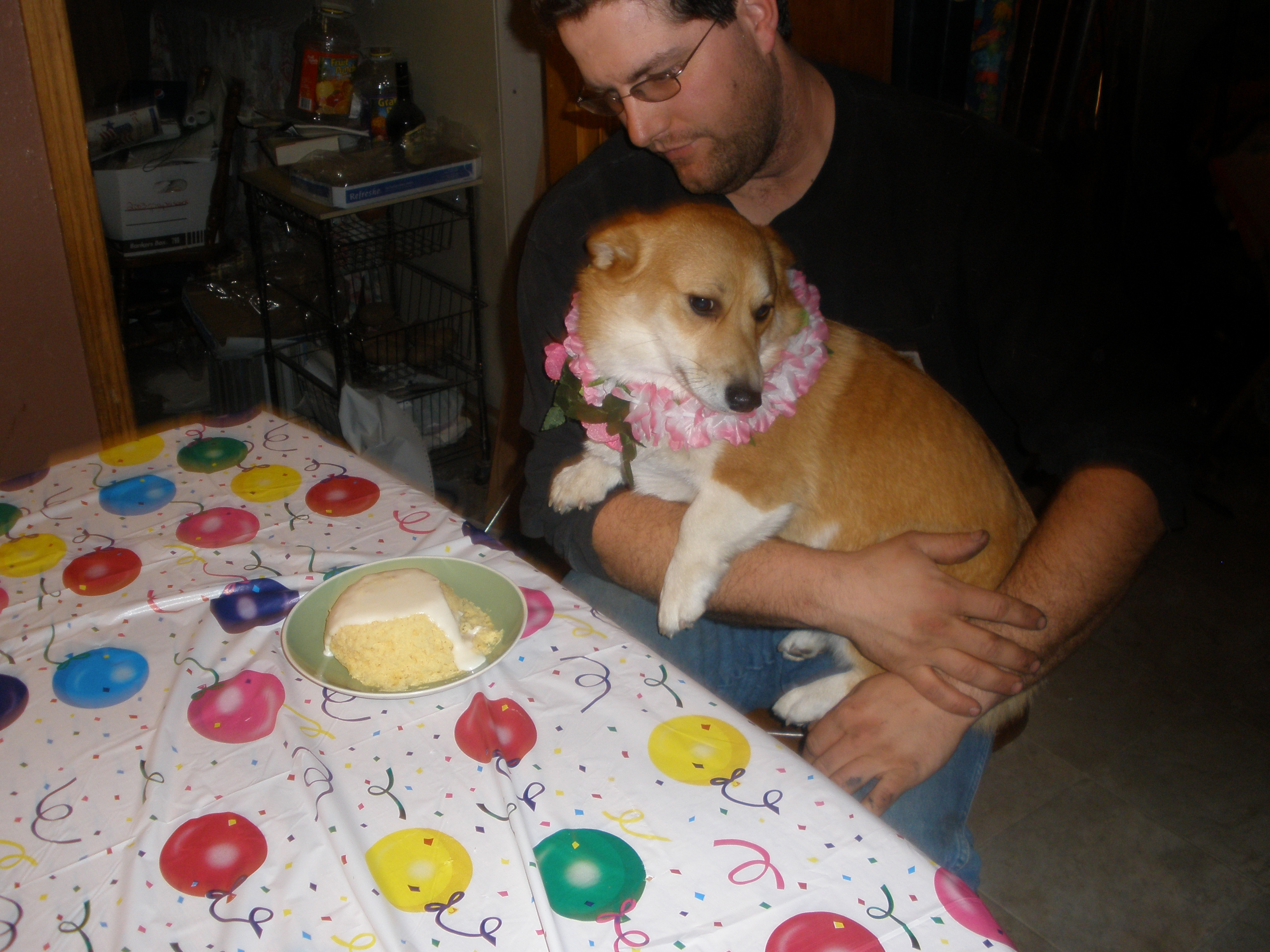