The vet had called me earlier this week to tell me that Casey's stool sample was positive for Giardia.  I was a surprised to hear that since his stools were firm and we had been so careful when he's outside in our neighborhood.  He's now on Metronidazole for the next week or so, and I've Lysol'd everything and washed all his towels and soft toys.  We don't have our own yard, so we're also being super careful about where he goes to the bathroom and cleaning up after him really well too.

Since yesterday though, he's gotten diarrhea so his poop schedule is off.  It's been a little difficult to know when he has to go since he's still potty training too.  I'm going to get some pumpkin for him and hopefully he gets better soon.

I had also planned to take him to a dog event this weekend and he has his puppy class on Tuesday, but is he ok to be around other dogs?  I know this parasite is highly contagious, so I just want to make sure it's safe for other dogs to be around him.

In other news, he's 14 weeks old today and is growing so fast! 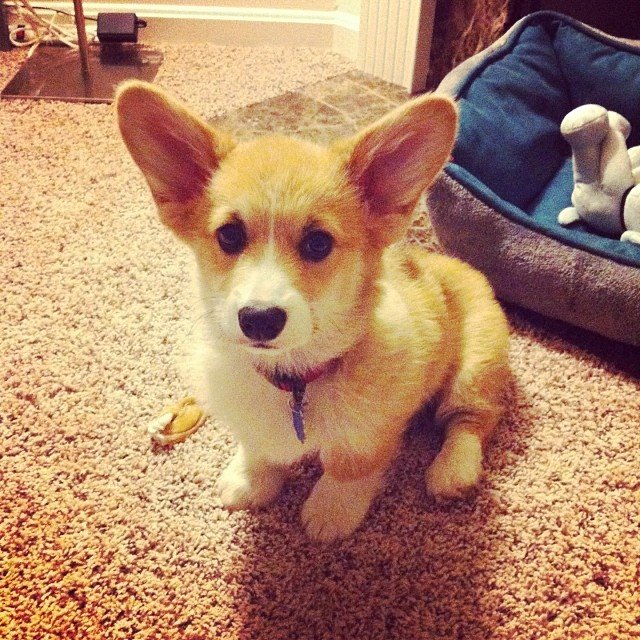 Oh, poor Casey...hope he feels better soon. I would ask your vet as to taking him to class since he will be on the med for awhile and of coarse...not if he still has diarrhea!

If his stools were firm, why was he being tested for Giardia?

Ordinarily, when someone says, "I had Giardia...", I discount it -- when I ask, "Were you diagnosed with Giardia?" the asnwer is "No, but I was really sick...."  -- but if he tested positive, you want to be careful about hygeine so it doesn't spread to the rest of the family.  Not a good time for other dogs to be eating his poop.

I'm skeptical about commercial products -- they will sell us anyting we're willing to buy -- but  2% bleach solutions kill just about everything (not pinworm eggs), and Giardia is quite heat-labile.  Hot water and soap.

He's almost as cute as Al.

The stool sample was requested from our 1st vet visit, so they weren't specifically testing for Giardia, just for overall wellness testing which happen to come back positive for it.

Thanks for the tips on bleach and hot water and soap.  Saying that Casey is almost as cute as Al is quite a compliment!  Al is a very handsome pup!

Permalink Reply by Beth on November 15, 2013 at 3:04pm
Hope he feels better soon! I'd be inclined not to take him to areas where you know lots of other dogs will be. It's just so contagious. It's usually just a nuisance by itself, but if concurrent with another bug that can cause diarrhea, it can be dangerous, especially in pups. So I think I'd err on the side of caution and keep him from events til he tests clear.

Walks are ok because people don't have a reasonable expectation of avoiding environmental contagions on a walk. But you expect puppy class to be safe....

I never heard of Giardia. Is it common? He is so damn cute! Hope he feels better soon.