Corgi in Deperate need of home in Illinois!!

If someone out there around Illinois is looking for a male corgi, there is one in DESPERATE need of a home. He is in Springfield, IL being kept by an animal control center- not sure how long they will keep him before his time is up. He is on petfinder.com

Permalink Reply by Amy Freed on March 12, 2011 at 8:40am
Just emailed them as he looks like what I want.  Don't know because I am so far away, but there might be a relay system in place.  We are a resort area where people from Ohio, Indiana, Illinois have summer homes or vacation so one would think it wouldn't be difficult.   I've been looking at petfinder every day at least twice and didn't notice him.  He's beautiful!!  Sorry, handsome!!

Permalink Reply by Jane Christensen on March 12, 2011 at 9:05am
We're keeping our hands and paws crossed Amy!

I called the shelter.  Gilligan is 7 months old, was received by them on 3/4/11, neutered on 3/10/11 and they do out-of-state adoptions.  They are NOT a no kill shelter because of space contraints, but plan to keep him a little longer because he is young.  He had a open sore on his neck which is being treated.  They will do the relay thing as long as there is proper documentation and a couple of phone calls.  They didn't know if he had a tail.  The cost is on their website.

Because he is only 7 months, I will not pursue this one.  I'm not good with puppies and too old for one.  You know the saying "You can't teach an old dog new tricks".  In this case, I would be the "old dog".  LOL!!  I sure hope someone finds him as he appears to be a great Corgi!!

Permalink Reply by Beth Walker on March 13, 2011 at 12:07am
I would love to adopt him myself, but I just adopted a rescue today that I had lined up for a week, otherwise I would have adopted this one, but I love my new rescued corgi. He had been left in a high-kill shelter, hard to believe anyone could do that to such a sweet dog but he now has a forever home. Picture of my new rescue "Louie" found on petfinder. 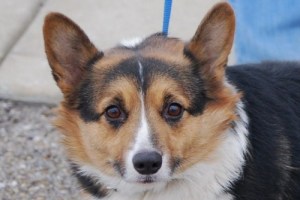 Permalink Reply by Rebecca on March 14, 2011 at 10:17pm
Congrats on your new Corgi, so happy for the two of you. He's adorable. Its  a wonderful thing to rescue these beautiful dogs.  Yeah i don't get it how people can give up these dogs are mistreat them, they are so loving.

Permalink Reply by Jane on March 13, 2011 at 5:52pm
Does anyone know if the Lakeshore corgi rescue knows about this guy?

Does anyone have the # for the shelter.