I picked Edward up around 1pm yesterday to bring him home following his ACL surgery. Typical Edward style he had shredded most all of the bedding in his kennel and chewed out and probably swallowed his IV port!!! uhhhh...then right before I picked him up he chewed 2 of his stitches out. He had been leaving the incision alone but guess he got bored. They didn't realize he had chewed them out until they cleaned out his kennel later in the day. I got a call from them for a heads up to put the cone on him when left alone. He had some oozing from the incision because he had done this, but was told by vet not to worry about that as it won't affect the incision healing. He is on Rimadyl once a day for pain, cephalixin(sp?) for antibiotic coverage twice a day for 7 days and tramedol for pain as needed. I had a sleepover in his run last night because I didn't want to put the cone on him and he did really well. I am a little stiff and sore though!! Ha, Ha

Permalink Reply by Keri&Merlin(Judy&Alan's Pups) on May 12, 2012 at 5:50pm
I slept on the family room floor with Merlin thru his first surgery and then the second on the other hind leg.What We don't do for Our fur babies!,Hope all goes well thru the rehab as he progresses.When Merlin started feeling like frapping and wasn't allowed,was hard.Take care.

I am glad he is home and did well through surgery. I found a great cone at Pet Supplies Plus that is a softer material and much more comfy to wear when Sparty had surgery and had to wear one for a long time. If Edward needs the cone much longer it is worth the investment. Good luck!

Glad he's home...as for the floor been there, done that and I know I'm not as young as I used to be!

I slept on the living room floor with Brodie after his neuter when he was a conehead! Yep, what we won't do for them, huh?

I am putting the cone on him tonight. I tried an inflatable type of one from Pet Smart in a Medium size but didn't work. Bev was yours an inflatable styled one?

No mine was not inflatable, it was a regular shaped cone but covered in nylon. It collapsed a little when he would lay down so was much more comfortable. He had to wear it for a few months due to a eventual removal of a cancerous toe. 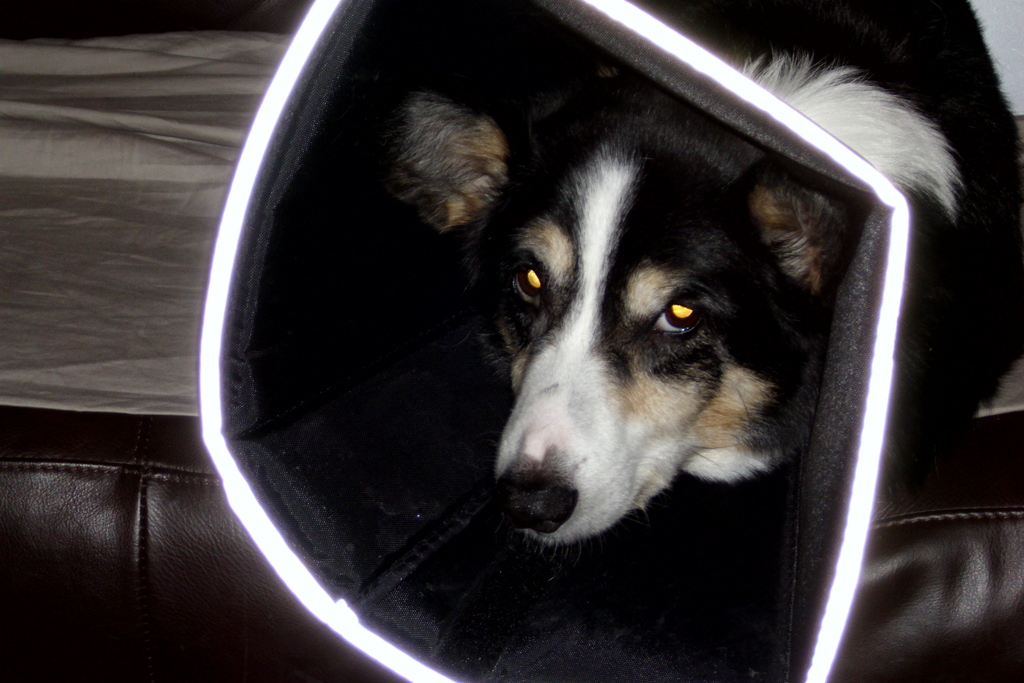 I could entitle this "If looks could kill! " but actually he did quite well with it.

I think most of us are just shaking our heads and saying yup..........that is a Corgi.  So glad Edward is home and doing well.