Our Cardigan, Rusty, has published a blog where she shows that Corgis are not posh dogs. I hope you enjoy reading it: http://intelligent-dog.com/dog/posh-dogs/

Thank you to those who sent some lovely comments!. I was asked would we run the property as a B&B more than likely not!. I have been in the Hospitality Industry for 30 years as of next year! I could run it as a B&B with my eyes closed!. We want to keep it as a private home!. we will always have people stay not paying guests though!. Paul works in Mental Health so we help people in need but I find with most of Paul's friends they are always around when they…

Re Sale of House

Hi All well the latest update is we exchanged contracts on our house  late Friday June 21st we are going thru the 10 business day cooling off period which effectively started Monday June 24th and ends at 5pm Friday July 5th!. Normally it is only 5 business days but a lot of the time an extra 5 is requested. Last Thursday June 27th we had the building & pest inspections done we passed with a good report!. It has been a very stressful time for Paul & I the real estate agent has been a…

Rusty was our first corgi.  He was born in April 1999, and we adopted him in November of that year.  He and I bonded extremely tightly right from the start.  He was an extremely sweet boy and went everywhere with me that I was allowed to take a dog.  Most of our relatives live several states away, and he loved to travel with us to visit.

When he was 7 1/2 something went horribly wrong with his back.  The vets never did figure out exactly what happened, but Rusty lost the use of his…

Any other East Lansing, MI Corgis??

I live in East Lansing, MI right now because I'm attending Michigan State University.  I was wondering if anyone had a corgi near this area because I'd love for my little Chiba to socialize with other corgis.  If so, please let me know!

I posted this as a discussion, but maybe it really belongs here.

We lost our paraplegic corgi last fall, and I think i can part with his wheelchair now if it will help some other corgi who needs it and whose parents can't afford one.

Just contact us through the site if you or anyone you know needs it.

I want to reunite my corgi with his siblings..but how!?

I got my corgi in Gilroy...from a breeder named WIlliam D Simmons....

I'm ashamed to say I didn't do my full research when I got my pup, but he's healthy and doing great! I know he had a fairly big liter but when I contact the breeder about any info (I know it's probably private info too) but he doesn't know. isn't that weird? *shrug*

Today is Noodles 8th birthday! My how the time has flown by. I made his peanut butter birthday cake last night and first thing this morning, he ran downstairs and started licking his lips. I told him we will party after work. I don't think he appreciated that statement because he gave me a little grumble under his breath. We purchased him a food & water stand in order for his bowls to be up off the ground. Of course I had to measure him first to make sure what size stand to get, but I…

After years and years and YEARS of waiting, I am proud to be picking up my first show puppy in less than a month!!  Am Can CH Kingsbury Tail Ridge Road (Jake) x Am Aus CH Cambrian My Way (Casey) born March 29, 2013.

I am already planning to take him to a specialty 4-6 mo puppy class on Labor Day weekend, and then our first show in Rockford-Freeport the day he turns 6 months on Sept 29.

So excited I can't hardly stand…

My boyfriend and I just picked up our 8 week old Pembroke Corgi on Saturday (6/22) and we couldn't be more excited to have Frolic with us!

We love playing with her, but she gets tired of her rope and bone within 10-15 seconds and then she bites us.

Can anyone offer any play toy suggestions that will keep her occupied and challenged?

Proud of my Little Man

I play softball every Thursday night and always bring Sterling with me. (Of course he always has water, ice cubes, and a squeaky toy) This week was particularly hot so we headed to Dairy Queen for some ice cream afterwards. After ordering my blizzard and sitting down, a little boy came running up to him and threw his arms around his neck without saying a word to me. Luckily, Sterling loves kids (a sentiment I don't really share) and tolerated this little boy putting his hands in his mouth,… Continue

Looking for a pup

I joined MyCorgi.com, in hopes of getting some help finding a pup.
I live in California. I'd like to obtain a pup soon, as I'm off work for the summer, and have the time. I'm looking for a dog between about 6-12 months old, as I don't want to leave a baby too long, when I go back to work. Any help would be appreciated.
Jan

My baby boy is 11 years old!  I can't believe it!  He is my buddy, my shadow, my sidekick and I don't know what I would do without him.

Hubby and I had a disagreement as to when his birthday was, I had to pull his AKC papers to show him.  While I was doing that I decided to google his parents.  Don't know why I didn't do it a long time ago.

His father is CH Highleigh Whatchamacallit from S. Africa.  Now I know where he got his big boned look from.  Other than the fact that Max…

So this wont be until March(ish)
A couple friends and I are planning on a fun vacation down to Florida come March(ish) and of course Ace will be going with me.

We are going from Oregon to Florida and i was wondering how well Ace will hold up there..

He seemed to do wonderful in Oklahoma but there is that Chance that I dont want him getting heat exhaustion or anything.

If I could get some input it would be greatly appreciated.

(Ace is my Service dog so…

WE WON!  well, by "we," i of course mean machete and his adorableness! (mr. fluffy floofy pants on the KONG bed he so loves & adores)

just got this e-mail:

Congratulations. You and Machete are the winner of this week’s KONG contest. We will send out your prize package ASAP, we just need to grab the…

Having a dog is something I wanted for such long time.  After long hours of research, talking to friends and a ton of Dogs 101 on YouTube I did narrow down my research to two choices:  An Italian Greyhound or a Corgi.  I just wanted a dog….and not being inclined to a breed helped me…….

I ended up going for a Corgi.  After  having put together a list of breeders in SoCal area,                 I chose one……..Never have I been as excited……the anticipation of picking him up, choosing a…

Poolside With The Pups

We went over to my folks' place today for a swim. Princess Zoey mostly lounged on the top step. I couldn't keep Tucker out of the water.… 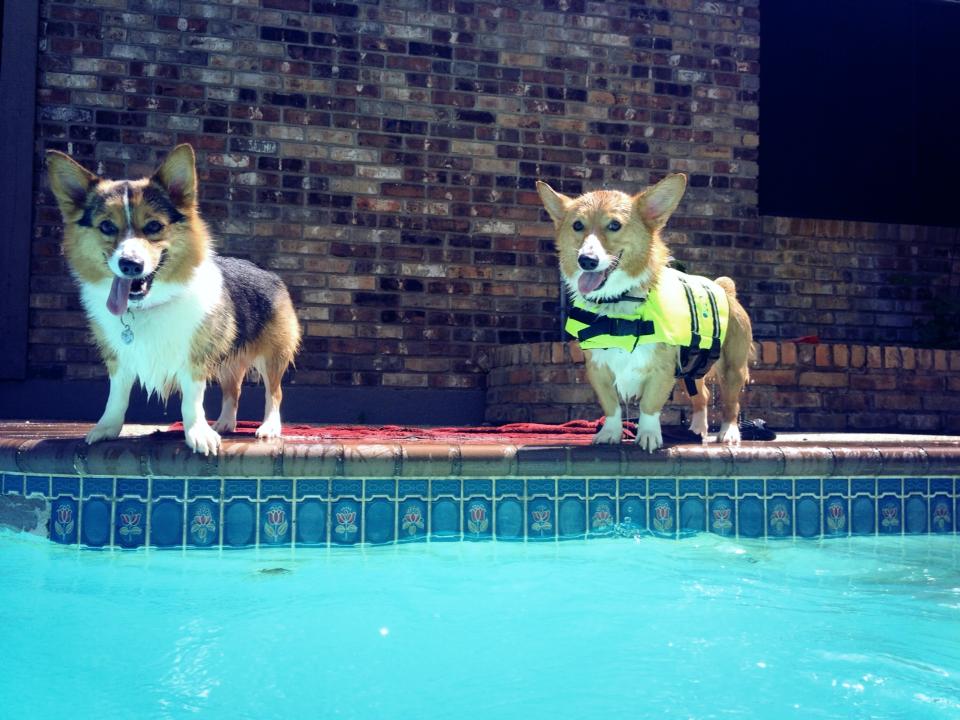 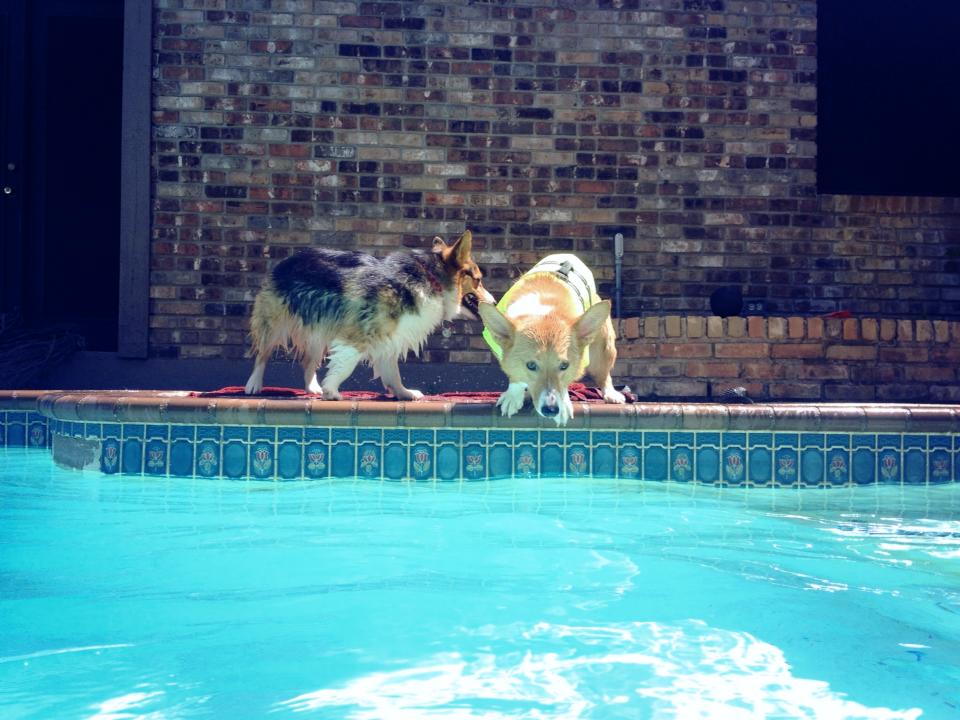 Becca got her Rally Novice A title today! It was a very difficult venue, the pulling barn on a fairgrounds. There were horses on the track, swallows swooping, roof noises, and best of all horse manure mixed in the dirt. The judge was lenient and we scored a 94 and third place. We are entered again tomorrow. I need to decide whether to go, or scratch. She is not ready to move up to Advanced and it is an 80 min drive.