Bryson had a most "interesting" experience with a herding instinct test this past weekend: 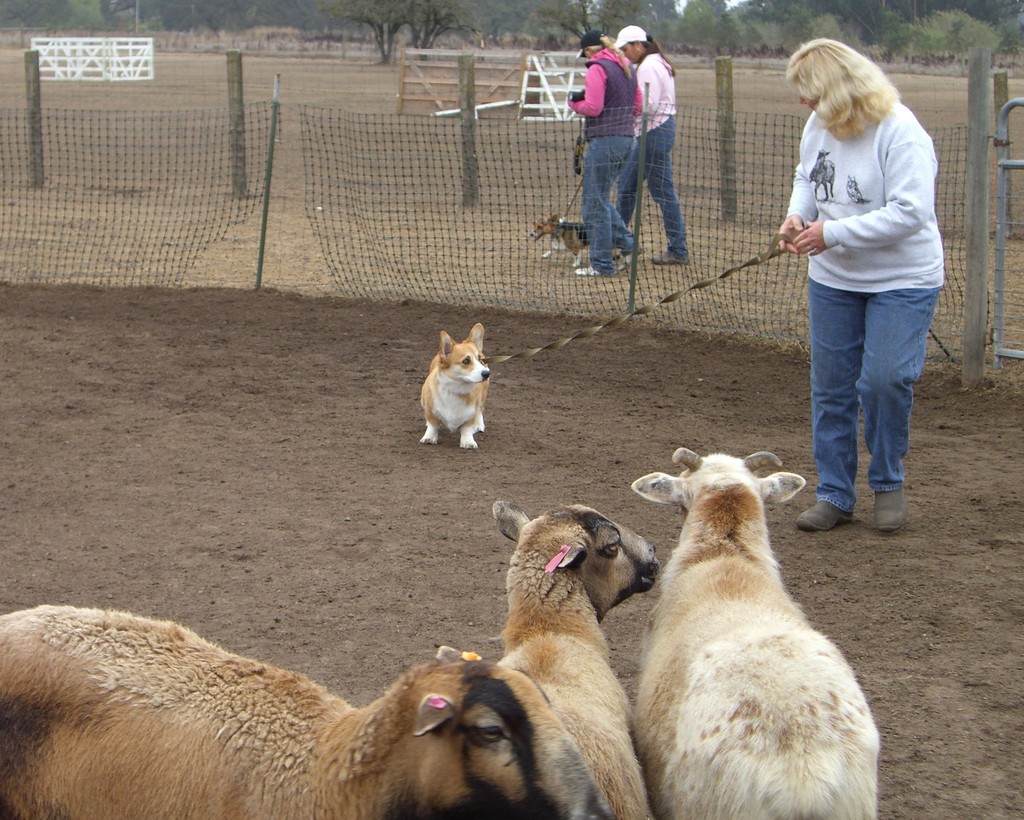 It was hosted by the Golden Gate Pembroke Welsh Corgi Fanciers, and held at the Shepherd Ranch in Santa Rosa, CA

Service dogs not just for the blind

At first glance, Gizmo might not look like your typical service dog. Maybe that's why people frequently ignore the "Please don't pet me - I'm working" sign she wears in public.

The 8-year-old Welsh corgi is less than half the size of standard service breeds such as golden or Labrador retrievers and, unlike the stereotypical assistance animal, she doesn't guide the deaf or the blind.

"We're all familiar with guide dogs for the blind," said Gizmo's owner,… Continue

I'm posting 4 to 5 halloween special comics this month! Halloween Specials 1 and 2 are already posted in the comics section at corgicomics.com. Wasabi will resume going on her normal adventures starting next month =D

Check Out My Blog

Here's my dog blog all about being a first time Corgi owner. It follows my trials and tribulations of raising my new puppy, Theodore. Check it out. 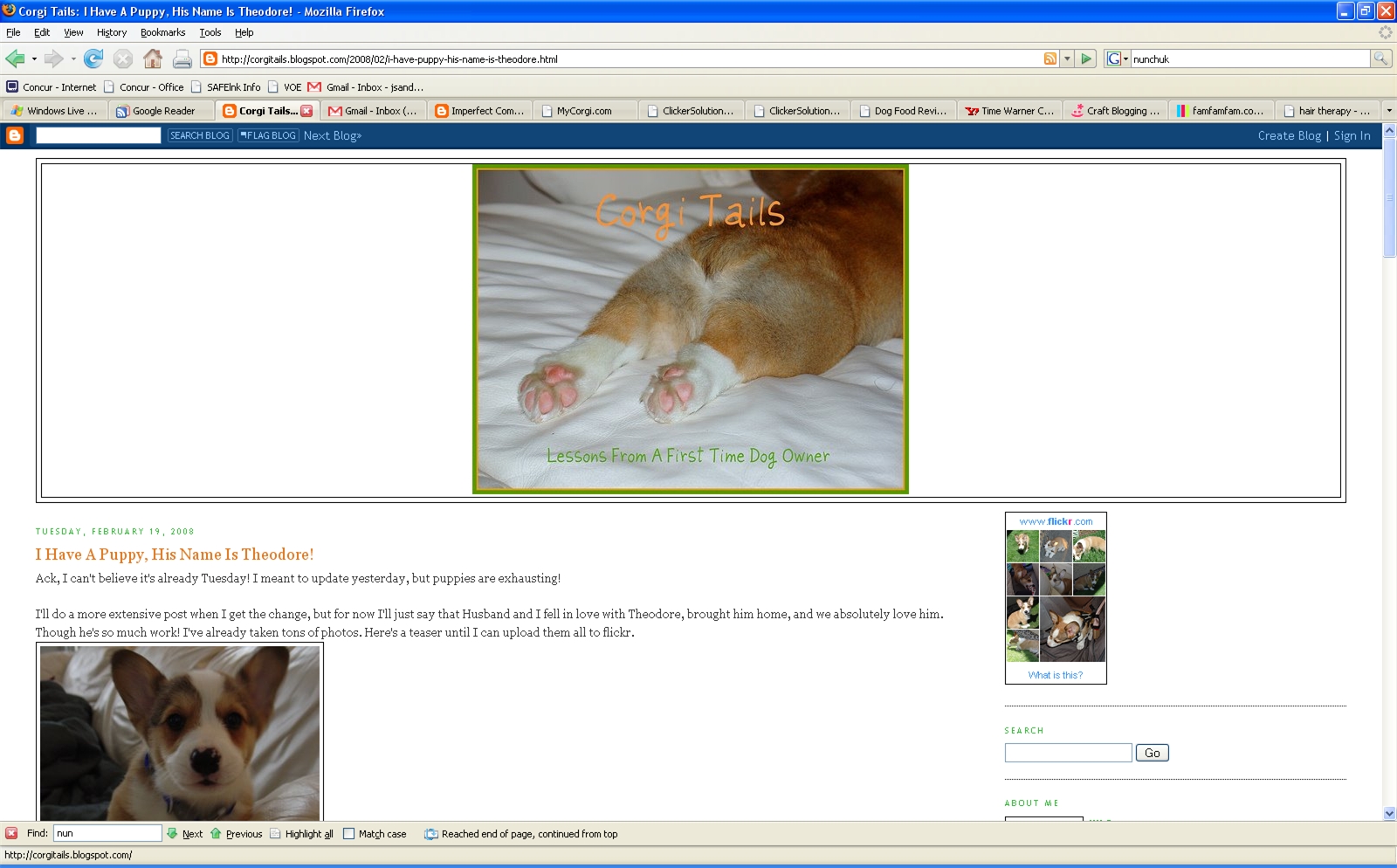 Video of the day

Can't get enough of Bryson? Check out his blog: 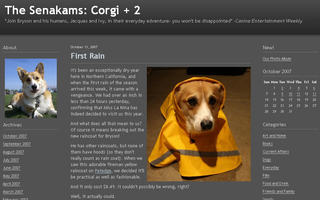 You'll find postings about his buddies...…

The Monster and It's friend

Ever since our puppy was little she has never, never liked the vacuum cleaner. We tried in her puppy socialization class to get her to at least tolerate the vacuum cleaner, but it never worked. Now when I take out the vacuum she goes over to the side of the room by the fire place and sits on the hearth of the fire place. Her ears go out straight - the Yoda position as we call it - and she sulks and freaks out. We have to "kill the monster" when we are finished with it. We wrap…

Today Dudley got his last stitch removed. We're just ending week 2 of rehab and I have to admit we've caved. Weeks 1-3 of rehab were supposed to be only walking on a short leash and crate rest. Yeah, try telling a puppy crate rest. Plus there was some mix up in our instructions. When we brought Dudley home from surgery they encouraged us to walk him. But when we took him back to get his first set of stitches out they assumed Dudley had been on total crate rest. When they instructed us to work… Continue

Great news! We've fixed and added the Flickr widget! Now importing pictures to your corgi page is even easier!

And the Oscar goes to ... the Queen's corgis

(four corgi stars of the film and their trainer and owner, Liz.)

Friends and family of nominated film stars are often nervous on the eve of a big cinema awards ceremony. For dog owner Liz Smith, the run-up to the first ever Fido Awards at the London Film Festival on 28 October will be tense indeed.

ALTAMONT - Merry Barley's Welsh corgi usually only wakes her up in the middle of the night if she needs to go outside.

Early Sunday morning, Hannah the corgi jumped on the bed and woke Barley for a different reason - the house at 16094 Kiowa Road was on fire.

"I owe my life to her," Barley said. Barley said she woke at about 1:50 a.m. and wondered why her house was so bright. She thought she had left a light on somewhere… Continue

Moira absolutely kills me! This one left me dumbfounded.

I was lying on the futon with Tank (the Cardi x) and we were enjoying a quiet afternoon. Not for long. Moira hit the doggie stairs at a dead run. She turned in the air and football tackled poor Tank. She sent him sailing about two doggie-lengths. This meant she was now the owner of the prime spot next to me on the futon!! I have never had a dog do that! Totally cracked me up! I wish I had a video because you'd never believe it… Continue

Biggest Corgi Toy in the World We have been struggling the past couple of months. On August 29th we brought our 6 month German Shorthair Pointer Jager home for good. Before this she had been at the breeder's being trained to point and hunt. We brought her home for a couple of weekends to get her and Mac used to each other. She is now 50 lbs and our little corgi is only 22. Since Jager is only 8 months old now and Mac is 2 1/2 years she likes to play a bit more than Mac.

We have to feed them separate as Mac gets a…

These were installed to coincide with the 50th jubilee of Queen Elizabeth II. As New Zealand is a member of the Commonwealth, Queen Elizabeth is also the Queen of New Zealand. And, the queen is well known for her corgis. The corgi at the back is sniffing a dropped ice cream.

Light to the lonely

VANDALIA, Mo. — Imagine living in a crowd but feeling lonely.

Imagine living in a place where an innocent look can lead to a brutal fight.

Imagine living through the worst day of your life in a place where hugs are against the rules.

That is the life inside a maximum security prison: the Women's Eastern Reception, Diagnostic and Correctional Center in Vandalia…

My corgi needs a corgi playmate! Does anyone here live in northern colorado?

Landscaping with your pets in mind

Karen Basso lives on about a third of an acre in Fresno, Calif. As a Master Gardener, she obviously loves to garden. But she also loves her two dogs.

But can they coexist? Can she have a top-notch yard with a colorful variety of plants and not have to worry about whether her pets will be snacking on it? Or, worse, getting sick from eating the plants?...Details