So Winston, Midget and I are doing great. I have lots of pictures to post eventually! I've been working a TON so when I am online it is not for long!
Winston has had some problems lately though. I think I finally got his allergies under control. I believe he is allergic to chicken, duck, lamb, venison, and beef... Pretty much all he can eat is dog food with fish as the protein! Crazy right? Also, Winston has decided he wants to be food aggressive now, so I have to watch him…
Continue

Hello all - Sorry Winston and I have been so busy lately and have not had internet so we have not kept in touch with our fellow corgis and corgi-lovers. We are still living in the same apartment with Midget, the feisty little Chihuahua-Beagle mix, and they get along great. I am currently working three jobs.. Retail, restaurant, and a pet daycare/boarding service! Crazy, right?! Well hopefully we will be on here more often, I hope everyone is doing great!…
Continue

So Winston has terrible allergies. I thought they would be gone once the colder weather came, but last night he was chewing himself up terribly :( Has anyone ever dealt with this? I was going to give him Benadryl but I'm not sure how much I should give him... I know that it is safe to give to dogs in small doses... I should give my vet a call and figure that out. But has anyone else dealt with terrible allergies? I've had him get cortisone shots before and take allergy meds that the vet gave… Continue

There's this website called stumbleupon.com, and what you do is set up an account, and then select things you like! Then you have a new toolbar on your web browser, and you click "Stumble!" and the web browser will generate a website for you that you like.. It's good if you get bored often and need something to do on the internet... Anyways, Stumbleupon.com sent me to this:

SO CUTE. It must know me… Continue

But I have some interesting updates!

1) I moved out into an apartment with my boyfriend, Donny. Me, him and Winston are loving it in our new apartment neighborhood, where there seems to be a dog in almost every apartment! We have a French Bulldog neighbor named Chester, and there's plenty more dogs everywhere.

2) Winston went to the vet a month ago, and he weighed in at 37 pounds! I know! How did I let that happen?! Either way, Winston is getting some longer walks and I'm… Continue

if you didn't already know, winston has been living at my now ex-boyfriends house for the past year. since my ex and i recently broke up, i kind of just... moved winston back in with me. i didn't really ask my parents, it just kind of happened. i'm very happy about it :):) now i just have to make sure he is a perfect little boy so my parents wont be angry. YAYAY

Winston's 2nd birthday was yesterday. It wasn't too eventful, his presents are still in the mail. I'll put pictures up later though. :)

I just got Winston a dog pool and some Blue Buffalo adult weight control food. I hope he likes it and its better than the Purina stuff he's on!

So while I was asleep today, Winston got into the trash in the kitchen... In the trash was lots of Easter leftovers including ham. There was also 1 small chocolate candy, a burnt cinnamon raisin bagel, and a whole rotten onion. I have no idea what he did eat or if he really ate anything at all... I found part of the bagel in the hallway but it was so burnt I don't think he really even tried to eat it... I'm just really worried about the onion. I tried to make Winston throw up with 1tsp of… Continue

Winston's birthday is coming up...

...And I'm excited to start planning his second birthday party/cookout but I don't know where to have it this year. Last year, we had it at my boyfriend's grandmas which is was cool, but one of her friends came and brought her grandson who was TERRIFIED of dogs. Yeah, not so good. I wish I had a fenced in backyard so I could just throw it at my house. Blah. Planning a party is hard. Especially when it's for a dog.

I'm also making a list of what to get him. I wrote down a few… Continue

Wow, your dog is Will Ferrell!

Keeping a straight face around Winston is a cheek muscle-wrenching nightmare. Try as you may, but giggling is inevitable because Winston is comedian Will Ferrell!

For a while Winston was just funny on Saturday nights, but that's all changed now that he's taken his act on the road. Whether he's being silly in… Continue

Winston's the best dog ever!... When it comes to the vet.

So Winston's has this hot spot for a few months now... He was first on antihistamines for a while and they would stop the itching temporarily but he was still itching once we ran out. I took him back to the vet today and told them the dealio and they gave him some more antihistamines and also gave him a shot.. And he was such a good boy during the shot. I was so proud! He didn't even flinch.. I knew he hated it but he didn't bark, bite, try to get away, anything! The vet was surprised, he said… Continue

So I posted this in an already-started forum, but it was from 2007 so I figured I would just post it as a personal blog and see if any of you people could help me out...

Has anyone ever tried the Beneful healthy weight food? Since Winston isn't living with me it's hard for me to control what he eats and doesn't eat... Hence why my boyfriends mom (Winston's been staying with my boyfriend and his parents for now) has been feeding Winston a FULL HOT DOG every morning for breakfast...… Continue

Vote for Winston as MVP for Bissell!

SO subscribing to this magazine.

I found some magazine called Modern Dog... SOO subscribing to it. Haha.
However I saw this article online from the magazine. Makes me wonder how people are so sick. It makes me so mad.

So since Winston lives at my boyfriends house, I'm always over there. Since I'm always there, I always see lots of people taking their dogs on walks. His neighborhood is a pretty highly dog-populated neighborhood (unlike mine, where we can't have ANY fences except for an electrical fence, because of stupid "rules" or whatever... But anyways. Since Winston's moved in, I've seen a lot of corgis in the neighborhood! There's even a new puppy. There's a Cardigan named Oreo, a Pembroke named Tank,… Continue

Well, today is Winston's birthday, and the little guy is 1. Of course, he doesn't realize it's his birthday but everyone else does. He has a birthday party planned for the 16th... We're having a cookout and my friends are inviting their dogs over.. I'm pretty excited. :D I still have a lot of presents to get him! 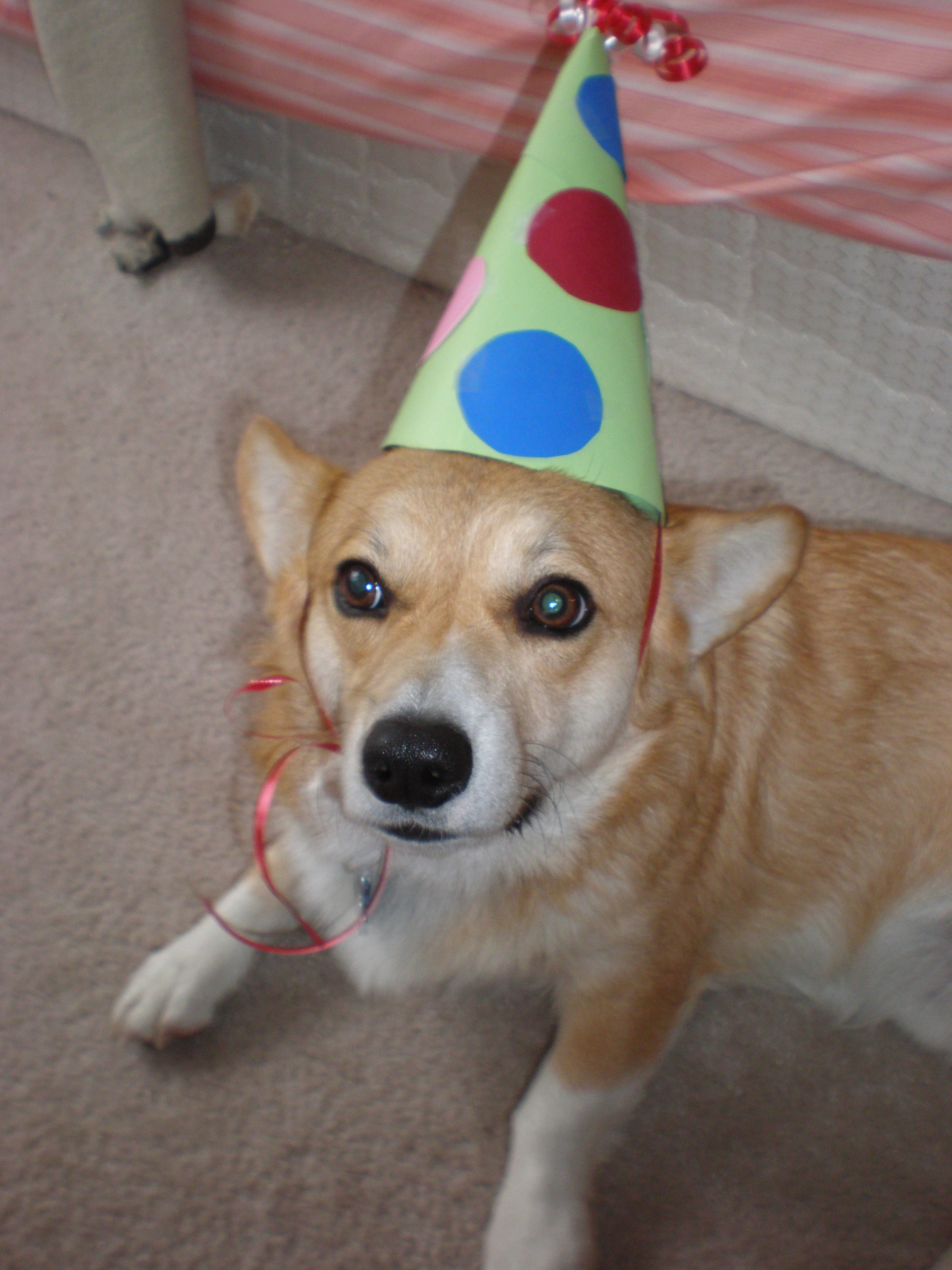 Winston's first night at the Vet

There comes a time in every dogs life where they must be neutered or spayed... And yesterday was that time for poor little Win! After a sad goodbye, I dropped him off at the vet clinic before heading to work (and after a nice snowstorm which added quite a bit of time to our trip). He looked terrified but I knew my little boy would make it. I can't tell you how quiet it was in the apartment last night... Even Venus (my roommate's dog) was depressed. This morning, I woke up at 10 till 9:00 AM and… Continue