How does your corgi react to a new baby in the family?

I'm currently going through my pregnancy and I'm just wondering how does a corgi react to a tiny new comer A.K.A the baby in the family? I'm sure some people here have gone through this moment and a few sharing will be very useful for me :)

Is there anything that I should pay attention at? I will try to make sure that she won't get too jealous.. as my corgi used to be the baby in the family ^^ spoiled.. but so far she never reacts aggressive towards my nephew or niece when they come over.. just the fact that she's quite big (at least for 4-5 years old kids) and she likes to welcome them very well. But I don't think Molly has ever met a baby before..

Permalink Reply by Lucy &amp; Ricky (Wendy/Jack ) on February 18, 2010 at 10:44pm
I worried how my 2 corgis would respond to a first 2-legged baby. My friends worried what I would do if the corgis didn't like the baby. I glibly said that I'd have to give away the baby. I posted how we dealt with 2 corgis and a new baby. I need to add that I am not an expert. I've had Corgis for 40+ yrs. and am responding only from personal experience. After Lindsay, we had 2 more babies and a few more Corgis who got along famously. Even my 3 dgts, all in their 20's, have been best friends w/o rivalry. While I'm not an expert in dogs, or people, I am a trained psychotherapist with an MSW in clinical work. I'm retired, but I have used my training and experience in raising sound & happy kids and also sound & happy dogs.

Permalink Reply by Ivy & Bryson on February 19, 2010 at 1:33am
Hi Angela, congrats! You guys have a LOT of fun ahead of you with Molly and a new baby around the house! We just welcomed our first baby, Eva, into our lives about 7 months ago. We too were worried about how Bryson would be with a new baby, and a friend recommended this book- And Baby Makes Four.

The great thing about this book is that it not only talks about some of the things a lot of folks have mentioned here already, e.g. bringing baby's clothes home for dog to get used to the scent, protecting the baby at first then gradually building the baby up as the pack leader, etc, it also talks about some stuff you can (and should) do NOW while you're still pregnant, e.g. get your dog under a "status reduction program" (no more babying your corgi! sad, I know, but oh so important), reinforcing "leave it", practicing really good leashed walk (you don't want to be lugging around a crying baby and a dog that only wants to go in the opposite direction). It also talks about slightly withdrawing attention in the last few weeks before your baby arrives, and then make an effort to give him more attention when the baby's home, so he doesn't associate the baby's arrival with a deprivation of love and attention from you.

We tried to follow the above advice as much as it made sense to us, and have generally good results (a caveat for us is that Bryson has Addison's Disease where he has problem handling stress, and he's sort of an atypical corgi that he's totally mellow, is not bossy, doesn't herd anything, and is generally leary towards small people who always seems to want to chase him).

At the beginning, the most challenging thing is the schedule- or the lack of it. For Bryson who's used to being walked and fed at certain times every day, he was really confused for a while... Like when we wake up at 3 a.m. to feed the baby, he would wake up with all of us, thinking it's morning, he'll go to his food bowl and wait, only to be completely baffled when 30 min. later we turn off the light and all go back to sleep. He would then whine until one of us get up to feed him... But he gradually got used to it and eventually didn't even get out of bed when we do. One of our friends who recently had a baby sent their dog to stay with a dog sitter for the first few days when they were settling in, and they said that it was nice not having to worry about taking the dog out when they were still trying to figure out what's going on with a new baby. We didn't do that, but we packed a "survival kit" for Bryson (with his food enough for a few days, medicines and some toys), which we handed off to a neighbor who watched him for us while we were in the hospital.

It took Bryson maybe a month to get used to having her around, but since then he's totally mellow with her, and really seems to have accepted her as part of the pack (this was when Eva was almost 3 months): 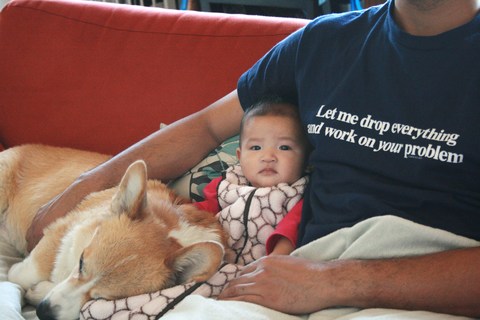 Eva on the other hand LOVES Bryson! Ever since she started noticing him, she would follow him around the room (with her eyes, I mean), squeal when he comes close, loves giving him treats (our way of training Bryson that she's his "higher-up"), and always want to grab his jowl and pull his whiskers (gotta be careful with those attempts). Here are a couple more recent pix and a video of them playing: 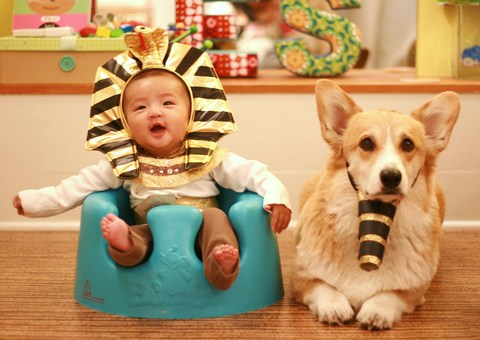 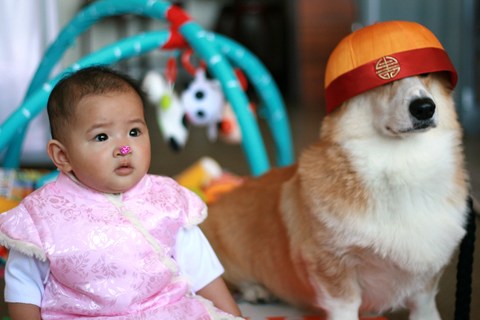 Wow, sorry for the long response, I got carried away! You can tell it's so much joy having a corgi and a baby in our lives :) You can check out our blog if you want to see more of these 2 in action. Can't wait to see pictures of Molly and your new baby :) Congrats again!

Permalink Reply by Beth on February 19, 2010 at 7:06am
Love, love, LOVE the pictures and the stories! Thank you for sharing! And it's so nice to hear of people who don't dump the dog the minute the baby comes. I know there are exceptions (baby has allergies, baby has extreme special needs and parents don't have one extra second left in the day) but it infuriates me when people get a dog and treat it like "the baby" until the real baby comes along, and then the dog is either totally ignored or sent off to the pound.

So I really appreciate hearing about people who take the steps to make sure everyone stays happy, and then have a child who has the joy of growing up with a kid-friendly dog. :-)

Permalink Reply by Jane Christensen on February 19, 2010 at 8:39am
How beautiful! Looks like you have a wonderful family!

Permalink Reply by Angela Wiramihardja on February 19, 2010 at 10:36am
Thanks for your response ^^ your daughter and corgi are both beautiful ^^ he looks so cute with that chinese hat ^^

Permalink Reply by Lucy &amp; Ricky (Wendy/Jack ) on February 19, 2010 at 4:37pm
@ Ivy and Bronson- Fabulous photos of Eva and Bronson. Your family looks like so much fun!

Permalink Reply by Angela Wiramihardja on February 19, 2010 at 10:35am
Oh wow.. thanks everyone for your responds and suggestions. Also for the beautiful photos ^^ I love them all. I will follow your suggestions and see how my Molly reacts :) she's been around my nephew who's only 2 but not very often.. and it was visible that she was a bit guarded (not aggressive) because she's not used to see someone so small. Luckily so far Molly looks like that she has a very gentle nature (not snappy when bothered - even when she eats or sleeps). I still got a lot of time to practice now ^^

Permalink Reply by Ivy & Bryson on February 19, 2010 at 12:26pm
Sounds like Molly's already got some experience w/ kids, which is great :) Bryson has never interacted with kids (except for the random ones we ran into on the street), and he did fine, so I'm sure with some preparation, Molly will be great with your new baby. Forgot to mention we took good, long walks (the 4 of us) almost every day as soon as I was physically able to after birth. I think that helped reinforce us as a pack. Hope you have a smooth rest of your pregnancy! Keep us posted!

Permalink Reply by Laura & Lola on February 19, 2010 at 7:27pm
Lola has been pretty good with our baby, Owen. He's now 7 1/2 months old & mobile, so she gets irritated with him crawling after her all day! He just LOVES her though!! I'm hoping once he can pet her 'nicely' she will warm up to him. She's always been a little skittish though. She has been following him around a bit more now that he can eat snacks ;) Such a Corgi!!! 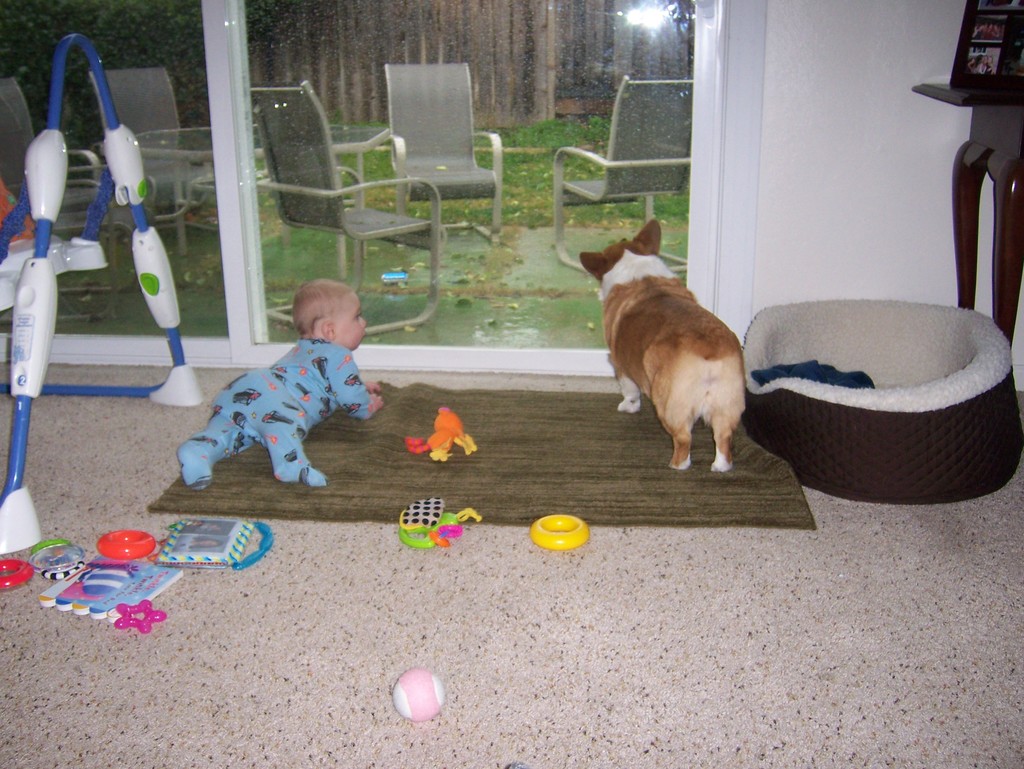 Permalink Reply by Avyon on February 20, 2010 at 2:04pm
We don't have a baby ourselves but CONGRATZ! :) Its going to be such a wonderful time for you!

Roxi grew up with kids around her so I never worried about her. She went to the afterschool program with dad and herded the little kids all afternoon till they were picked up lol. In turn the kids learned how to be nice to animals.

Charlie had his real test when we went to a bbq and my boss brought her granddaughter who was still a baby at the time. It was getting late so they laid the baby on the floor and the dogs still played and sniffed a little but after realizing it was a "pup" they left the baby completely alone. Actually keeping a distance around it.

Its been amazing but whenever we've been around kids or babies they both have been very gentle and nice. Its like they know its a human pup.