Dog Shows are a ripoff!!

Alright. It must be a conspiracy. So, Moses, Camber, and I are watching the Dog Show on Animal Planet tonight and I'm quite upset. Now, all dogs are wonderful. They are all special. But. why hasn't a corgi won one of these dog shows? Now, if a corgi has won, well, that's great. Please let me know. But, we watch these dog shows almost every time they come on and corgi's never even place.

Know what won in the category the corgi was in (not a breed category)??

So, my person thought it'd be a good idea for me to make friends with other corgi's and their persons, so here I am! My name is Felony, I was born in September 2008 and I'm nuts for cheese. I was the third corgi pup born in a litter of six. My persons-to-be came most everyday to visit us soon after we were born, so we all got to know them pretty early. I must've made a good impression because they knew right away they wanted me! I think it was because I was pretty independent… Continue

I have been wanting to get a corgi purse and my search was going nowhere fast. Then I found this website based in England:
Pets Are Best

And I found just what I was looking for. I think it is so cute! 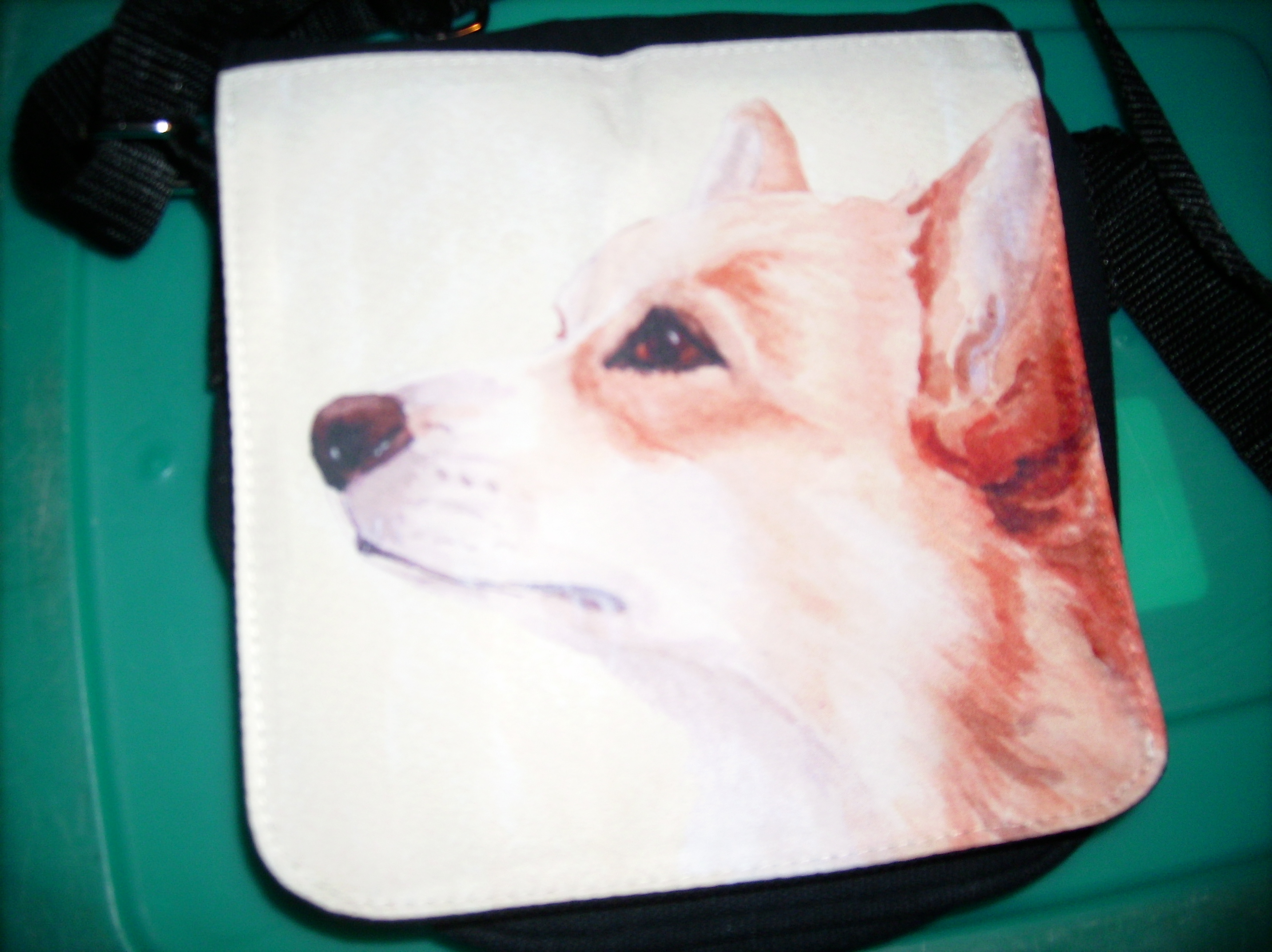 As a bonus they included this greeting card featuring a pair of fluffies: 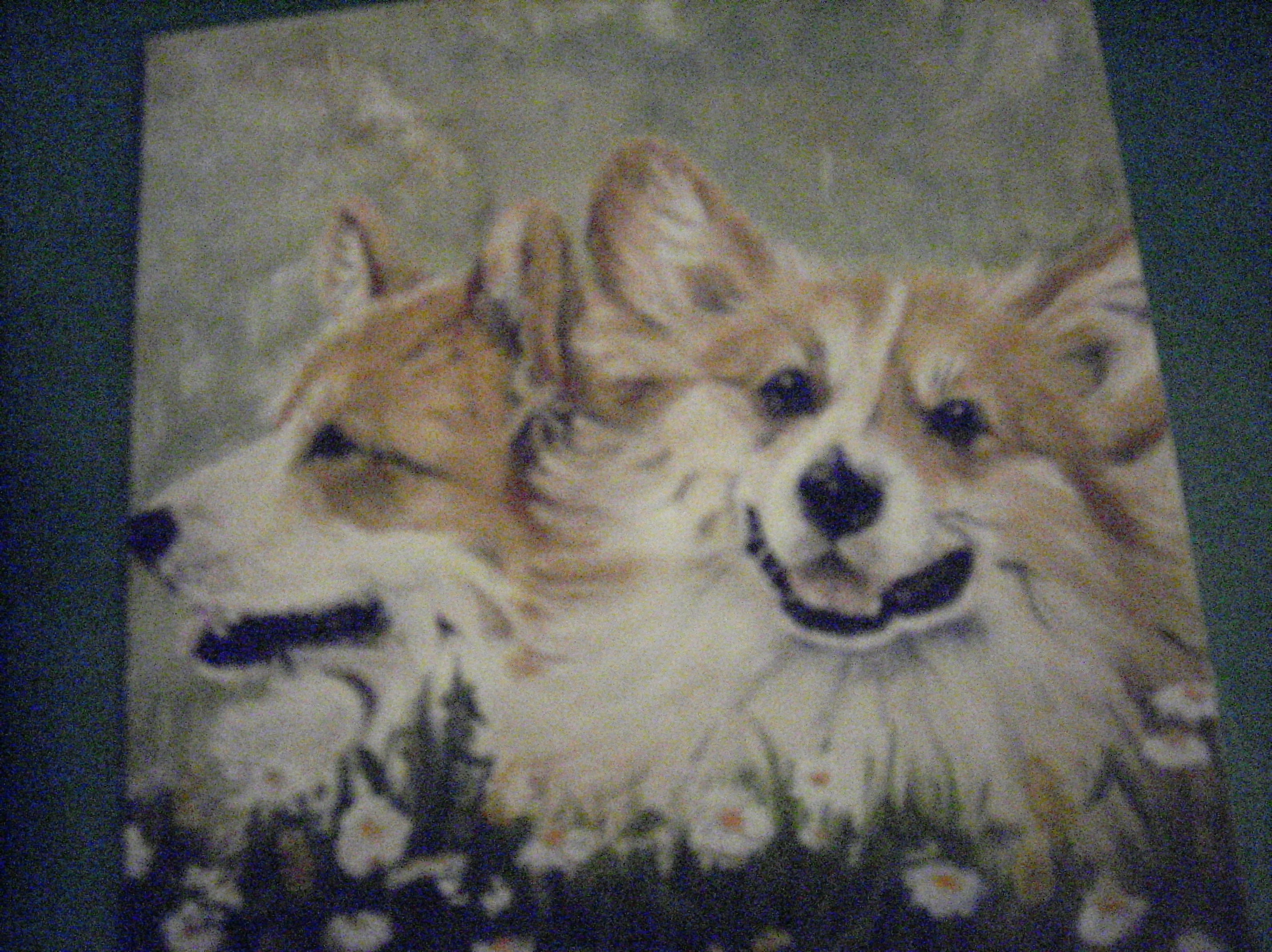 I had an awful bad day. My job gets to me sometimes and the next thing I know I'm crying because I'm so stressed out and freaking out over deadlines and such. I don't have a gym close enough to get this out of me--hence tears.

Then I get way laid by two trains putting me even further behind from getting home. I just wanted to go home and take a bath and eat some food--maybe a beer too.

I get home and Freya was eating in her kennel, my boyfriend fed the dogs, so I at least… Continue

Well the Babies are getting big now and they are so cute! I am going to get some more pictures of them this weekend and post them for everyone to see. I am getting really attached to the runt, and I dont want to get ridd of him, but the husband is not going to let me keep him! No if's and's or but's about it! They are all barking, growling and walking around quite well. They seem advanced for their age! They are already begining to nibble on softened puppy food and are loving it. They are so… Continue

I finally did get my 2009 calender. I just wanted to say thanks for the responses. I love this club and will post some pictures soon.

We picked Morna up at the airport in Charleston yesterday afternoon and got home about 7pm. Morna slept in her crate in the car...no car sickness, yay!!. We took her out of the crate and let her roam around to explore her new home some, and then set up her playpen area. We put her in it an gave her food and water, her bed and her toy that was sent with her along with a new one.

She took one sip of water, sniffed her food, grabbed her toy and started playing with it. Because I put her… Continue

I Need Your Help!

Last week I blogged regarding a repeal of Basil's Law...A law put in place to ban trapping in the right-of-way after the tragic death of my best friend Basil. The bill to repeal the ban will be discussed for the first time this year by the Nebraska Legislature on Friday, January 30. Please check out the original blog post and read the reponses at the end from Theresa and myself. If you are from Nebraska please communicate with your senator. If you are not from Nebraska you can still help by… Continue 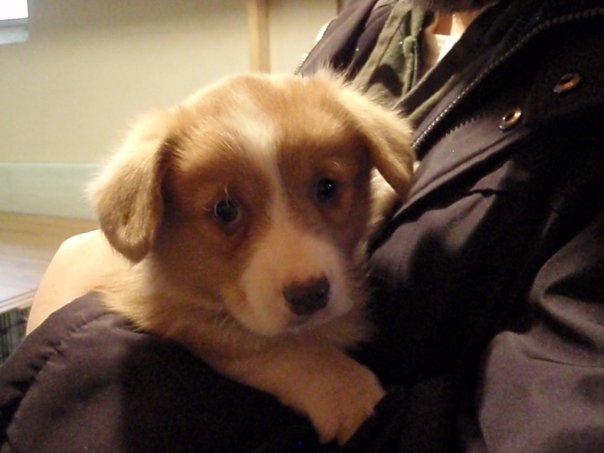 So tomorrow we're finally going to pick up Optimus and bring him home with us. I'm beyond excited about it, the last 9 weeks have been hell knowing that we have an adorable corgi puppy waiting for us to settle into our new apartment. So far I've read 2 books:…
Continue

We heve just come back from a few days away in our new motorhome which was really relaxing and good fun even with our cold weather!! My problem is Wilf, whilst he is happy enough when we are parked up but he is not happy traveling. He seems very nervous and cant seem to find a place to lie and stay, he is continually on the move (usually around by my husbands feet whilst he is trying to drive!!). I was wondering if anyone had had any similar experience and could offer any advice

When is it a good time to get my Corgi tested for this disease? She is almost two years old and i saw that Corgis are highly known for having this problem. Does anyone know when i should get her tested and if so, are there some who test it here in orlando?

Today is Pandora's fifth birthday! It feels like only yesterday we drove to Kansas to pick her up and now she is five.

We will be celebrating tonight with canned dog food, puppy icecream, and a new toy. 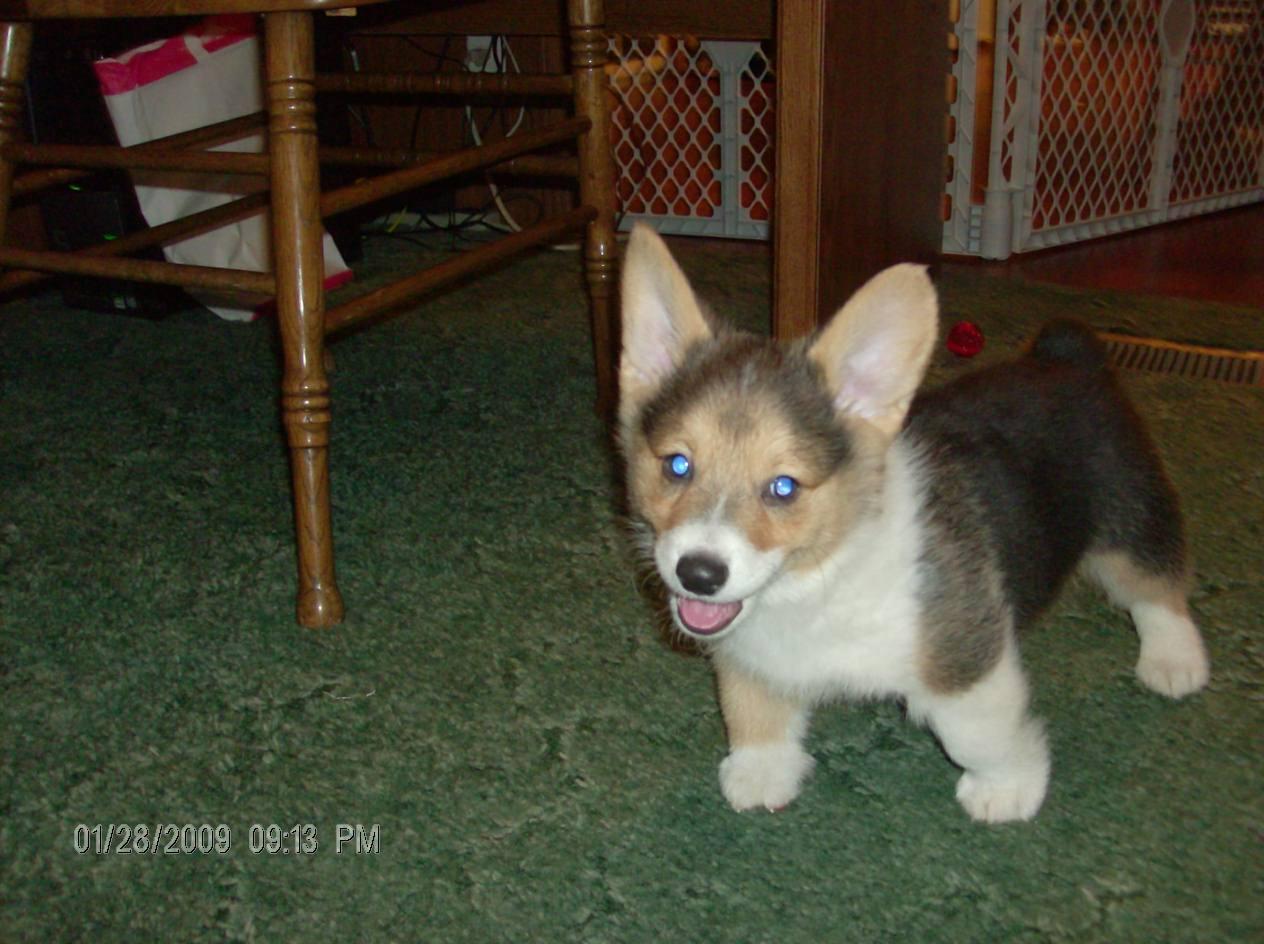 So, after 2 long and torturous delays Anselm should be coming saturday sometime if the weather permits. LETS ALL HOPE FOR MY SAKE OR I'M GOING TO GO INSANE! Anyways, just wanted to show Anselm's Cute Corgi trademark smile to all of you. My breeder sent me this pick and I thought it was just so Adorable I couldn't stand it alone. So here you go… Continue

i took her out for a second walk today, around 6pm.. so it was quite cool.
she actually completed a route! yay! haha
also i started noticing one of her ears are starting to creep upwards. lol quite
funny looking actually.
hopefully both ears will come up soon. ^_^ 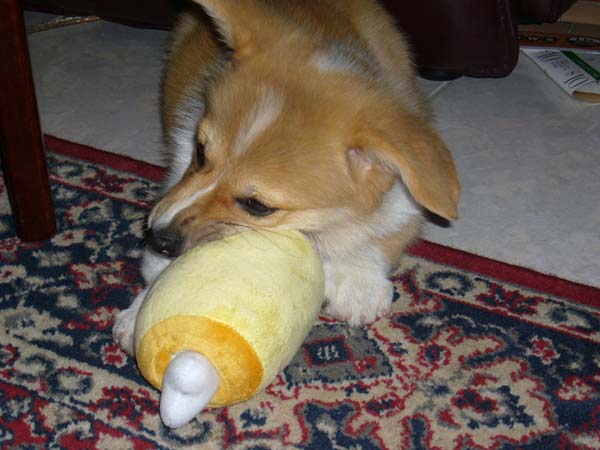 (hachi and her new toy - which i won playing skil tester.. hehe i'm so… Continue

It has been a very long time since I last posted. I have missed you all!

Things have been going well with us and Camber. She has been loving the snow lately, but definitely has a time limit in the white stuff. Moses and I have been considering training Cam for agility. There are kits that you can buy and set up in the backyard. I think she'd really like it. Time to focus all that FRAP-ping, right?

Other than that, all has been well. Looking into… Continue

Puppy decided on his own ... our apartment is a bathroom?!

We've only had our Zwei for about a week now and he decided to use our livingroom as a bathroom. Big NONO!

This is driving us nuts, so now he occupies the porch (bigger than the area we gave him before) with a covered area. We're afraid to let him inside into the living room or else he pees AND poos, and when we try to take him for a walk he doesn't decide on doing either.

Still the queen of poop smushing!! 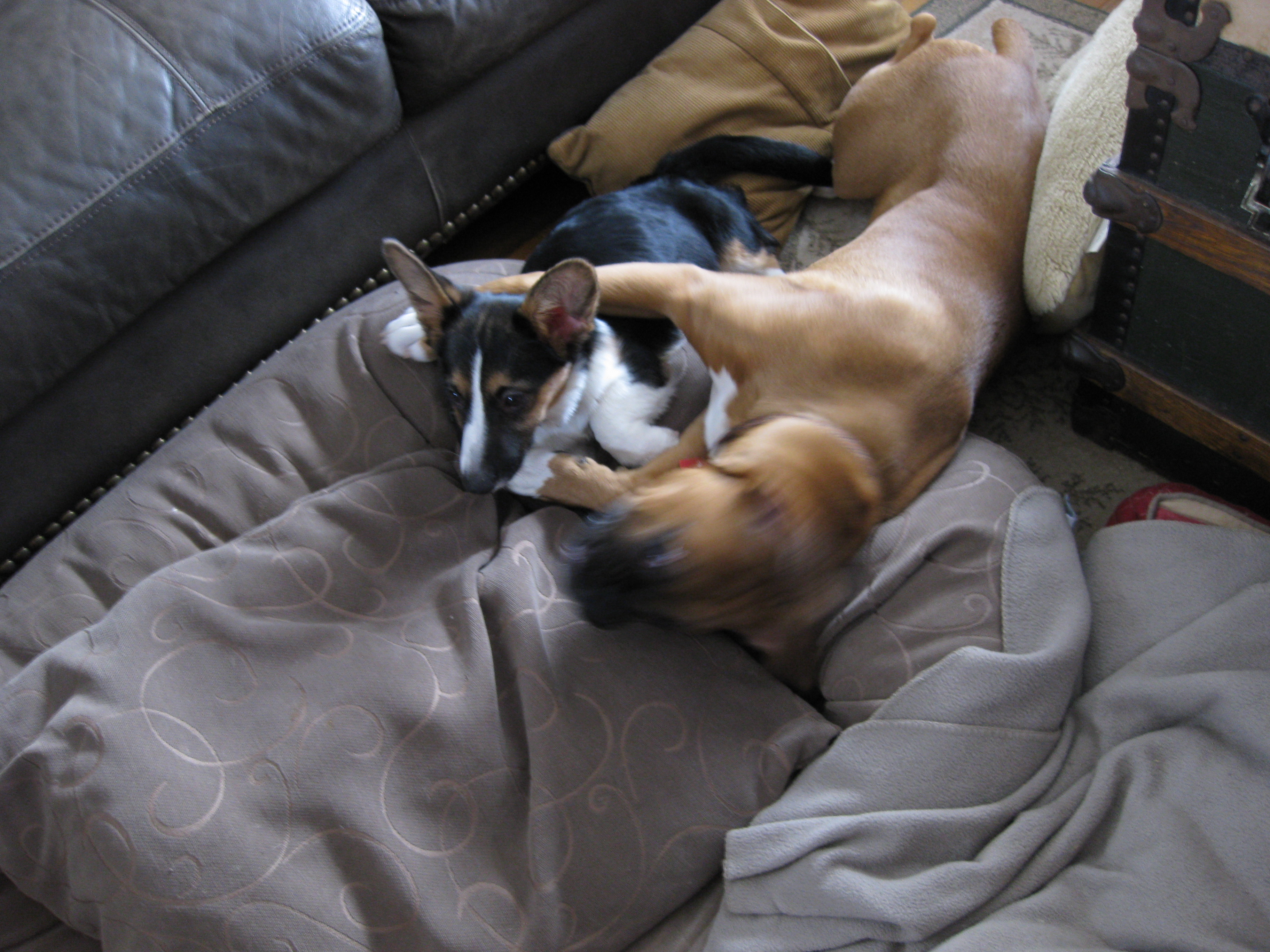 Josie continues to make a HUGE mess of her kennel area when we are at work - I guess it is just a matter of time before she becomes bored with this little activity....my boxer has even picked up the nasty habit (they are in runs next to eachother in my basement during the day when we are at work). Tomorrow is the big day at Purdue with Maci the boxer - she will be undergoing a full cardiac workup to determine why she passed out. Unfortunately with my… Continue

My Cardigan is 4 1/2 months old and still only has one descended testicle. The vet said he would rather not neuter him until the other one drops because if he were to neuter him now, he would have to go into the abdomen and locate the other testicle which ends up being a more complicated surgery and more discomfort for the dog. He said if it hasn’t dropped by 1 year of age, he will have to go in and find it. Has anyone else encountered this problem? I think he called is chryptorchidism and he… Continue

Thanks for the warm welcome everybody!

Morna is scheduled to arrive in Charleston, SC around 3PM tomorrow! We will have company driving to Charleston (not to mention a more roomy vehicle than ours) because my 4 year old grandson loves Chuck E Cheese, and there are none in Myrtle Beach. So... while we go to the airport there to pick Morna up in the cargo area, JTF and his mom will be having fun at the big mouse house.

We will go back to get them once we've talked to and gotten Morna out of her crate, given her a little… Continue