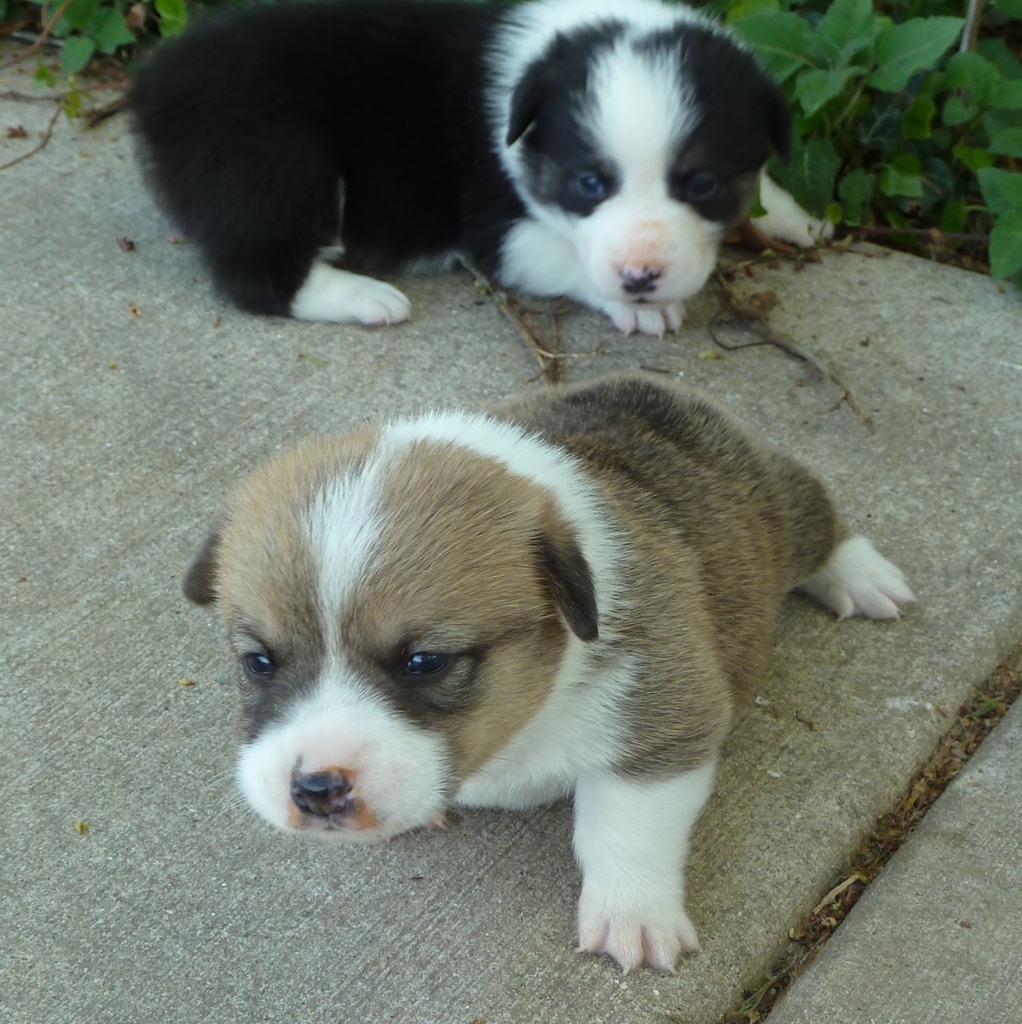 Here is a new picture of the babies--Taffy at top and Huey at the bottom. This was the first day the breeder had taken them outside. They had just had their first exposure to solid food. Much of it got on their noses and feet. In about five weeks we get to bring them home. We are going to see them again next Thursday. We can hardly wait!

I think I can finish…

Bailie can already do a few tricks and has already been taught come on a small scale but lately we've been having trouble with it. Any suggestions?

A Most Unusual Encounter

Right, well, I've been going on and on about socializing Ace. I've encountered pretty much every size, shape and gender of human being with him. I thought I had covered all the bases... until today.

Enter CDL - Crazy Dog Lady. She was peculiarly dressed this fine Friday evening - I could see her... ahem... undies from a mile away, saying hello over the waistline of her pants. You'd expect this sort of outfit from the younger generation, maybe, but this lady was easily pushing…

This is actually a two part question. First off how long did it take your corgi to get used to a collar/harness? And second how did you start leash training. Our corgi is starting to run almost too fast to catch so I know we'll have to sta4t using a leash now.

Carrie and I brought Orion home a month ago and it's been amazing! He's such an incredible pup with the best temperament. He's definitely growing in to his personality; playful, strong willed, smart, curious and we love it. 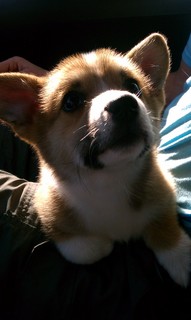 Yesterday we had some wonderful entertainment in our living room. It was the first time that Kadi and Brodie started FRAPping at the same time in the house. They have done it frequently outside, but so far he has been very subdued in the house. I think he's so happy now to have his Elizabethan collar off and he's finally feeling like he is really going to get to stay here always, that he is relaxing now and being his little corgi self. I lost count of how many times he pounced on Kadi, then…

Getting my girl soon!

My husband and I are taking a three hour trip out to Yakima, WA on Saturday to pick up our little tri-colored Pembroke girl! Couldn't be any more excited. :) Just hoping that I have everything in place for her. We already have a crate, bowls, puppy pads, a bed, toys, and a gate! Very excited to finally meet her and become a Corgi owner! :D

I would really appreciate if you could all take a minute and vote for my corgi Missy in this photo contest. We get a free photography session if her picture wins! Thanks so much!

Thank you ALL for the advise!
He did dental cleaning and tooth extration done yesterday. 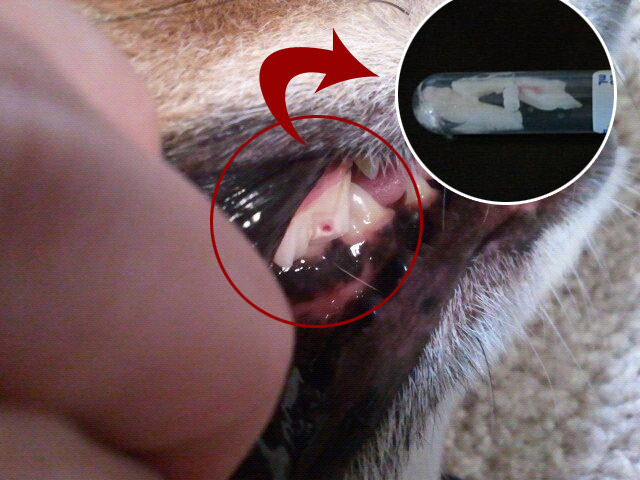 (i kept his tooth for souvenir.)

He's on three medication now and he seems doing okay so far.
I haven't look at the spot where he pulled out the tooth yet.
but i know he'll be a good boy!…

Loo has been babying her back and back legs for a few days now.  Not sure if she twisted it or fell when we weren't home.  No running, no jumping, no happy corgi!  Took her to the vet to get pain meds and anti-inflammatory pills.  That's the best part of the vet visit..

She has had a 'floater' in her left eye for some time now.  Not visible when we got her-we checked our baby out!  It's alien to us, but it is growing.  She will need to be seen by a doggy eye doctor and prepped for…

It's been a few weeks now that I have worked on Ace's people skills. Every day, I made it a point that at least one stranger would come up to him. He's done terrific progress in some parts, and is going at a snail's pace in others. What I have discerned from this experiment so far:

- Ace loves the ladies. Of all shapes, sizes, ages and species. If a girl comes up to him, he will go sniff her with just momentary hesitation. What a ladies' man...

So I've been looking around for breeders again... Just in case someone has something that I want. I know I shouldn't be impatient when it comes to making a big decision like getting a dog, but I admit... it's been more than 15 years that I've been waiting! It's hard to stay patient and not make rash decisions. And most breeders that I've contacted seem to be not good about replying to a 2nd email... I'll usually get one reply, and then nothing after that. It's a bit…

I'm just going to post a short blog to say how thankful I am that God knows what He's doing and is the one in charge. I have no doubt now that Brodie showed up at our farm when he did for a reason. That reason was that God knew we needed him as much as he needed us.

Over the past two weeks, my mother (who has been living with us since my dad passed away last August) suddenly took a turn for the worse, with the onset of dementia, followed by a basically comatose state. Had Brodie not…

Dewey was in the newspaper!

A friend sent this to me and it's also on I Can Has a Hot Dog. Very cool.

Always try to match your dog to your cabinetry.

Sometimes when Bailie sit her left front leg shakes just a little. Has anyone else seen this before?

Since mastering cross-paws with just an auditory cue, Ace has been working with me while I try to develop his play drive. If you remember, when he first came to live with me the initial worry I had was that he was completely disinterested and unmoved by toys of all shapes, sizes and squeaks. There's a Kong in absolutely immaculate shape after I stuffed it with everything short of filet mignon. Our tennis balls have their fuzz intact, and we have a rope toy with knots still…

Missing Stinky Wink has become a part of life now. I still shed a few tears now and then...especially when I am reminded of something he used to do, or someting we did together. This morning I remembered a game we used to play at our former house. He was about 4 or 5 then. I called the game "Noise in the Bushes." We had a row of boxwoods along the garage, with ivy covering the ground out to the sidewalk. I would sit in a lawn chair on the patio and throw a small rock into the bushes. …

Eating corgi can you explain this?

this is a video of my corgi eating a boneish type thing?