Dad Goldie and I were playing..like usual.Our game you ask?
Its Called HELP. Dad would pretend to attack me and goldie would protect me =] Goldie never bites but this time dad grabbed me and flipped me on the couch. Goldie was furious so she BIT HIM!!! It was a surprise cause SHE NEVA DOES THAT! poor Daddy=[ But hey she knew dad is dad and couldn't resist a bite. so what…
Continue

When creating my profile I chose that I had "no corgi". Unfortunately this is still the case. However, I was inspired to write lyrics about having no corgi based upon Led Zeppelin's "No Quarter". So, here it is...

Dexter turned one! :D I am so proud of him. He is really a good dog. We worked out our issues with walking on a leash. He does beautifully now. He is still a little wary of other dogs after a pitbull off a leash ran up on him and caused him to rage, but he is getting better. We are working at introducing him to other dogs slowly, letting him get his "bark" out, and showing him that "yes, hunny, when mommy is here everything is okay." He is progressing.

It's hard to believe, but my sparkly boy is three years old today. Where does the time go?

So a very Happy Birthday to Jack, the dog who everyone loves, the one who thinks there are no strangers in the world, just friends he hasn't met yet. He does everything with grand enthusiasm, and I positively adore him. 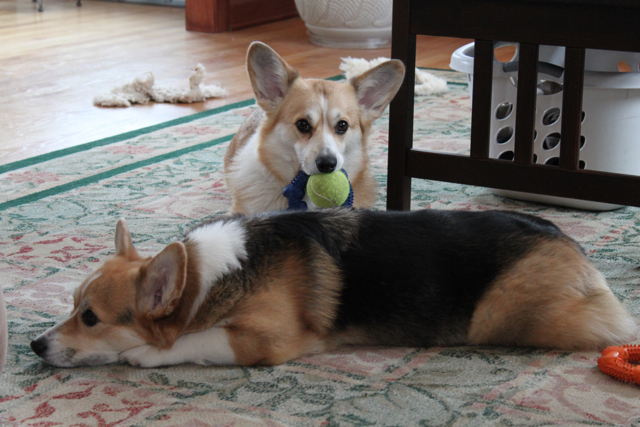 (He's the one with two toys in his mouth, because one just won't…

Hey all I started a new blog!

If your into sheep herding or agility Ill be talking about what we are going threw as we train from the beginning!

So my last blog post was all about my corgi Dax and how awfully itchy he had been the last few months, from what i expect to be airnorne allergies. He would itch to the point of injuring himself and even had to be put on antibiotics at one point. He has been on and off prednisone for the last year-and-a-half, and has been on more high quality foods than I can count. Well, as a last resort, I decided to switch him over to dehydrated raw food, that was specifically for "allergy dogs". He loved it… Continue

Puppy sitting and the frustration....

So, I really need to vent and I'm sure I need to just have a good cry and get it over with. I have more patience with animals than I do with anything else in the world. I went to puppy sit my mom's new German shepherd puppy yesterday and he was a TERROR! It was kind of disappointing because I was looking forward to it and it turned out to be a bad day. Copper and Pooh were seriously the best puppies EVER! My mom's new puppy would not stop peeing and pooping in the house. I would take him… Continue

Why I've been so busy lately =) 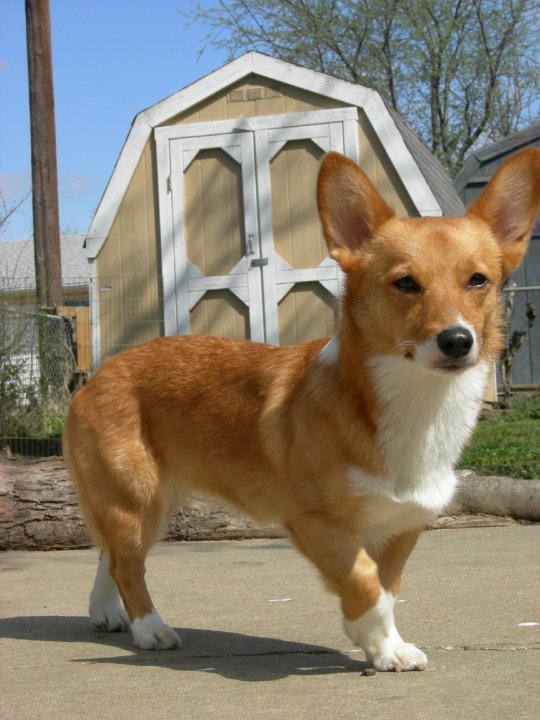 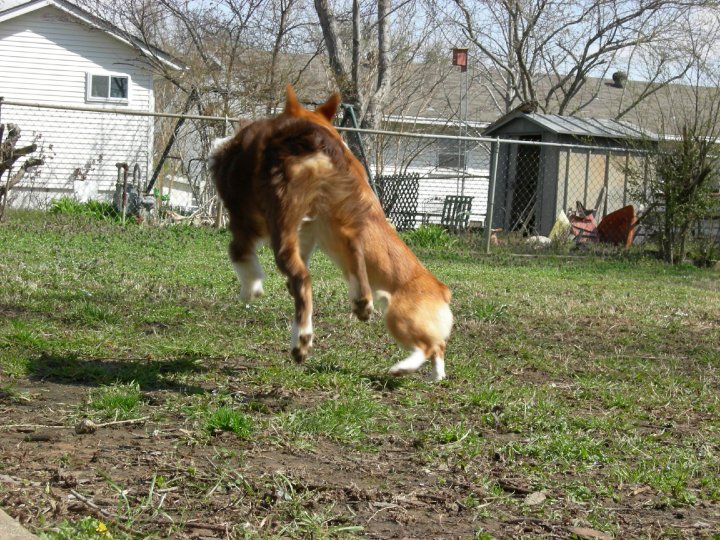 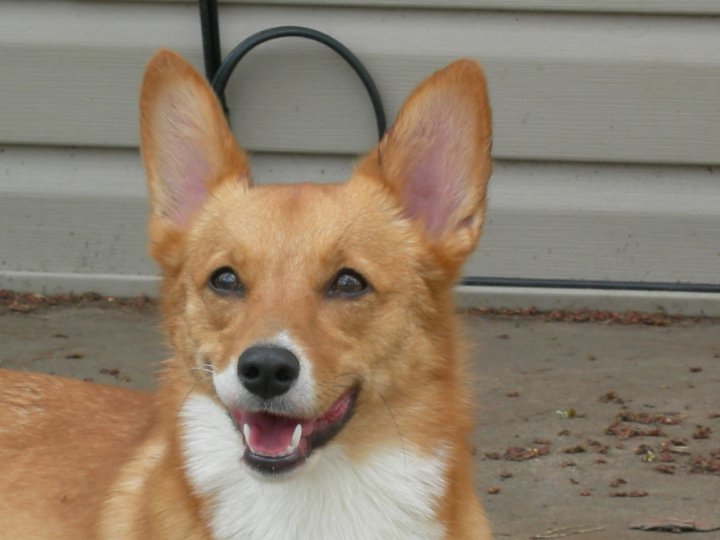 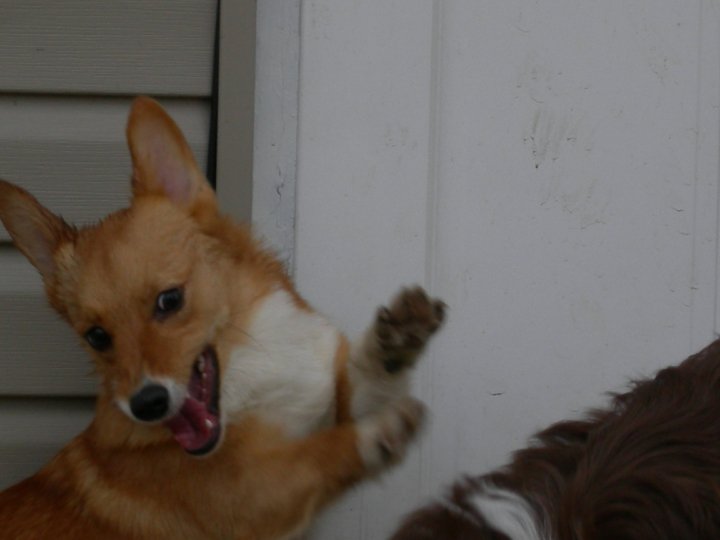 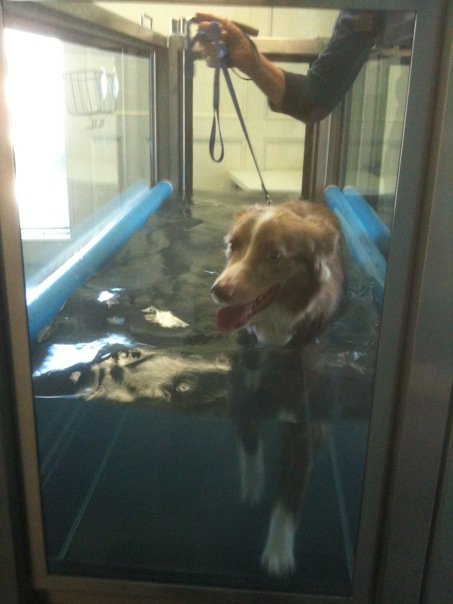 My Sally is 3 and we rescued her at the end of December. She is scheduled to be spayed on May 10th. I am worried because she had a bad reaction when she had surgery with her 1st pregnancy (she was bred at a year old). She had 10 puppies and 1 died, but she tore her uterine wall and was under a long time. I plan on having the test done to be sure she can handle being put under,…

Two Missing Corgis in Fountain Inn, SC -- can you help?

I was awakened at 4am last night to a corgi in distress. It began with barking, to which I responded "No. Go to sleep. Shut up." I grabbed my phone of my night stand and shined it on the bedroom door, where I expected to find Jasper begging to get out. Surprisingly, no corgi at the door. I shrugged it off and started to go back to sleep. Then the whining started, which is really strange because I've heard Jasper whine a total of 3 times in his life, most of which were whilst in an uncomfortable… Continue

"A Gathering of Corgis"

Hey everyone I wanted to let you know about a new book that a friend of mine put together. Her name is Ginnie Mickelson and she completed this photo essay for a Photo Journalism class. The photos were taken by Ginnie and another photographer identified in the credits at a dog park in the San Jose, CA area where my friend lives. She is donating all profits from the bood to Corgi Aid. The preview pictures don't do the real images justice. I recently got a copy and the pictures are absolutely…

So bought ace some more puppy chow.. he loves this new stuff alot.. its called 'Chicken soup for the puppy lovers soul' lol long title but i heard good remarks on how dogs seem to love it.. Soooo I b…

So bought ace some more puppy chow.. he loves this new stuff alot.. its called 'Chicken soup for the puppy lovers soul' lol long title but i heard good remarks on how dogs seem to love it.. Soooo I bought it and just opened up the bag... Ace immediatly attacked the floor hoovering up the kibble that missed the dog food bucket... I think he likes it... mixed it with his old food just to get him used to it but im not sure i really need to do that LOL... I would rather make him food myself but…

Our corgi Jeter was a shedder.
When we hugged or just petted him before a lot of fur comes off and we were literally covered with his fur.
Nothing was safe from his hairballs in our house and we used the lint rollers like crazy.
But those days are gone. Jeter does not shed any more :-)
Along with "no shedding", his poop is not stinky. His coat looks really good.
We are not sure what exactly makes our little shedding machine to stop shedding but just assume that new food… Continue

So I am picking up Bentley today from Hillsborough County Animal Control. I am so excited that I am taking half the day of from work to pick him up earlier because I would probably be antsy all day waiting. I will post later the laundry lists of things the animal control says that is wrong with him. I cant wait to get him on the road to recovery. I just cant believe someone would let him get to the condition he is in, although he was a stray why didnt his owners look for him.......

It's shedding time once again - just in case you needed to be reminded.LOL. I swear I could sit all day with every possible grooming tool I own and still not be ahead. It has been a very windy last few days here in Michigan, and every time the wind blows, the fur flies. Poor Minnie reminds me of Pig Pen from Charlie Brown - but instead of being surrounded by a cloud of filth, it's fur.

I try to make the process seem more fruitful, by reminding myself of all the bird nests Minnie will… Continue

I’m changing Scouts name to Houdini last night at around 12:30AM I hear the puppy begin to whine something he hasn’t done in the 2 weeks we’ve had him. Moments later I hear a thud up against the bed room door,
disoriented it scared me a little then I realized what it was. Scout had somehow gotten out of his kennel and was resting up against the door, so I get up and sure enough there he is. He looks up at me as if to say “oh sorry dude, did I wake you?” I’m sure he didn’t do anything…

Hi :)
Was thinking taking a flyball class. Is anyone currently involved in flyball? How do you like it?
Thanks!