Welcoming myself to the Neighborhood

First postings on blogs are often awkward. You don't know me I don't know you but realistically, at least in the case of this blog, that doesn't really matter. This page isn't really about me or anyone else with two legs. This page is owned, run, and dominated by our two furry boys who crave attention in such an extraordinary way I am forced to forgo normal praise and tummy rubs for a cyber homage in their honor. I think of this as their own personal virutal dog run, and I am merely the PR…

I am so tired of this so called winter, there is now snow just rain and mud. So now I long for the spring and summer...…

Finally, I have time to start writing on the blog. I wanted to do this the first one Man Tau joins our family. However, things were a bit chaotic as my husband and I were not so prepared in this little kid's arrival. Man Tau came home on Jan 6 and he was only 2 months old.

Last two weeks have been the worst days ever. Man Tau caught distemper disease and the vet said he might not be survived. I couldn't hold up my tears in the clinic when I heard the news. Since then, I decided to try… 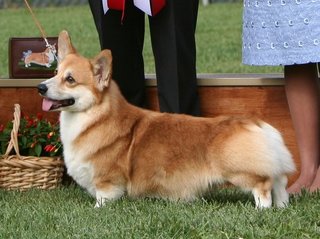 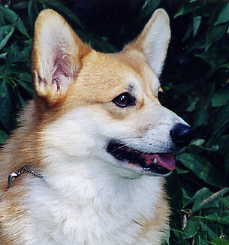 Wow...Ch. Tallyrand No Greater Love (Teah and Siskel's sire), made it to the top 3 all time sires list (PWCCA). This means that there are only 2 other dogs in Pembroke history to sire more CHAMPIONS than he. What an honor to have one of his babies up and coming!

Fingers crossed that Teah will do GABE proud! Triad Two Thumbs Up "SISKEL" is definitely doing his sire…

Trying to Get Handsome George to Go Down Stairs

He goes up stairs especially to follow CorgiBear. But our stairs in the house are carpeted and as he can mosey up them, he will not on his own, go back down. Handsome George was born 9/17/07, and we brought him home on 1/22/08. So he is 4 months and change. CorgiBear came home at about 3 months. She always tried the steps and yea there were some funny moments but I do not remember having to carry her down after being home a week. One…

And the winner is...

The dog food I chose is Nature's Recipe.

My first choice was Authority Harvest Baked, but PetSmart didn't have that for adult dogs, so I went with my second choice, Nature's Recipe with chicken.

Thanks for all of your help and suggestions! I will update my blog to let you know how Gonzo is doing on Nature's Recipe.

Born the only fluffy girl to Lacey and Monty, Miss Pandora is the light of our life. Of course the other light is Mr. Trunks!

We also wish her seven littermates a happy birthday. Pandora is from Marnac Corgis in Kansas.

The arrival of daphne

Hi. This is Bill. Des just picked up Daphne from the airport! i cant wait to get home from school to meet her. I hope Apollo likes his new little sister. 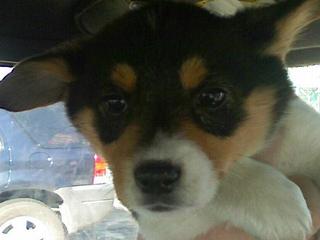 CorgiBear and Handsome George are DOING wonderfully. CoriBear never really engaged other dogs, just people. She runs and plays with Handsome George allot both in the house and outside. We love to see this :) Handsome George is a little sleepy and lazy when he has the chance. Hopefully we will get them outside more often so George can stay fit.

I started a new diet for Rambo and I can notice the difference in his poop and weight. His stomach is getting a little bigger than it used to be. Then when he stretches out to lie down, it looks like a hamster. I wonder if it's because i am not playing with him enough to get him the exercises. He also doesn't like to walk much when we are outside. How much time do you have to spend with puppies in order to keep them in shape?

As you can see by the photos on my home page, Cyberfox is confined to a K-9 cart in order to make his life more enjoyable. This, however, does'nt deter him from playing his favorite game. We affectionately call the game'greased pig'. The 'game' involves three willing participants. One participant to run and hide, one to to be the 'greased pig'(Cyberfox's role) and the third to hold their hands over the eyes of the 'greased pig' while…

OK so I went against better judgement and brought Handsome George into our home. WELL CorgiBEar and George get along VERY VERY well. We have had no gnarling, snarling, growling, fighting! For the first time CorgiBear actually plays with a dog. She would put her nose up and not like to be sniffed by other dogs. They run around the house and of course Corgi takes the lead, George follows right away. Corgi goes to George and touches noses, sniffs, she did not do this before with other dogs.…

Life is unfair! I am the one that just love dogshows and it is going great for me too. So…

My name is Verdidas Frodo and I am a 5 years old Cardigan Welsh Corgi. I live in Sweden with my two and four legged family.…

I just love all the folklore surrounding the corgi breed.

Here are some links to some sites with the legends:

I love the faerie saddle <3

At least 14 Corgi Owners & Lovers. Where

My day thus far (by Stuart)

This morning, I woke up when my daddy did....

I joined him for breakfast (donut crumbs).

Then I went back to sleep with my mommy for an hour.

She got up and fed me breakfast and took me out.

She is always so happy when I poop.

I sat with my mommy as she did her work and read the Times.

Then, I played. And got my tummy rubbed.

I love getting my tummy rubbed! It's the best!

My first corgi on the way!

Yesterday in the late evening I got an email from the breeder. Now it's clear that my corgi will be born approx. 22nd March, a whole moth earlier than I expected. It's sooo great! I'm holding my fingers crossed and waiting for sono. Hope everything will be OK. Let it be March!

My Best Compliment EVER!!

So yesterday we went to the vet to get Blaze's nails trimmed. The vet (who ROCKS!!) carries my almost a year, 25 lb boy back to me. As he hands him over he says "It's so nice to see a corgi that isn't 10 or 15 lbs overweight!!" Yes, Blaze is still a young-un and very active, but still, I felt like an AWESOME parent. Ok, done gloating. . .~Amanda… 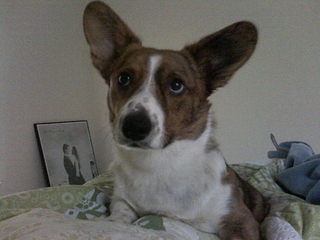