I'm leaving tomorrow morning, to pick up Archie, my very first Corgi!! I'm soooo excited, I hope I can get some sleep. It's a 6 hour drive, and I'm not much of a road traveler. I'd fly 1/2 hr if it was logical, but I know it will be worth it once I get there. I was gonna wait a couple of more weeks, being it's 4th weekend, but the breeder doesn't have any plans tomorrow, so here I go. I figured going tomorrow I'd miss holiday traffic, and be able to have my little guy for the long holiday… Continue

We have a new baby at our house. Today was his first official day with us, and he did very well. He is a rescue and a very good boy.

Many thanks go to Jane Christensen, who rescued and fostered this special corgi, and who allowed us to be the lucky people who got to take him home. Her love for corgis is truly something special. I don't know what group to post this to so I'll just have to post a blog. A plain one until I can get pictures or video of this behavior.
Idgie likes playing with most bugs. When she does, she does the usual pounce.......barking and pawing at it till it's belly up, which I've seen dogs and cats do. The ones I've seen either proceed to eat the bug, or get bored with it since it's not moving and go on to other amusing endeavors.
Once the bug is near dead, Idgie will then (this is…
Continue

My puppy is alive and well but this picture can't help but bring the song to mind from the Wizard of Oz. 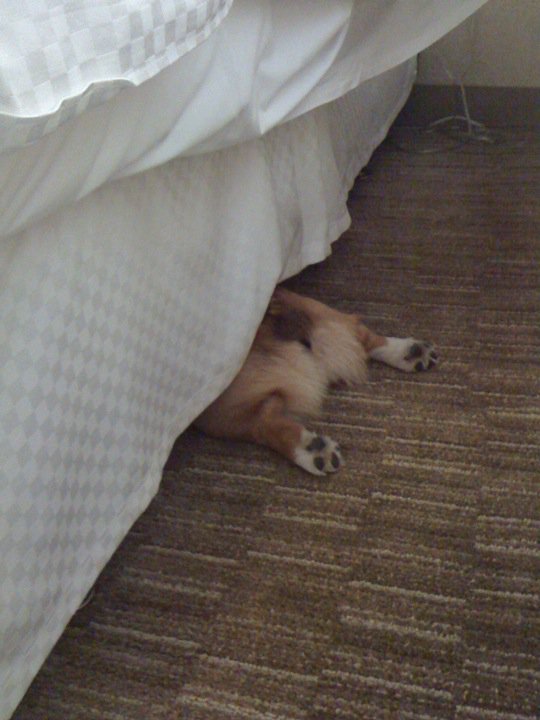 I thought I would share the laughs with you guys this evening :)

At last I got Gwenie's picture up. She is such a beautiful girl to me! I think this picture shows how pretty she really is. OK Iam nuts over her! Thanks for being so understanding about my nutter behavior over her. 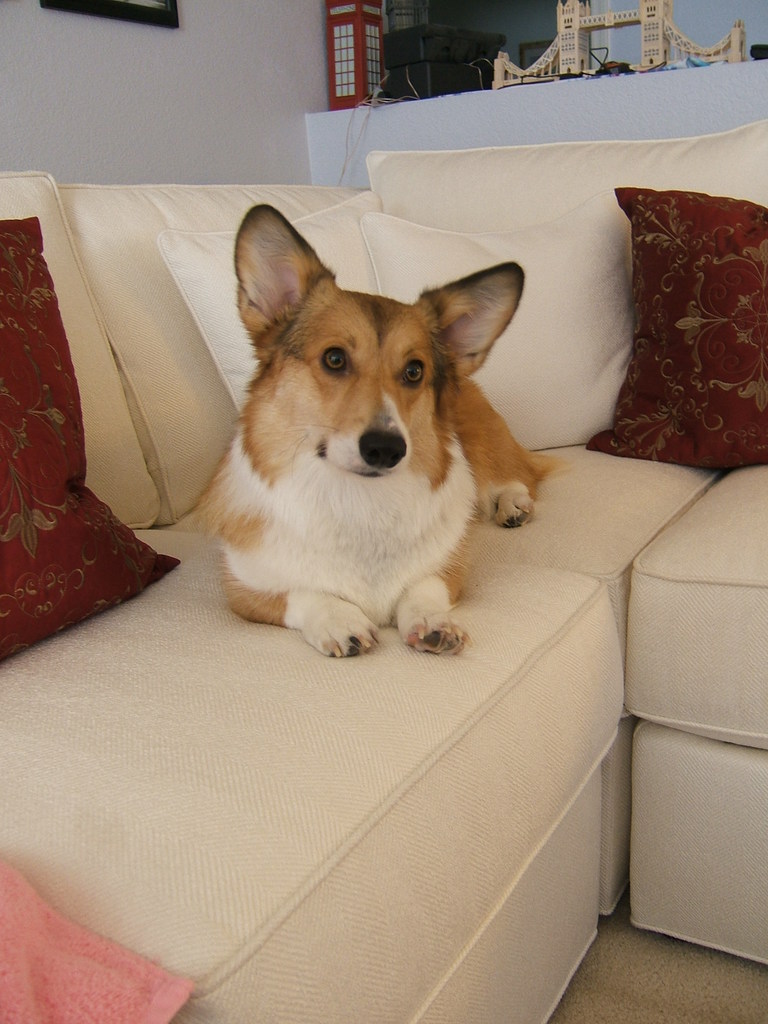 I've never been much of a blogger myself, but have started a blog to chronicle my adventures into showing and breeding, and just generally being crazy enough to have as many dogs around as I do. Check it out for updates and fun pics.

I think this is the beginning of a wonderful friendship"

We've had Kirbs for about a month now. I'm getting to know her cute personality.She's got some definite quirky habits. For example apparently I was extra excited when she finally "shake." That has become her "Please." When she wants me to play she trots over with her toy in her mouth (or not) and paws my leg.
The breeder told us her mother was a thief, she would snatch anything and bolt when you aren't looking. Kirby is just like her! It's as if she knows what she's not supposed to get. She…
Continue

After 4 months of living with us Calvin left today for his forever home! He will have a great life! It makes me sad but at the same time happy as his new owners are wonderful! Every photo I took showed how much they cared for him! They are great! The people have been cut out but Calvin did great walking with his new master! I will be glad when I hear they made it home safely!… This is why we work so hard on socializing our dogs

Jack just recently turned three, so I still vividly remember all the hours we put into socializing him. We would take him to as many busy places as we could on his walks and weekend outings, and I would take a deep breath and overcome my normal shyness, and ask every single person who looked at him and smiled (and who doesn't smile at a Corgi puppy?) "Would you like to pet the puppy?" If they looked a little hesitant, I would quickly blurt out "We're trying to socialize him!" Most people like… Continue

RESPOT: PLEASE VOTE FOR LUNA AS CUTEST PET!! YOU CAN VOTE EVERYDAY! 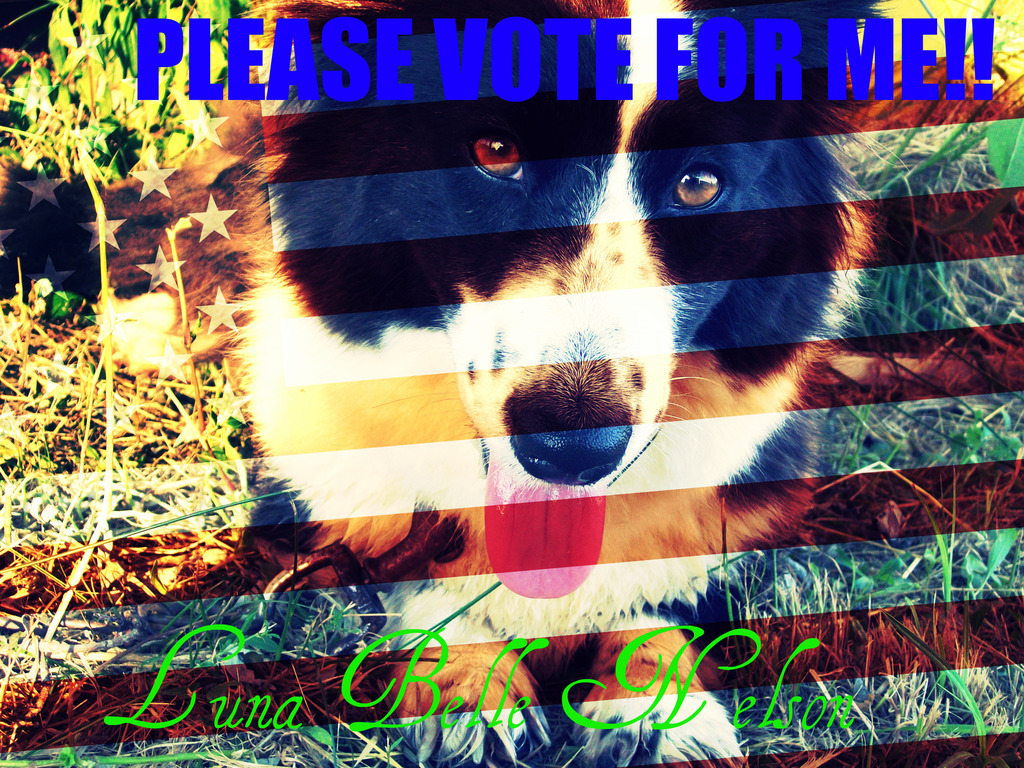 HELLO FRIENDS! PLEASE TAKE A MINUTE AND VOTE FOR Luna! YOU CAN VOTE ONCE<br> EVERY DAY!! SO PLEASE VOTE FOR LUNA! HERE IS THE LINK://www.cutepuppypicture.com/</a></span>.<br>;
THANK YOU SOOOO MUCH<br>
FOR PEOPLE WHO VOTE FOR LUNA! I WILL LOVE YOU… Continue

This is not corgi related, but I just don't know what to do.

I am an artist. My husband had gotten a job that allowed for me to quit my job (which to be honest paid next to nothing by living standards) and pursue my art. Today he was laid off. He is a chemist with a masters in environmental chemistry and I have a bachelors in fine art. He is potentially marketable, I however, am not. He has been applying to other jobs, but most places have been responding that there have been an overwhelming number of applicants and essentially saying they were not… Continue

Bear and the Evil Bad Goats!

Tammey, Bear, and I are on the road again. I am sure that you all don't know but at the end of every trip when we get home I moan and cry about being too old for this job and say that I am never going out again. Then they offer me a job going some place that I love and there we go "again". On this trip we left Dallas headed for El Paso and Las Cruces and then up through White Sands and the Apache Reservation (yeah, we just got back from there) to Roswell and then on up to Fritch, Tx. Fritch…

Hey Everyone My Stump is Still in the Running for Arizona Next Top Pet! If you could continue to Vote for him Everyday Until July 5th 1ce a day! Thanks for your help! http://www.mix969.com/pages/arizonas-top-pet/vote-entrants.php?type=d&gid=1&id=42

The Beach and Fleas

Monty and I just got back from Duck, NC and had a great time. He loved the beach and all the stairs at the beach house! He would attack the waves and frap about in the sand. He made lots of other doggie friends as Duck is very doggie friendly. Unfortunately we did have one issue. FLEAS! He is on Frontline and plays in the woods everyday with no problem but it seems the Southern sand fleas are immune and latched on to the poor guy. I went to the local dog store and got some neem spray and soap… Continue

Callie is not a scardy dog, but yesterday she had a few experiences that scared her. *I would like to point out now that she is fine, she just got scared at a few things. Nothing to worry about*

The first thing that terrified her was while at Petsmart I set her in the cart because she was being a pest and the cart was hard enough to push without having her tugging. She freaked out and I just had to balance pushing a cart with dog food and keeping Callie under control. Not an easy… Continue

Hey I'm new to my corgi. My corgi is named george be our friend!!!!

It's Been A While!

Sorry I haven't updated in such a long time! Things have been going well. A little hectic but well :) Both mum and dad got new jobs! They're gone much longer now but at least the extra cash means I get new, exotic treats. They picked me up an antler last weekend. Too bad it's only a nub now! Mmmmm antler. Anywho, my sissy is doing great :) She's 2 1/2 now so I guess if she were a dog she'd be going on 21. Hmmm. She loves me like crazy and its been awesome having someone to play with me all…

RESPOT: PLEASE VOTE FOR LUNA AS CUTEST PET!! YOU CAN VOTE EVERYDAY!

HELLO FRIENDS! PLEASE TAKE A MINUTE AND VOTE FOR Luna! YOU CAN VOTE ONCE
EVERY DAY!! SO PLEASE VOTE FOR LUNA! HERE IS THE LINK: http://www.cutepuppypicture.com/.
THANK YOU SOOOO MUCH
FOR PEOPLE WHO VOTE FOR LUNA! I WILL LOVE YOU… Continue

I saw a listing on Craigslist that some of you may be interested in. I hate seeing ads on Craigslist for Corgis..it worries me that may not go to a good home. These two Cardigans are in a rescue now because their owner died. They are seven and eight years old and are current on shots and spayed and… Continue

Recently we got a postcard from a pet boutique store about their new store's 'Grand Opening Weekend'.
- We don't know how they got our address and name for the promotion postcard.
This weekend it offered free nail trimming, free giveaways and discounts.
So we took Jeter there today. (Cappy is still too young to go to the pet store.)
The store is nice , clean and the sales associates are very friendly.
There were many dogs in the store but Jeter was the one who got all… Continue