After having a video camera for over a year, I've finally gotten around to posting my first video on YouTube! Of course my first video stars Toast. Nothing exciting, but I'll be sure to put up more in the future that have more action going on ;)

Anyways, this is a start!

"Toast Sleeping On His Brand New Bed", from October 15,…

Christmas is dangerous at grandparents house

If I thought people at home feed the corgi, my father, kirby's grandfather is worse! Lets see there was the turkey, the ham, the cheese, the crackers, the .... need I go on? That dog is not going to lose this month. Guess come deep snow and all the other stuff Kirby and I will have to work out when I get him out of here.

Have a great weekend! 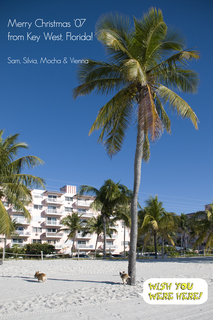 We're spending the holidays in Key West, Florida this year. Mocha decided to write y'all a note :) 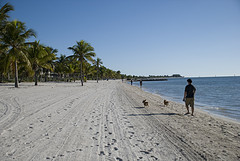 This is the beach across from the hotel we stay, me walking the doggies in the morning. 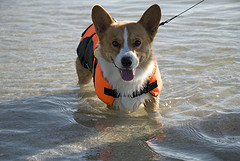 This is as deep as Mocha would allow us to walk him into. 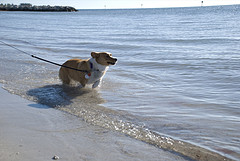 Vienna is a water corgi, she hops and leaps into water.…
Continue

We decided to stick with Mia. (MiMi for short) She already knew her name and it was too hard to try and change it!! I did really like Noel but then we thought she might get confused when we said "No" lol. Anyways thanks to everyone who gave me ideas....

We had our Christmas early today...she slept through all the crazyness... smack dab in the middle of the floor!

Hello to all at mycorgi.com.

Wishing you and your family a very very merry christmas...aroooooooooooo 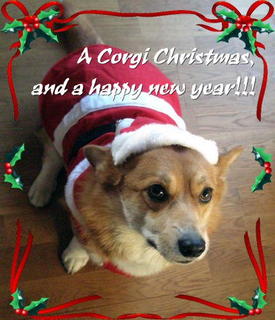 We just got a new baby today! She is a little girl, 8 weeks old today and she is adorable. Dingo is getting along with her....he's already hearding her and chasing her around. I think she will fit in just fine :)

Right now her name is Mia. But we want to change it to something more "holidayish" does anyone have any cute ideas????

It's so difficult waiting for a pup to turn 8 weeks old. Lexie can come home on 1/10 and I am counting the day's and begging the breeder for photos.

It was raining here in So. Cal after a fairly warm winter weekend. This meant that we couldn't go outside for our normal walk. On rainy days, or lazy days, we like to play fetch indoors. This is how I keep my Corgi nice and exercised when I am unable to take her out.

My girls gave me a big scare last Friday morning. My husband accidently left the gate to our yard open & they escaped to the big world beyond. He went out to the street calling them with cookies in hand, but with no response. He came in to get me to help. By the time I got to the back door, Molly had already returned. I think it dawned on her that she might miss a meal. Food is her number one priority.

We let her in & both hit the street to look for Bonnie. It was still dark…

I decided it was time to take some pics of Miss Madeline playing outside with the neighbor pups. So, we went and had a little snow day fun. Here's one of the pics: 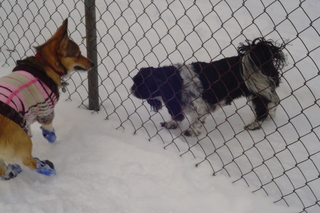 The rest can be found here:…

Dallas would like to wish all her friends on MyCorgi.com "Appy holidays" (since we say her barks sound like "apps")! She's excited for the drive home to "Grandma" and "Grandpa's" house and the farm and to play in all the snow Indiana has gotten the past couple of weeks. (She hasn't gotten to see snow since she was a puppy before we moved to warmer climates.) I'll take some photos and try to do some video on my new cell phone for all to share in her joy of snow and the horses.

I found that article online today. It's about the Humane Society of the US going undercover into puppy mills.

I have never bought a dog from a pet store, nor will I ever. I've always told everyone thinking about buying a dog not to go to a pet store, and they are horrified when I tell them where they come from - whether they actually listen to me or not, I'm not sure. I got a girl…

I took Maddie for her first walk with booties. It was NOT easy to get them on her - she fought me the whole way, but I really think she liked them once they were on. It's as if once we started walking she realized, "I can't feel the snow! My paws are warm! I like this!" The entire walk she wouldn't walk on the sidewalk, she wanted to walk through the snow that had accumulated on the grass. When she came home her boots were covered with snow. Here are some pics of Maddie in her coat and…

The moment you all have been waiting for...See Gonzo from the beginning - 8 weeks - to the present!

posted a bunch of pics of Blaze (when he was younger). . .check 'em out and let me know what you think!! :)

The MyCorgi.com 2008 Calender is finally here! Thank you for all your photo contributions and participation in the voting. It was not an easy task to pick from 130+ entrees down to 50 semi-finalist. With the help of our members, we were able to pick the final 12. To see the 12 finalists, or to purchase a copy of the calendar, click here. To see the inside pages, click on the link "View Calendar Pages".

I haven't added any photos yet, but I did manage to get videos up! Check them out. Gonzo's a lot bigger now, my profile pic is from April!