Advice on Buying a Second Corgi.. ?

For those of you who have several corgis. I have only one corgi baby so far, 9 weeks old. Eventually I would like to get a second corgi. How do corgis react when you bring home a second one? Do they get jealous? Are there any posessive problems? What is the best age my first corgi should be at when I bring home her new brother or sister?

Permalink Reply by Bev Levy on August 9, 2010 at 7:20pm
We got our second when Sparty was about one year. He has always loved other dogs and was thrilled from the very beginning. I think it helps to have your first fairly well trained before adding a second so you can concentrate better on the new one. Also, be sure to socialize your current dog with others as much as possible so they will be more receptive to a new sibling. We tried to find a more mild mannered second dog just because Sparty is soooo energitic! She was still a great playmate for him.

Permalink Reply by Vee Luther on August 9, 2010 at 7:21pm
We have had 3 corgis most of the time and found tht it worked really well for us to have them about 2 years apart. The older guys are a great help in housebreaking and teaching when to be quiet, when to play, etc. We've had only males and have never had any fighting or territorial behavior among the trio. Right now, my guys are 4, 2 and 8 months old.

I really love having 2 or 3 dogs together. It doesn't seem like much more work at all and its a lot of fun to take the 3 on a walk together. Each has been to obedience training, too.

Permalink Reply by Jane Christensen on August 9, 2010 at 9:54pm
I recommend at least 1 year. It's so much fun enjoying each "puppyhood" alone and the young one can learn from the older one!

Permalink Reply by Roger/Laurie on August 10, 2010 at 7:58am
Ours were 14 months apart and everything went well. The second was a rescue with many social/behavioral issues and the older one was very patient and a good role model.

Permalink Reply by Beth on August 10, 2010 at 12:09pm
I would say one year minimum, unless you are a very experienced dog owner with a lot of time and even then it's tough.

It really depends on what you are looking to do. If your dogs are primarily pets/companions, then by 1 most dogs have the obedience basics down. If you are looking to do any advanced training, you won't even be getting started til the pup is a year old at least, and may find a new puppy detracts from training time.

My ideal is 2 years apart; dog #1 is still young enough to be receptive to a playmate, but solid and past the testing stage. Mine was thrilled to have a new friend move in; he was like a kid at Christmas. Alas the newcomer was an adult and she ignored him for several weeks. Now they are buds.

Permalink Reply by Misti, Guinness and Finnegan on August 10, 2010 at 3:27pm
Guinness will be 3 soon, and Finn is 14 weeks. We got Finn at 6 weeks. Guinness has been great with him, but we do get moments of him looking at us like "When is this pest going to his own home?" But they play well together, and Finn is potty training fast. Guinness has always loved other dogs and has been well socialized, so I wasn't too concerned.

Permalink Reply by Carol Rea on August 10, 2010 at 4:27pm
Lucky was rescued out of the snowbank when Odie was 16 mo old. Odie was very well trained and from the start accepted Lucky like a little brother, Odie was definately the Alpha and let Lucky know this from day one. We never had a lick of trouble. They were best buds, played great until I got sick...then Lucky was not allowed near me! Lucky took to herding the cats and when the cats would not stay put (go figure) he started on the lawn chairs which were much more obedient!! Once I was back on my feet 4 months later, they were best buds again. Odie died when we were packing the house to move, Lucky would look into the boxes to try to find his friend.

Permalink Reply by Monica, Orion, and Laika on August 10, 2010 at 4:33pm
I got a 9 week old pup (Laika) when Orion was three months old and after a day of Orion protectively sitting on me they turned into the best of friends. With adult dogs I think it takes a little longer to accept a new pup. I was planning on getting a second corgi anyways but in a year or so (I wanted a black-headed female tri too) and Laika fell into our laps as a foster (I foster cats for an animal welfare organization) and we will be officially adopting her soon since she and Orion are so fantastic together. If you can get your second pup while your first corgi is still pretty much a puppy (maybe about a year apart?) I would suggest doing so, I think its a lot easier than introducing a puppy to an adult but if you have a well socialized dog they'll probably adjust well to a puppy, no matter the age, it just may take a little longer to warm up to them. So as long as you make sure to have lots of other dog interactions with your pup now so he/she is well socialized I don't think you need to worry too much about the age thing.
Orion and Laika are the best of friends: 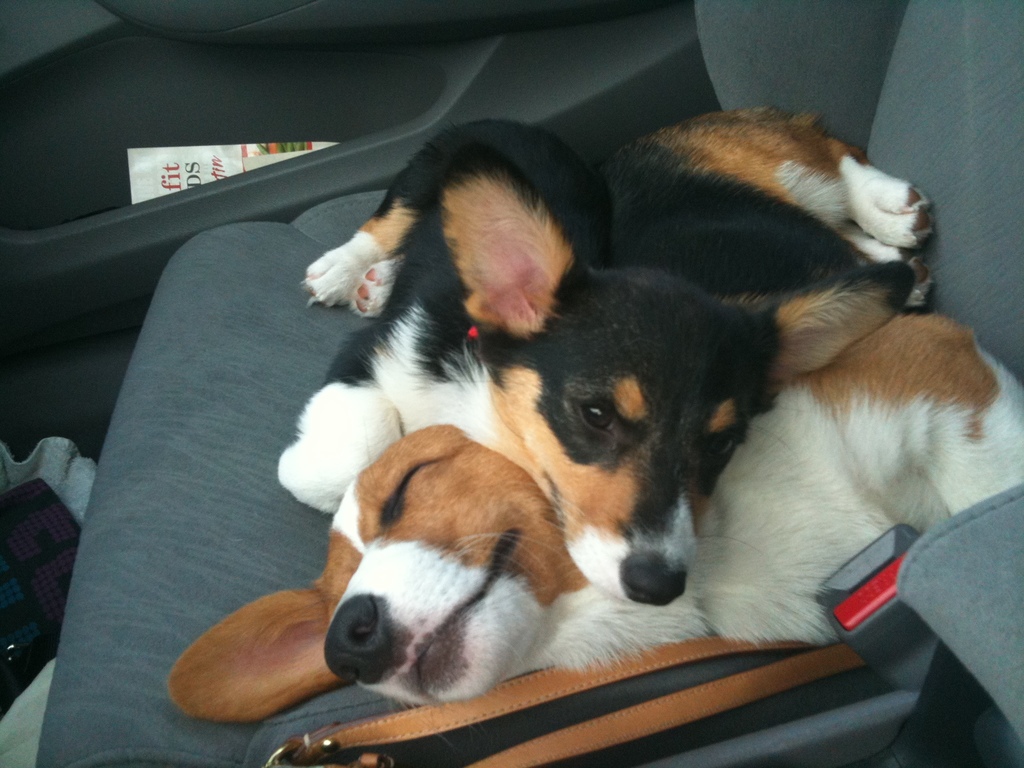 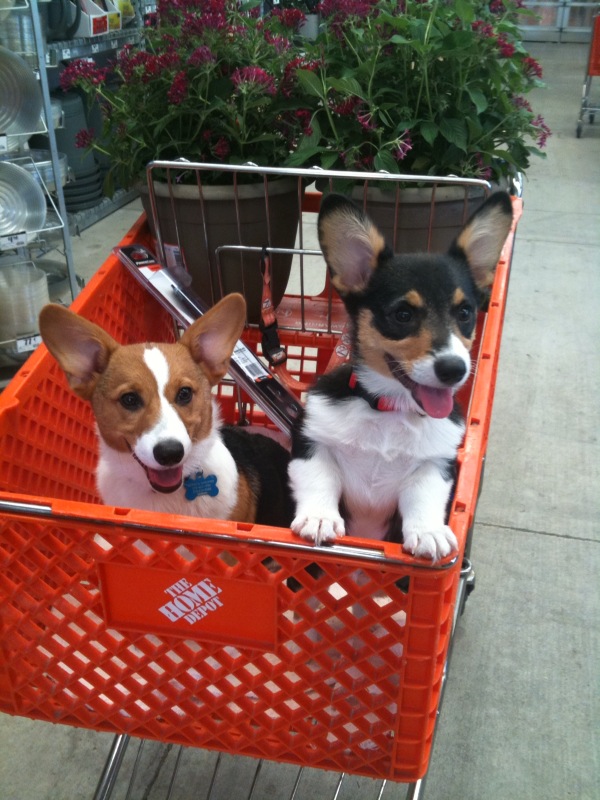 Permalink Reply by Monica, Orion, and Laika on August 10, 2010 at 5:01pm
They're inseparable! Usually when I took just Orion to the dog park he stayed on the big dog side but once when I took them both I went on the little dog side because Laika was slightly overwhelmed (she's small even for her age) with all the big dogs. Orion was bored with the little dogs so my sister said she'd watch Laika so I could take Orion to the big dog side but when I brought him over he and Laika sat on either side of the fence making sad faces at each other and wouldn't move so I had to bring Orion back in so he could be with Laika haha

Permalink Reply by Betts on August 10, 2010 at 5:43pm
Chloe was 3 when we got Rufus, and with hindsight I wish I'd gotten her a friend earlier. We had a very elderly dog who would only occasionally play with Chloe, and she started having some neurotic behaviors despite being walked at least daily, having regular visits to the dog park and going to doggy daycare twice a week. My son said, "I think she wishes she had a dog to play with, instead of just people" and the more I thought about it, the more I felt he was right. When we got Rufus, we could see how joyful she was. They would play until exhausted, and some of the odd things she was doing completely disappeared. One of my biggest regrets is not getting her a friend sooner, now that I know how little time she had in this world. I'm going to get Rufus a friend just before his first birthday, since I think he misses having another dog in the house badly.