Well her diet is going really really well I believe. She has been on Canidae ALS Grain Free (1 cup) and green beans (1/2 cup) for about a month. That along with exercise and treats of skinned apples. Yes...skinned.. She won't eat it otherwise. Silly corgi girl! She hates carrots. Would rather just not have anything. Anyone have any other suggestions for treats? Cause I feel bad when she looks so hungry, just a corgi thing I know. Plus her two front feet are looking better. She had decent sized… Continue

Update about the rabies shot.

Rocky came home in fine shape today. There is still a bit of puffiness in his face, but he hasn't been itching or any other unusual behavior. So for now, I'm happy to report that he seems to be ok. He did mess in his kennel today, but I'm cutting him slack since I left his leash at home and couldn't walk him before the ride home from the vet's office. He's never done this (save his first night in it) and hasn't messed in the house all night, so I think it was an accident.

I am not… Continue

Its been great to have a new puppy around the house,our house was getting too quiet. We picked up Dyllan and his brother Koby my daughter Jamie took home at the same time. We live close so they get to play and have sleepovers. The boys came home to meet my husbands German Shepherd her name is Korie. They all get along great Dyllan is the aggresive one he lets the big dogs know he is boss. We took them all to a corgi round up and it was great, Dyllan even behaved,Kori gets along with all the… Continue 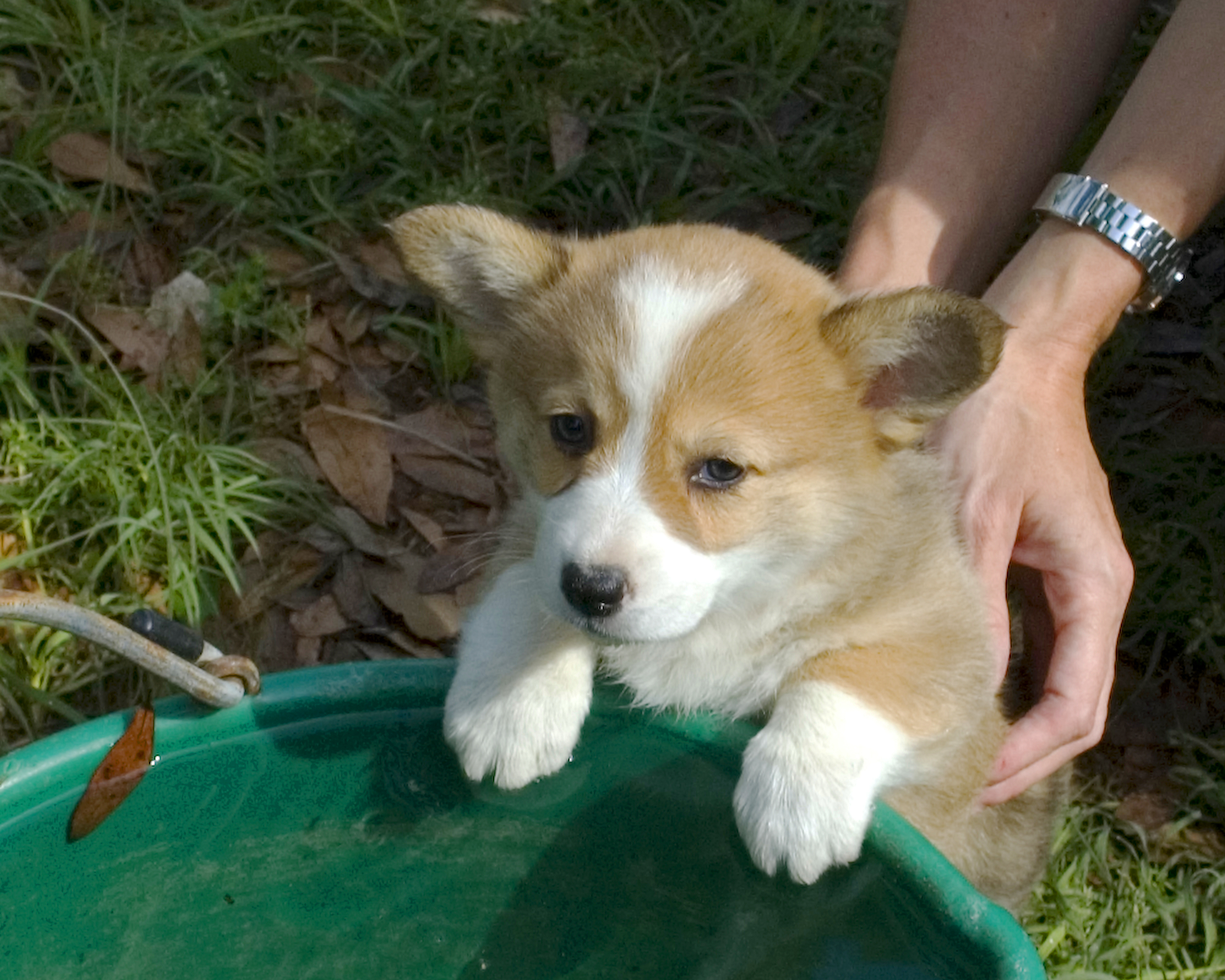 Tegwen has grown so much in just one week! She is enjoying a life of sunny days on the Corgi ranch. We cannot wait to bring her home...

Has nothing to do with corgis but it's a really sweet story...

assigned seat. It was going to be a long flight.'I'm glad I have a

good book to read Perhaps I will get a short nap,' I thought.


Just before take-off, a line of soldiers came down the aisle and

filled all the vacant seats, totally surrounding me I decided to

'Where are you headed?' I… Continue

Flea and I are new to this website and we are looking forward to meeting some corgis and their owners! We don't know anyone that has a corgi!!! Flea thinks she's a giant dog, as most smaller dogs tend to do. She is a great little companion and has a super personality. Right now she is snoring in my lap taking an early morning snooze lol! She is a very vocal dog, especially when she and her sister play, they sound like two Tasmanian devils. Flea is also very much like a toddler, she will sit on… Continue

Today Rocky had his last set of shots from the vet until he gets neutered. Sadly, I'm waiting until morning to see if he makes it through the night. About two hours after he got his rabies shot, he laid down for a nap (after having dinner, playing fetch, barking at the cat.../sigh, and snuggling me) and when he woke up went to mess with his water bowl. I hadn't looked at him in about 20 minutes, and then saw his face and eyes were so swollen up that he almost didn't look like a corgi. I felt so… Continue

This is the stage they really keep me going..surprisingly enough they did well for their photo shoot tonight. They each know their names as the new owners have chosen and come whenever you call them. They are a really a sweet group of pups. They all are great to do their nails, feel their teeth, and taking a bath. I will miss this group when they leave.
SAMI 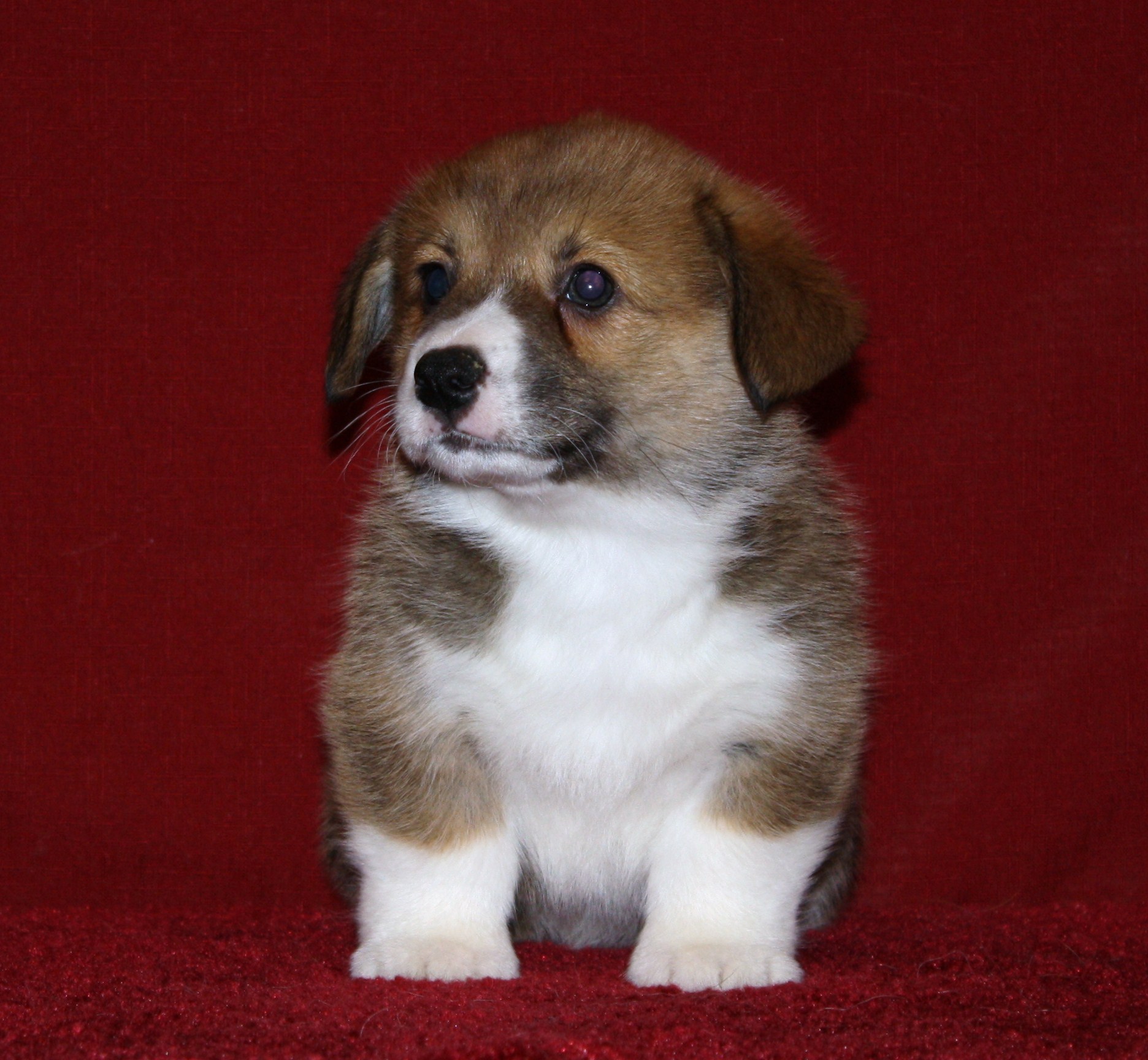 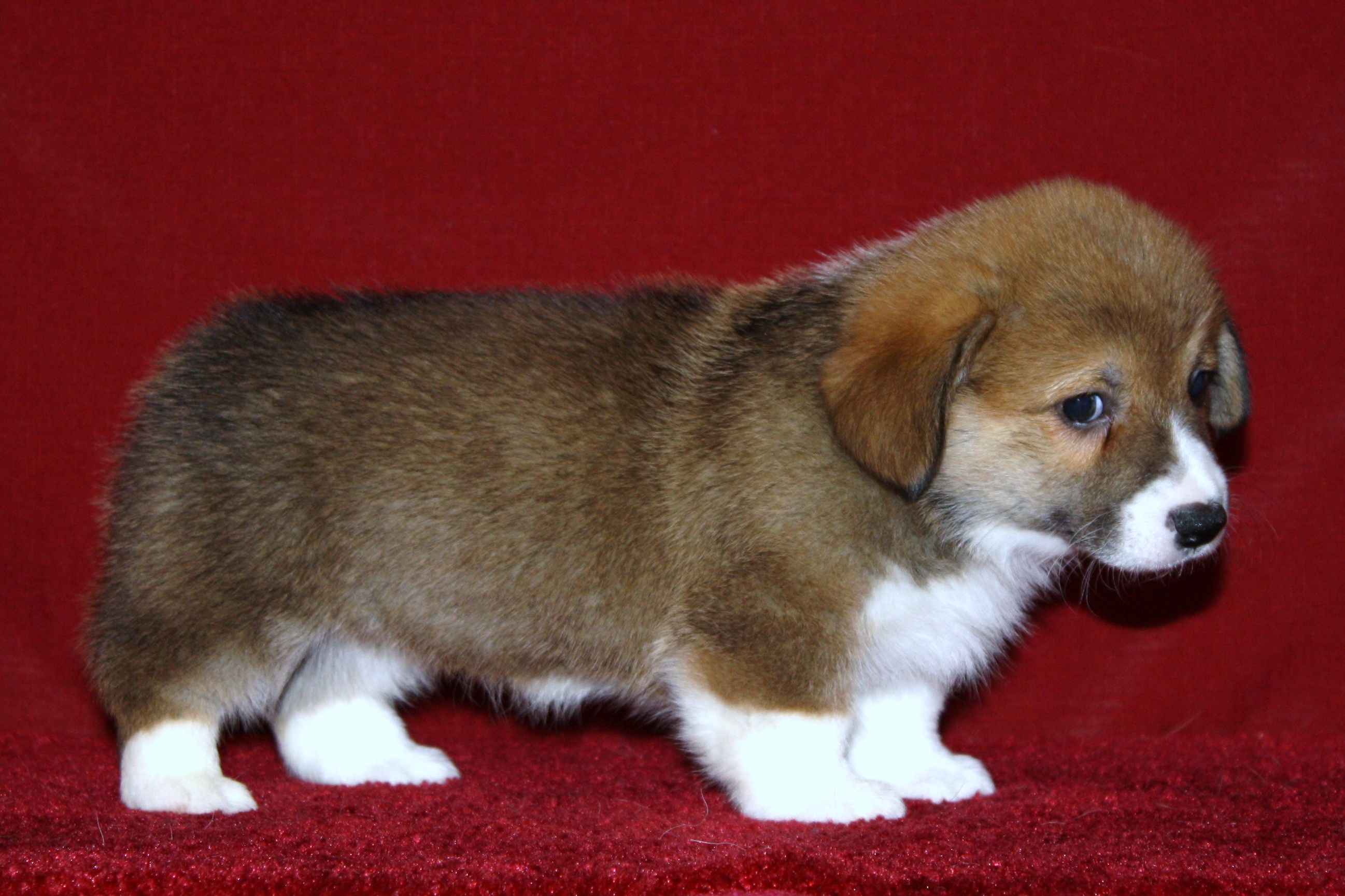 I'm waiting for it tonight. I'm waiting for the bloody vomit. I know she lost another tooth rough housing with our other dog. I only know this because a white Weimaraner can hide no evidence. Also, Freya was happily laying on her back in the kitchen while I was cooking and had her mouth open and I could see the tooth next to the k9 was no longer and bloody.

I have never known a dog to give me so many tells when she was losing her teeth before. I'm kind of concerned that she may have… Continue


Find more videos like this on MyCorgi.com
So Ms. Penny have been with me for 10 days now, she is recovering well and doing wonderful… Continue

Over the past couple of weeks I have had two families contact me looking for safe homes for their beloved young male Corgis (one is one of my pups that was purchased last year). Sometimes life changes and a Corgi no longer fits our plan. Sugar Bear and Paddington both come from loving homes and need to go to Corgi-loving homes. Please send me a email at lookoutfarm@gmail.com if anyone is looking for a little guy to love.

Zachary and I had another corgi. Her name was Truffle... Brought Cooper home yesterday- he is such a sweet boy.... 13 weeks old today. Slept through the night in his crate and takes his potty breaks very seriously. One ear refused to pop up on its own so he will will be wearing masking tape for awhile (we think of it as a fashion statement). He thinks big sis Bailey (7 yr. old Lab) is a black sheep and has already tried out his heel nipping talents on her . Bailey calmly lifts up bothered leg and looks at me as if to say "what tha....???"

The video wouldn't load direct, so here it is on You Tube.

Maybe some answers on dog food

As I have said before I am no computer whiz. If you have questions on food I posted on Forum in Corge Health. Maybe this will help someone else. Hope so.

Sidney, star of the stage

My daughter got permission to include Sidney in the spring play at her high school! It is called "He Who Gets Slapped" and it takes place at a circus. Sidney and his friend Pepper were circus dogs! They had a busy tech week, worked really hard and did great up on stage. They playgoers just loved seeing Pepper and Sidney, and I have to say Sidney looked so handsome and at ease up there, looking out and the audience and smiling.

Here he is in his costume:…
Continue

Skeezix Wants to Know: What Kinda Dog My Momma Iz?

You'll prob'bly remember that I talked about me an George Clooney in a pwevious posting, in which I analyzed how on earth a quiz could match the perfect 10 ME with a hooman who only has an Oscar to boast of. Now, Momma haz gone an dones it again, but this time it's for her an not me . . . thank goodness.

Next thing you know, she'll be putting sparkly collars on me . . .. runnnnnn awwwwaaaaaaayyyyyy. Faaaaaaaaaaaaaaasssssssssssssssst. No sparkles for me.

As I said, this… Continue

New to My Corgi

I am an owner of two Pem Welsh Corgis. We've had Shorty and Fiona for about three years and they're great.

They're great and loving dogs but we've decided to take them to obedience training so they can better socialize and I learn from a professional.

Anyhow... great to be here and hope to learn and share from people's experiences.

...and so are mothers. My husband and I stopped at the fabric store as I had some projects in mind. My mom then came over, bringing a sewing machine, my sister, & their dog, Capri. And this is what we made! 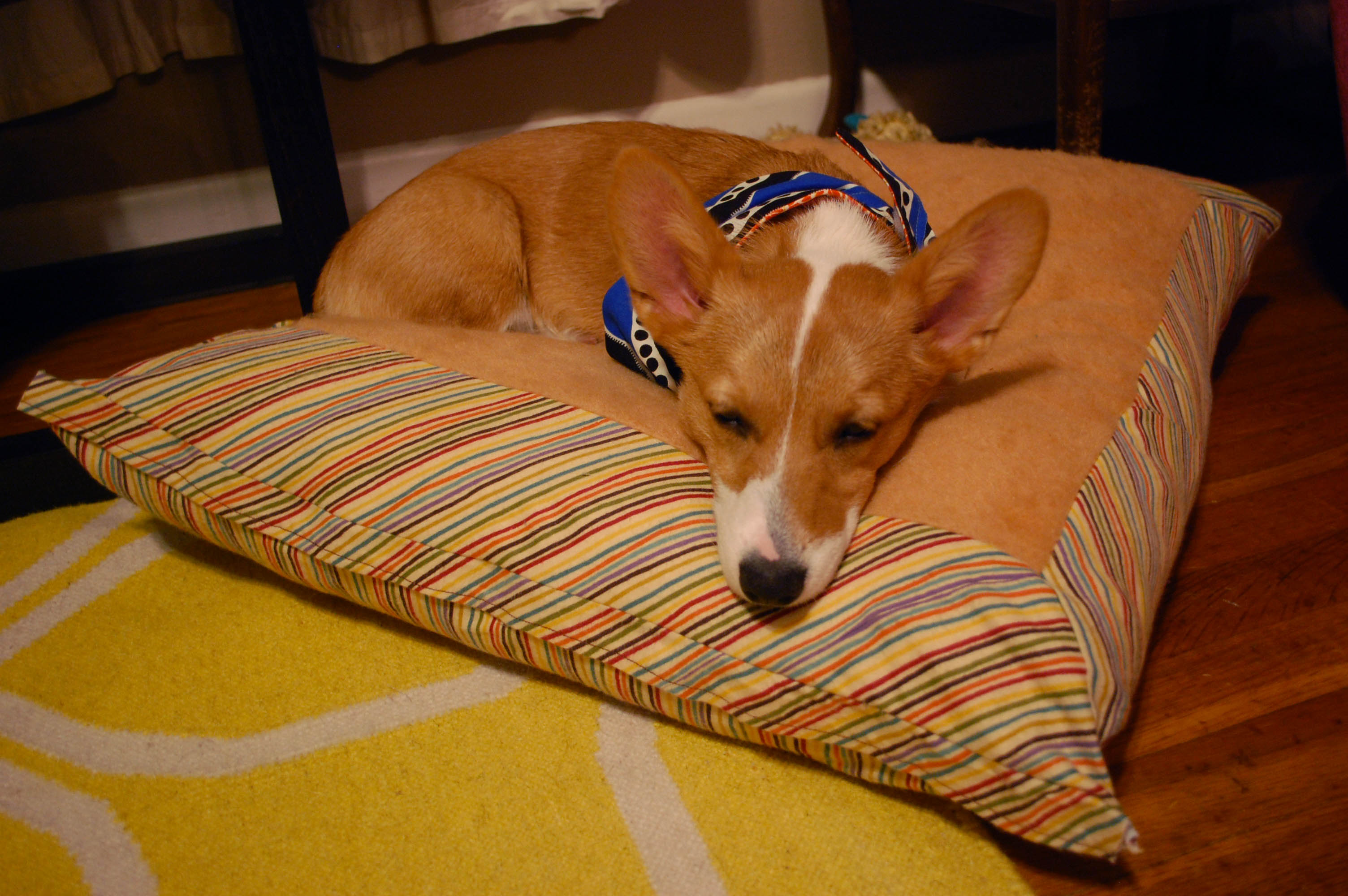 I bought some fleece type fabric of 2 sorts (one I have not used yet and will be for a future bed) and a large pillow form that was 50% off. I then decided I wanted 2 textures and got a faux fur sort of fabric, that matched Pooka's… Continue

Moving to the Milwaukee area

My husband and I are moving to the milwaukee area soon, the west Bend area, I am hoping there are corgi clubs or groups that I can look in to so that I will get to know people, Can anyone help!!

Thanks
Katie, Scooter and Eddie