Well, today we had our first puppy class. Sterling definitely loved all of the puppy play time! We learned commands he already knows, like sit, but it was really hard to get him to focus on me with all those other puppy buddies around. I was a little disappointed that he didn't listen better, but I guess I expected too much at his first class. My expectations were just so high because he listens so well at home!
Anyway, I think this will be great for him (and for me). We're looking forward… Continue

I don't know where the years go, but my handsome little man turns 6 years old today.   Hard to believe how much one little dog can change your life.   Happy birthday sweetie. 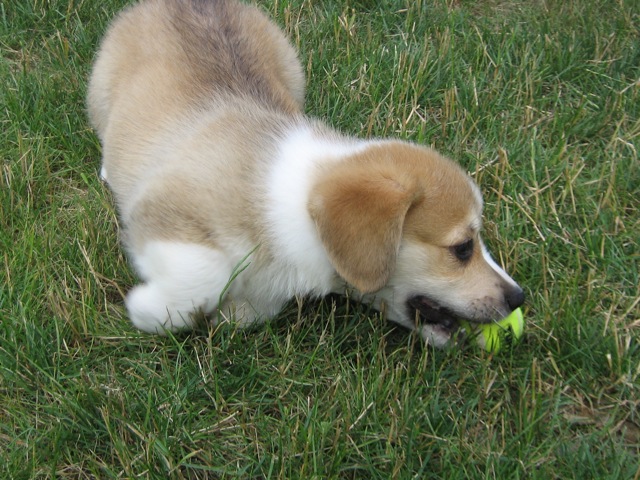 Just a add on. Winston crossed the bridge. Our thoughts are with the family.

He has been found healthy and safe!!!!  It's posted at OCD and wanted to let you all know he is home.

This past week I have watched on facebook as Wendworth Corgis (one of our members) frantically searched for beautiful retired Champion Winston. He was recently retired to a new home and has been missing for almost a week. He is in the Broadview Heights area in northern Ohio. Has been sighted at the Briarwood Golf course. Any mycorgi members in that area keep an eye out for him. He is a beautiful red headed tri.

A string of "accidents" after we moved:

These accidents have not been happening constantly, maybe once or twice a week, but they aren't at reasonable times (like when I have a seven or eight hour shift at work) but when I am home and have recently taken him out to…

I just stumbled across this artist who paints the most adorable Cori-themed paintings. Here's one of them:

Things that you're forced to wear when you're a Corgi

Cute article I came across on BuzzFeed!  My old high school classmate's corgi just happens to be #12. =)

Paws in the Park Fundraiser for Save A Dog!!!

You can find our pledge sheet at …

I was feeling discouraged. Hunting for the healthy Pembroke puppy with a tail is a tiring task. I was talking to my sister about just rescuing, I already have guilt for going with a breeder. Maybe my first dog is not supposed to be the dream dog. Maybe I am supposed to adopt some LA puppy. And maybe I am.

But then I ran into a corgi.

It's name was bubbles. Bubbles balanced treats on his head, he high fived with both stubs, he put his head in my lap when I petted…

My puppy was born late Sunday night, and the breeder posted a picture of a sister on facebook. They're so teeny right now at 4 days old, they don't even look like corgis, more like guinea pigs. I don't get to chose which puppy until they are about three weeks old, but I do get the pick of the litter :) SO excited. The name list is getting longer (it's about 20 names long right now, if not more), but I decided I likely won't name him until I meet him. We've stuck with a lot of movie, tv and…

We had a few days off from school and one of our friends is originally from Montana. We offered to drive her there to see her family if she wouldn't mind if we stayed with her for a couple nights. She was all for it. she loves sterling almost as much as we do, and wanted us to meet her gigantic Aussie Kelev.
The drive out there was awful. We were having a terrible snowstorm in MN and it added 3 hours to our trip. We saw so many vehicles in the ditch. It was a little scary. Luckily,… Continue

Hi all! Any NorCal Corgis here? We're trying to put together the First Annual Bay Area & Northern California Corgi Meetup at Fort Funston Beach next month... if you wanna join in on the fun (and try to beat SoCal's attendance of 140 Corgis), then come join our group:https://www.facebook.com/groups/bayareacorgis/

We had quite a scare tonight. Tootsie had a very large and swollen tummy. She drank a lot of water and then urinated a bunch on her walk.  Brian thought something was up but he kept trying to put it to the back of his mind and tried to make himself think that he was over reacting.  Tootsie came in from her walk and was lying on the floor. Brian rubbed her tummy and heard a sound that was similar to Toots passing gas.  He looked down and frantically called for me.  Tootsie was bleeding…

I knew something was amiss when two corgis greeted me at the door when I got home for lunch. Where in the world was Tristan? As I walked in the door, I heard it - an unmistakable rustling sound. I pushed open the laundry room door and there he was, head buried deep in the dog food bag, gobbling food as fast as he could. I dragged him out of the bag and brought him out with the other two to survey the "damage". Pooh-Bert looked pregnant. I mean this boy looked like he'd swallowed not one but two… Continue

I'm sucha weirdo... but I'm super happy that MOMO is finally getting the hang of FETCHING!

He'll run after sticks when i throw them and then come running back with them and either DROP on the ground at my feet or hold onto it until i tell him to leave it/drop it.

Still not a perfect game of FETCH, but for a pup who has not ever played or done fetch, i'm quite happy. I think will keep working with him on FETCH. <3

I placed my dogs in to some movie posters!  Enjoy!… 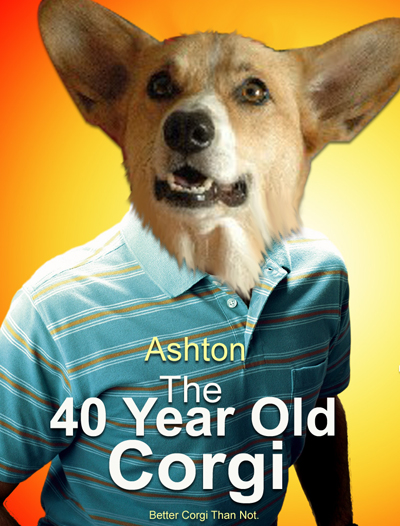 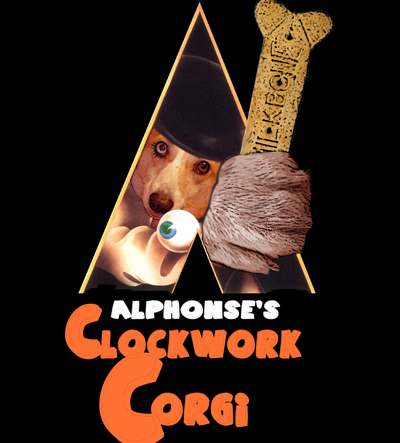 I noticed Ellie herding for the first time last week. Usually, it’s just me and Ellie alone in my apartment, and she knows better than to try and herd her “alpha” so it’s never been an issue. We stayed with my mom last week, and it’s unbelievable how quickly that herding instinct appeared when there were two people in the house with Ellie.

Every time my mom would move off the couch, Ellie chased after her, lunging and barking and nipping at her heels. My mom said it felt like a lick,…

It's Gilby's first birthday!!! This has truly been the best year of our lives, I can't say enough wonderful things about Gilby!  He's smart, funny, wonderful, amazing, and so sweet!  He is a joy every single day, and gets us out to experience wonderful things every day!

Here's too many more years of corgi filled bliss!… 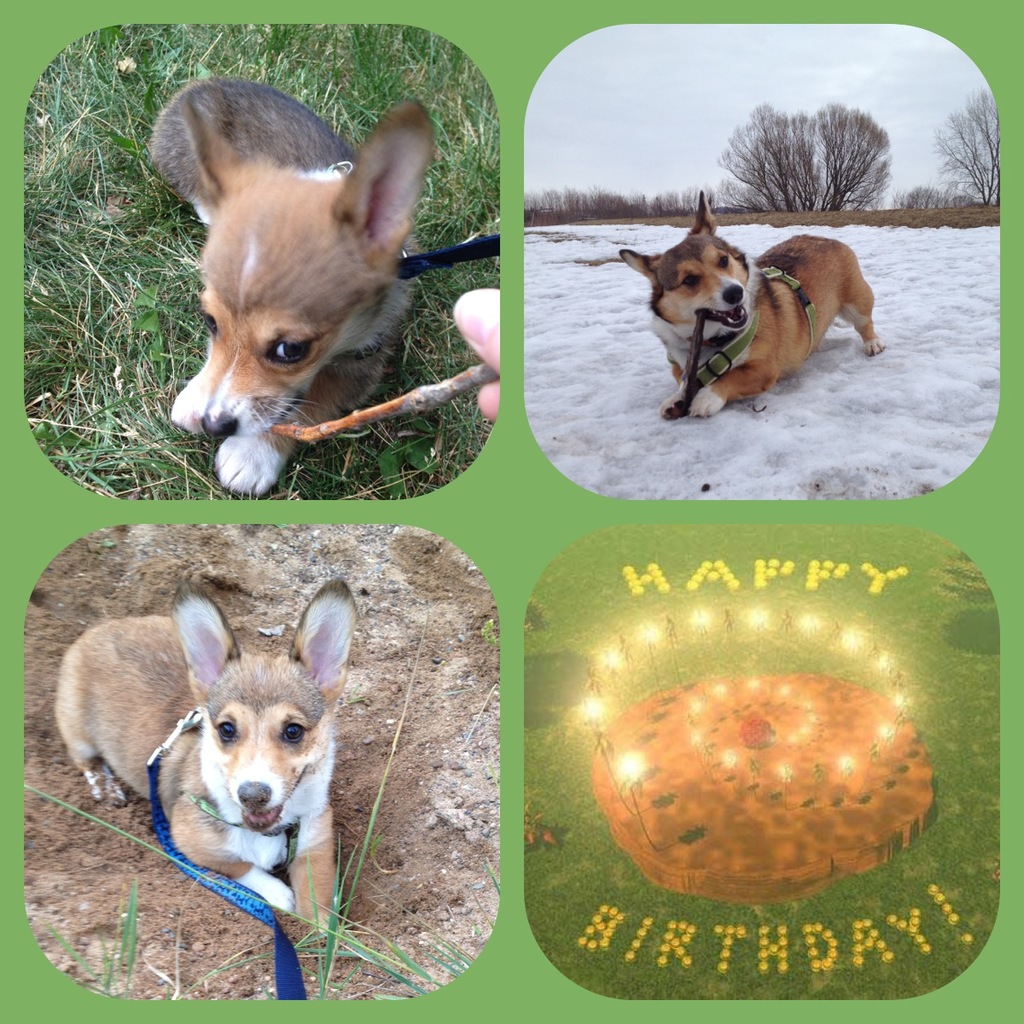 Oh my gosh, this was SO much fun ^ ^. Napolean met so many new faces that he actually didn't have to look up to meet, haha. We met other mycorgi people there too, our people! Can't wait to go to the next meet in June; I hope there will be even more than this time (there was probably a good 100 corgis this time around)

HERE'S A VIDEO of our experience!: http://youtu.be/7OH2brqLqzo