My boyfriend and I met our puppy Starbuck today. She's about 6 and a half weeks, and we bring her home in less than two weeks! She's awesome. At first I was nervous because she was the only puppy not jumping around and stuff. She just laid quietly in my arms. My only thought was, "Please don't let her always be the puppy alone in the corner!" meaning please let her not be antisocial and scared of everything. After just a few minutes, she livened up and gave lots of kissies-- my favorite scent… Continue

My Dad passed away this morning.

I am just destroyed. He was sick for the past couple of days and refused to go to the hospital. We finally got him to the doctor on Saturday. We just don't know what happened. It started out as a cold, but grew into a chest infection of some sort. I just wish I could have convinced him to go to the hospital. He was only 61 years old. I have lost my best friend. :_:

tigger is OBESSED with people. ANYONE new he MUST meet. it's kindof cute but i just wish he was that enthusiastic about meeting other dogs. at puppy class he sniffs aroufn for about 20 mins and then lays down in the middle of the floor....lol. kindof embarassing.

on another note we MIGHT be adopting Tiggers mom. =] I'm exciting but we're still waiting to hear back. I think it will be good for him to grow up with another dog given hes so shy around his own kind...maybe its because he… Continue

Sky, my Mini Australian Shepherd, has a propensity for needing veterinary attention. If there is an illness to catch, a disease to inherit, or an injury to get, he is there. I affectionally call him my "lemon" dog because everything seems to go wrong with him.

Well, Friday was his 1st birthday so he decide to go big (Sky never does anything halfway!). I had 3 kids over for the evening and we were letting the dogs out before we went to dinner. We were all standing on the patio and I… Continue

It's been nearly a week since I brought Teddy home. He's adjusting to life without his two sisters and mother. He has taken to his crate with ease and is doing fairly well on the potty training, only a handful of accidents. He's even made friends with one of my cats, little Miss Mooch. My other cat, B, is still a little bit nervous and unsure but he'll come around.

I'm having a lot of fun with him, learning about him and his little quirks, like how he tosses his bone into the air… Continue

Last night I got to watch my favorite episode of NCIS...of course the one with Corgis. The Medical Examiner's mother (they are British) has 4 Corgis. The Corgis get a lot of screen time and dialog about them. I love when Gibbs tells Tony that the dogs are not hounds "They're Corgis". Also the ME says that in Wales the Corgi is the protector of the farmer and in his house they protect his mother. The Corgis really make the episode for me.

A kitty get hit by a car. They didn't even brake. I saw it trying to get up but it was moving so wildly. The cars behind them at least avoided it. I had Hannah with me and was headed home. I keep thinking that I should have went to help it. I feel so terrible now. :(

Been awhile since I've been here.

No puppy yet, but I did get accepted to Penn State! I've been caught in a whirlwind since.

Simon had his first vet visit today. He did NOT like having his teeth checked or nails trimmed (screamed like a banshee the entire time), it was SO funny!

The vet says he's in great shape! And Simon pouted the entire way home, LOL! Can't wait to see what he does next week when he goes to get his next booster shot!

the other day we went to grandma's house for the day. i always love heading over there! i get to take a break from apartment living and run around like a mad dog in grandma's backyard with their dog, squeakers. we usually get along famously but this time it was different. squeakers was hanging out in the garage while i wanted to investigate outdoors. it was such a beautiful day, how can you want to stay in doors? anywho, mom thought it was a good idea to give me my breakfast out on the patio… Continue

Sorry it took soooo long to get these pictues posted, I knew I had at least 100 pictures of the corgi meetup, but it turns out when I went and put the pictures on cd the last two nights I ended up with 277 photos of the corgi meetup, lol. I really need to figure out how to make a living out of photography, I would be rich, lol.

I am so grateful to have my daughters help putting the pictures on the computer. I was trying to figure out the best way to put up… Continue

I met a breeder this past Sunday and today I go back to pick out my puppy. They were all too cute. If they had tails I would have sworn they were piglets. I forgot how sharp puppy teeth are too, I had raw knuckles after 5 minutes in the pen.

I am looking forward to being a corgi owner, toughing through the bad and loving the good.

Time to meet my brother for lunch. Have to wait until the breeder is home before the insanely long drive down… Continue 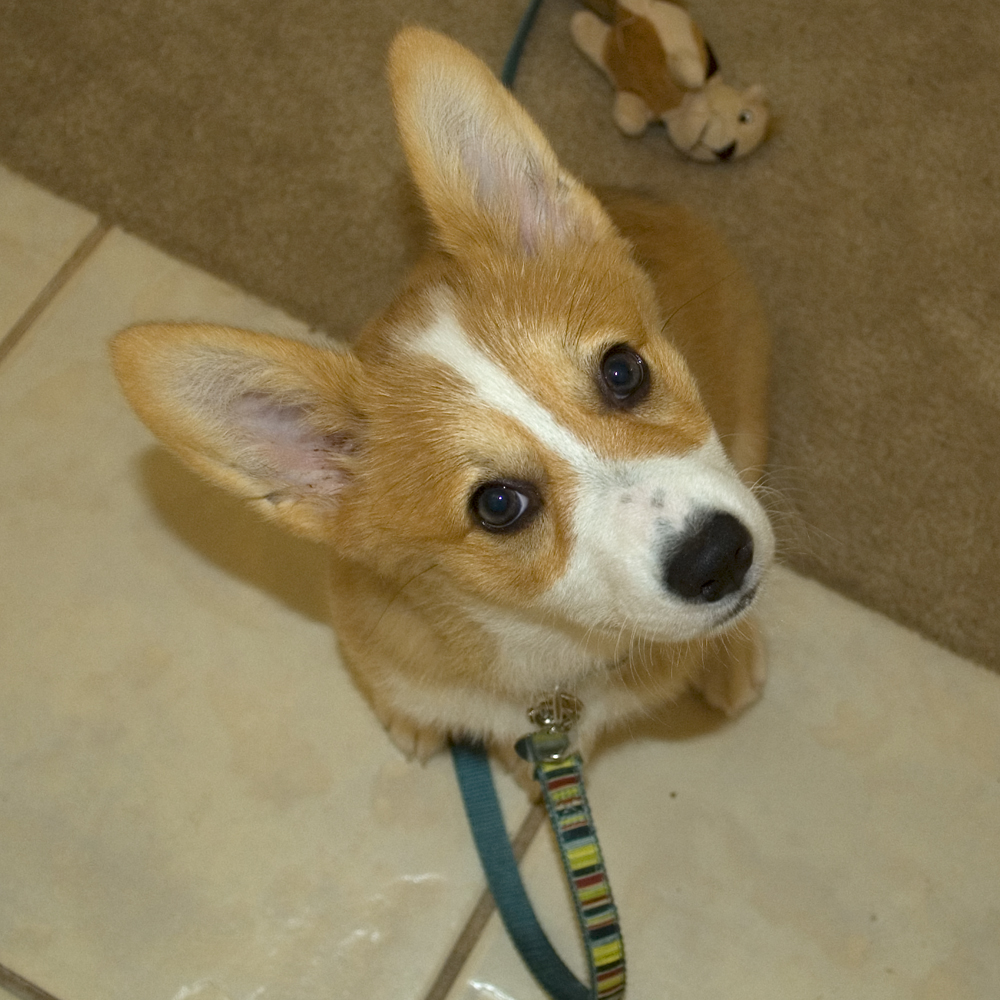 (adapted from "Tigger's Song" written by Richard M. Sherman and Robert B.… Continue

We finally brought Caly home on Monday. We were going good with the potty thing until last night when she decided to go on a futon mattress. I wasn't too upset cuz she had been using the potty pads fine until then... Well, she did it again twice tonight. Oh well. It's not as bad as an 8 week old pup so I guess I shouldn't complain.

She's definitely going to be my little velcro pup. It makes my husband sad cuz she seems to want to be around me more and almost seems afraid of him. I… Continue

So tonight was Lyla's first Puppy class. I debated for a while about whether or not to even sign her up for one, since I can teach all the commands at home for free, but eventually decided on it because Lyla is a little timid and could benefit from the socialization.

First night of class, we walk in, and Lyla's instructor reminds me of an older version of the dog trainer off of Marley and Me. Yikes! Sure enough, the first class was spent practicing alpha rollovers with the dogs. I… Continue

Hello mates, I got Kitty to post some new pictures of me. I think the pictures are ok, She said I was beautiful. Well I see that everyone is beautiful on MyCorgi.com!!! Enjoy em. Gwenie