Does your dog hunt? Does he dig? What dog doesn’t?
They all do. Is the woods around your house and kennels
damp or is there a pond or stream or any source of
moisture? Well, good grief, what woods isn’t? Are you
going to let your dog do what comes naturally for dogs to
do? Dig, that is. And why not, you may ask?
Well, here is a why not! BLASTOMYCOSIS!! And
just what is that that would kill a dog just for doing
what comes naturally. Blastomycosis is a… Continue

Matt and I took a bit of a mini break this week and we are still on it but since we are home and have some fun stories already.. I thought I would share! Owen had his first time away from us this last weekend. Matt and I went to Portland for the night and Owen stayed with my parents and their cat, Rusty. Owen apparently had a great time and had no seperation anxiety. That doesn't entirely shock me because he is quite the self assured little guy.

Before we left we went over to visit a… Continue

Bella is getting spayed on thursday

Bella has just turned 6 months, and I have been noticing signs that she might come on heat soon...so I urgently booked an appointment with the vet to get her spayed. Shame my poor little girl, I'm very nervous for her. I'm gonna do everything I can to make her feel better....she is definitely going to be spoilt rotten :-)

Crazy Lily~ She makes no sense!

We have a pond in the backyard. Lily has never gone for a swim in it, even during the hottest time of the summer. A cold front has moved into the area, and guess what? Lily went swimming. I could completely understand the need to swim in the summer, when it is hot, but why when it is 50 degrees out? All I can think is that perhaps she wanted to experiment. This is, to my knowledge, the first time that she has done this. Such a quirky puppy! She makes me smile so often. I just love her… Continue

On Saturday night, the AP miniseries "Dogs 101" profiled another group of breeds, and the PWC was one of them!

They did a good job of describing the history and notable characteristics of pems, and showed an array of cute corgi's. It was nice to see them get a minute of the spotlight!

We all go to Camp Dogwood!

Vacation is over and I'm finally recovered from it! My heavens! What a fun time we had. We did the "extended camp". That meant that we could check in on Thursday morning rather than Friday evening. We loaded up the car Wednesday morning. Luckily I'd bought a car top carrier or we wouldn't have had room for the dogs in the car because I seriously overpacked. But it was our first time at camp and I didn't know what we might need so I took everything but the kitchen sink. Packing was fun because… Continue

Non-profit programs such as Safe Place are quietly sprouting all over the country to ensure that critically or terminally ill people have one less stressor.

“Most people regard their pets as an important part of the family,” says Safe Place founder Joanne Bonicelli. “The peace of mind of knowing that this animal will be cared for is very significant.”

Some ill people have few relationships and therefore no alternative-care option for their animals; for various reasons,… Continue

i got back to michigan on wed. im temporarily at my moms house. chloe is doing a lot better with my moms dogs than i expected. we still keep then seperated, but now its just by a baby gate. she has met both the boys and was a little tense at first but is getting better. but the poor boys are a little frightned of her. its kinda funny because they are so huge and she is so little. the younger of the boys(bandit) hides everytime he sees her and hides behind me when he gets curious and wants to… Continue

Today at the Pooch Parade, lots of people said "what a big Corgi". I don't think they meant she was fat, but she is taller than other corgis I've seen. I've always liked her size and her height, she's not squaty. Oh well she'll always be super cute to me!

Nothing much going on

Well guys we are doing better. It is true that Time helps heal.I have been spending lots of time with my kitties and they are keeping me company. I have also been busy at work. I am still waiting on my Riley necklace whenever that comes I will put some photos on here. It is a good idea I think. If anyone is interested here is my webpage with photos of my kitties and some videos on there as well. Talk to you all soon.

It's been a hectic week, so I haven't been able to write this post. Last Friday, my boyfriend and I were in a car accident. It's the first crash I've ever been in, and I'm still reeling from it. We were in Maryland for Matt's brother's wedding, which was the next day, and for which Matt was the best man. We were going through one of those blinking intersections around 11 at night. We had the blinking yellow, and a pickup ran the blinking red. Matt barely had time to slam on his breaks before we… Continue

Wanted to share that I helped my dear rescue boy Zen cross the bridge on October 16. Zen arrived in my home in June 07 in horrible condition. Bless his heart I didnt even know where to start to try to bring this boy to some sort of reasonable health. The problems were many including severe hair loss, fungus infections of his ears and feet, he was deaf, had a misshapen ear due to an untreated hematoma, visually impaired probably due to chronic eye infections, a broken tail that was never tended… Continue

Dragster likes to play in pumpkins! 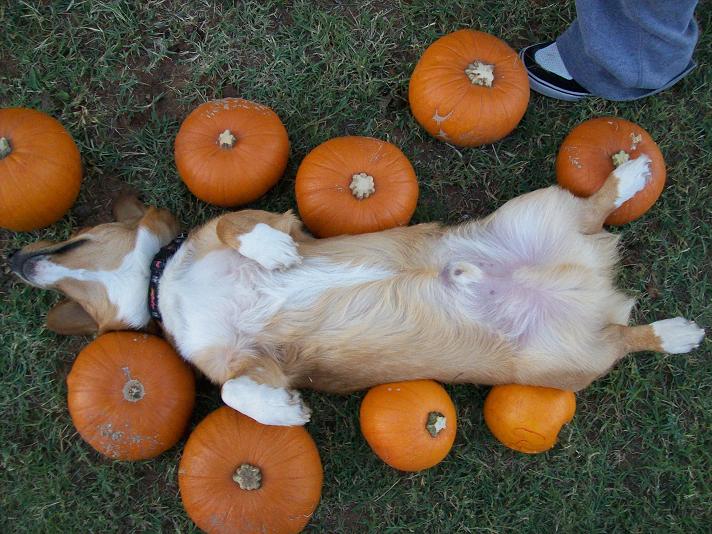 He's such a silly dog. I have a question.. Im looking for a place to take Dragster to show him/ let him herd/ or do the agility course. Any ideas where i can go?


Also, Dragster is full-blood AKC. but his breeder never sent me the papers. Any idea how i can get him registered?

Corgis to be Featured on Animal Planet Tomorrow!

I'm going to have to be honest and use the 'full disclosure' rule. My name is Grace and I work for Animal Planet. I stumbled across your blog while doing research for our show 'Dogs 101' and I have to say - what an awesome idea! It's a great one-stop-shop for all things Corgi.

We found a Halloween costume we just could not pass up. Two of my kids just worked as backstage crew for a local community theater production of "The Legend of Sleepy Hollow", so when we saw this online, we knew it would be perfect for Sidney. So this year he will be Daredevil, the mighty steed of the Hessian soldier otherwise known as the Headless Horseman! Bwa-ha-ha!… 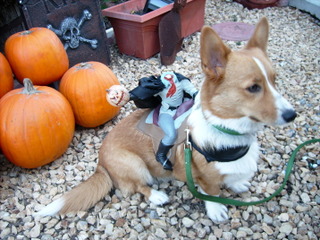 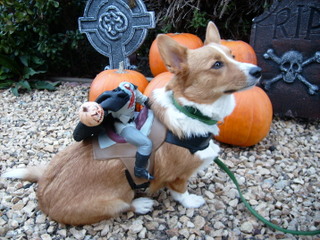 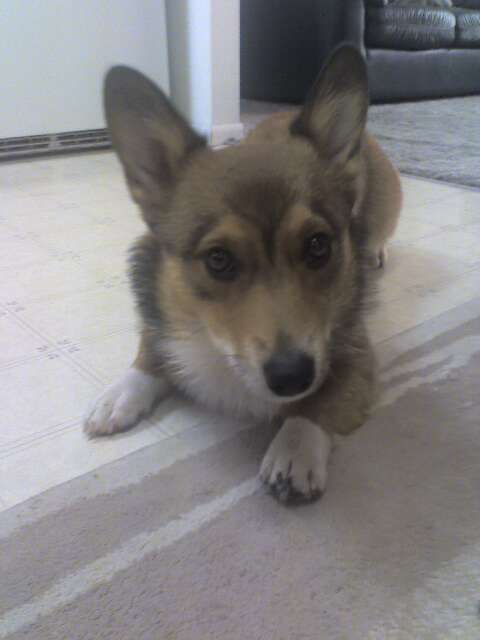 Can't believe our little baby is a year old already. He's such a good little boy, can't imagine not having him.

Well, the hubby and I have been packing up the beach shack in preparation for the big move to big D next week, and Penny is a bit of a loon. She was frightened of the flattened cardboard boxes at first and would not walk across them. Not wanting her to have any strange fears, we helped her over with treats and cuddles. We also helped her walk around the full boxes in the same fashion. However, we are now second guessing our training. She is not normally destructive unless she is playing with… Continue 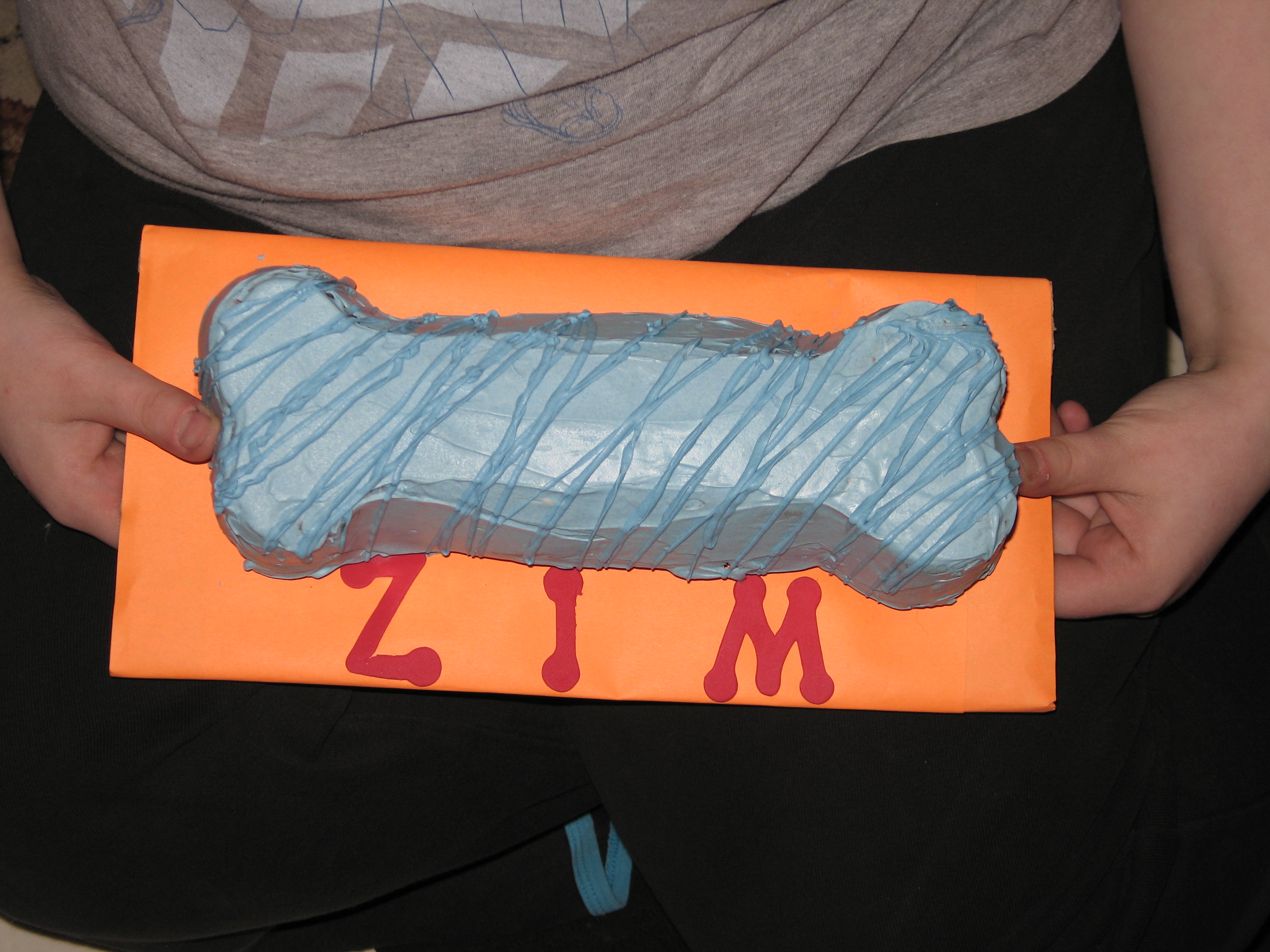 One year ago my Zim was born!! I can't even imagine not having him now. He is so wonderful. He got up this morning and celebrated by eating Gizmo's dog bed. After that we went and got his birthday cake that was made by the local dog store (they make their own treats, carry good dog food and toys...his favorite store- he LOVES them), picked out a new toy and came home to celebrate. He loved his cake (which he shared with his brother and Gizmo but he… Continue

So today Gonzo had his first visit with the vet, his tapeworms are completely gone! But he has earmites, poor baby. I hope they go away soon!

I found a new place, moving out of my parents house finally, getting a nice little 3-bedroom house with a couple friends, it has a backyard that's the perfect size for Gonzo, I'm stoked!

Charlie is on the beach. Outer Banks, North Carolina. 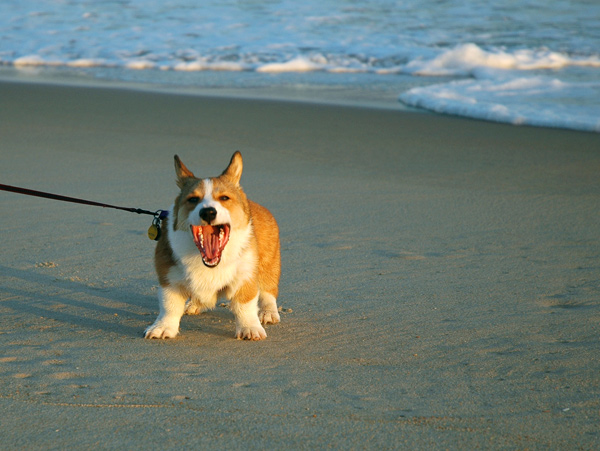