My husband is totally against giving the dog any table food. Lately, I've been giving Max our leftovers or what falls on the floor. I just don't like to see if go to waste. Does anyone think this is a bad idea? He's already starting to not eat his food so i don't give him a lot of table food. I'm just looking for some opinions.

Hey guys. I haven't been on here is quite a while but I felt the need to update how my doggies are doing.

So to start off last friday was Trevors second Rally competition. There were 16 dogs in the class. We were in Novice B. And guess what HE WON!!! This is the his second competiotion and this is his SECOND win. Thats right he won both. The other class was only out of three. But still he makes me such a proud parent considering i have completely taught him everything he knows by… Continue

Well, Caleb has grown so much. We got him at about five pounds, he's now about 14. He's also nearly completely housebroken. I only say nearly because he is still so young (a bit over 4 months) and I'm not going to saddle him with my expectations of being 'perfect'.
He was previously still doing very well. He could be left with run of the kitchen for hours with no accidents during the day, but somehow, for awhile he got it in his mind that it was 'ok' to wee and poo in the kitchen over… Continue

It has been a long time since I have had a computer working properly enough to really do much on here except check in and see what everyone is doing. Sorry for those of you I used to chat with more, wasn't trying to be rude but haven't had internet service since this summer so have been either bouncing off other peoples wireless (bad I know) or only been able to use my phone which is very limited on what I can do.
Let's see quick update on everyone......
KC is still Queen of the… Continue 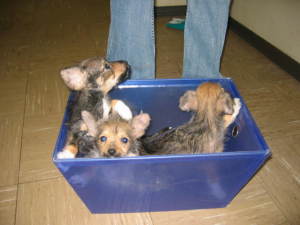 Looking for a corgi in colorado, south eastern wyoming, or nebraska

I am looking to add to my family and bring another corgi into my life. I am posting this blog on my corgi, because I have such a hard time looking on craigslist and other classified ads, because I feel sorry for all the other dogs and want to take them all home! I am hoping that I will be able to find one though the great folks on mycorgi. So if anyone knows of any inexpensive corgis in colorado or wyoming...maybe even parts of nebraska, please let me know!

Im just letting you all know whats going on with JD, he had to be rushed to Des Moines on saturday morning. His immune-system started attacking the red blood cells last Saturday. (The red blood count is suppose to be at a 32% and he was at a 6% when we got him in.) We took him to our normal vet in Pella, He thought that he had gotten a hold of something or ate something that he shouldnt have (he has done that before to). So we went all week with him just laying… Continue 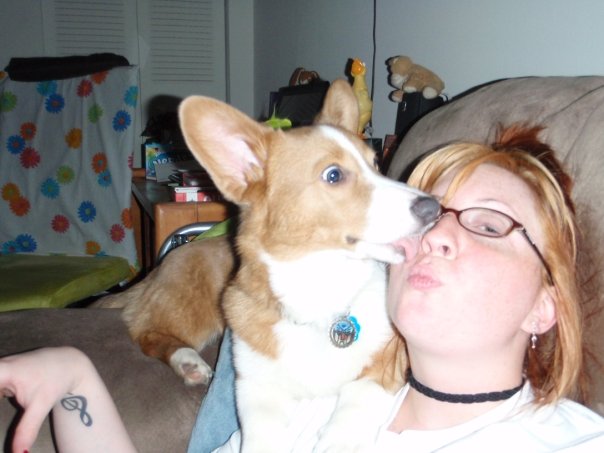 Today is Oppy's 1st birthday! It's amazing to see how far he's come since we first picked him up at 10 weeks old. He's getting a special doggie cake and a new bone later tonight. Unfortunately it'll be dark by the time both of us get home, so we can't take him to a park or anything (he had tons of excitement over the long weekend though and was totally crapped out last night when we finally got home). Hurray for getting… Continue

Yumi follows me EVERYWHERE I go, even if it's just to the next room. She hates being out of my sight and will whimper and whine unless she knows I'm gone in the car. This being said, Yumi followed me to the bathroom this morning. As I'm finishing up my morning business, I happen to glance down at her just as she lets out a tiny little fart! Now, I've never actually HEARD a dog fart before, it's usually an SBD (silent but deadly), lol, so this was already funny enough for me as the fart she let… Continue

So I decided to take my Pupsters for their first camping trip. Little did I know how much fun it would be. A girl I work with asked if I wanted to accompany her and her family for an outting in Sequoia National Park. Now how could I resist such a temptation. . .lol
The first night was marvelous, aside from the Bear that came into the campground. My friend and her family brought a couple of tents. . .well I decided I would rather sleep in my SUV since the back folds down… Continue

This is a neat idea for future dog owners : http://www.petcentric.com/Fun-Games/Friend-Fetcher.aspx?DCMP=EMC-PETC-PETC-Nov09_2

Three days from now I will be bringing my little Sydney home. It hardly seems real. For months I have been talking about her and looking at her pictures and videos endlessly. After all of this time it almost feels like I've been familiarizing myself with the idea of her, and once she arrives it will be another world.

Everything seems to be in order. Area rugs are up and stored, all small bits and wires have been secured and nothing chewable is at puppy height. Syd's crate is set up… Continue

What My Corgi Likes to Do

He likes to hide under furniture then reach out and touch people as they walk by... funny

and very playful. He isn't timid or anything. He knows this is his new home. I have video and picture that i will upload later. I am so happy with him, I couldn't have asked for a better pup!

We replaced carpeting with Wilsonart laminate, looks like hardwood. Chloe does not like it! She prefers her outside chair. We put a blanket on the floor until we can afford an area rug. My MIL Corgi also did not like the wood floor she put in. Chloe does have her own designated chair, but she does like this floor! Other Corgi parents have same issue?

A Thanksgiving toast to all our friends at MyCorgi.com

Corgis add a little something to everything in our lives. 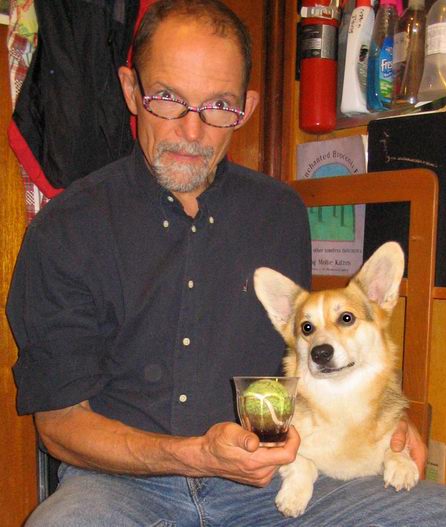 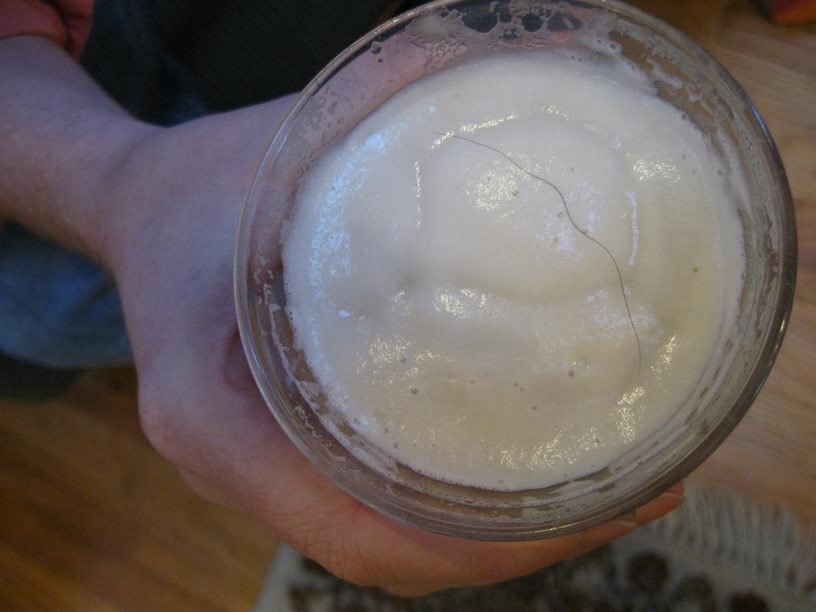 The winner gets $1,000 and a collection of dog toys from West Paw.

All tricks must be trained using positive reinforcement dog training.

And I was worried the tree would freak her out...

I put my Christmas tree up today, then sat down to enjoy some Thanksgiving leftovers, this is what I saw. 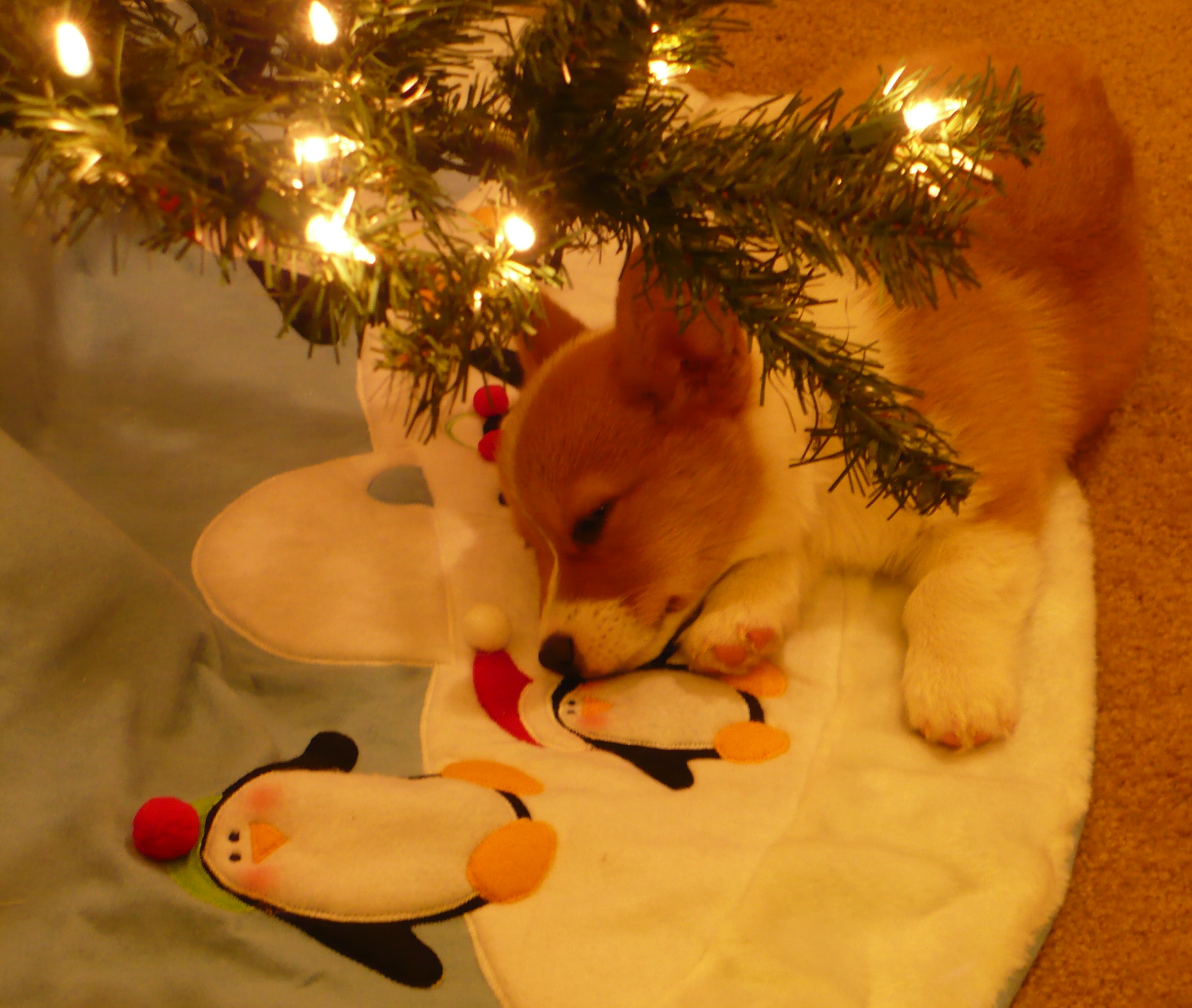