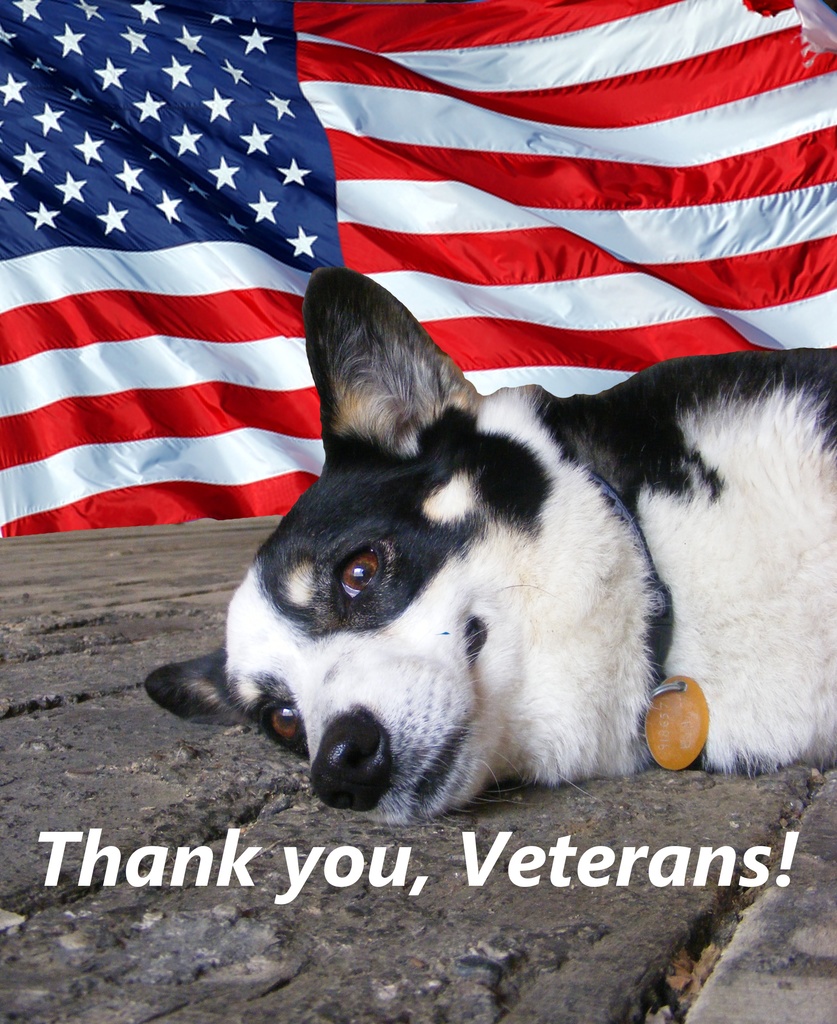 For the 1st time this morning, a week after we got Jase, Scout played with him! I was so happy since she is showing that she doesn't find him a total annoyance! Of course, my husband had to ruin it because scout opened her mouth and he yelled because he thought she was biting. (Again, human training is hard!). Jase has now gone ove r 48 hours without an accident in the house. He knows sit, look at me, and lay down. He is also a good boy and will sit for his dinner! He does have one bad habit.… Continue 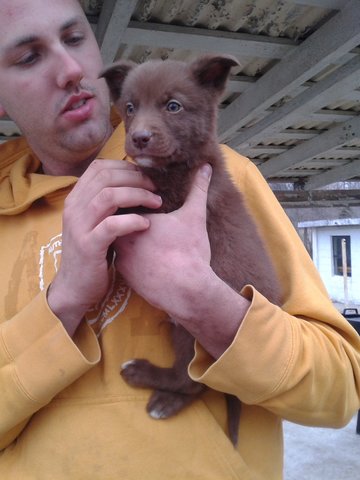 He's not a corgi, but he's cute!  Our local humane society had a litter of mostly Australian Shepherds (mom is pure Aussie) come in, and Jeremy made the decision that he wanted one of them, and I like that we got to rescue someone who will already be neutered and have 1st vaccinations.  His birthday is October 21st, so he is 11 weeks old.  He will get fixed tomorrow… Look who is at a shelter only an hour from me!!!! I already emailed all my details and called them as soon as I saw him.  He isn't available until Jan 6th, and may still have someone claim him, but crossing my fingers that I will be able to do the honorable thing and adopt this guy.  I will keep you all… 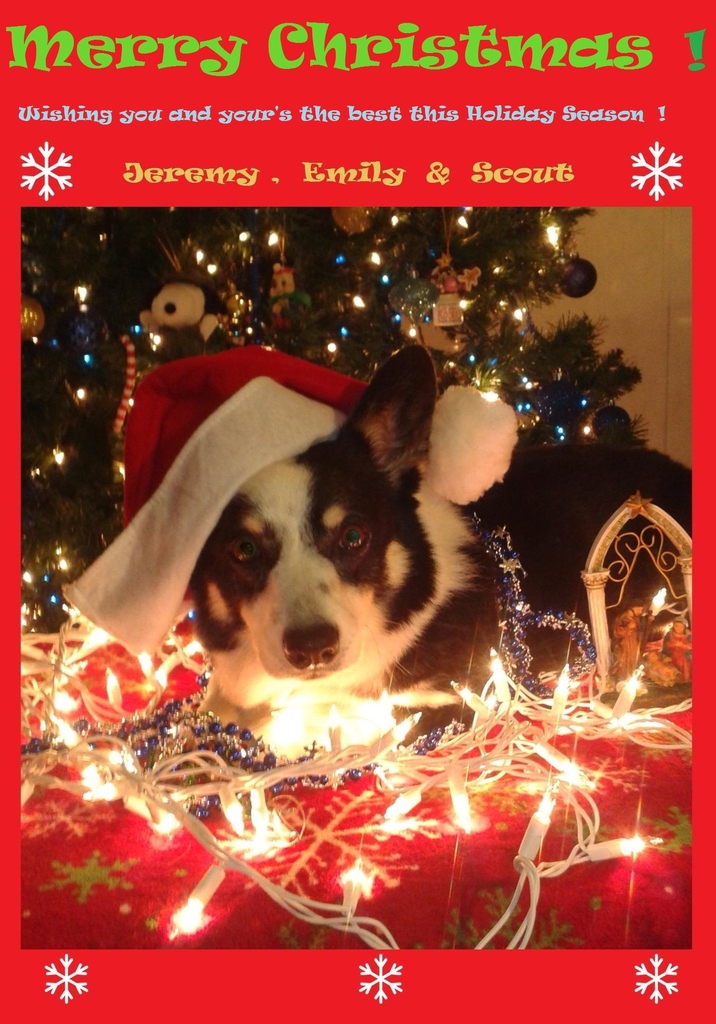 Well, I am now on a tentative waiting list for a corgi!  Tentative because I am not sure if I am getting one from this particular litter.  I will eventually get one from this breeder though!  Since I am on the list, I can get picture updates and know when the puppies arrive.  They are due early January.

They only have two female corgis (and one is too young to breed yet) and they breed for temperament and conformation.  They also breed Aussies.

They do not show, but the dogs…

My second dog, Hershi is not doing well at all. She can't stand and doesn't want to eat. Mom called me and made a vet appointment for tomorrow. So if the time is not today or tonight she will be on her way to rainbow bridge tomorrow morning. Kinda glad mom picked today to tell me because I am home from work and can hug Scout extra close all day. Prayers for a comfortable last few hours appreciated.

Who watched the O

We signed for our house on Friday, and pretty much spent our whole weekend out there with Scout (minus sleeping, as furniture is still at the apartment).

Scout is taking the move as expected, easily.  Pretty much I am the only thing she needs, and as long as she knows she has me, she is fine with any changes.  We had to leave her in the house while we ran to town, and I was going to lock her in the bathroom, but she didn't want to go in.  So she stayed in the main part of the house. …

Scout went to stay with her human aunt while Jeremy and I go on vacation.  Glad we are leaving early tomorrow, because it was so sad coming home and not having a happy smiling corgi waiting at the top of the stairs. Yeah, Marley the cat is here but a cat just isn't the same.  He loved me when his bowl was empty, but I fed him and now he has slinked off to a different room.  My corgi would have eaten, then resumed her position at my side.  This gives me even more reason to get a puppy within…

So, you all need to go search online for "IKEA Corgi Dog". You will love it. They came out with a Corgi hot dog holder for the diamond jubilee. My question: are they in the US, too? I NEED one! Have …

So, you all need to go search online for "IKEA Corgi Dog". You will love it. They came out with a Corgi hot dog holder for the diamond jubilee. My question: are they in the US, too? I NEED one!
Have a good weekend! Continue

Wait is almost over!

This really doesn't have much to do with corgis, but I felt like writing something today.

We will be able to move into the house we are buying in probably around 2 weeks!  This is so exciting, since I decided no puppy until we have the house and a fenced in area.  The first project will be a deck out back looking toward the woods, then we will get some sort of small decorative fence for part of the yard.

This is in the blog section b/c it's not a huge concern or a problem, just something I noticed:

Do you ever notice that your corgi sheds most in certain areas?  Scout sheds most at the top of her hind legs / hip area.  If it wasn't for that area, she would prob only shed 1/3 as much.

She got a bath and brushing yesterday (starting to get that corn chip smell...wierd but true) and I had plenty of time to think about it while I was brushing (a good 1/2 hour or more)  Neighbors…

No puppy yet. Last night, I took Scout to the grocery store with me to pick up a couple things.  And sitting outside the store was a dad, his son, and a corgi!

Of course, I turned into crazy corgi lady and got way too excited.  He was a little under a year old, hadn't filled out all the way, and ALL EARS!  His name is Tank, and they live only a couple of blocks from where I do now!  I got Scout out of the car and they got along awesome!  Tank wanted to play more than Scout liked, but…

I went up north wedding dress shopping with friends this weekend (Fri, Sat, Sun) and left Scout at Jeremy's apartment.  I was glad to be able to do this since he just got his landlord's approval that she was allowed to stay.  Well, I got a funny report when I got back last night:

She was perfect Friday night, then he had to work 1/2 day Saturday.  Came home to her happily sleeping in his bed (which is probably too high off the ground for her, but with no supervision, she figured that…

OK.  Has anyone else notice their corgi doing this:

I took Scout to work the past 2 days.  Today, we took a walk down to the railroad tracks near work and walked a little way on them.  Somehow, she knew how to easily travel the steps with a corgi - hop.  She puts her front 2 feet on 1 rail, jumps, and her back feet land perfectly on the same rail while her front hop to the next. Repeat as needed.  She was able to easily keep up with me this way. Seems she doesn't want to walk on the…

(Already announced this on the facebook mycorgi page, but I'm bored at work now so I'm sharing again.:)

I had been going out with my boyfriend a few months last Thursday Dec 1st.  Well, he came to my place last night and I cooked dinner.  Had to call Dish Network b/c my TV wasn't working.  Well, got that taken care of while dinner was cooking so we could watch a show together.

I got dinner cooked and went to the living room and Scout was kinda wound up.  So Jeremy was playing…

Exactly a year ago today (the Wednesday before Thanksgiving) I found out I was getting my first Corgi, Scout!  My friend at work said I could come get her from the neighbor any time.  Well, I decided to wait until after the weekend to get her since I was traveling and didn't want to take her on a long car ride first thing.  Then, I decided to wait until Friday so I would have a weekend to get to know her before I had to work.  So on December 3rd, I drove and picked up my dirty flea-filled…

Did anyone catch Jeopardy last night? They had a corgi category!  For some reason, I don't get it on any of my stations, so my mom called when they got to the  category and asked me all the questions.  Anyway, just wondered if anyone else was excited that corgis got yet another publicity boost

I am home today with Scout for election day.  The weather is awesome, so we are probably going to head out to Rural King, then go to the lake a little later.  Have a good day everyone!