Hello, everyone!
I finally took the time to get back on the site. As several of you may know I recently brought home my new baby~ Desmond. Our family has been very pre-occupied spending time getting to know him and setting up our routine. He is fantastic!! He is soooo smart. He already knows "sit", "down", "stay" "leave it", "get in your bed", "come", and of course "no". He walks wonderfully on the leash. Not to brag or anything but he is already too advanced for Puppy Kindergarten so we… Continue

ok ok... so it has been a while since i have been on, but i have been super busy with work, the husband, house duties, and of course the corgis, but i wanted share that I recently adopted a pure breed maltese puppy from a human society down here, he is the cutest thing my little snowball, but there is only a small downside, he is complete blind, yet he is only 7 weeks old and full of energy. I am looking for any advice or tips on how to make things easier for him, he is very smart as it is, but… Continue

She bit her brother Ein in the eye. Thank God it only tore the eyelid. She's back on the "zac" wagon. Food aggressions are naughty. She didn't get to have dinner then. Phoenix says missing dinner are the worstest punishment evers!!!! She's all jealous cause now she has go through all the "sit", "down", "wait" and "chowtime" commands just like when she was younger but her brother doesn't. No fairs.

Oh she knows I'm talking about her. She's trying to help me post with her nose.

Westminster wanna be, in Eureka, CA 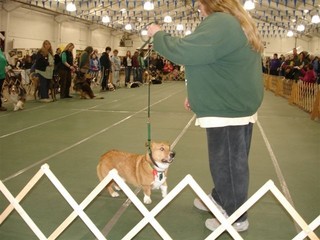 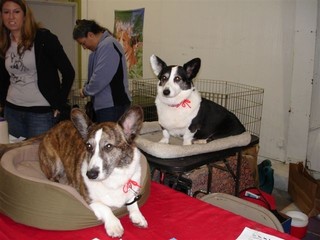 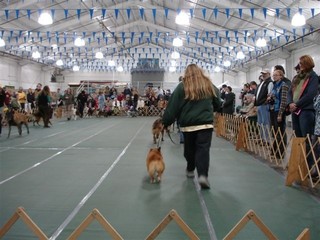 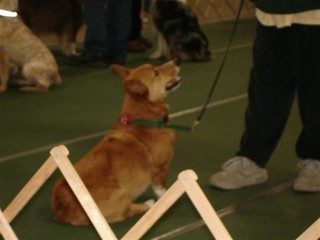 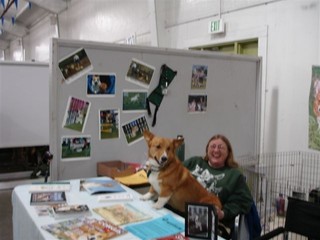 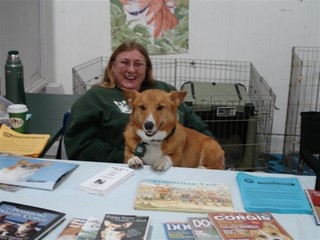 On Sunday the 16th of Feb., HUMDOG (Humboldt Dog Obedience Group) held a Dog Expo in Eureka, CA. The purpose was to educate and inform members of the general public about the various breeds of dogs and also give… Continue

Here are a couple pics of our little guy. We pick him up on March 14th!! 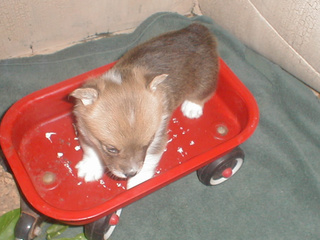 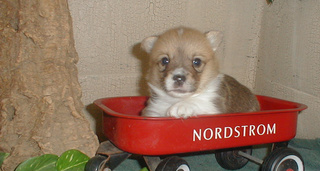 Finally no rain. Jake was not pleased with having to go out in torrential rain. He was very good, though, went out and did his business and then ran for the door. R took him for a short walk as well. He wanted to go for a walk after dinnre but I had to tell him no as it was pouring again. Had to settle for an evening of hugs, and playing with toys.

This morning was much better, he went out happily. He is starting to understand words such as "potty" so he knows when we tell him to go… Continue

Lincoln is all tuckered out ...

He went for a nice long walk this morning ... he needed to stretch his legs a bit I would say.

I am sitting on the couch doing hw and i see him slowly drop his head and let it hang there with his eyes half shut. Next thing I hear ... him snoring! He looks so innocent for some reason. He is probably dreaming of ways to torture us later.

I have never heard him snore before. I have to move but I am afraid to make noise cause I don't want to wake him.

We are having a wet day including a skylight leaking...so, no long walks for today! Jake is doing well with his housebreaking and barked to go out in the morning. Thankfully, he is not a morning Corgi, so I can get ready for work and he sleeps until someone else is up. The afternoon fun is limited to Jolly Ball rolling in the family room. Tomorrow should be a much better if colder day, so at least he can go out and play with his new friend, Dennis, the Rott mix in the next yard over. They can… Continue

Corgi Party : Terror at the Park

We took Brynn to the Corgi meet on Saturday and it was interesting ... There were so many other corgis there , around 25 , and it was a bit overwhelming . I was in Corgi Heaven !! Brynn was worried from the get go .She let a few dogs sniff her and was doing fine while on leash , but when we let her go , a group of other Corgis ran after her and pinned her down . Brynn started to cry out so i went to get her and more dogs came and she ran and we were all trying to grab her so they wouldn't… Continue

Rhett and the Bar Exam :P

I'm currently studying to attempt (and I do mean attempt) to pass the Virginia Bar Exam next week. So the first time I have ever had to leave Rhett since I got him was last weekend. Thankfully I'm blessed with not having to board him -- but just having my Aunt puppy-sit. It went very well, with him whimpering after me only the day I left. Not that he wasn't happy to see me last night, and I was thrilled to see my little man! 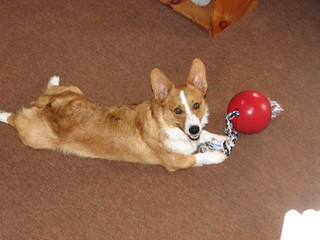 Jake had a busy day today. He discovered his Jolly Ball and found it very intriguing. He also went to the beach for the first time e-vuh. Apparently, he found the waves a bit alarming and ran from them, but the sand was way fun and the seagulls worthy of herding. So much to discover! And then home to play soccer with my daughter and her boyfriend.

We have a tired boy in his bed now. But, he had a lot of fun...and tomorrow is rain, so… Continue

Hi everyone, I thought I'd let you know how I like the Nature's Recipe dog food I've been eating. It's a pretty good flavor, I usually eat my two meals a day and don't usually skip any meals. My coat has been very soft and shiny since eating this food. Everyone is always giving me compliments.
I must have eaten something bad a couple of days ago, because I threw up Friday night and have been having very bad diarrhea ever since. My mom is preparing a special diet for me now. She is working… Continue

Finally, after a long few weeks of agnoy and worries, Rambo is finally walking. He's been doing so well when the weather has became just in time to be so sunny for walks. I am so proud of his growth and learning abilities I can hardly wait to see what kind of tricks he will be learning.

We went to the beach yesterday and saw a lot of dogs too! I think Rambo is going to be one of those happy dogs at the beaches just when summer is around the corner. :D

Good day yesterday. Lots and lots of walks and play time. We had one small incident of growling, so R put him firmly on the floor, said no and gave him a time out.

He is drinking his water now and quite regularly. No accidents-yet. He is a bit afraid of the yard still, so I go out with him or wait at the door. One thing that helps is that the Rott mix in the back is out in his yard and Jake gets very excited and starts to run. The other dog is very friendly and gets excited, so they… Continue

This year's Valentine's Day was a good one for Maddie and me. Maddie got a new toy (a pink bear) and I got the dog from the Hallmark-Valentine's-commercial that begs for a hug and barks. It's sooo cute! Speaking of cute, here's a pic of Maddie with her Valentine's collar-cover and ear-bows: 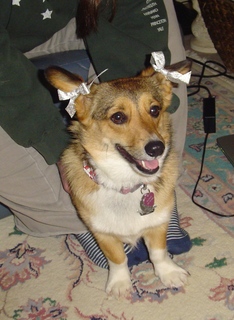 I just can't get over how adorable she… Continue 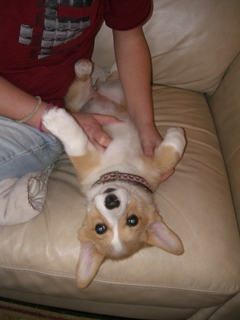 I've had Ginny now for a month, which is really hard to believe. She seems to be getting bigger every day. She's 13 weeks old now. Life with puppy has been both rewarding and challenging, but I feel such a bond with my little girl and I just love her expressive face. I've been working so hard to really socialize her to different people and environments because my hope is to have a friendly, loving and well-behaved companion who is great in all sorts… Continue

In the Winter months where do you take your Corgi for exercise?

When it is too bitter outside or the weather is nasty where do you all take your Corgi for exercise?

I want to find, if there is such a thing, as an indoor dog park. It would be great to be able to get him out running on those not so nice days.

Until I find that perfect place please share your ideas and suggestions?

I'm all a flutter!

It may only be a week but sometime tonight Roxi and her daddy are showing up for a week :)

My only worry is Ms. Apex her "sister" my brother's husky. (My mom started the whole family naming system for pets.. we grew up with it.. so aka my brother is Roxi's uncle.. and so on.) She's gotten a lot better and we've introduced her with other dogs so I felt it was finally ok for Roxi to stay for a while. I wanted to be sure since once they were down here there were no safe places to bring… Continue 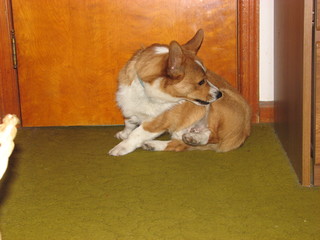 We had a bath this morning. And we are happily lapping up water, so that is a good thing. And a very long snooze with my daughter in her bed. Such is life. I guess he may decide to keep us...

My baby girl and I are going to my first Corgi meet -up this morning ! Can't wait to see all the other Corgis ,and how Brynn interacts :)) Bringing my camera and will report back .
Hope everyone has a fantastic weekend !!!
Brian and Brynn