I'm a little late in the game with this, my most recent blog post. Yesterday was an absolute awesome day for the little Cheez-doodle (Cheez-it). We started the morning with no fuss, took to the outside demonstrating gracefull leash control. I started "treating" after "potty" first thing. After the business was done, we went on a short little walk around a couple of houses. (Mabye 1/8th of a mile, but the farthest he has ever been). I think he took it as a treat for going potty so quickly… Continue

Oh why do you hate me, haughty training dog?

You live across the street and are generally well behaved.

Why do you go rabid when you see me?

Is it my ears?

Is it my legs?

Is it my swerthy British Accent?

Most likely it is just my pure AWESOMENESS.

my little annie is potty trained and doing really good at it. the only problem is she wont tell me she has to go outside to do her business. I watch her closely and I seem to have it down pretty good with the clues she is leaving me that she needs to go out. She jumps in my lap or beside me and just looks at with those beautiful eyes but she says nothing she just looks at me. She is just way to funny. I am trying to make a game out of it when I ask her if she needs to go outside. Arty the 2yr… Continue

My Corgi is going under the knife

And I'm a bit nervous. This coming Friday my corgi pup, Agro, is scheduled to be neutered. I'm a bit worried for the little guy simply because I don't want him to feel any pain. I know dogs get neutered all the time w/o any real complications. I mean, I might expect some suture rupture or infection but I know he'll ultimately be fine. I just hate having to anticipate and later deal with my corgi having to suffer. My partner and I debated whether his pain was ultimately worth him being neutered.… Continue

Lincoln has regressed yet again on his potty training. We have no idea what to do. We started the bell training a couple weeks ago and it has worked perfectly. Now he goes potty inside then rings the bell. I am confused.

Sometimes he will ring the bell and we take him out and we walk and stop for potty breaks. He doesn't do anything. We are out for probably 20-30 minutes. We come inside and I turn around he pottied in the house. 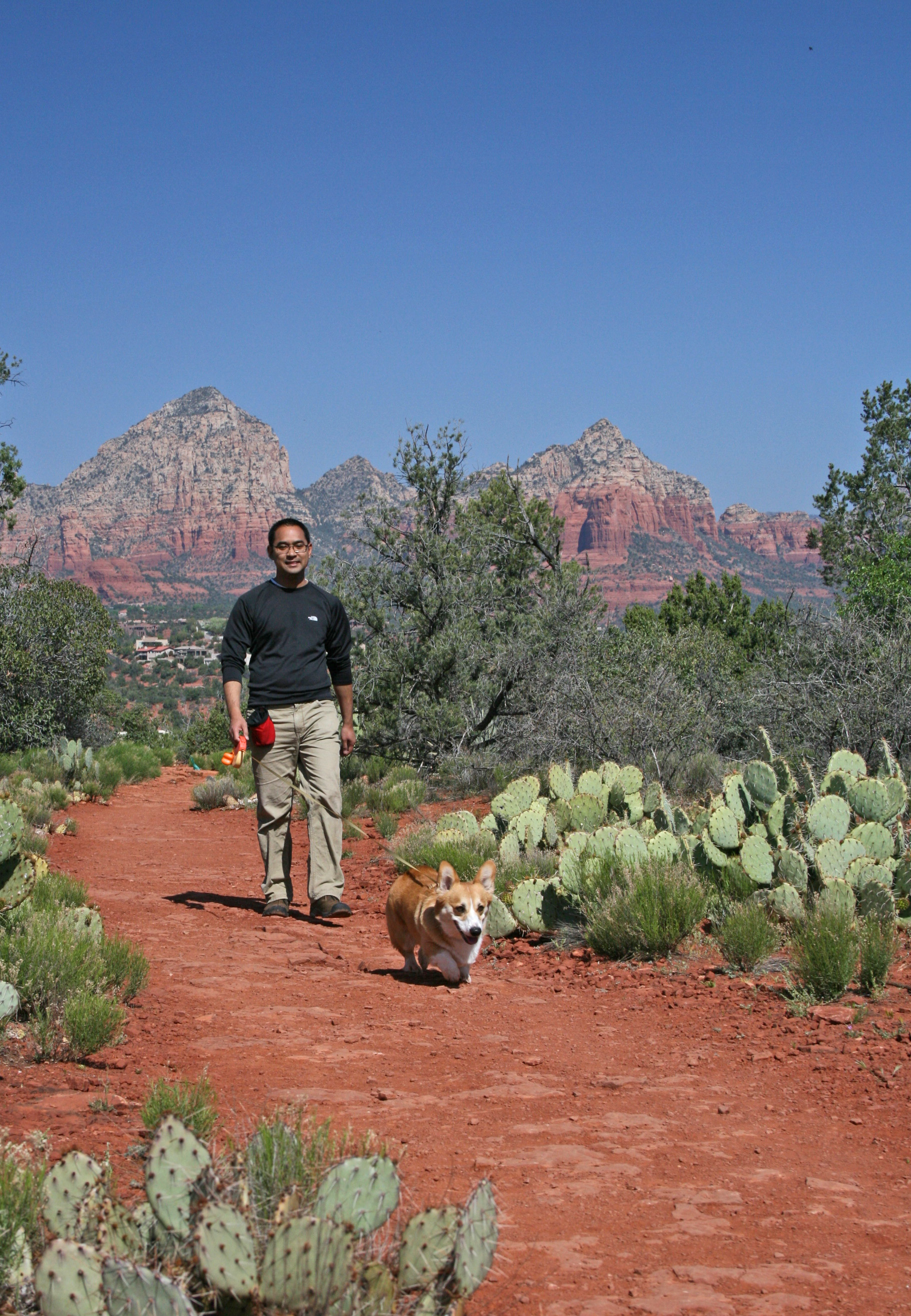 Thanks to all of you who have imparted great advices on us before we left for this trip! We had a great time with Bryson, driving all the way from California through Sedona, AZ to Austin, TX (well, the driving part wasn't so fun, just the non-driving parts :P).

Sedona has a lot of dog-friendly shops, Bryson is welcomed almost universally (and everyone has a biscuit for him!). But we were disappointed that with all… Continue

My girls are the joy of our lifes. Arty is our quiet one and Annie is our little fireball. They keep us laughing and I cant tell you how many hours of joy we get out of them. Spoiled is a good word to use with my girls but with faces like that we could never say NO to them. Every time I take Annie to the Vet she calls her trouble and I have no idea why. She's not trouble she is a love. I haven't gotten the girls fixed yet but am thinking about it. I don't know if it is a good idea or not. Maybe… Continue

Not so, says Rolo!

He returned from the vet Friday afternoon, neutered and very woozy. We spent the afternoon together curled up on the couch with him licking my knees, fingers, anything within reach. He hasn't seemed to be in any pain, but I have been administering his little puppy pill every 12 hours as our vet said. No problem with him licking the incision site... he can't reach it anyway. heh.

I was online www.petfinder.com just looking around, (because I really don't want to do laundry). Anyway I found that TAPS a no kill shelter in Pekin has a corgi in their care who is Heartworm positive. On their site they are asking for donations to help with his treatment. He is a very cute little guy, 7 years old. I thought I would put it out there to see if anyone would like to send help. 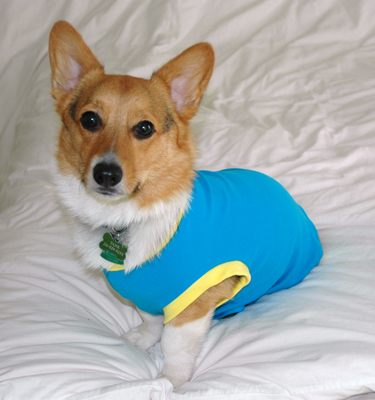 www.Corgiclothes.com has added new colors just in time for summer as well as a larger size. Check under the tank top sections for our new products!

My husband & I just had to take a tick out of poor little Lola!! The thing was huge!! I'm guessing it was from camping last weekend... Poor baby! The thing was pretty good sized, but we got it out all the way, but I was wondering if there's anything else we need to do besides cleaning the area (plus we gave her a much needed bath afterwards). Should we be calling the vet for meds or something??? She's on Sentinel, but it doesn't cover ticks... any advice would be great.

LONG visit and the puppies at last!

Well, we went on Sunday afternoon and spent 2 hours with them all. We have narrowed it down to three. I know...too many to choose from! They were all so adorable and so happy. My boys were in totally heaven. Outside we went and played and played. I took 10 million digtal photos and still can't decide!

Based on temperment they were all great! No one freaked when gently rolled on their backs (except one which was immediately eliminated) and they were all fine having their toes played… Continue

I really wanted to thank the folks who mentioned the World of Disney movie "Little Dog Lost" on this board! I searched and finally found and ordered a copy. It arrived this week, and my husband, daughter and I watched it Sunday evening. From the opening sequence (which instantly transported my husband and I back to our childhoods) to the closing credits it was a wonderful journey! I had forgotten how good those old movies could be. I was completely into the story ("No Candy, go back!") and that… Continue

Able to Walk and Name

I have decided to stick with mythology and I think I am going to name my corgi Thor, it seems like a fun name for a dog and is short and easy. He is just able to stand up on all fours now and is getting pretty inquisitive. I went to see him at the breeder's home today, and he is a really loveable dog already. I think he's going to be just the pet I've wanted since my previous dog, Jack, died a few years ago. He was my pet and companion through childhood, and lived to be 18 years old, and since… Continue

Today, cheez-it was a little terror. He suddenly developed a taste for shoes. I walked him around the house with his leash on, I sort of held im next to me in the heal position to stop him from eating the leash. He is doing alright with the leash, but he absolutely refuses to use the bathroom while it is attached. Our first and last leash-walk began after he pee'd in the usual spot in my living room, and ended with me reeling him in like a Marlin, fishy movements and all. This is when I noticed… Continue

Sitting in the front seat of the car?

This may well have been visited before, but I am trying to do the right thing, by getting some opinions.
I have a Volvo wagen. In the front the seats are separate with an arm rest in the middle.
Court likes to try to sit in my lap and look out the window, or have his hind legs on the
back seat and his front paws on the arm rest, of course during turns etc, he may lose his
footing....I bought a seat beat/leash for him: it's a leash that has a seat belt insert, that… Continue

Kenzie and I started our first Fly Ball class today!

Lucky for US, we were the only ones there! Hahaha..
Something about people being in California?

I really think I picked the jack pot for her out of dog sports in regards to her personality.
She climbed on the Fly Ball Box like it was a jungle gym and wagged her tail when it clicked.

I thought she might be scared of the strange object or at least the noise. Nope.
She already knows how to jump… Continue

Whenever I drive, Rambo likes to sit half way in my lap in the driver's seat. As he's close to me, he often look at me and opens his mouth. I noticed how bad his breathe has been lately. Is there such thing as breathe mints for dogs?

This weekend I took Sidney and Bruce to the hugest corgi play date I have ever seen! Here in San Diego we have a Corgi Meet-up group, and once a month they get together at various dog parks or beaches. This was the first one I was able to go to, and it was so much fun. There were 60 corgis and corgi mixes there! The funniest thing was when a "herd" of corgis would break out in a chase! Sidney got to be lead dog in a couple of chases, and boy is he fast! We saw cardigans too, though the vast… Continue