I love my pup!

So today was my birthday and i had as blast.. Ace was the best darn little guy while we were out at a parade thinger LOL

he behaived so well and we ran into about 4-5 other Corgis while we were there and Ace was like OH BOY YOU LOOK LIKE ME!!! lol it was so cute! I bought him an adorible little shirt though i have to fix it up for him cuz he pottied on it EW lol
Also Im so proud of him because he wasnt jumping on people and didnt steal food and left food that was…
Continue

Eh my Birthday is tomorrow (19th) and im starting to get this gut fweeling it isnt gonna be great... But im staying possitive... I just Gave Ace a bath so the pride parade im going to he will be all nice and clean... so far so good he is smelling good and clean as a whistle LOL then tomorrow its off for an early morning... ugh... i hate being rushed for other people.. its no fun... and its giving me this gut feeling my birthday is gonna be aweful LOL... Oh well I get to flaunt Ace around thats… Continue

It is Chloe's Birthday today!

Today my girl Chloe is 2 today. I cannot express how important she is to me. Since the animal food danger recalls I carefully look at all packages to see where the products were totmade and what they contain.

We are having a great time doing agility-totally out of character for me, but for the love of Chloe I do it.

These are some fun little "status" things I found a Facebook App I use called Status Shuffle. I thought these ones were corgi appropriate lol. a home is not a home without dog hair Be the kind of p…

These are some fun little "status" things I found a Facebook App I use called Status Shuffle.
I thought these ones were corgi appropriate lol.
a home is not a home without dog hair
Be the kind of person your dog thinks you are
Who needs NASCAR when you have dogs to watch race around the house?
You love your pets too much when you talk to them and call them your…
Continue


Mine is definitely not summer. Why? My kitchen floor looks like a barber shop on a Sunday. There is no corner left untouched by corgi hair. I sweep, they walk through, and you would never know I picked up a broom. I swear, we brush enough dog hair this time of year to soak up the entire oil spill in the gulf and then some.…

Meeting all the Animals on the Ranch

We have a batch of Kittens that were born on April 20 the same day as Tallula, and It's so funny to watch them play. Lula loves to run and bounce on them and treats them like her personal chew toy. The funny thing is the Kittens don't care They are such a distraction when we go out to go potty. They hear the front door open and they come running ready to play and roll around. They even go in her doggie run and hang out.

Levi is my Sister's dog that we are keeping for awhile. He's a…

I'm enlisting you all to vote for Orion in the 1800 pet meds cutest pet contest :)
http://contest.1800petmeds.com/index.htm?id=7930
There's the link and if you think he's cute (and you better! :P ) then please take the time to vote
Thanks!

I was lucky enough to stumble upon the movie based on Dr. Temple Grandin's life on HBO today. As a teacher, I have always been fascinated by autism and its varying degrees of brilliance vs. disability and this movie appealed to me on so many levels.
Claire Danes if fantastic in her portrayal of Grandin and the content of the movie along with Grandin's understanding of animals is totally engaging.
She has written many books, but one that I am…
Continue

When I moved out to Arizona I was so home sick and I missed my Basset Hound back home! I just needed a dog. We were so broke it wasn't even funny. but my husband Found the perfect little guy! We were so lucky! Stump my Pembroke Tri colored Corgi! Came to us Back in September! hes 11 months old and i couldn't have asked or recieved a better dog! Hes the more perfect little thing and my life would be nothing with out him.. He changed my life when i was depressed and Stressed.. and now as our…

This is the time of year for some of us to start watching for Foxtail grass (sometimes called "barley grass") and Cheatgrass, our little 4-legged pals are in "danger" of picking up these nasty seed heads!!!! We have these grasses in Washington, Oregon and California...I don't know about the rest of you. I have googled these grasses and found pictures...you could also check with your vet. WDJ has in the past had an article on this subject (several years…

At the Yakima Valley Dog Show on June 6th, in the pouring rain, Ashton got his final leg in Rally Novice! Woo Hoo! It wasn't the cleanest run (score of 86) but he qualified. Poor guy, every time he tried to look up at John he would get rain in his eyes and ears making it hard to concentrate.

This past weekend Ashton helped raise money for the Adams County Pet Rescue by giving his first off-lead Rally Advanced demonstration. We are so proud. Despite all the people, dogs, food and other… Continue

Birthday is closin in!

So tomorrow my friends are coming to kidnap me for a weekend of hellacious fun! LOL

Speaking of Ace... I was looking on puppyfind.com last night -like i tend to do alot- and i was blown away to seeing Ace's biological mom for sale... im dropping subtle hints here and there... but i doubt we will get her...

Blind Dog Has Her Own Seeing-Eye Dog

PLEASE VOTE FOR ME AS CUTEST PET!!

My bags are packed...I'm ready to go!

For the last 4 months We have had the opportunity to share our lives with this wonderful guy! He will be leaving soon for his new furever home! We will miss you (well maybe not Wynn). He will have a great life with his new family! Any guesses? 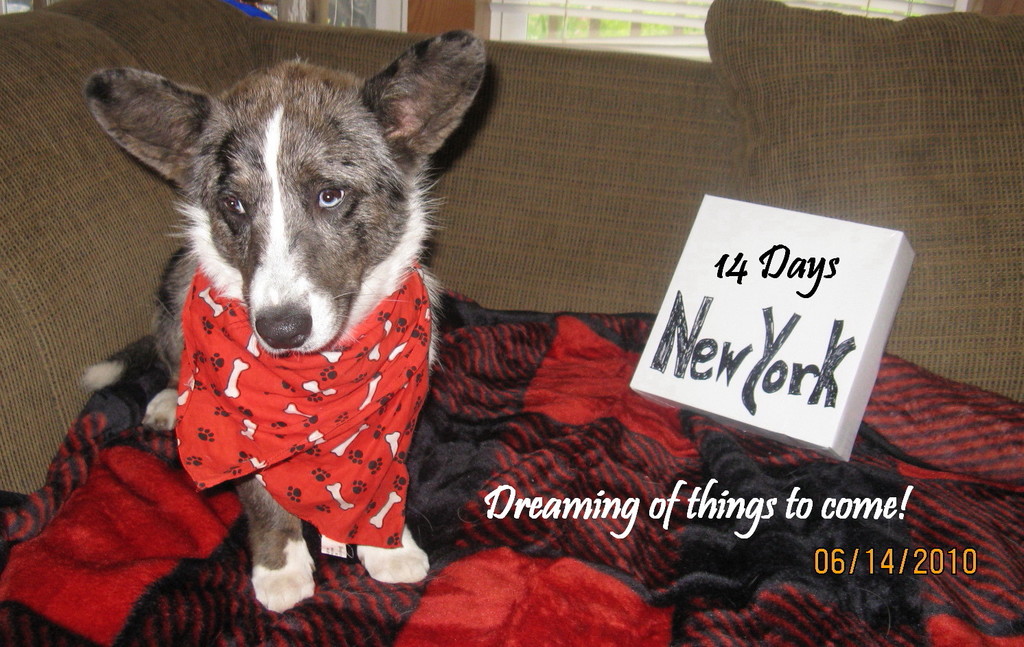 Tonight we introduced Rocky to Pixel for the first time. Aside from some food issues, the meeting went well. I will be monitoring (closely) who gets what food, treats, and other choice items for a while.
I can't say how cute it was to see Pixel frap for Rocky. Rocky didn't frap for me for the longest time, so I was surprised to see her doing a clumsy little puppy frap. I will try to take a video in the next few days. I can't wait until Rocky gets used to…
Continue

Last year June 13th was the day Jeter came into our life.
It's been a wonderful year with him so yesterday we celebrated his first anniversary.
His day started early with his usual weekend-5 mile-morning-run with us on the forest trail.
After coming back home happy and a little bit tired, he had a short sweet nap while we went out for brunch.
When we came back he watched the Yankees game with us.
Then we took him to a pet shop ("doggy style") and got some… Continue

Vacation is over, but we're glad to have our little boy back

We went to Virginia Beach for the week and took Murphy to Chris's aunt and uncle's house. They have two dogs so I knew he would have a great time playing with them. We had a great time at the beach, but every time we saw someone with their dog, we'd always say, "Murph would really love it here." So, we decided that the next time he'll definitely be coming with us now that we know its a dog friendly beach. We missed him so much. We're glad to have him back. We called his aunt and uncle every… Continue

So summer is here.. one of my favorite time of the years~

I just got myself a hair cut~! I love it~

Ace is in love with his pool and now runs THROUGH it of course leaping over the sides... but it is a fun thing to see~

he was scared of the pool at first since i got him in January... and there was no way in HELL i would put him in a pool then LOL... anyways.. he was scared of it at first but i coaxed him in with ice cubes.. i wanted him to know it was a good…