Question about Cats and Corgis...

Loki attracts cats. Cats LOVE him. When we go for walks, neighborhood cats run out from under cars and behind trees to greet him and rub against him. He is rather indifferent to these "stranger" cats; not hostile and not welcoming. When we go to the pet stores that sell animals or have adoption days, the kittens and cats try to get to him through their cages or want to play with him through the glass... It is REALLY strange.

So Faye is almost 14 weeks and is the light of my life. When I get home she has a big smile waiting for me and tons of corgi kisses. I don't want to personify her too much but it makes me wonder... does that smile mean she's... happy? Do dogs feel emotions like happy and sad? I can't imagine that it's the same for them as it is for us but at the same time... it's a smile! Just something to wonder I guess.

What IS my dog?

I've been trying to figure out what exactly Wrigley is for the last few months. I have had several people tell me he is just a big Corgi (and not show quality), I have had people tell me he looks like a Sheltie (I don't think so) and a few people told me he is just a poorly bred Corgi (I prefer "unique" so his feelings aren't hurt). He is about 35 lbs and seems to be about the size of a Beagle (I haven't seen him next to a Corgi yet), but much broader. I have tons of pictures of him on… Continue

Meet Wally, the newest addition to our furry family. Unfortunately, he's not another Corgi!

Hello fellow Corgi lovers! I have a few friends who have created a new website and I though I would share it with all of you. Its a funny site designed to add a little humor in our day to day lives. Check it out and pass it on!

I am going to try and have a few of the calendars for prizes at the Corgi picnic, hope to see you all there.

Randy is having his surgery tomorrow.

Wow they grow up so fast. Randy is going into the hospital tonight and having his surgery (neuter) in the morning. I will be glad when it's over and I get to bring him back home. Leaving him there is so hard and waiting for the call that all is well. I will be praying until I get him back safe and sound. It's gonna be interesting keeping him calm and quiet with his big brother around but I'm sure we will manage.

Who uses a doggie backpack during walks? If you do, what kind do you use, and where did you get it?

Update on our special needs girl

A little over a month ago we adopted Poppit a one-year-old blind red-headed tri Corgi. She spent her first year with very little socialization and lived in an outdoor kennel. After a month in her forever home, she is my velcro girl. She plays with reckless abandon when the others are willing and if you didn't know she was blind you would have trouble knowing that she was any differeent from the rest of the pack. She has mastered the front steps..both up and down. She has memorized the yard and… Continue

It seems I never have enough time to spend with my babies. When I get home from work I can't wait to give them a big hug, and lots of pets. Then we play fetch with the pink squeeky ball. So even if I spend all evening with them its not enough time. Do you think if I call in sick on Monday so I can stay home to hug my babies my boss would understand? I love reading and seeing all the great pictures. It really makes me smile! Keep up the good work. Teresa, Winky and Blinky.

THE STORY OF DOOLEY - TRI-COLORED FLUFFY

"There is a character named Dooley in the Mitford Series by Jan Karon. He is a young boy that is given up by his mother, comes to live with a pastor, grows up to be a fine person. This elderly woman, Miss Sadie sees the potential in Dooley and sets up a million dollar trust fund for him when he reaches 21. You ask where is this story going??? You saw the potential in this dog and gave him a new lease on life, which is priceless."

So I bought Penelope a "Corgi" sized crate and she's too big for it. Really, she is just too long for it. She looks like a corgi pretzel. I bought her the next size up and it's huge! She fits length wise but it looks silly how tall the crate is. I just hope she doesn't go to the bathroom in it. She has lots of extra room now so we'll see.

I just found MyCorgi.com. I love being able to talk to and hear from other Corgi lovers. Because until you have had one wiggle there way into your heart you can never know how precious they are. I love reading all the stories, and all the happiness I can hear in the way everyone writes about their babies. Keep writing and posting pictures, (the pictures are so wonderful, they make me wonder just how many corgis are too many). Thanks! Teresa, Winky and Blinky

So, ever since I have had Wrigley, I have been unemployed and basically, a stay at home dog mom. I love spending the day with my boy, but I recently found a job I am starting on Monday. I feel so incredibly guilty leaving him. I left for just a few hours today and came home to him just sitting on the couch looking bored. Luckily, I will be able to come home for lunch to take him out and refresh the water bowl, but I will miss him so much!

Any advice on how to cope with our first real… Continue

I know this is random but do you know Why?!

Hi gang!
We have little Harmony at last. She is, officially, Allegro Good Luck Charm and we are keeping her call name as Harmony. It fits her perfectly. She was just a dream on the 7.5 hour ride home yesterday. I, of course, took pics of every "first," even her first poop! I know, crazy. I'm sure Patti will send along tons of pics, but I wanted to share this one with you.…

After getting a shot today for nausea, he still wouldn't eat the lamb and rice canned food the vet sent with us. He snubbed cookies, but in the afternoon ate some Ice cubes. Finaly at dinner I cooked him some lean meat and rice, and he ate! Not with his usual zeal, but he has kept it down. We took a slow meandering walk tonight, and his spirits seem to be improving some. Thanks for your support. Only my fellow Corgi lovers can know how much my old dog means to me, how many tears his warm fur… Continue

And there she is!

Thanks to the Cartwright family my search for a puppy has ended. I spoke with Lacy, who is very helpful with informing me on how the processing will play out. Her name is Clover, but will be naming her Chloé. Here is a picture taken from the Cartwright website. 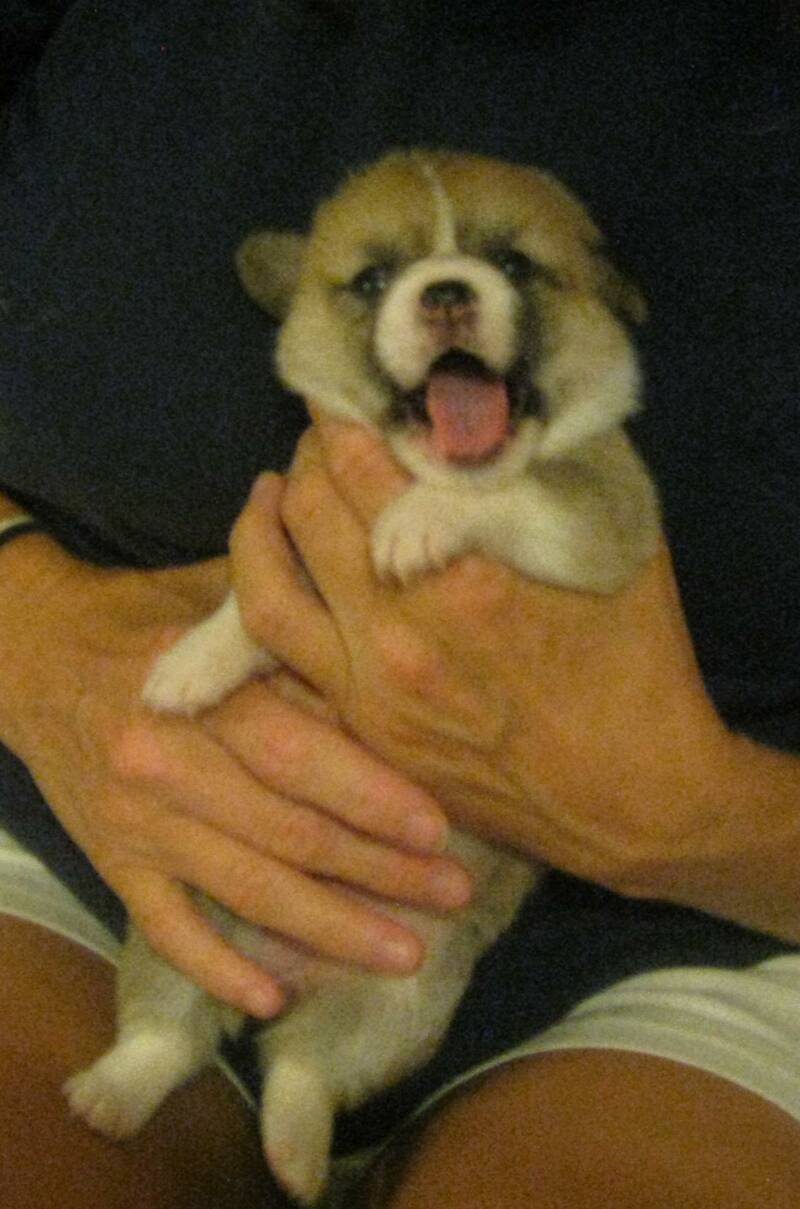 Harley had his second vet visit yesterday (since we bought him). He is now 14 weeks old, and was due for his last Parvo and Distemper shots. We had already suspected that Harley is prone to car sickness. He had never thrown up during the car ride, but a bit afterwards. We always feed him at 7 AM, and we leave for work at 7:30. My boyfriend, Evan, takes Harley to work with him 3 days a week, and Harley had once gotten sick a bit after they got to Evan's office.