The corgis had a great time until the rain and lightning spoiled their fun! Ah well, looking forward to next time!… Continue

Hooray for Maddie! She passed her CGC/ TDI test tonight. Now I just need to fill out some paperwork, get the vet to sign off on her medical records, and send in for her ID tags.

She was such a good girl! She had to work very hard for this. Concentration does not come naturally to her. Thank goodness for the "look" command (one I never used with Jack) because I had to use it about a half-dozen times in the test tonight. There were people out in the hall and she didn't want to sit, she… Continue

I am updating from my phone so this will be shorter. I got to see Callie again today and was thrilled to see the improvement. She walked out to see me and was so excited she tried to jump up on me. They told me it was time for her walk and I could take her as long as she came back within a few minutes. We strolled around the building and she just kept giving me the 'i love you so much' look.
You wouldn't have been able to tell she just had a major surgery. The vet said she ate some and… Continue

We just got back from the vet, and it's not good. I posted a discussion about how last night, in mid-stride, Sidney suddenly yelped in pain and would not bear weight on his hind left leg. Our vet took xrays and he has very severe hip dysplasia. His femur on the left side is completely out of what little hip socket he has.

Right now he's on Rimadyl for pain, and he's to be getting glucosamine to help build cartilage. He's acting normal and happy, but won't put weight on the bad hip.…

ok so murphy is 8 months old. he use to be potty trained and now he is starting to poop in the house again when im not around. He dosent ask to go out or use the #2 while he is out. is this just a stage or is something. how i retrain him again.

Today is the day! In fact as I am writing this as the are getting her ready to go into surgery.
I've had a long weekend with little sleep because she had to go out about every hour to go potty. But this morning I woke up to her being as playful as ever. I think that the antibiotics are starting to work. It just made me so happy seeing her run around like crazy and constantly squeaking her toy like she used to. (And she can squeak toys for hours)

The vet called me and they are… Continue

Monty and I are settling into our new home, a townhouse in northern virginia. It was a little crazy for Monty but he is definitely getting used to the new digs and my new roommate has showered him with lots of massages. We also have lots of new trails to explore.
We will also have a new schedule as I am now very close to work. Now three days a week instead of going to daycare while I am at the office he will be staying at home with lunch visits from me. I get to work from…
Continue 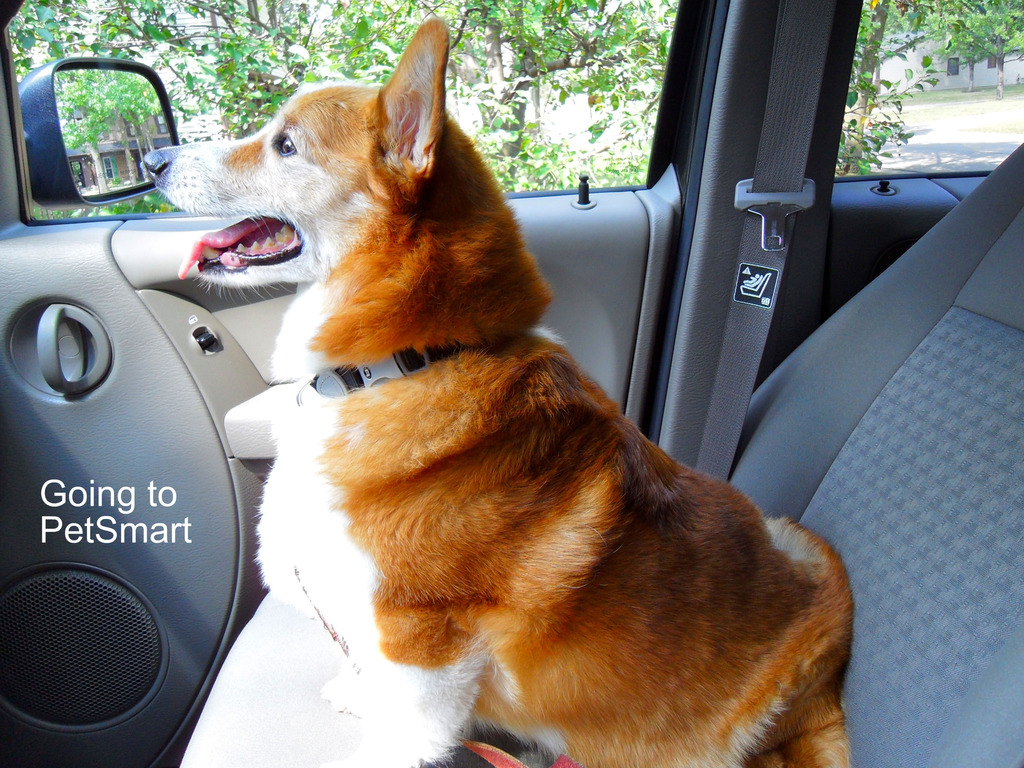 Sidney and I are members of the San Diego Corgi Meetup group, which has huge meetups once a month at different locations around our county. The August meetup was at Balboa Park, in downtown San Diego. It's a huge, beautiful historic park full of museums, gardens, bridges, ponds and even the "World Famous San Diego Zoo".

This was our first visit to the Balboa Park dog park. I let Sidney off leash once we were inside the gate, and I wanted to see how far the park went (I could not see…

I have loved my calendar this year-- I was just adding things for September and looking at the three lovely Wendt Worth corgis. I have one at school and one at home. Will there be one this year?

I have a year old Pembroke named Darla. She is friendly around the house, company, and other animals. She would be so perfect if she would stop biting and chewing. She has ripped a hole in my couch and pulled all the stuffing out, chewed the carpet, walls...etc. Latley I have had a really hard time taking her to be groomed and to the Vet. In the first year, I never had a problem taking her to these places. I had her nails clipped the other day and she bit the groomer. I took her to the vet… Continue

so proud of my torque

well, today i took torque to another car show. i left lowlow at home as i wanted to have some bonding time with torque & it is easier to train/manage one dog at a time. any ways it was torques turn this time & she has been doing so good with clicker training & following commands, that i decided to put her to the test. i put her leash on her & held the leash in my hand for a few minutes just so she had the understanding that i wasn't setting her free to the world but she could go… Continue

Peckie my 2 year old Pembroke loooooves to be outside. He will come in the house when I hold the door open for him and call his name....EXCEPT....if I am about to go to work for the night and I am in my navy blue scrubs (I'm an ICU RN) and it's 6:30pm. It doesn't matter if I have a t-bone steak in my hand. He slinks away and hides under the butterfly bush. He then rolls on his back and pees when I come to get him. I then have to pick him up like a baby and carry him into the house. Anyone have… Continue

Callie has been showing signs of a UTI for a couple of weeks and we took her in and she got antibiotics. Last night she had urine in her pee and she's still be unable to control her bladder. (She's hasn't been on antibiotics for very long) We took her in again this morning and they took some x-rays and they found a mass in her lower abdomen. Her blood work came back normal and all of her organs seem normal so the vet isn't quite sure what the mass it, but she doesn't think it is cancer. The… Continue

Corgi in Salem, OR needs foster or permanent home!!!

Jackson's birthday is today! He is turning 4 years old, WOW! Time passes by so quickly, it seems like we just got him yesterday!!

Never posted here before. We love all our dogs. Kees, Tug; JRT, Stuart; JRT Minnow; and Corgi, Truman. All are fine. Tug is king and leader. Minnow if female and best friends with Truman. Staurt and Tug are best of friends. Then we have Truman and Stuart.

We work to take away the anxiety by letting them all know we are in charge and all they need to do is relax, have a good time and know they are loved and cared for. Their job is to get along. We monitor tempers and time outs.…

"Thank you" to those who adopt rescues and rehomed dogs!

I was just thinking this am, how lucky I have been in finding great homes for my rescues and for Rainy who was one of mine that I rehomed. Rainy has the perfect home with the perfect situation for her (she is now a princess with her own family) and doesn't have to "share" with any other dogs. Calvin, Mariah and Rosie have been adopted by great people and Jackson will hopefully find a home soon! I appreciate all the people do to take the sometimes "less than perfect" dog and give them love…

So I live in SWFL and I already have a pembroke but my fiance and I are looking into getting a Cardigan too. Anyone know of any breeders in SW FL.. :) Thanks

Thanks so much for the warm welcome. Although I'm an experienced Corgi owner, I'm new to MyCorgi and the web. I have a ten year old female Cardigan named Annie...who is Mother Teresa reincarnated. I also have a three year old male Cardigan named Rhys. He's been through four obedience/Agility/Rally classes but is still an idiot. I love my idiot though, and the three of us go everywhere together. I've attempted to attach a photo of my two, with a foster buddy...hope it works.