I got this from a friend who is a "Dr.Who" fan and knows I am a corgi lover. I wanted to share with all as it brought a smile to my day.Just  more proof that our pups really are versitile actors. But we already knew that, didn't we?… Whew, tomorrow will be an exciting day! My husband and I are getting up early to make the drive from Tampa to Lecanto to meet our baby boy Regi! I know he's only two weeks old, but I just can't wait to see him and possibly hold him. The pictures our breeder has been sending us are too cute! He has lovely black and white coloring, though I don't notice any brown yet. His mother, Blue, is just lovely and has the sweetest, smiling face. I'm so stoked!

Kaylee had her second full day at a daycare facility today. So far they've been great for both grooming (fluffies need some extra care) and giving her a place to hang with other dogs. It's hard to be sure about what would have happened if we hadn't walked her so often on campus to meet people or taken puppy kindergarten, but she has blossomed into an extremely social and energetic 9 month old. From what the people there say she both an unusual cardigan and a bit "crazy" (in a good way).…

A moment of pure love

Sammie is half corgi half lab. She looks like a corgi with a lab face. She is full of personality like a corgi but yet she is sweet and calm and gentle like a lab. I am and early bird... I get the dogs out of the kennel at six and they are out all day till late at night either playing with eachother or running around in our extremely big back yard. Well to get on with the story... I got the dogs out at six like every morning but something switched in Sammie. She was so loving this morning. I go… Continue

If you have not read Bruce Cameron's two books "A Dog's Purpose" and "A Dog's Journey" I highly recommend them.

He has written a poem that brought tears to my eyes, I wanted to share with you. Grab a tissue. 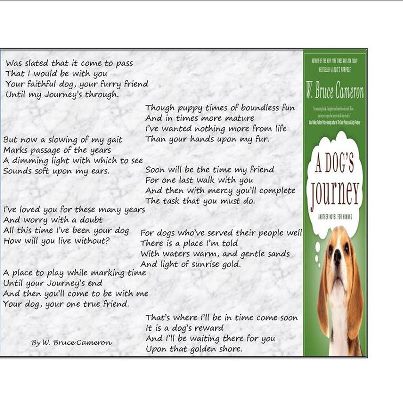 Was slated that it come to pass

That I would be with yu

Your faithful dog, your furry friend

IO is a HoneyFox corgi born on June 16, 2012. If you or anyone you know has a puppy from that litter I would love to get in touch with them. Being able to commiserate, talk about health issues as they come up or even arrange play dates would be valuable.

I want to introduce everyone to IO (named after the moon of Jupiter). Here is a pic of him being super cute! You can see more of him on his web site iothecorgi.com 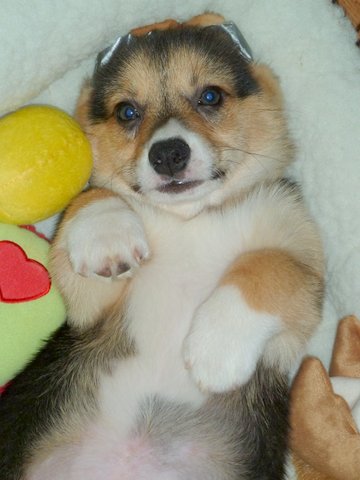 Saturday night started off wonderful~
Ace and I were out at a friends house and we were watching movies and chatting.. then suddenly this horrible pain shot into my side and wouldnt stop.. it ended up in me loosing everything i had ate several times.. the whole while i hear ace sniffing the other side of the door and pacing.. i told my friend i was gonna go take a shower in hopes it would feel better.. Ace fallowed me up stairs and i never made it to the shower.. instead i laid on the…

My second dog, Hershi is not doing well at all. She can't stand and doesn't want to eat. Mom called me and made a vet appointment for tomorrow. So if the time is not today or tonight she will be on her way to rainbow bridge tomorrow morning. Kinda glad mom picked today to tell me because I am home from work and can hug Scout extra close all day. Prayers for a comfortable last few hours appreciated.

I had a headache Wednesday evening, so my husband volunteered to exercise "my" dog. (we rib each other about each other's dogs) A little later he came in and said "I'm sorry, I broke your dog" , and here she comes, on 3 legs. Fortunately, I regularly read posts on MyCorgi and so knew that it wasn't a rush to the hospital injury. We took her to the vet today (Friday), and he gave her a shot and put her on an…

SAVE THESE PUPPIES LIVES'

We have 4 precious babies fighting for their lives with Parvo. They are getting wonderful medical care, but their vet bills are going to exceed $2000, money we don't have. While everyone enjoys looking at photos of cute puppies, this is the sad reality of rescue & Cuddly Canines cannot continue to survive without donations. Please help us help these babies by clicking on the ChipIn link & donating to their care.…

What would be fair to the dog?

Currently, I have been thinking a lot about what I want my dog to be: an agility dog, a service dog or just a normal family pet... And the other question to me which I think I will never have the answer is what kind of dog my dog wants to be...

I have been with dogs for a long time, but neither none of them has been trained in certain way, nor was provided the opportunity to be trained or even exercise, due to lack of knowledge of this in my hometown. Though they looked happy to me… Continue

I was just looking at my blog when Chloe was having a terrible itchy time, & I can't believe it was a year ago! Now I'm just starting to realize that perhaps she has seasonal allergies. The weather here a few weeks ago was HOT! She has this funky rash on her private area and under her armpit. I'll attach pic of her front armpit (her genital area is the same color like the armpit; it wasn't that way previous to this rash) She swims 2-3 days a week at the beach. I'm…

About the Worst day Ever

And Ziggy is what I have to thank for being able to get through it. Well, friends help too, of course.. But Ziggy is what makes me able to ignore the stomach twists and focus on something else for a while, giving me a much needed distraction. I love his big ears and little legs and tailless hiney and his overbite and everything about him. He's an instant happy source.…

Patti's got to go back to Oahu (Waipahu) because of a family emergency.  For those who don't remember, Patti is an Iraq War vet with PTSD.  She has a service dog, but we are concerned that with the time line we will not have a way to send Harmony with her.  Anyone on here in Hawai'i who can help us with what is necessary to get Harmony into Honolulu with Patti.  Or if you can be a contact for her while there to help her out.  Please get ahold of me on Facebook …

We returned from the vet not too long ago.  What we thought was a hurt paw is not.  The reason Chloe yelps once in awhile is because she tweaked her back.  This could not have come at a worse time.  Chloe had her teeth cleaned last Friday so she was under sedation.  Friday I got the call that my dad was on his deathbed so my husband had to pick Chloe up.  Chloe was still somewhat under the influence and tried to jump up on her chair-a leather recliner love seat, well she missed and…

I make the dogs a scrambled egg several times a month, and Jack always gets very excited when he sees me making eggs.  (Maddie gets excited when we do anything, anywhere, at any time, so it's hard to see a change in her behavior).

Apparently, he associates the frying pan with the resulting egg dinner, rather than the carton of eggs.  Today I had one egg left that was hitting its expiration date, so I decided to cook it for the dogs.  Since I was not making any for us, I just…

quick update on helix and emi

its been a little over a month since little helix entered our lives. its quite funny how things work out sometimes!

emi has always been quite the diva and brat ever since the day we brought her home. she is definitely a very headstrong girl, and is sooo stubborn! it doesn't change how much we love her though!

helix turned out to be such a sweet boy, the complete opposite of emi! hes more calm and doesnt always try to attack everyones face, but he also does not trust very…

Normal puppy behavior or not? HELP!

So it is the one week marker of my getting my Dilly Dog and I am getting a little nervous about how nasty she can be sometimes.I understand it's still new for her and she is adjusting and such, and I originally thought it was just with food that she got a little aggressive. But it's becoming a little more often now. When I pick her up she snarls and nips at me. She plays REALLY rough for a 9 week old puppy. And when she met my neighbors 7 week old puppy, she was really nasty there too. I…