The Furminator! I finally decided to order it last week as Hannah has started shedding pretty bad lately. Tore it open and got to work. Amazing! No brush can possibly compare to this thing!

I don't know, after the fiasco yesterday I've been seriously considering Milo. I love the boy--he's the best dog I've ever had the pleasure to be with in my short life. He's got the best personality and temperament that I could do anything with his food and treats and whatever he happened to have in his mouth and he doesn't mind my questing fingers to get it out.

But there's a catch--he's got to get along with our unaltered Weim. That's the one catch from the boyfriend, which I… Continue

Just got back from Alaska. Eddy's safe and sound, but huuuge! He got a lot of exercise. But I'm pretty sure he received no discipline, at least, he sure is acting like it.
3rd shots are due this week.
My sister said she thinks he has a flea infestation... but her dogs are on Frontline Plus, and Eddy is on Sentinel... sooo, unlikely, right? I'll have to flea-comb him before bed.
Ahhh, it's good to be home! I Heart Portland.

I'm not frustrated at Milo at all (except when he goes to bark mode and that grates me a little bit at times.) It's more about the people I'm fostering from--they are driving me crazy. Actually, they've been driving me crazy from the get go and I was hoping it would improve but it is only get worse with time.

Initially, they gave me wrong information about what was wrong with Milo. They also told me to pick him up at the vet's office, which despite me calling they never picked up… Continue

My weekend with Matt went great! Missed our daughter but we had lots of artwork done of her! Apparently Maui had an absolute BLAST at her breeder's place with one of her older sister's, Fiona. They played till they passed out, they romped and frapped, and I see that maui underwent a growth surt while we lef! Poor thing looks like she needs a sandwich but I know whe will get that way from time to time as she grows.

She missed her $95 bed, and her 2 feline brothers. But at least this… Continue

We are so proud of our little Sidney! He passed his Therapy dog test after 6 weeks of classes.
Now he just has to complete 10 hours of supervised visits and he will become a fully certified therapy dog!
Since my daughter is Sidney's handler, she will probably start with the visits after she graduates in June.

Here is Sidney in his official "Therapy dog in training" bandana: 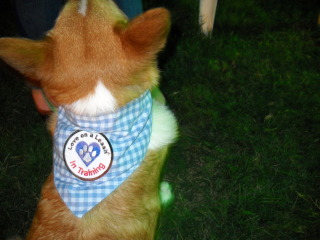 Waiting to be called to receive his graduation… Continue

My first week went off without a hitch... I actually discovered a few new bus routes we can take to minimize the load on my back when I was carrying Dash in his Sherpa in/out of the subway. It's actually pretty nice since I have to backtrack less, the timing is pretty similar to the subway, and he gets even more opportunities to hit the dog runs before and after my work. Having Dash on my own actually whipped me into better shape in terms of getting to work on time haha!

I handed off… Continue

When I got home from work, I took him outside, then brought him in and gave him his dinner. I took Josie outside while he was eating.

I get back in, and there's this THING in his food dish. At first I thought he had thrown up in there or something. Then I look closer -- it's one of his SQUIRRELS!!! He finished all of his dinner, and then put one of his toy squirrels IN HIS DISH!!!!

Not sure WHY -- unless he's saying he wants squirrel for dinner! He's such a little goofball!

We had beautiful weather this weekend and decided to take a hike out in Rattlesnake Canyon. No, we didn't see any snakes (did see their tracks across the trails, though). But on the way back out of the canyon, Sidney suddenly started rubbing his head against the ground and whimpering. We checked his ear out...we found a small cut on the tip but that was all. We figured that was the cause and, upon arriving at home, we cleaned the cut and put some salve on it. However, he kept shaking his head… Continue

So I took Henry out today to meet a friend, and we were standing outside talking and a couple came by with their son who was maybe 4 or 5 at my best guess. I was holding Henry in my arms and the kid was standing there pointing and smiling at him and then I felt him hit Henry on the stomach. And then I looked down at him and he hit him again, this time harder! And I said, "Uhhhh, don't hit the doggie, you have to be nice to him and pet him nicely." And what were the parents doing this whole… Continue

Adventure at the Dog Park

Over the weekend we took Finnigan to the dog park to burn off some energy after being cooped up all week while we were at work. He had a great time and met some fun dogs including two huge Great Danes who slobbered all over him. Once he finally seemed worn out we went to leave and as my husband was putting him in the car he saw something from the corner of his eye dart under the car. I got down on the ground to investigate and sure enough there was a tiny baby Quail under the car. He was so… Continue

Hi all,
I don't blog much but will likely start doing it more now that I am single again. My boyfriend and I have decided to part ways as we don't want the same thing right now. Unfortunately this means I need to find a new place to live. I want to stay in the DC area but the only area I can really afford that is part country/part city is Frederick, MD. I tried looking for a townhouse but my price range means there is not a lot available that allows pets. I still have hope but might have… Continue

This is not Corgi related but I wanted to reach out and ask that you send your prayers and good thoughts to my father Eli. He was diagnosed with cancer and the odds are stacked against him. He is currently trying to recover from two surgeries and become well enough to leave the hospital and start chemo. He's been in the hospital for a month now and it's been difficult for him as well as the rest of my family. The doctors have given him a year or two to live and the chemo will help but cannot… Continue

I just had to talk about how funny it was to watch the dogs yesterday while we were doing yard work. We rototilled up about half of our yard to plant some grass seed and KC and Levi thought it was so nice to have some nice cool dirt to stretch out on and cool off. Taz surprisingly was not involved at first; he was hiding in the house. Then he came out and you could just see him looking at all that dirt going "oh boy", he is the digger in the family. We haven't figured out where he puts all the… Continue

So over the past days I have welcomed a furry little angel into my home. I thought I had my puppy proofing sealed tight, but I quickly learned otherwise.

Sweet little Lola was my birthday gift, and what a wonderful gift she is. She even came with an additional present, fleas! I can't be too upset because she came from a farm and is healthy overall. Called the vet and was told to try a dose of capstar and frontline. She seemed to have improved greatly. It breaks my heart to isolate… Continue

Our decision will be made this Sunday...

Well, I thought I'd update the Mycorgi community on our decision to get a new pup. After a long back and forth talk with the breeder, she has finally made it evidently clear that she'd really like us to take this pup. So we have decided to bring Kiwi down to her house this Sunday to meet the little guy. Sunday, we will have our decision made. I'm a little nervous, not about how Kiwi will be, b/c I'm sure she'll be great, but more about re-doing the whole puppyhood thing...sigh...but you can… Continue

Everything happens for a reason...even if it's everything at once...

So to make a long story short my boyfriend in on vacation to the Philippines and he decided it was a good idea to get a girlfriend while he was there thinking I would never find out, but I did and now and moving out. Apparently 5 years means nothing to this jerk! haha Anyways I'm over it and I have until he gets home Wednesday night to move out so I never have to see him again, because he is pretty crazy! I am trying to run away and leave him a note saying you made the choice please dont try to… Continue

I just wanted to say thanks to all the folks who welcomed me here, I already know that this is a great site!

Miso Soup actually hasn't come home JUST yet. She'll be here on Saturday! I've waited a long time to get our girl (been waiting 2 years to get a dog!), so obviously I'm excited!

We had to wait to bring her home, as we just moved into a new apartment (with no pet deposit)! I have everything prepared for her. It's very nice, because we live in short distance from… Continue

Yup, two nights ago, Simon figured out how to open his crate. I found this out when he barked at 1 a.m., and I turn on the light, and there he is, standing by my bed, all proud of himself! :)

So now there's a LOCK on the crate -- and he's all mad cause he can't figure THAT out!

I can't get over how SMART my puppy is! He's already going to the door to let me know he has to potty! He's only 8 weeks old!!!!! He doesn't do it ALL the time, and does still have accidents, but he… Continue

Fargo turned 1 year old on Friday May 8th. I can't believe how old he is. Having him in my life can sometimes be a challenge, but it's one of the best decisions I've even made. He's such a good boy and is really a happy dog. He could be better trained (hangs my head) as his listening skills are lacking at times and he tends to be a bit over zealous when he sees other dogs and just wants to hardcore play, but he's so smart and such a lover.

He loves to fetch, though he hates to give… Continue