Met up with John and Angela, and their Corgis Dora (Cardi) and Dylan (Pem) for a hike at Red Top Mountain State Park, where we had not hiked before.  Other friends had told me there was a 6-mile trail that was nice so we set out and it took TWO AND A HALF HOURS!! Much longer than we intended or expected.  But we made it, and so did our Corgis.  We made several stops along the way for rest and water, and even climbed down to a tiny beach area.  Next time we are picking a shorter…

Today I came home to frustrating news. After a long day of work I came home to find a throw rug hanging outside with a bottle of Pee Pee Be Gone next to it. I knew immediately Nemo must have had an accident.

As it turned out, it was not an accident. It was intentional. Nemo has been ringing a bell to go potty for a couple of weeks and he hadn't had an accident since. Even before that, every accident he had was right next to the door.

My husband tells me that Nemo gave almost…

I thought I would share Tuckers entertaining talent.  Tucker loves to lay on his back with a ball in his mouth and maneuver it with his paws.  He didn't always do this trick,  he started a while ago, but it was only every once in a while, but now it seems to be more and more!!  Now that he has a new squeaky ball and ring, it must be entertaining to him, since he seems to be doing this more and more now, which is fine with me!!…

New addition to our family

Just got a new corgi, Buddy!!

Well, we did it. We scheduled the surgery for this upcoming Friday. Last night Bella seemed fine, played a bit and ran around with the neighbor's dog, ate all her dinner, and slept on the couch like her normal self. She is completely in good heath other than her current problems and being a tad overweight, but hey, her pudge is what makes her squeezable! Anyways, hopefully the removal will be successful and she won't have problems urinating anymore. She is on a strong antibiotic for…

Bella is extremely ill at this time....

Bladder Stones. Many Bladder Stones. *sighs* we all didn't see this coming. I am sad to announce Bella may be undergoing a surgery to remove the dozens of ping-pong ball sized stones from her bladder, that caused horrid inflammation in her (lady-part) and on the outside of it. It has caused us both a lot of pain. It is heartbreaking to see her go from a happy dog yesterday where she was playing with little kids at the park, to a mess of a dog. Our hearts and prayers are with her, as she goes…

Tucker has a thing for David's stinky socks.  He mostly likes to carry them around.  I would like to find a replacement toy but my challenge is that Redford tears apart stuffed toys and eats the ears or anything else that sticks out.

Another wonderful time was had by all and the weather couldn't have been any better. This past Saturday, was the Corgi Walk in the Pearl. There were a lot of puppies this year. I'll post more pictures to my page, but here are some pictures my husband took.

1st pic: You have to log the frog pose with the yawn. So adorable! 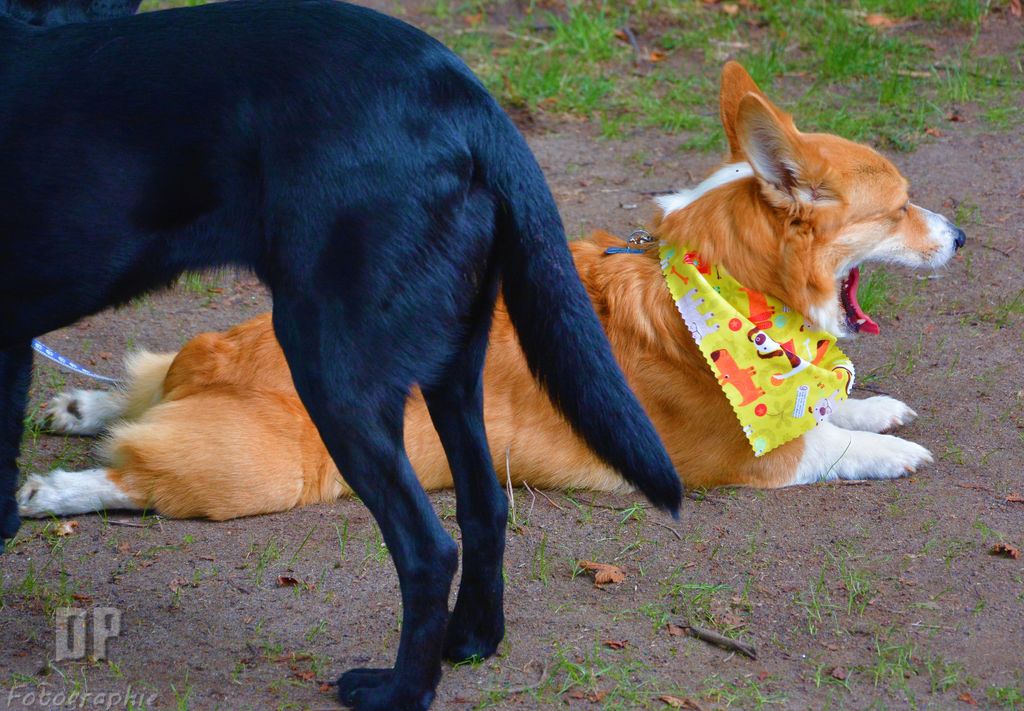 Please Do Not Buy from this Breeder!

My little girl came home with tons of fleas on her, a bloated stomach, and several different types of worms-one of them being tapeworm. She also has heartworms. Luckily I got her at six weeks old but her brothers and sisters are still waiting to be picked up by their owners. I hope someone that is buying from them sees this post. Here is the ebay ad they put up for the puppies.… 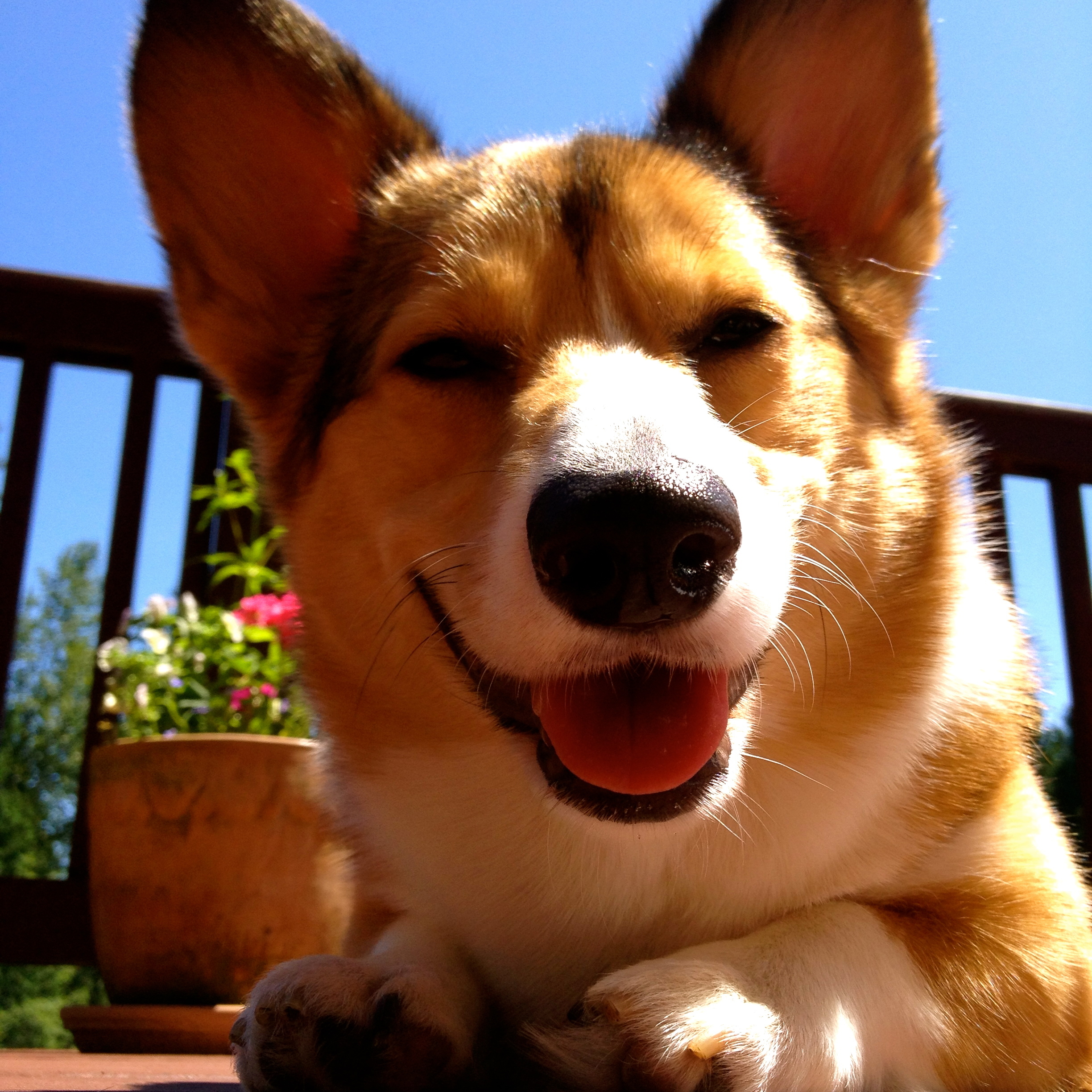 Butters finally got her "squishable" friend! :) 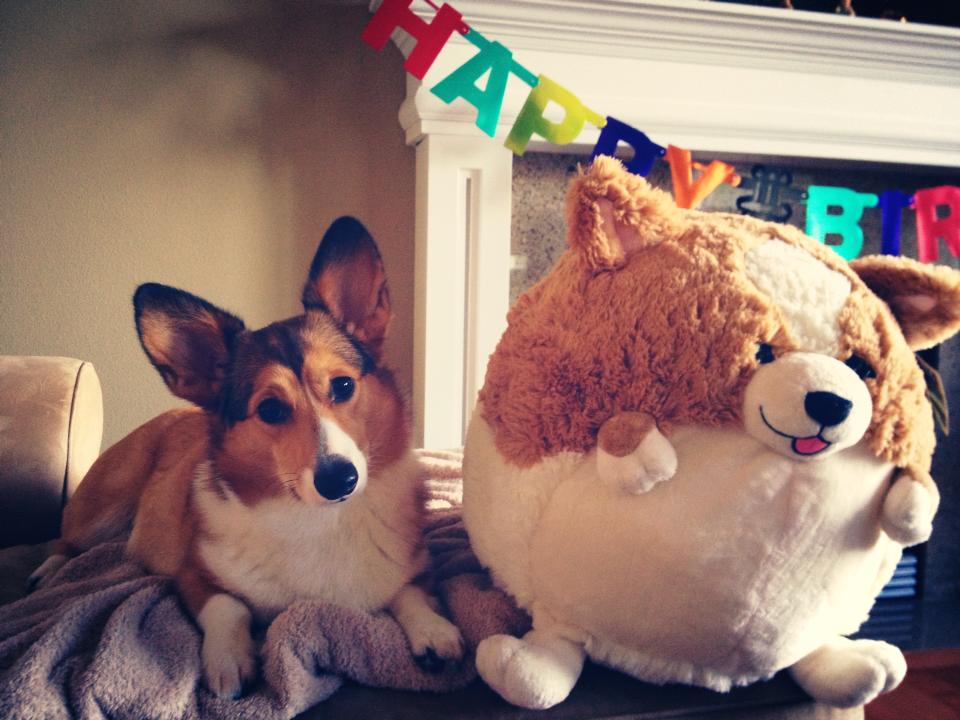 My little girl, at just 11 months old, has been diagnosed with bilateral hip dysplasia. I'm trying to remain upbeat as we work with the neutraceuticals but it just breaks my heart to watch my puppy struggle to get up or limping after a gentle romp on the grass.

I've read many old posts about Corgis with hip dysplasia. However, I wanted to see if anyone out there is struggling with a new diagnosis like we are.

Your experiences and thoughts are most…

Hi all, I was wondering if anyone has used a furminator De shedding tool on their corgi and how well it worked and do you think they are worth it, does it make a difference to the shedding.

thanks for your advice in advance

Did anyone else see Too Cute last night?   They FINALLY featured a PWC with 8 puppies.  I kept in on the DVR, I think I'm going to have to watch it a few more times.... Too Cute

barkbox time! yay! and earlier than i expected, too. it arrived yesterday afternoon, barely any time after we got our shipping notice. as always, this little goober gets excited when he knows something is for him (either that we’ve come home with something special for him from the store or that he’s got something in the mail). anyway, after july’s box being a pleasant surprise, very interested in what this month’s box had in store…

first up in the…

Just wanted to share my blog with everyone. The blog is about spirituality, inspiration, motivation, health and life/personal growth.

Re Ticks on Oscar

I went to my pet store today where a vet works I discussed the tick problem with her she told me to get Oscar off frontline plus ASAP and put him on Advantix for dogs it seems strange that it only happens to Oscar and not Sam?. though Oscar is lower to the ground than Sam & sticks his snout into things more?. she also advised a flea and tick rinse which I can dab on the tick or rinse him with the solution with water. I only ever needed to frontline the dogs once a month now I going to do…

Re ticks any advise

It seems that Paul & I have moved into a high tick area! we took both Oscar & Sam to the local Kurrajong vet the other day and she informed us that the area was bad for bush & paralysis ticks!. Shock horror I almost lost it at the vets I said that we frontline plus both dogs and should I get a tick collars for both the dogs? I understand they smell quite bad?. The vet also recommended a tick rinse that you could dab straight on the tick or rinse the dogs with it!. I'm so paranoid…

My husband and I are first time Corgi owners, and I just have a few questions. Is the circling, biting, barking a puppy thing, or a Corgi thing? And should I expect him to exhibit this behavior always? I read the post about shedding, and I think I'm prepared, but has anyone tried a groomer bimonthly or monthly? If so, did it help? And advice at all would be great!

Nemo has a habit of chewing or scratching on the carpet under the dining room table while we eat dinner. Tonight I interrupted him by giving him a "come-sit-down-stay" sequence. While he was in his down by husband googled whether or not dogs can eat Brussels sprouts. After Nemo's good stay he was rewarded with one.

He immediately went frapping crazy. He raced around the house and played with it for a good five minutes before he finally ate it. You would think I had given him…